After a pandemic summer spent with Warrior 481 stranded sans powerplant in Dansville for several months, my instrument currency seriously lapsed. Since getting back to flying in July, I have logged 6.6 hours of simulated instrument time with 18 approaches representing a mixture of ILS, RNAV, VOR, and LOC type approaches. Special thanks to both Dave P and Tom C for their willingness to mask up and ride right seat with me as safety pilots for a couple of hours at a time.
My final practice session of the year came a couple of days after Christmas. I drove to the airport in pre-dawn darkness, very aware of being fuzzy-headed after a poor night's sleep. Experience has shown that this can either be a recipe for disaster (OK, to be precise, poor performance) or that I'll summon some energy from somewhere and demonstrate ability vaguely in-line with being an FAA-rated instrument pilot. While I waited for Dave to arrive at the airport, I wondered which way the morning would go.
The plan was to launch from Sodus and fly toward Rochester to intercept the ILS-28 there, followed by the RNAV-25, RNAV-28, and ILS-22. Next, I'd fly the published missed approach procedure for the ILS-22 to orbit over the Genesee VOR, then embark on the VOR-A into Canandaigua and, finally, the RNAV-28 back into home. I planned to get six approaches with a hold in the most time-efficient way possible.
Despite being a little mentally slow, the first four approaches at Rochester were really well-flown as can be observed from the nice straight flight paths and crisp interceptions of the final approach courses. I felt like I was S-turning a lot on the first ILS, but the magnitude was small and it tightened up over the course of the morning. While flying one of the ILS procedures, I had the glide slope and localizer needles on the CDI centered so exactly that I found myself wondering, "Is this thing on?" It was!
South of Rochester, the ceiling dropped and we had to improvise our altitude to remain VFR as I stole occasional peaks from under the hood to monitor the cloud bases. Pitot heat went on just in case. I successfully flew the hold entry using just the navigation radio (this requires more spatial visualization than slavishly following the GPS), though a crosswind necessitated a steeper bank than normally desired to intercept the inbound course of the invisible aerial racetrack. This felt a lot sloppier than ForeFlight's ground track suggests.
Crossing back over the station, I turned outbound on the VOR-A toward Canandaigua. Because I was using the navigation radio and only turned onto the VOR-A approach course after observing a flag flip indicating station passage, I did not turn on course after already overshooting the desired track. This sloppiness appears in the above figure where I visibly flew a 10° degree intercept back to the intended 085° radial from Geneseo.
With 13.5 miles between Geneseo and SECKY, the final approach fix for the procedure, I had time to ponder how I could have transitioned from the hold to the VOR approach more elegantly. Using the GPS would have helped. While flying the holding pattern by VOR, I could have loaded the VOR-A approach into Canandaigua, then activated the leg from GEE to SECKY and intercepted that. Alternatively, I could have used radio navigation only by setting my other VOR CDI to the inbound course for Canandaigua and simply intercepting it prior to reaching the VOR holding fix. Working through the thought process for that transition was a valuable exercise.
Once established on it, I flew the VOR procedure well. After tracking the much more precise ILS and RNAV approaches that morning, keeping the VOR needle centered did not require much effort. Good thing, too. I was getting tired.
As for the sixth approach to wind up at home, I think I can fly that one in my sleep at this point.
With my instrument currency refreshed through June 2021, I think that I am well-positioned to make it through the long dark winter when forays into ice-laden clouds are best avoided. This practice session made for a satisfying end to the year. I have no illusions about being any kind of IFR Jedi Master, but I think I do...OK. And at this rate, it is very likely that I will have new avionics installed before I fly another instrument approach in my airplane.
Logged by Chris on Sunday, December 27, 2020 4 comments:

Email ThisBlogThis!Share to TwitterShare to FacebookShare to Pinterest
Labels: Training

A Not-So-Roaring Start To the Twenties
Between COVID-19 and Warrior 481's engine failure, overhaul, and subsequent high CHT troubleshooting saga, 2020 did not unfold at all as expected. In spite of all that, there were still fun things to do and beautiful sights to behold. The goal of this post is to celebrate them while still recognizing the less glorious things that occurred. One way or another, aviation is always an adventure.
2020 In Photographs 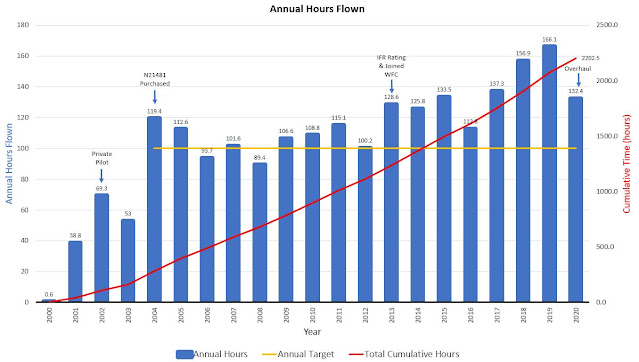 32: The number of airports visited in 2020 across seven states (ME, MI, MA, NJ, NY, PA, and VT). Owing to COVID-19, I mostly stayed in the northeast. There were no new states or provinces visited.
13: The number of new airports visited in 2020 for a cumulative total of 214:
10: The number of people who flew with me in Warrior 481 in 2020, much lower than typical. I have a lot solo time this year because of engine break-in flights and challenges from the pandemic. Thanks to Dan P (to Kalamazoo), Dan P (a different one, to Dansville), Derek S (to Dansville), Dave P (safety pilot), Tom C (safety pilot), Lee S (NYC flight), Ziad S (picnic in Piseco, NY), Jamie O (to Lake Placid), and of course, Kristy and The Bear for joining me on some adventures in 2020.
6: The number of people who took me flying during my time without an airplane. Thanks to Denny A (Piper Comanche), Paula S (Piper Cheorkee 180), Tom C (Piper Archer I), Ed C (Piper Archer II), Brad R (Cirrus SR20), and Jamie O (Searey) for helping me to scratch the aviation itch. This is the most time I’ve spent in other people’s airplanes since I bought the Warrior in 2004.
The Highlights and Lowlights
Lowlights:
Highlights:
Looking Ahead
Aspirations for 2021 include:
Of course, we'll have to see whether these goals are even reasonable or not. It's a dynamic world out there. Best wishes to everyone for a happy holiday and a much, much, much better 2021!
Logged by Chris on Thursday, December 24, 2020 2 comments:

Each year, once the shallow waters freeze over and the first snow dusts the landscape, I love to explore the transformed world from the air. It is a honeymoon period for winter, moments of enjoyment before fatigue sets in.
The Williamson-Sodus Airport was the place to be Saturday morning. I encountered Dan A, Max K, Ed C, Rob L, and Tim F and spent some time catching up with everyone. I planned to range westbound that day, but reality failed to live up to the lofty expectations of the forecast. (Literally, the clouds were way lower than forecast to the west). Instead, I turned eastbound along the Lake Ontario shore where the ceilings were much higher. 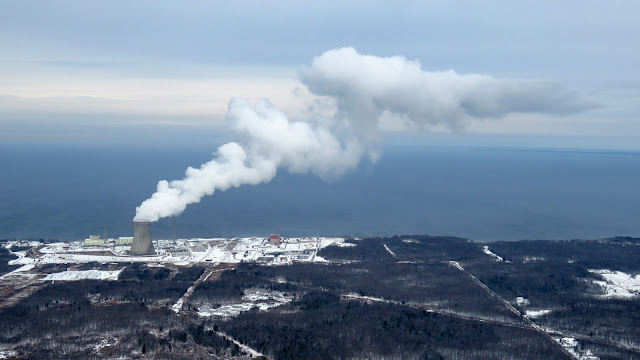 Steam poured from the Nine Mile Point Nuclear Station to form a pale imitation of thunderhead. 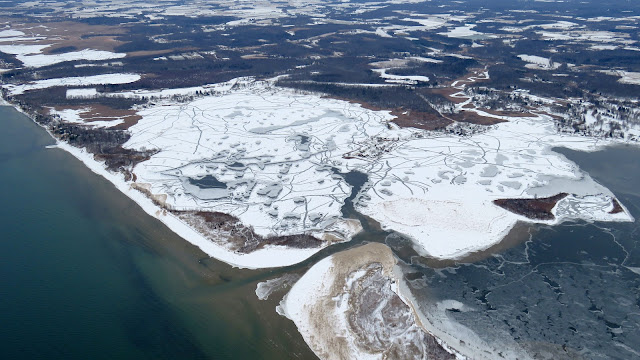 I found curious patterns writ large on the ice covering North Sandy Pond at the far end of Lake Ontario. 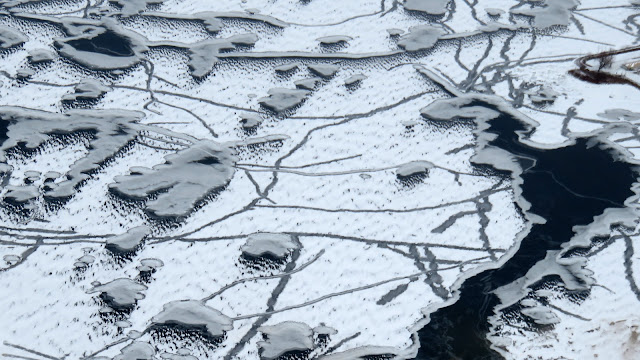 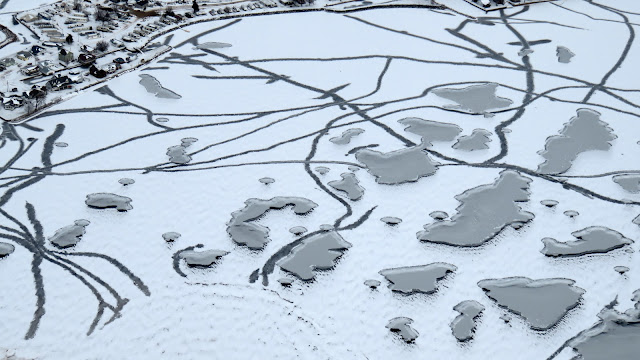 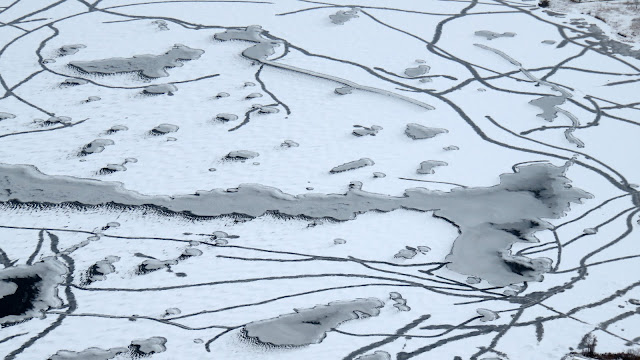 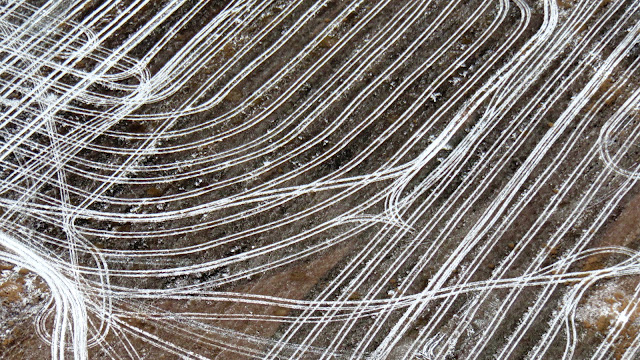 Moving on from the lakeshore, I flew north of Watertown and observed these patterns etched into the soil and accentuated by accumulated snow. 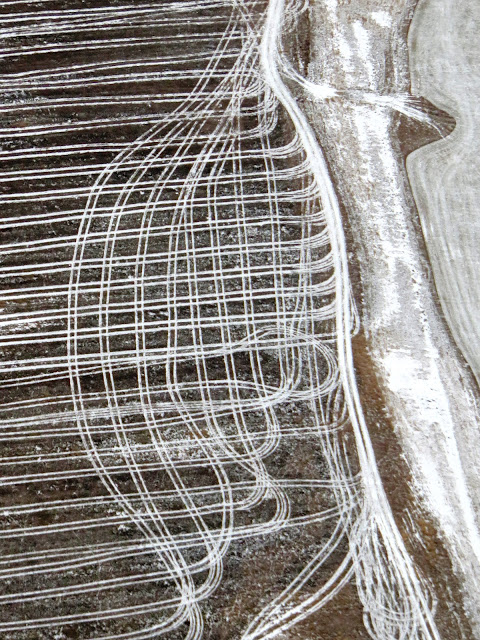 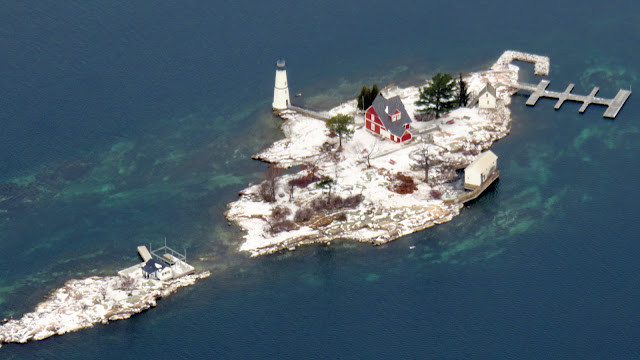 Over the St Lawrence River, I found the Rock Island Lighthouse. 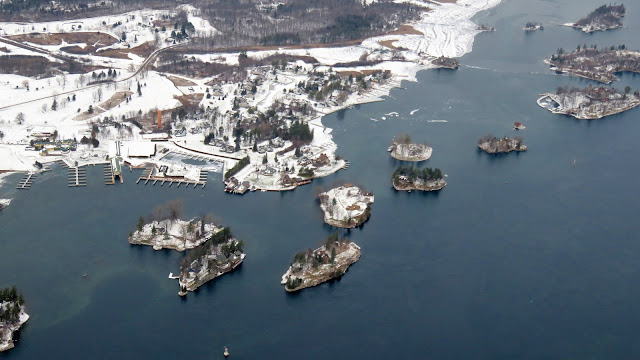 I continued eastbound over the Thousand Islands toward Alexandria Bay. 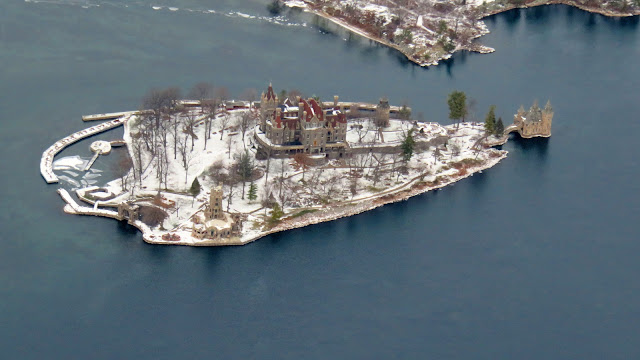 I found it impossible to resist peeking at Boldt Castle. Even in the winter on a leaden, overcast day. I circled once. 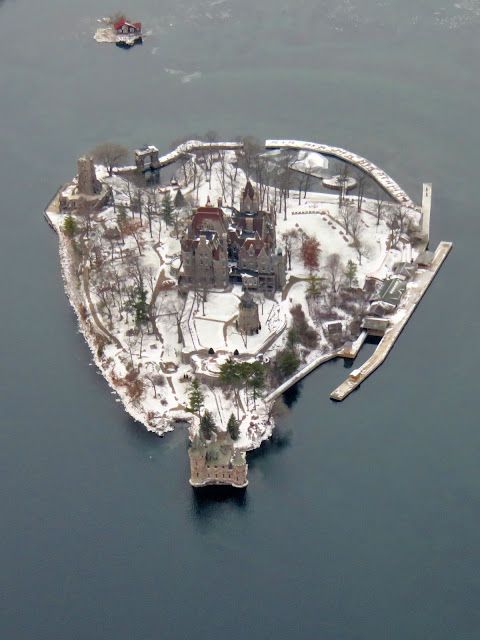 On the bright side, the loss of foliage reveals details of the property often hidden during the warmer months. 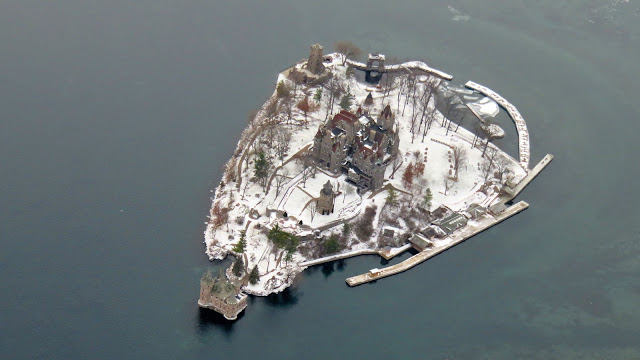 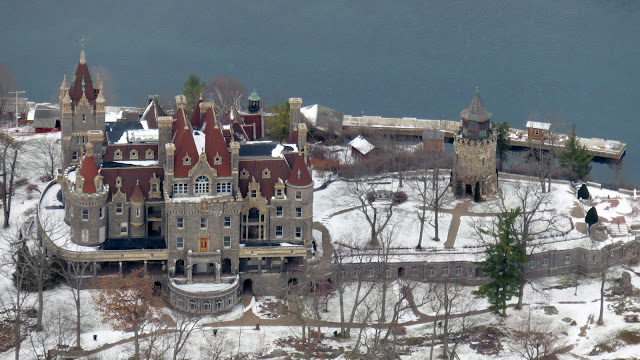 Sure, it's a nice place. But who would want to keep it clean? 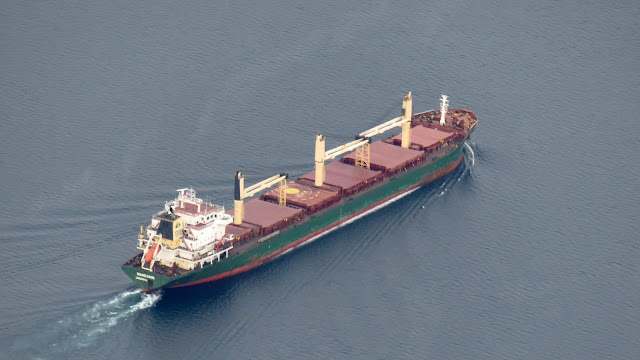 A freighter caught my attention and I followed it eastward away from Alexandria Bay. Of course, a 125 knot groundspeed meant that I could not follow it for long and the chase was over as soon as I caught up to it. 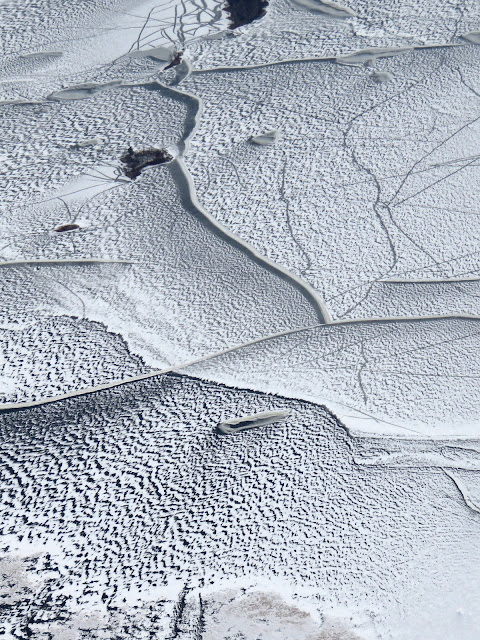 As I flew over the flat country between the St Lawrence and the Adirondacks, a plan formed. I decided to land at Malone-Dufort for the first time because it was nearby, then head south to Lake Placid for lunch. Per NOTAM, there was no fuel available at Lake Placid, but I had enough to reach Griffiss International from Placid with an hour left in the tanks. After topping off at Griffiss, I would head home. 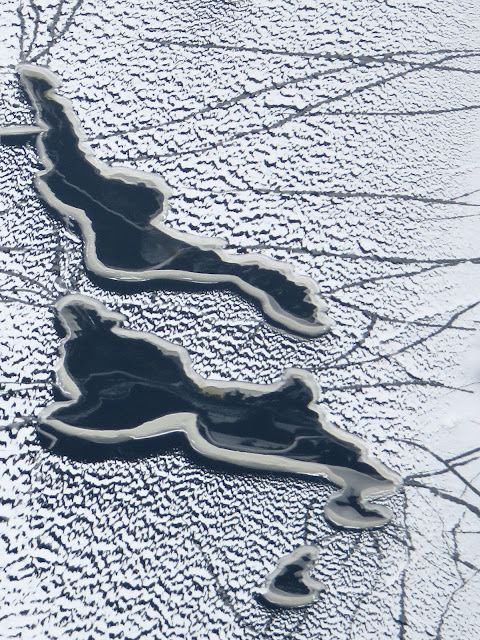 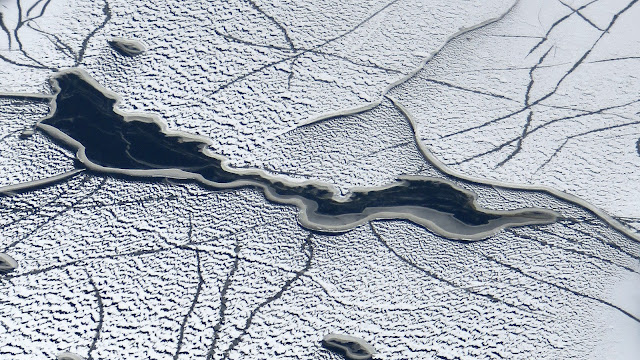 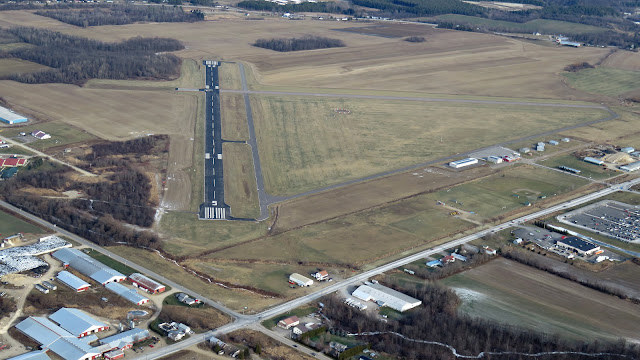 Every time I keyed the mic to say "Malone traffic", a little voice in my head wanted to enunciate "Malone" like Kevin from The Office. I encountered some air traffic at Malone (airport #214), but there was not much going on at the airport proper except for a woman walking her dog. We exchanged waves as I taxied to the ramp and again when I departed after finding the administration building locked. (And thus the restrooms as well.)
From Malone, I flew nearly due south to Saranac Lake, then turned to a southeast heading for the descent to Lake Placid through a notch in the terrain. 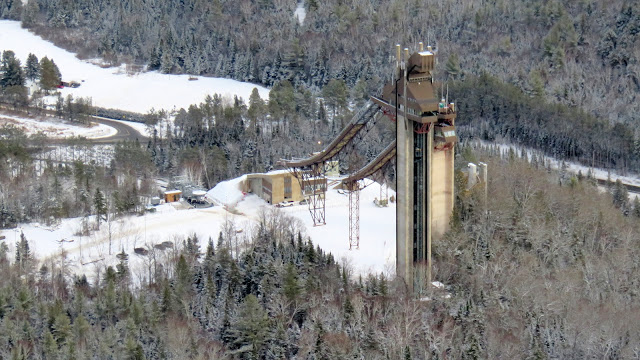 I skirted around the pair of Olympic ski jump towers intruding into the traffic pattern for runway 32. 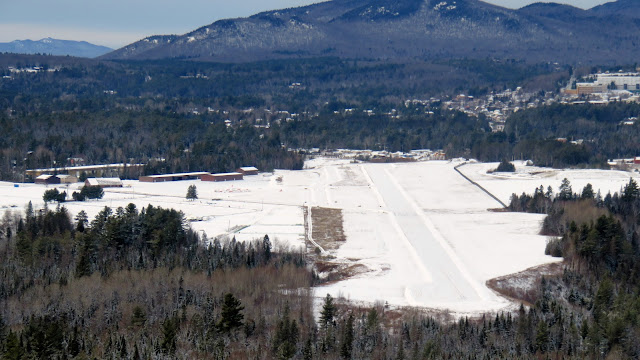 Although the runway was covered with snow, I could see the underlying asphalt through the powder and judged it to be shallow enough for a safe landing. The only problem was that I could not see the markings for the displaced threshold. From memory, I knew that it was about halfway between the end of the runway and the first taxiway, so I aimed my touchdown to occur there. It was sweet.
Lunch was at Big Slide Brewery & Public House. I arrived for a late lunch, so I had a corner of the place to myself. The Moroccan Chicken Sammich (Ciabatta roll, yogurt and spice marinated chicken breast, sweet potato relish, Ras-Al Hanout aioli, Boston lettuce, tomato) was delicious. The menu is not extensive, but it changes seasonally and everything I have tried has been excellent. I was reminded of how good my sandwich was when I masked-up to leave; rebreathing my own breath was almost like having seconds. 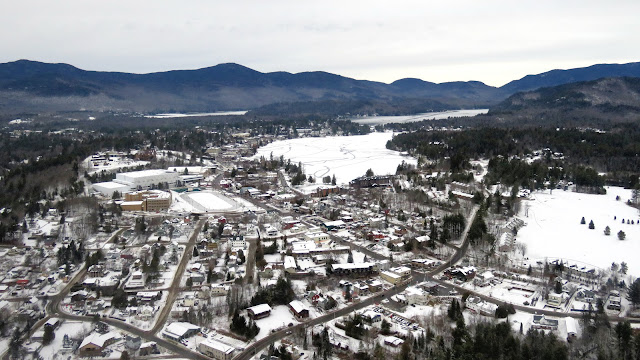 Boston Center would neither answer me nor the Bonanza just a couple of miles ahead that launched out of Saranac Lake. Instead, we both reached out to Syracuse Approach from 50 miles out and were rewarded with squawk codes. I followed him right to Griffiss where we fueled up at the self-serve pump ($3.23/gal).
The Bonanza pilot was a bit green and I helped him operate the fuel pump. He explained that he'd gone from training in a Cessna 150 last year into a new-to-him 1956 V-tailed Bonanza that he had owned for all of six months. That was quite a jump! The Bonanza was clearly outpacing me while inbound to Griffiss.
Dusk approached as I flew over Syracuse on a heading for home. I shared the airspace with Ed and Stacey who were conducting a dog rescue flight. After a smooth, relaxing day in the air, I was nonetheless pleased to see the runway lights of the Williamson-Sodus Airport welcoming me back.
After intentionally avoiding the obvious ice on the ramp, I nearly lost my footing on black ice while stepping down off the Warrior's wing. Oh no, not again. Something tells me that winter fatigue will kick in soon. But today? Today was glorious.
Logged by Chris on Saturday, December 19, 2020 1 comment: