Winter's arrival in Upstate NY was delayed this year. On Christmas Eve, I eyed the green grass of my still-thriving lawn with concern that I might need to mow again before year's end. Instead of a white Christmas, we had an emerald one. Winter inevitably arrived mid-January with no apologies for its tardiness; it was all bluster and cold shoulder. Sodus Bay responded accordingly.


It is not that I find winter landscapes more beautiful that those of the other seasons, but they are profoundly different and that appeals to my short attention span. I relish the seasonal change and the radically altered landscape it fosters.


For example, bay ice does not form as a uniform, Zamboni-manicured sheet. Microdomains freeze first, producing a bizarre landscape that appears to have been produced by a biological process. 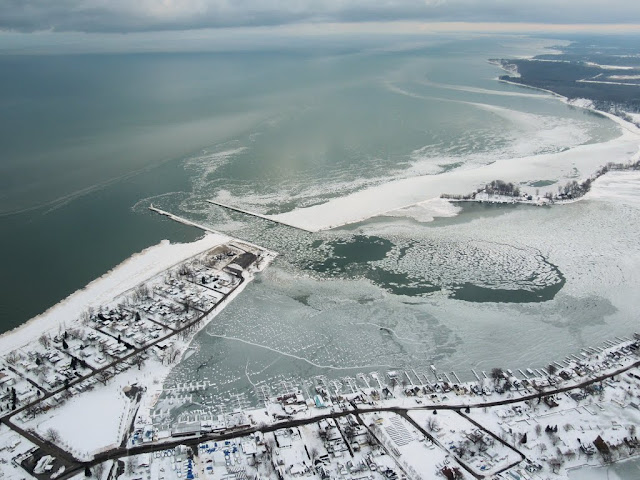 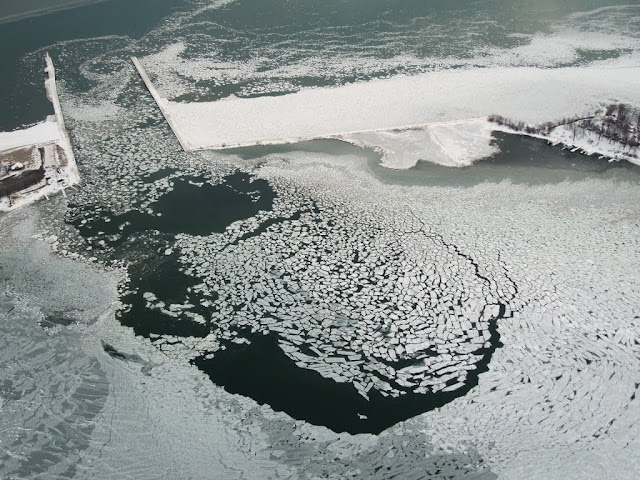 Dynamic forces shape the water closest to the surface: freezing, breaking, melting, freezing again. Though variations on a theme, the patterns are different every year. 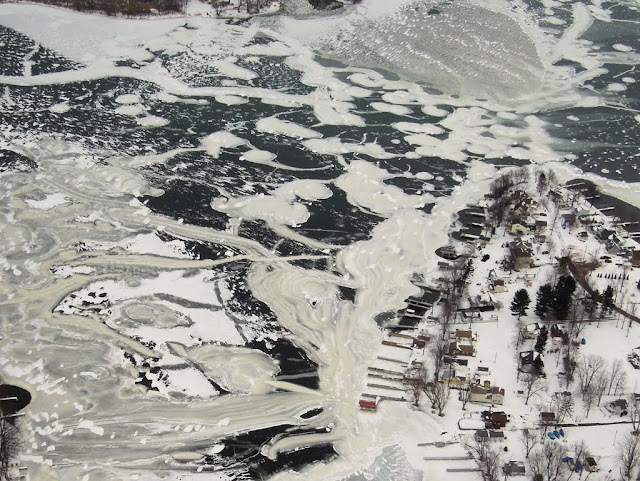 Done with surveying Sodus Bay under a steely gray ceiling, I was struck by a bright azure band on the eastern horizon. Blue sky! I tuned the automated weather broadcast for the Oswego County Airport and listened.

"Sky clear below one two thousand," said the AWOS.

Like a moth to a flame, I turned my ship eastward. 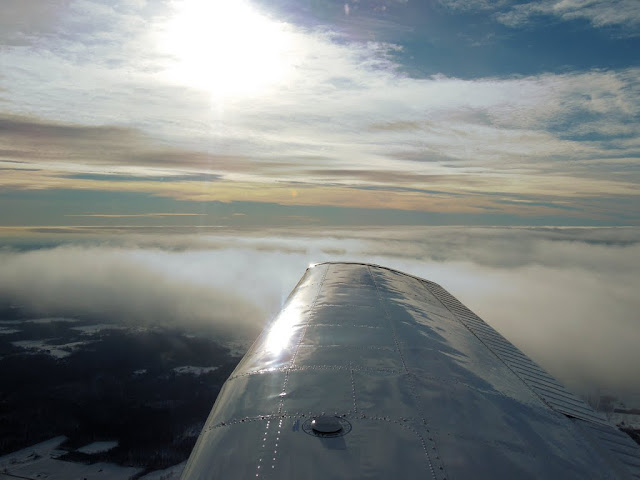 I emerged from beneath the the 2,000 foot deck and climbed higher in the sun, switching to sunglasses. 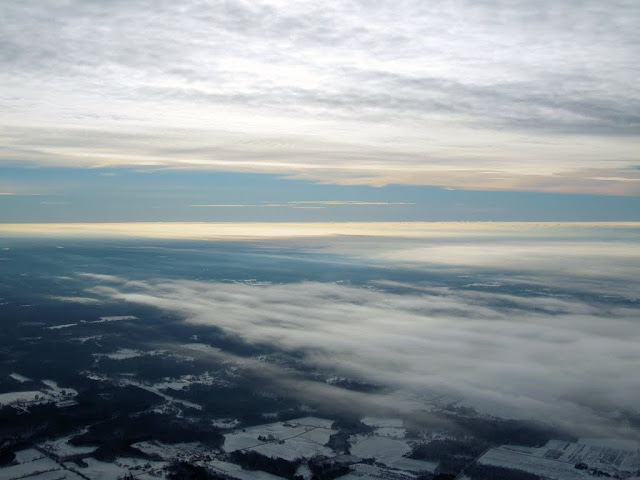 From over the Oswego County Airport, the air was so clear that I could actually see the Adirondack Mountains. I checked weather (clear and calm) and NOTAMS (none of any importance) for Saranac Lake, Lake Placid, and Piseco. The Rochester forecast indicated improving conditions through much of the day. The Warrior's tanks were topped with fuel minus whatever was burned doing a couple of touch and go landings.

It seemed a perfect opportunity for an impromptu mountain getaway, so I took it.

The Piseco Airport is a small facility on the north end of Piseco Lake in the southern Adirondacks.


I adore the Piseco Airport for its quiet existence among humble peaks. I also have a history of crummy landings there due to the effects of nearby terrain on the wind. I broke the streak as I gently settled the Warrior onto the plowed runway. 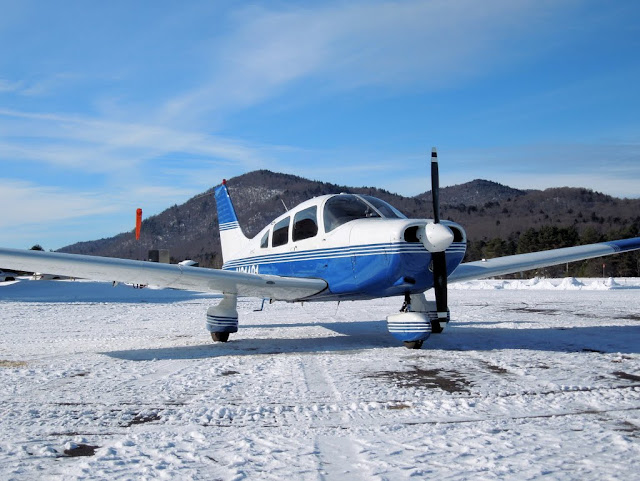 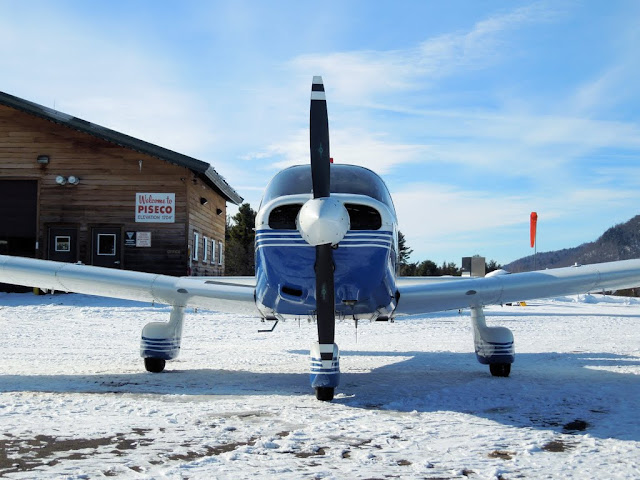 I was alone at the Piseco Airport and did not stay long. 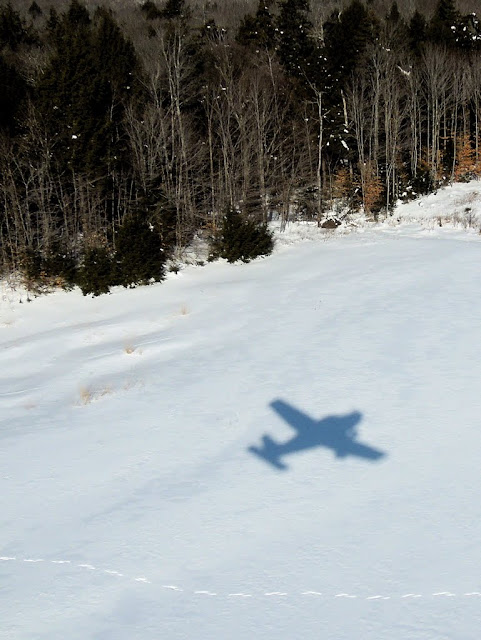 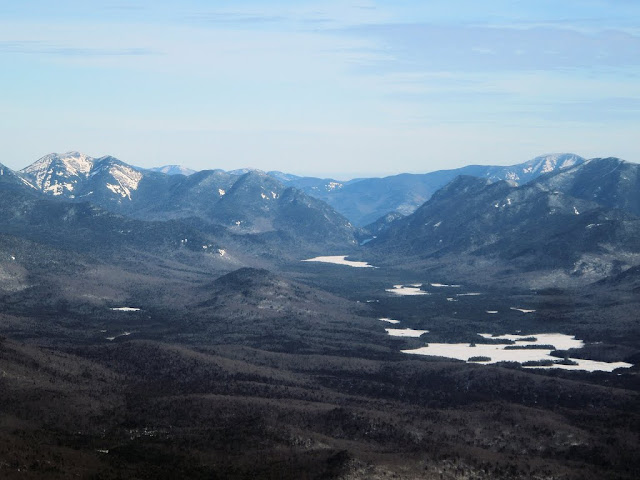 From Piseco, I set a northeast course to Lake Placid by navigating above valleys running through the High Peaks. 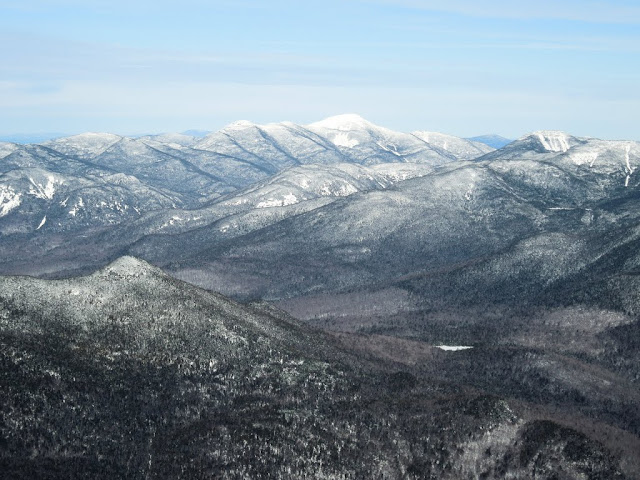 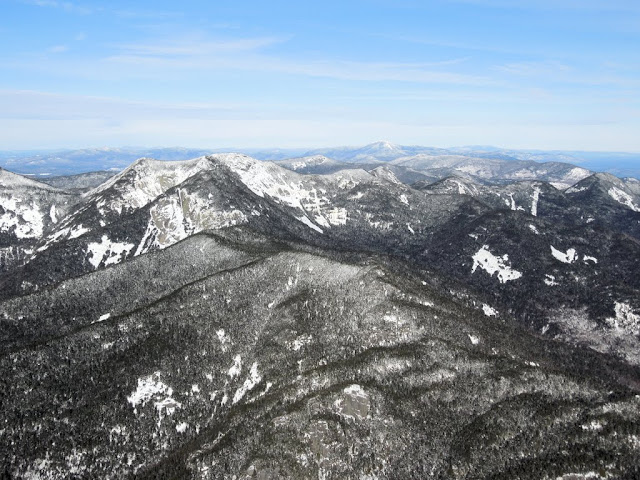 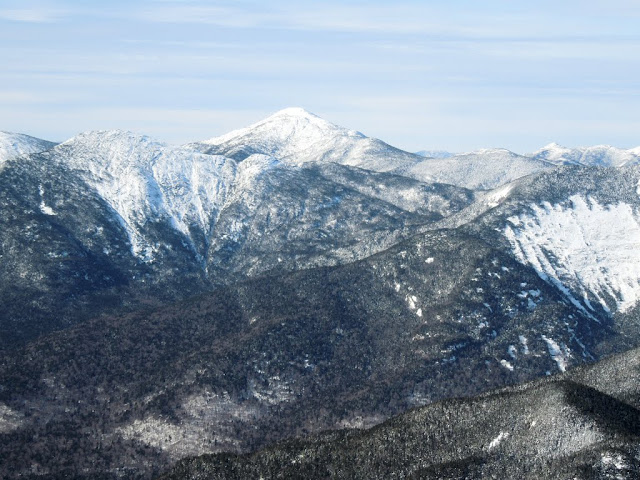 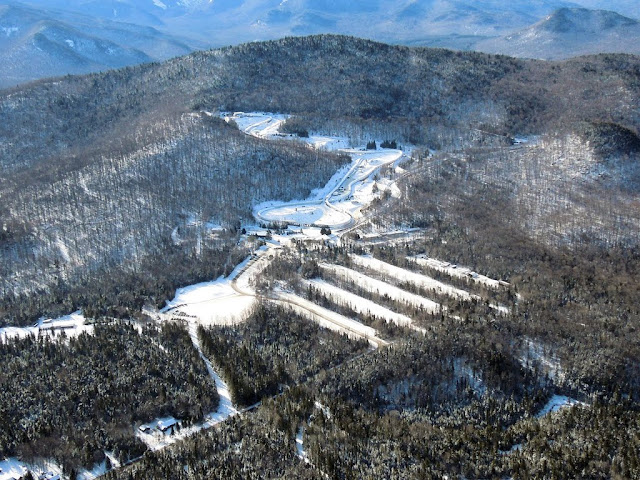 Entering the valley near Lake Placid, I spotted the Lake Placid Olympic Sports Complex that includes the first bobsleigh run built in the United States for the 1932 Olympics. 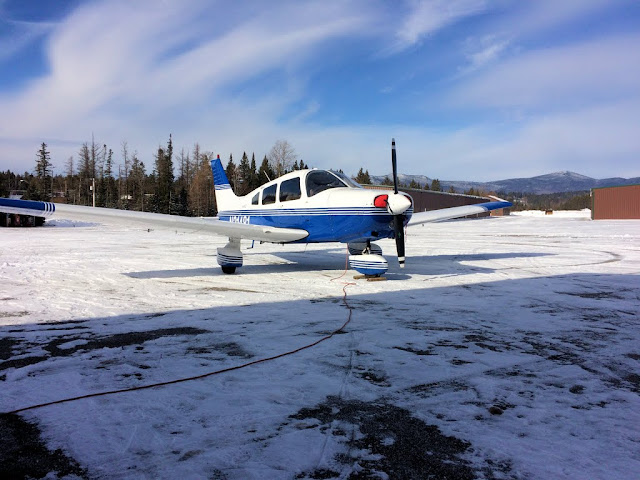 My experience in Lake Placid was phenomenal and I am grateful to the folks at Adirondack Flying Service for being such excellent hosts. Inbound, my initial radio call on Unicom was answered with an unsolicited wind check! I have not received a wind check on Unicom in years. I topped-off with with fuel ($4.48/gal!) and line service offered to plug in my engine heater to keep things warm during my stay. I had just missed the Trolley for a ride into town. When I indicated that I would walk, my host offered me the use of his personal truck.

Lake Placid: visit for the mountain views, stay for the hospitality! 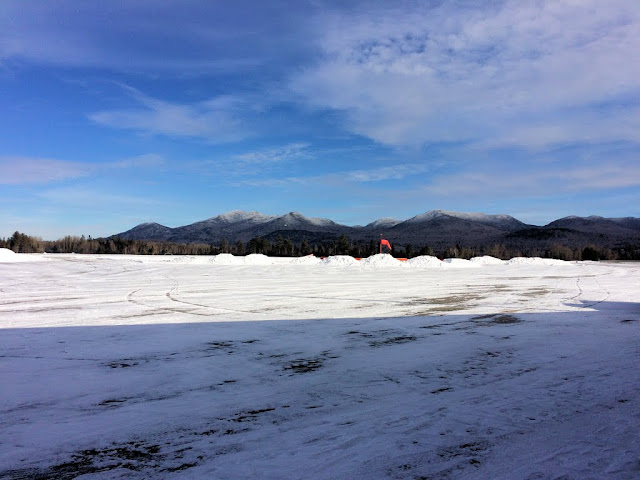 Because I had a great experience there last fall, I went to Lisa G's for lunch. As I ate, I used ForeFlight to plan my return. When I brought up the map, it showed snow falling over Rochester and Sodus. Though Sodus' AWOS is not captured by the FAA, Rochester (to the west), Oswego County (to the east), and Syracuse (to the southeast) were all showing ceilings of 1500 feet.

Uh-oh. So much for that forecast of improving conditions.

From experience that morning and after reviewing the pertinent Skew-T diagrams, I expected the ceiling to be a thin layer. Icing probability was low, but not zero. I filed an IFR flight plan direct to Sodus from Lake Placid with the expectation that I might need to descend through a thin layer to get home. This seemed like a better plan than scud running VFR from the east end of Lake Ontario back to Sodus. I decided that the low probability of icing combined with an expected thin cloud layer and an expeditious descent would suffice to keep me out of trouble.


I departed Lake Placid and picked up my IFR clearance with Boston Center for the flight home. The snow over Rochester and Sodus had stopped, but area ceilings were still low.

At altitude, some unusual motion caught my eye; a drip from the wet compass hanging above the glareshield. My wet compass was leaking kerosene. Well, that explained the faint whiff of jet fuel I thought I smelled on the ground in Lake Placid. 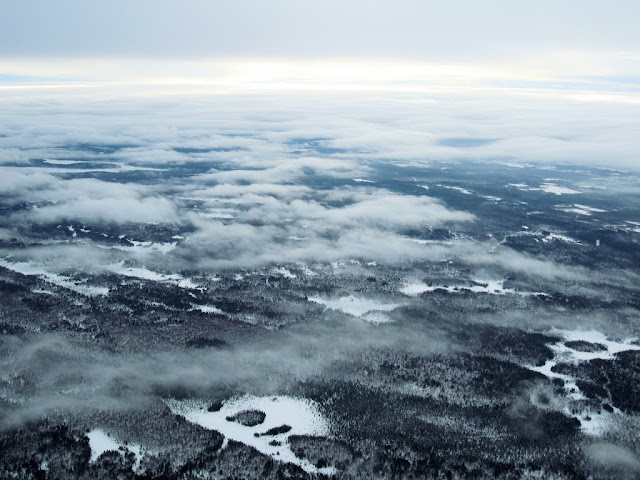 Northeast of Syracuse, I found myself between layers at my IFR cruise altitude of 6,000 feet. 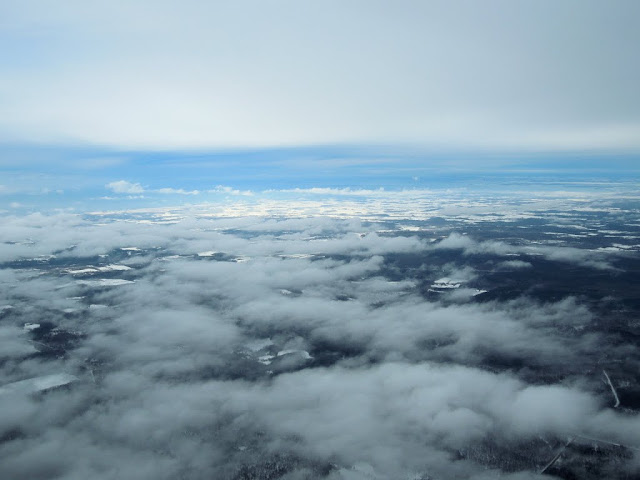 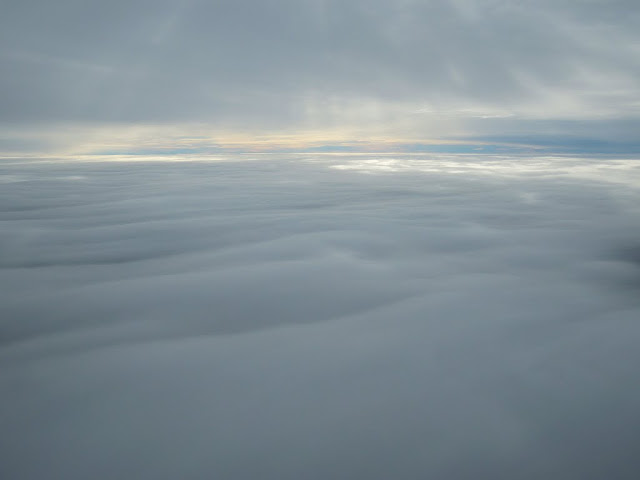 The layers became more solid as I cruised between them, but the lower layer was visibly thin. Once I was able to receive the Sodus AWOS broadcast, I discovered that there was an open hole in the deck over my home airport: 6,000 scattered. I was virtually assured of an easy approach and landing at home.

Syracuse approach prompted me to declare my desired approach. I had the option of selecting an instrument approach, a visual approach, or simply cancelling IFR with the knowledge that the ceilings were high over Sodus. Given that I was not in a region of "known icing" (I was many thousands of feet below the AIRMET for icing) and that easy escape was available either above or below the thin deck, I took a calculated risk and requested the RNAV 28 instrument approach into Williamson-Sodus.

While still many miles away from the airport, Syracuse cleared me direct to WALCO (an initial approach fix for the GPS procedure) and descended me to 3100 feet, putting me directly into the thin layer of clouds. Really? So far out? I switched on the pitot heat and turned to the new heading while descending. My tracking of  the new heading was sloppy because much of my attention was spent scrutinizing the leading edges of my wings for ice accumulation.

For several minutes, I droned along inside the gray mist and the wings remained entirely clear. Then, seeming to appear instantly, a bead of rime ice materialized along the full span of the leading edges of both wings. It looks like a stall strip, I thought.

Still in the cloud and more than five miles away from WALCO, I notified Syracuse that I was picking up ice and asked for higher. This was granted. Climbing a mere 200 feet put me above the layer and out of further danger. Coincidentally this occurred just as I reached the hole in the deck over Sodus. Though emerging from the clouds halted the accretion of additional ice, the cold air ensured that the ice already stuck to the airframe remained there all the way to the ground.

I flew the RNAV 28 approach visually. I noted no decrease in airspeed from the ice accumulation and control authority in the flare seemed normal.


Taxiing back to my hangar with the frosty evidence of my latest adventure still stuck to the airplane, I chastised myself. Yes, the icing risk was low. Yes, I had an escape plan and utilized it. Nonetheless, I was taxiing Warrior 481 back to the hangar with an icy badge of shame -- of poor judgement -- still adhered to my wings. Inspecting the airplane, I discovered that the accumulation on the wings was more severe than I could discern from the cockpit. I also found it in places hidden from view such as the nosebowl of the cowling, the gear legs, and small amounts on the leading edges of the prop closest to the hub.

If experience comes from poor judgement, consider me more experienced than I was.

After inspecting the airframe for ice, I discovered that the compass was now hemorrhaging fluid. I slid it out of its holder and placed it on an old towel. I went home smelling like I'd bathed in kerosene; doused in aircraft owner cologne.

Looking at this trend, I fear that I may have already peaked.

I spent a portion of that afternoon on-line perusing compass options: repair, replace with a new wet compass  from Airpath (who manufactured my OEM compass), or replace with a vertical compass card. The latter are well-loved when they work, but installation results are reportedly variable - sometimes people have great luck with them and sometimes they don't.

I called Ray for his professional opinion on compass options and next steps.

"While climbing out of Lake Placid, my compass started leaking kerosene," I explained. "The airplane positively reeks of it."

"Yeah, that stuff smells pretty bad when it gets old," he commiserated.

"Do you have any recommendations on a path forward?"

"I would try some Febreeze," Ray offered unhelpfully.
Logged by Chris on Sunday, January 24, 2016 6 comments: