While living in Kalamazoo MI, I volunteered my time as a docent at the Kalamazoo Air Zoo.  As a result, I spent a lot of time with the Air Zoo's wonderful collection of aircraft.  Pictured here are some examples.  When I moved away from Kalamazoo, I spent time on January 2 and January 6 taking photographs of some of my "friends" in the collection. 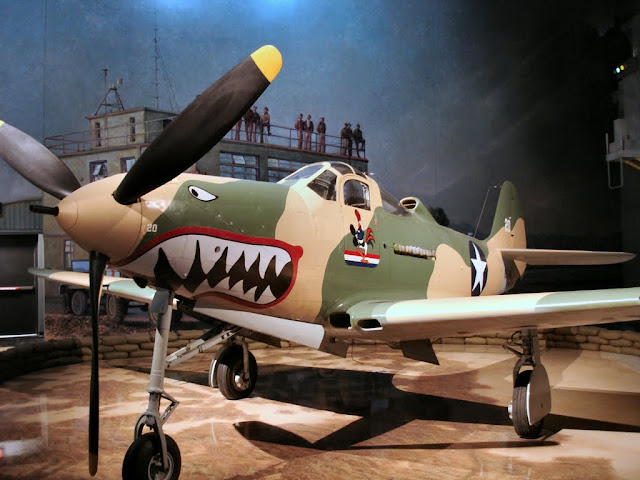 One of my favorite tour subjects at the Air Zoo is the Bell P-39 Airacobra.  Designed around the 37 mm canon in its nose, the designers located the normally-aspirated Allison 1710 engine aft of the cockpit.  It was the first fighter with tricycle gear, providing excellent visibility over the nose during ground operations.


Several design elements of the P-39 made Western pilots uncomfortable, resulting in a love/hate relationship with the Airacobra best described by Edward Parks in his book, "Nanette".  Pilots worried about bailing out of the aircraft via a "car door" that would need to be opened against the slipstream (later rectified by addition of a device that pulled the hinge pins from the door).  Having a driveshaft spinning directly under one's seat made for an uncomfortable ride as a function of RPM.  Most of all, there was concern about sitting in front of the Allison 1710 should it break loose from its mounts during a forced landing.

Though it was fast and nimble at low altitudes, its lack of turbo- or supercharging resulted in anemic performance at higher altitudes.  The US loaned about 2/3 of the Airacobra fleet to the Soviets partway through the war.  There are discrepancies in the literature on how the aircraft was best used (tankbuster/ground attack versus air-to-air fighting), but all sources agree that the Soviets obtained excellent service from the aircraft so maligned by American pilots.

To the best of my understanding, this is one of only four airworthy Airacobras remaining in the world.  It is painted in the same markings as "Whistlin' Britches", a P-39 that played a pivotal role in the battle at Guadalcanal. 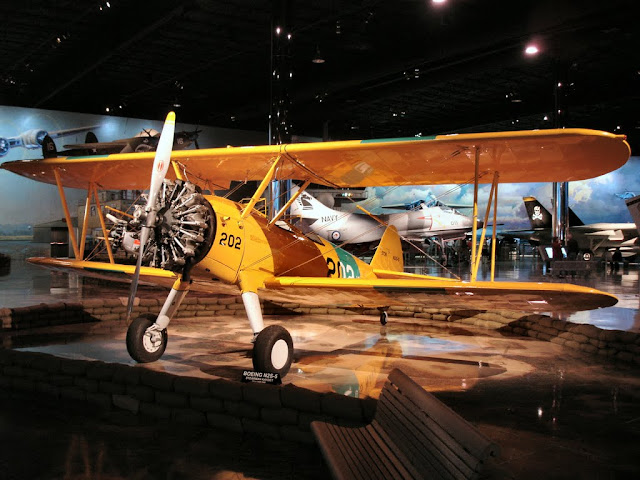 This Boeing Stearman was one of the first aircraft in the Air Zoo's collection.  Perhaps the most commonly used primary trainer of World War II, the Stearman was notorious for its narrow conventional gear, which gave it a tendency to ground loop. 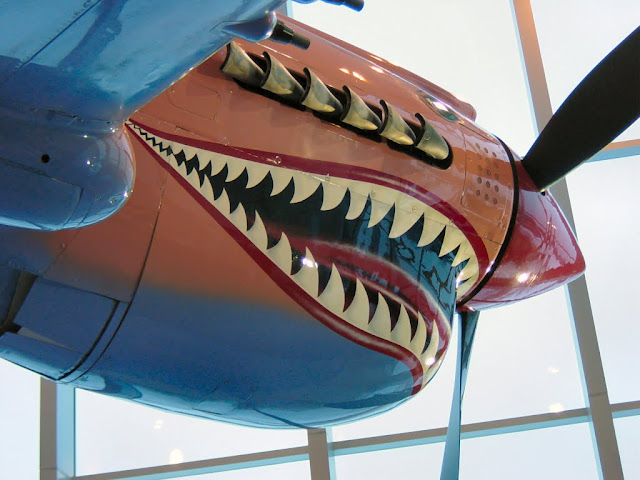 Upon entering the Air Zoo, visitors are treated to this P-40 Warhawk floating over the registration desk.  This easily recognizable P-40 was flown for many years by Sue Parish, a former WWII WASP and the co-founder of the Air Zoo.  It is a fitting totem for the lobby of the Air Zoo. 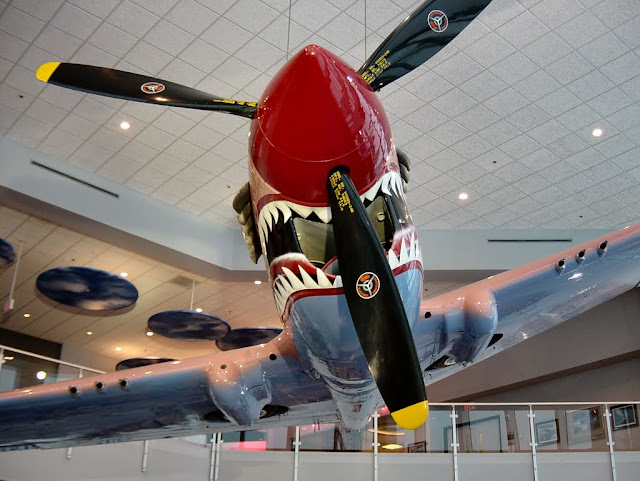 Sue's P-40 bears a hybrid color scheme, blending elements from the Fighting Tigers of the AVG and the desert camouflage used in North Africa.  However, it's worth noting that some aspects of the airplane's livery are Sue's take on these markings.  For example, the P-40 is a little more pink than North African P-40s (Sue likes pink).  Also, the mouth on her Flying Tiger contains more smile than snarl and I'm pretty sure that no P-40s fought in China wearing lipstick! 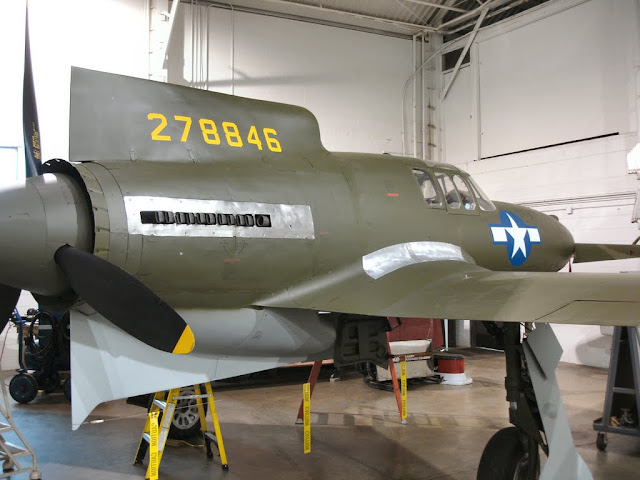 Restoration is almost complete for the world's only surviving Curtiss XP-55 Ascender.  In the dying days of World War II, the US military desired a 500+ mph interceptor and invited aircraft manufacturers to submit design bids.  Thinking outside of the box was encouraged.  The XP-55 was one such proposal.  It was an early canard design, with a stabilator canard wing on the nose and a pusher engine.  The 24-cylinder engine intended for the aircraft was never built, leading to the substitution of a 12-cylinder Allison 1710 that was never able to push the Ascender anywhere near 500 mph. 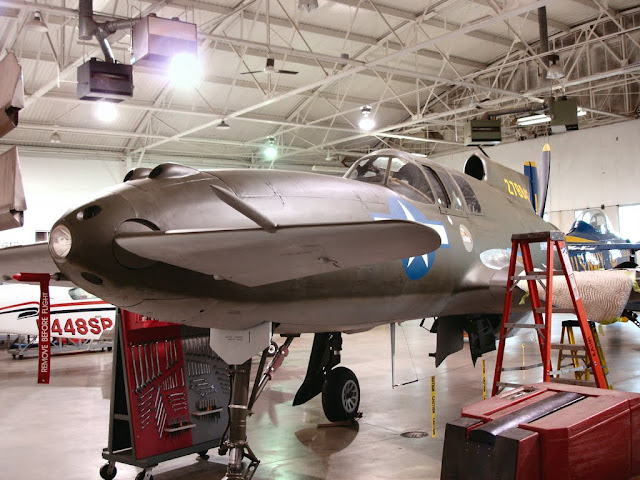 Although modern canard-wing aircraft are known to be highly stable and difficult to stall, the XP-55 was quite the opposite.  It was extraordinarily unstable and possessed unpredictable stall characteristics.  Of the three prototypes constructed, only this aircraft survives (both of the others crashed owing to the aforementioned unpredictable stall characteristics).  The aircraft is on long-term loan from the National Air & Space Museum to the Air Zoo, whose expert restoration personnel have almost returned this Ascender to its original appearance.  Though considered one of the worst aircraft ever built, certain design elements were very forward-thinking; just poorly-implemented.

Finally, it gives me great delight to think that someone named this backward-looking aircraft "Ass Ender" right under the noses of the bureaucrats that approve such things. 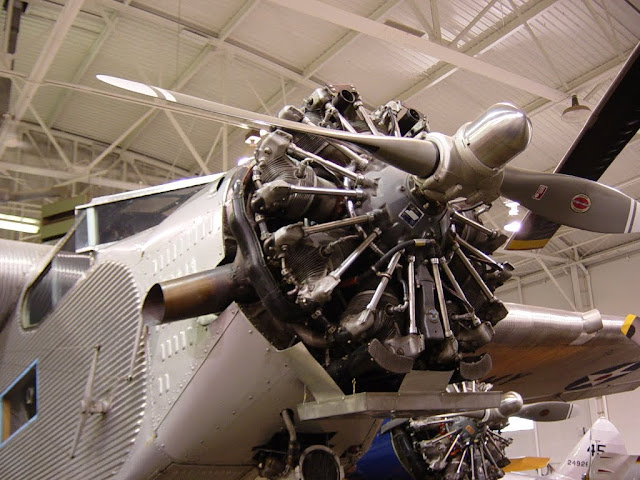 Up close and personal with the Air Zoo's 1929 Ford Trimotor.  Early in its life, this Ford served in the fleet of a fledgling Northwest Airlines.  It later served as a lifeline for citizenry in remote Alaskan towns.  It has survived crashes and drowning (long story on the latter).  Most recently, it has been spotted in the skies of Kalamazoo giving museum visitors a taste of early commercial air travel. 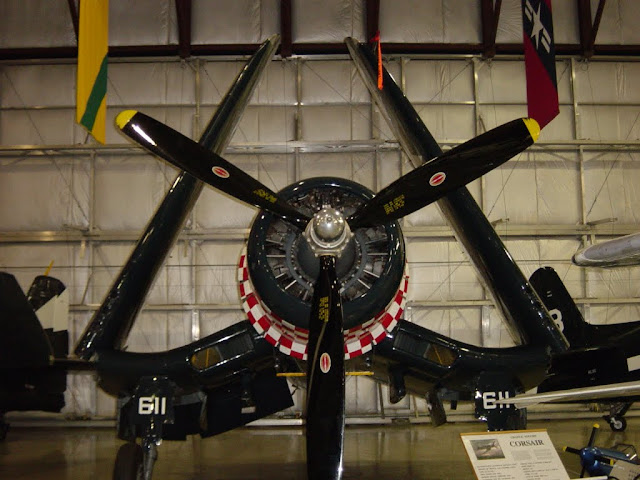 Known by many nicknames, including "Whistling Death", the Corsair was one of the fastest single-engine fighters developed during World War II.  Though designed by Chance-Vought, this particular Corsair was built by Goodyear and fitted with a Pratt and Whitney R-2800 engine built by Nash Kelvinator. 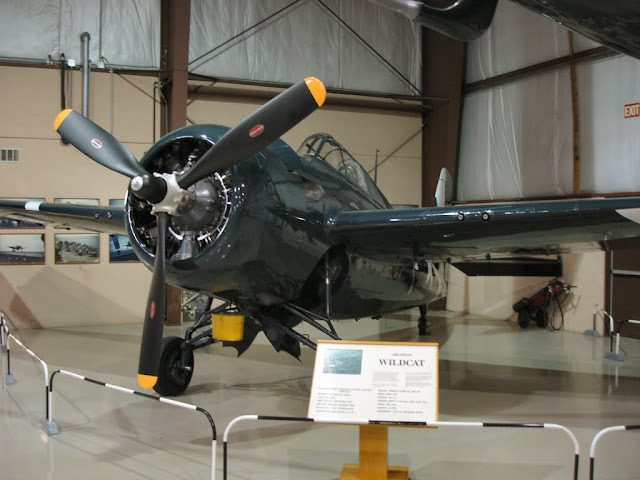 Originally designed as a biplane in the late 1930's (like its F3F predecessor), the Grumman F4F Wildcat was produced as an all-metal mid-wing fighter.  Though obsolete compared to the Japanese fighters of World War II, this overmatched aircraft fought very successfully against the Japanese in the Pacific until the introduction of the larger, faster F6F Hellcat.  This Wildcat is an FM-2 produced by Eastern Aircraft Company, a Division of General Motors. 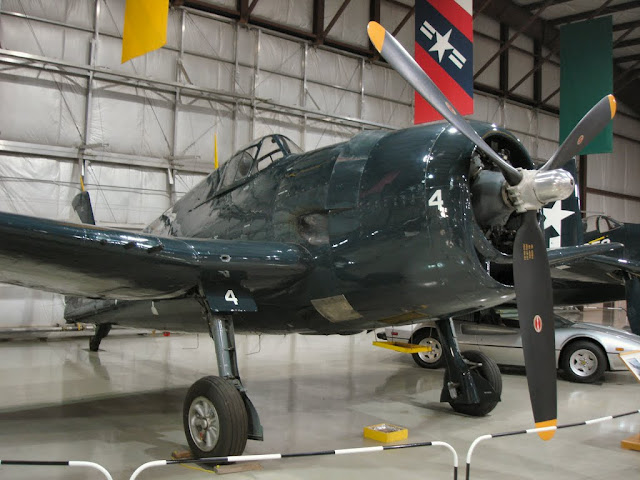 Flying behind the mighty 18-cylinder Pratt & Whitney R-2800 Double Wasp radial engine, the Grumman F6F Hellcat had an astounding 19:1 victory to loss ratio against the Japanese in the Pacific.  Durable and easy to fly, the Hellcat was beloved by the Navy pilots who flew her.  The Hellcat was the first aircraft that I researched when I became a docent at the Air Zoo and will forever be one of my favorites.  It may not be as sexy as the Corsair or Mustang, but its nickname of "Ace Maker" is well-earned. 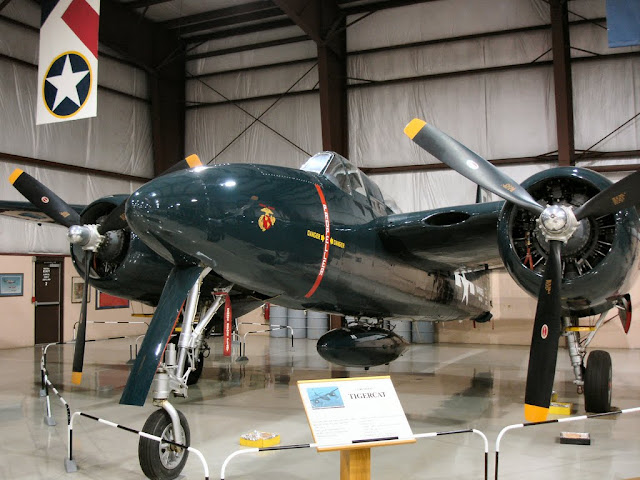 With its acquisition of this photo reconnaissance model Grumman F7F-3P Tigercat, the Air Zoo became the first museum in the world to possess airworthy examples of all four World War II Grumman Cats.  This is a rare aircraft.  Only 363 Tigercats were ever produced and only about ten survive to this day.  The Air Zoo's Tigercat is one of five or six still airworthy in the world. 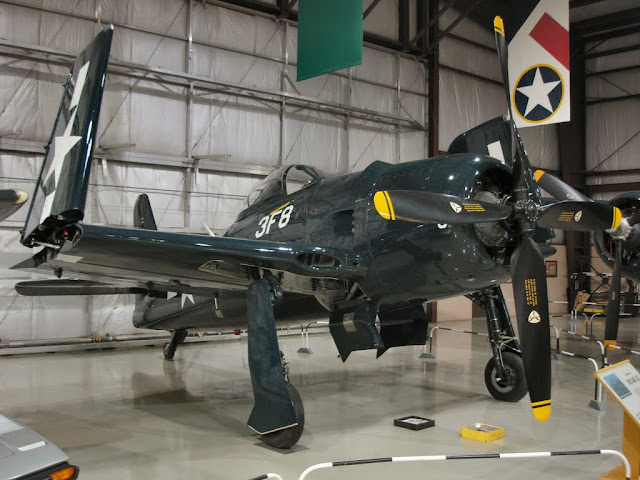 Here's a fun exercise: take the Pratt & Whitney R-2800 engine and drop it into the smallest airframe that can carry it.  What do you get?  A dragster: the Grumman F8F Bearcat.  Capable of 455 mph airspeeds, the Bearcat was the fastest single engine, piston-driven fighter developed during World War II (emphasis on developed; it went into production too late for active duty during WWII).  Much of the Bearcat's design is said to have been inspired by Grumman engineer / test pilot Bob Hall's inspection of a captured German Focke-Wolf 190.  Or so his sons told me when they took my tour.  These are the best kinds of tours, by the way - when the real experts visit and share their knowledge. 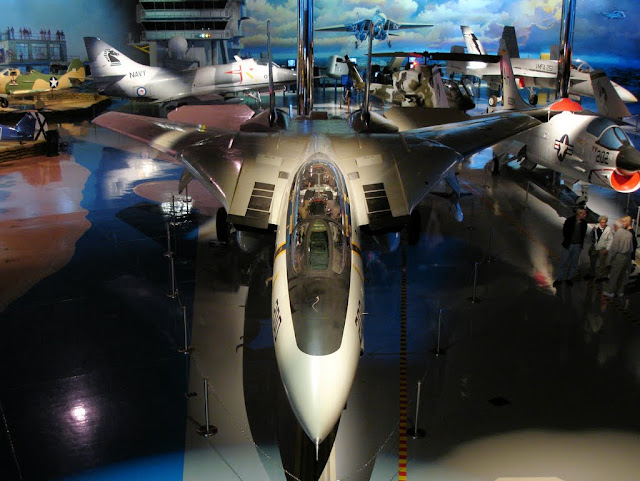 The Grumman F-14 Tomcat was one of my favorite subjects when I gave tours at the Air Zoo.  Who can resist the true star of "Top Gun"?  The Tomcat entered Naval service in 1972 and remained active until 2005. 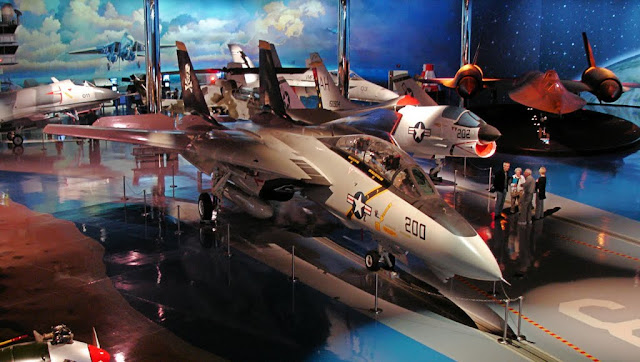 This F-14 sits on the Air Zoo's simulated carrier deck and, behind it, another Tomcat is on final approach in Rick Herter's masterpiece mural.  The Tomcat was the last Cat provided to the Navy by Grumman.  It was fast, rugged, and, these pictures show, it's just a good looking airplane. 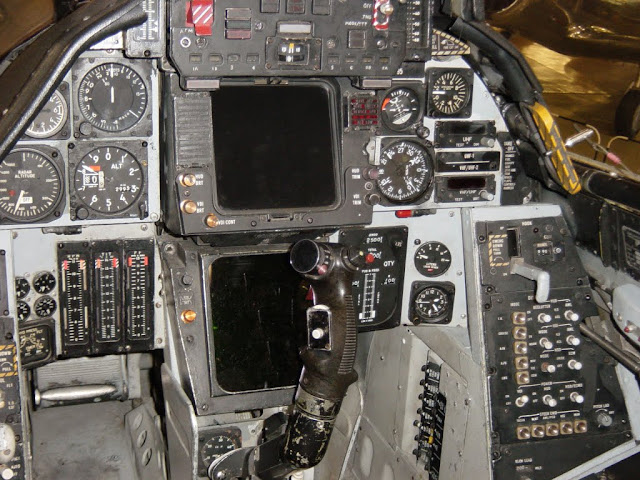 It's not every day that I get to sit in an F-14.  The first time, I was surprised at the amount of analog gauges.  In retrospect, this makes sense considering that the Tomcat entered service in 1972.  This particular aircraft last served during the Gulf War in the early 1990's.

Despite having been designed in in the late 1950's, the Blackbird still rates as the fastest (March 3.2), highest-flying (85,000') manned, air-breathing jet aircraft ever produced. 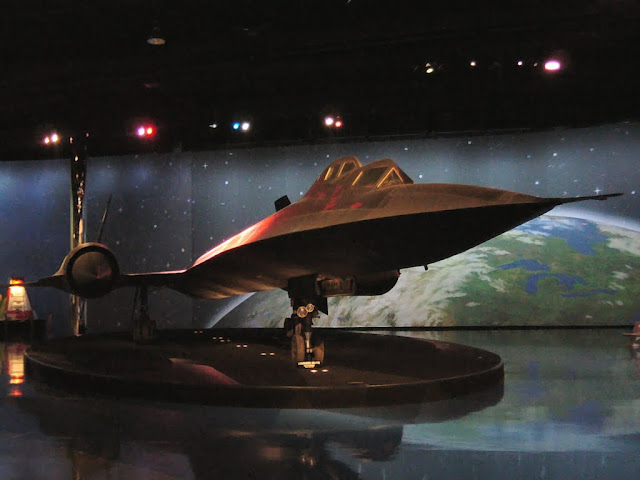 This example is the world's only remaining B-model Blackbird.  It was used to train new Blackbird pilots (note the dual cockpits) and is considered to be the most-photographed of all the Blackbirds.  We are very proud to have this aircraft in Kalamazoo. 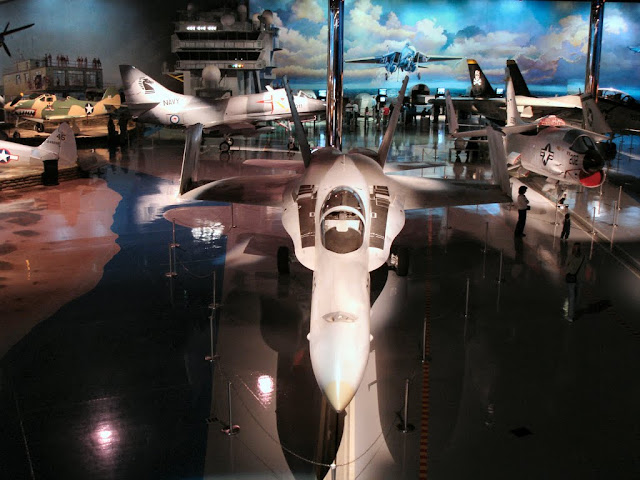 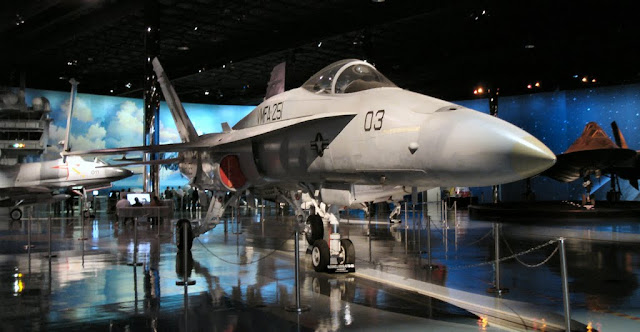 The Air Zoo's F-18 was a Blue Angel in its former life, arriving at the museum in full Blue Angel livery.  Its current paint scheme depicts an active duty Hornet. 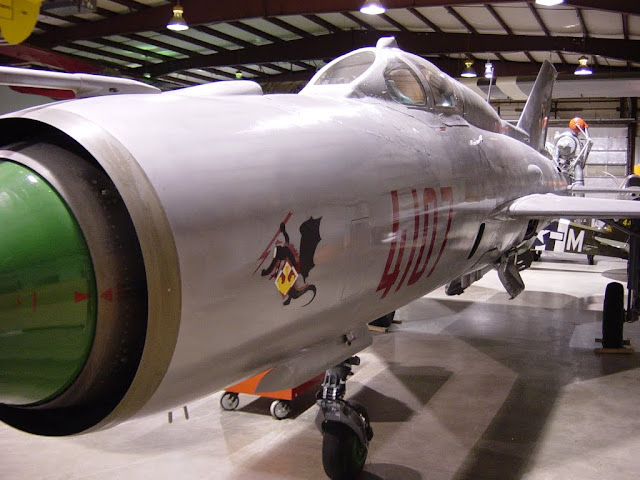 Still in the Air Zoo's Flight and Restoration Center after a full cosmetic restoration, the MiG-21 displays colors and insignia of the Polish Air Force in which it served before coming to Kalamazoo.

When the Boeing Stearman could not be produced in sufficient numbers to train Naval cadets, The Naval Aircraft Factory began to build the N3N to fill the gap.  It's nickname was "Yellow Peril", so-called because its bright yellow paint denoted a primary Naval trainer.  I liken this paint scheme to those "Student Driver" signs one often encounters during the summer months on slow moving (ie., traveling at the posted speed limit) automobiles filled with teenagers and one very brave adult.  Yellow Peril, indeed. 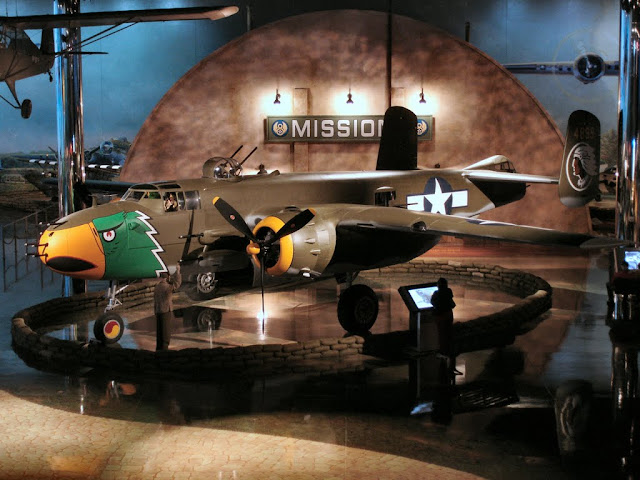 A North American B-25J bomber, popularly known as the Mitchell.  The B-25 is most well known for its role in the famous Doolittle Raid over Tokyo during World War II, where it became the first twin engine airplane to launch from an aircraft carrier. 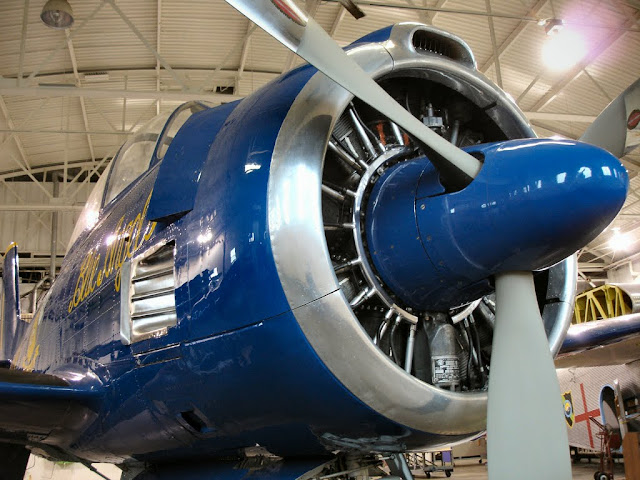 The T-28 was a post World War II piston-driven trainer meant to transition cadet pilots into jets.  As a result, it featured tricycle gear and a thin wing with more jet-like flight characteristics.  I have a special bond with this plane as it is the only one of the Air Zoo's collection in which I've flown. 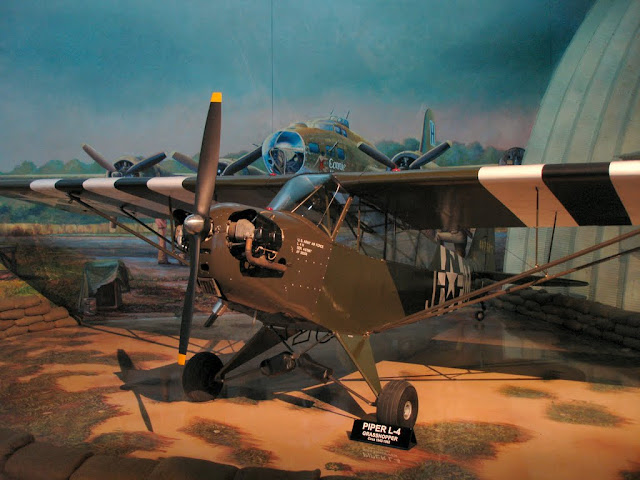 Visitors to the Air Zoo usually want to see rare, exotic, or extraordinary aircraft.  I love to disappoint by presenting them with this Piper Cub in military drab.  However, you have to respect the pilots that flew reconnaissance missions low and slow over enemy lines in an unarmed, unarmored Piper.  Furthermore, it is a little known fact that the L-4 is credited with the final aerial victory for the Allies in World War II.  An L-4 on patrol encountered a similarly-equipped German liaison aircraft.  Both pilots drew their pistols and exchanged fire.  While the American did not actually "shoot-down" his adversary, he did succeed in wounding the German pilot who then lost control of his aircraft and crashed. 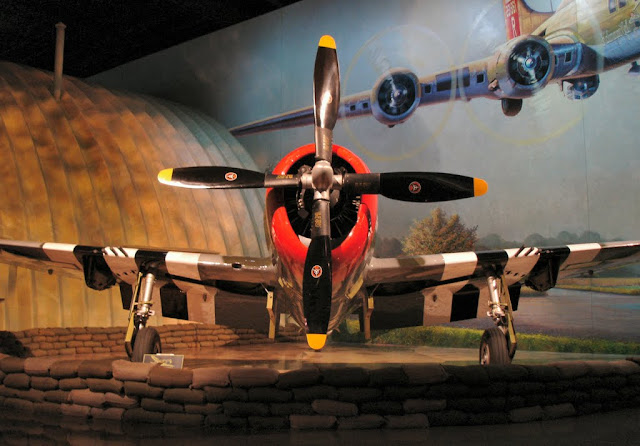 The P-47 Thunderbolt was the heaviest single-engine fighter built during World War II.  Its reputation for taking a lot of punishment was well-earned; it almost always brought its pilots back home. 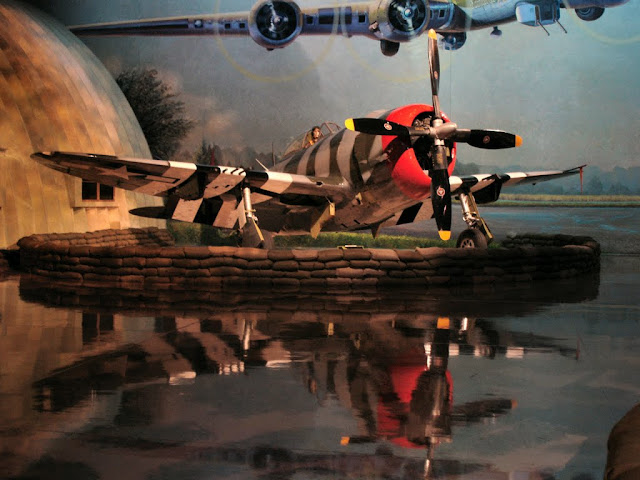 Museum visitors often inquire about the significance of the black and white stripes painted on the wings and aft fuselage of several of the WWII aircraft on display.  The stripes go by a variety of official and unofficial names: "Normandy Stripes", "Invasion Stripes", or the particularly descriptive "Don't Shoot Me Stripes".  All allied aircraft that participated in the D-Day invasion were so painted and gunnery crews were ordered to shoot down any aircraft (of allied origin or otherwise) that did not posses these markings. 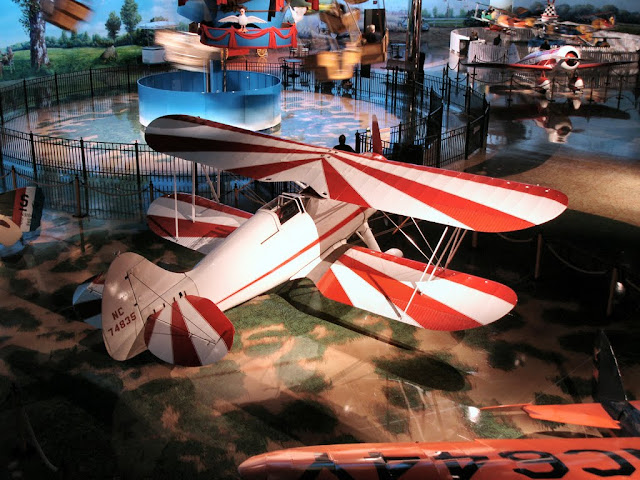 In 1937, WACO (Weaver Aircraft Company) built six VPF biplanes for the Guatemalan Air Force.  Obviously a limited-edition aircraft, this beautiful VPF eventually made its way back to the United States.  I'm guessing that the paint job is not original.  :-)