In Search of a Silent Killer


What do you do when you are cruising 1.5 miles above southern Ontario and an eight dollar sensor indicates that Death may have slipped quietly into the cabin when you weren't looking?

When it happened to me, I was fortunate to be asymptomatic and in possession of a referee carbon monoxide detector. When the original sensor failed to return to a normal state in fresh air conditions, I concluded that something had gone awry with it. This was, I think, a reasonable conclusion.

But still, I wondered. I began looking for electronic CO detectors that display numerical dosimetry data. This would provide trend information far more precisely than relying on subjective interpretation of a darkened spot on a disposable card.

I picked up a "Pocket CO" detector manufactured by KWJ Engineering ($125 from Aircraft Spruce) and went out for a cross country flight after dark to test it and my ship.

Prior to engine start, the device indicated the expected zero part-per-million (ppm). So far, so good. After engine start, a taxi to the departure end of the runway, and waiting for helicopter traffic in the pattern to land, the reading crept up close to 10 ppm.  This is, in effect, the aeronautical equivalent to idling in traffic when CO levels are expected to be at their worst (only the airplane does not have a catalytic converter like cars do).  Aggressively leaning the engine brought this level down, but 10 ppm would only be expected to have deleterious effects on health with longer term exposure.

For context, here's the guidance provided by the manufacturer of the detector: 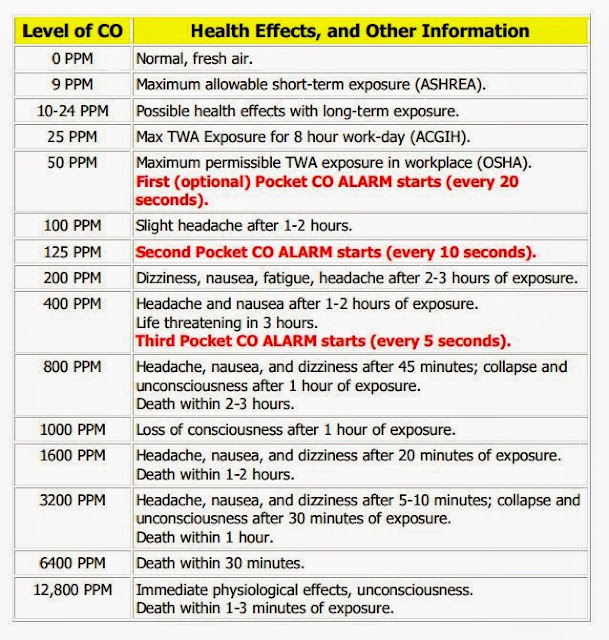 Aloft, CO levels bounced around between 0 and 3 ppm. Then the real test: I turned on the heat. The most likely way to leak CO into the cabin is from a crack in the muffler shroud that provides warm air for the heater.

There was no change in the reading.

At 3,000 feet, I flew west against a 30 knot headwind. A direct course from Williamson to Genesee County Airport put me right over Greater Rochester International. I expected air traffic control to divert me around the field; they usually do. The fact that they did not probably had something to do with the absolute dearth of activity on the radio. I heard nothing on frequency until I was well west of the field when the vanguard of the commercial push first arrived. It was a rare treat to float directly over the airport and downtown Rochester, loafing along at 88 knots ground speed.

Despite a thirty knot headwind at 3,000 feet, surface winds were calm. The windspeed gradient was steep but smooth; there was no evidence of a shear layer. In the pattern at Genesee County, I noted a 105 knot ground speed on downwind while indicating 80 knots.

Along the way, I periodically checked the CO detector. It continued to indicate 0 to 3 ppm (mostly zero, or more correctly, below the device's detection limit).

I made additional landings at my former home in Le Roy and on the newly expanded / resurfaced runway in Canandaigua before gently squeaking the Warrior's tires back on the pavement at Williamson.

Since the original scare with CO, I have been reasonably confident that the problem was a faulty sensor and that no significant safety issue actually existed. After nearly two hours of flying with an electronic CO detector, my confidence in that assessment is increased significantly. The fact that I got a nice night flight out of the deal is just a bonus.
Logged by Chris on Friday, October 18, 2013 5 comments: