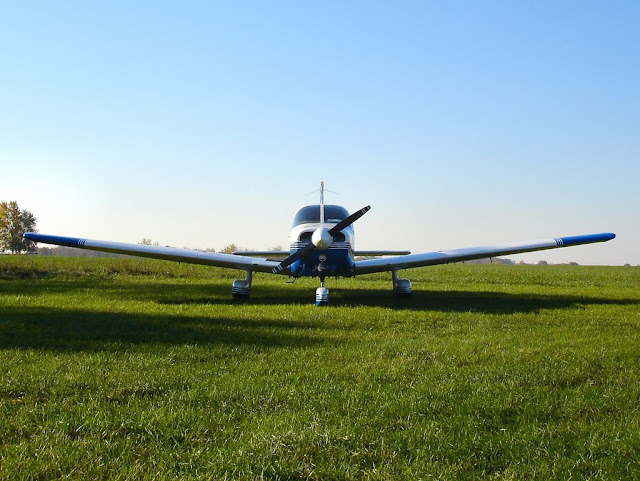 We launched from South Haven at 9:00 am that morning, bound for Jackson, MI.  Dave and Kent were in the Decathlon and I had Kristy and Yit-Yian with me in the Warrior.  Jackson was my favorite breakfast destination in southern Michigan and I had not been yet in 2005.  With the Decathlon in sight 1-2 miles ahead, we each contacted the tower at Jackson and announced our intentions to land.

The tower was BUSY that morning, juggling an unusually high number of departures and arrivals.  Despite this, the controller had the situation well in-hand and I had no worries about getting in.  ATC suggested to the most recent arrival that the ramp was nearly full, but that there was plenty of parking on the grass.  This prompted one of the airborne pilots to ask, "is there an event of some kind today?"

"No, just people coming in for breakfast," came the reply.  Evidently, every private pilot in southern Michigan (and maybe northern Ohio and Indiana) had the same idea we did.  With that many airplanes on the ground, we knew that it would be a long wait for food.  Dave contacted the tower and cancelled his landing request.  I followed suit and soon we were both en route to Coldwater, MI -- our previously agreed-upon backup plan.

As we taxied onto the green field that served as airplane parking for the Coldwater restaurant, two things struck me as odd.  The first was that we were the only aircraft there on a nice weekend morning.  Almost immediately thereafter, I noted that the sign outside the restaurant proudly proclaimed "Los Mariachis".  That didn't sound like the kind of place that would be open for breakfast and, once out of the airplanes, we learned that it wasn't.

So, we returned to South Haven.  After 2.1 hours of flying over a significant portion of southern Michigan, we put the airplanes away and had a noontime "breakfast" at Cousin's restaurant a short drive from our home airport.

Even a failed breakfast run is still a good excuse to fly!
Logged by Chris on Saturday, October 29, 2005 No comments: