Bear Is My Copilot


On what was likely to be one of the last great flying weekends of 2011, The Bear and I departed for the airport under clear skies.  Though all horizontal surfaces in our neighborhood were coated in frost, we held tight to the promise of high temperatures in the low 50's. 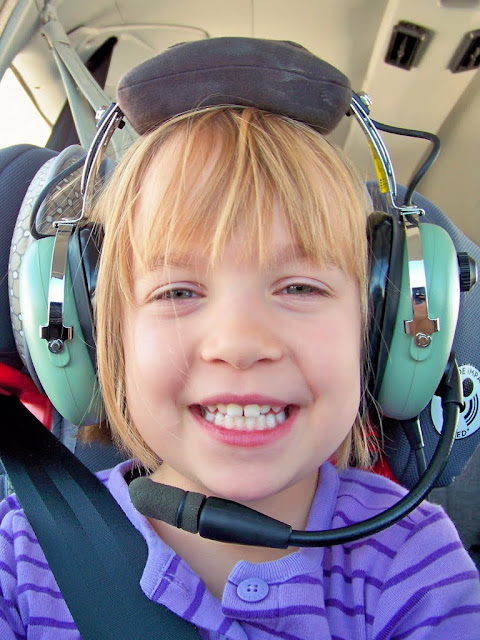 At the airport, The Bear assisted me with installing the engine winterization plate.  Taking wing, we pressed southward against a 12 knot headwind.  We landed at St Mary's Municipal Airport ahead of a gaggle of traveling companions: a Cessna 152 Aerobat, a Husky with tundra tires, and a Citabria.  The Husky and Citabria provided an outstanding opportunity to add a new word to The Bear's lexicon: taildragger.

As we walked to the restaurant, the Husky pilot shouted after us, "hey, don't let her eat all the food before we get there!"  They were a good natured group.  The Husky pilot showed me pictures taken of the other aircraft in close formation while en route to St Mary's.  Then he showed me pictures of the land where he was actively building his own turf runway.  The group was soon joined by another Citabria and Husky, all waiting in anticipation for the final aircraft to arrive.  This aircraft, a vintage WACO biplane, was on its first cross country flight following a 5,000 hour restoration. 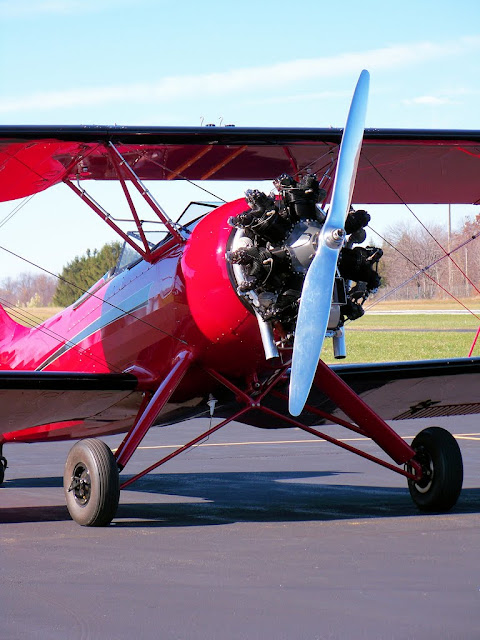 When the WACO approached, the other pilots rushed out to the restaurant balcony to witness the landing.  The Bear and I joined them.  The WACO did not disappoint.  She was a magnificent phoenix wearing crimson Ceconite and swinging a metal prop polished to a mirror finish.  Her pilot set her down in a perfect three point landing on the grass parallel to the paved runway.  It was the first biplane that The Bear had ever seen outside of a museum.

Lunch was yummy.  The Bear had chicken fingers and, after conducting a brief forensic investigation, I was pleased to find that they were actually sliced breast meat rather than minced and reformed "chicken".  I had the grilled chicken, pesto, and red pepper sandwich.

Finished with lunch, The Bear and I bid farewell to the other pilots and returned to Warrior 481.  Taxiing for departure, we waved enthusiastically to a little boy with his grandparents, staring at the assembled aircraft with rapt fascination. 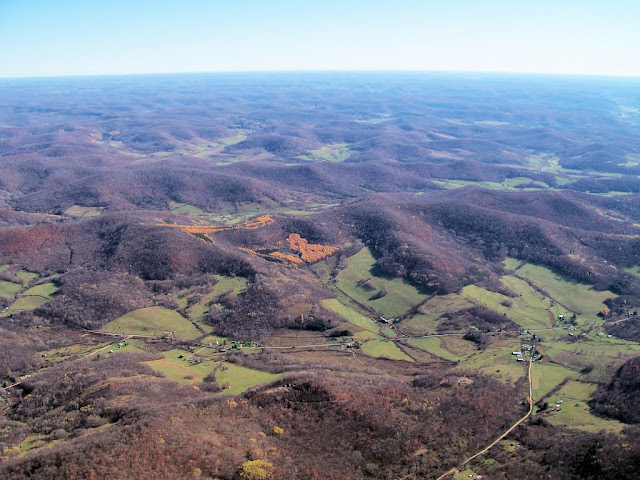 The Pennsylvania landscape was in transition.  Valleys and fields were still green, but surrounded by hills topped with bare trees. 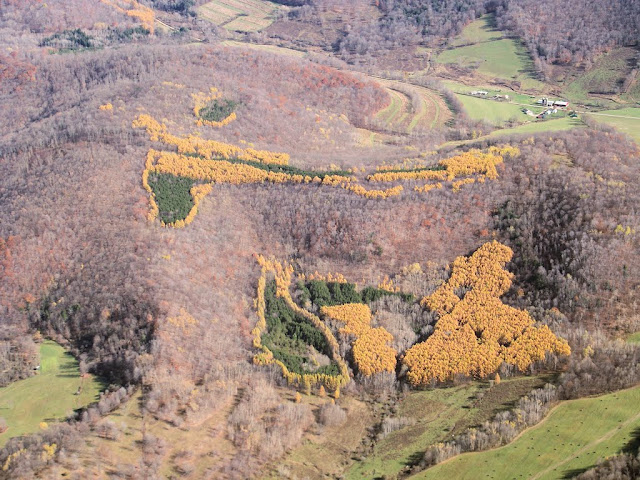 In places, patches of bright yellow coniferous trees really stood out against the barren hillsides.  Hopefully, these are the types of conifers that are supposed to change color in fall.  I found it curious that clusters of dark evergreens were surrounded by a single row of yellow conifers. 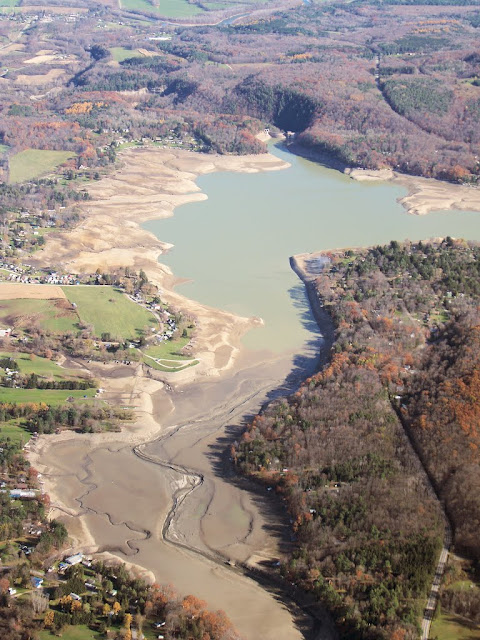 The Bear and I continued to sight see on the way home, enjoying our perspective high above the terrain.  We circled Rushford Lake, wondering what happened to all the water. 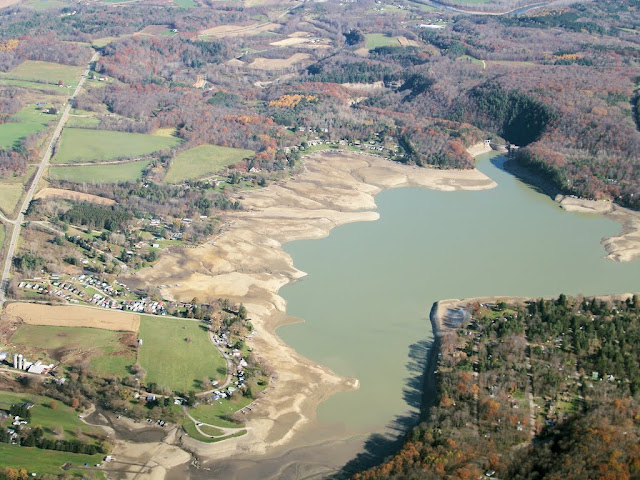 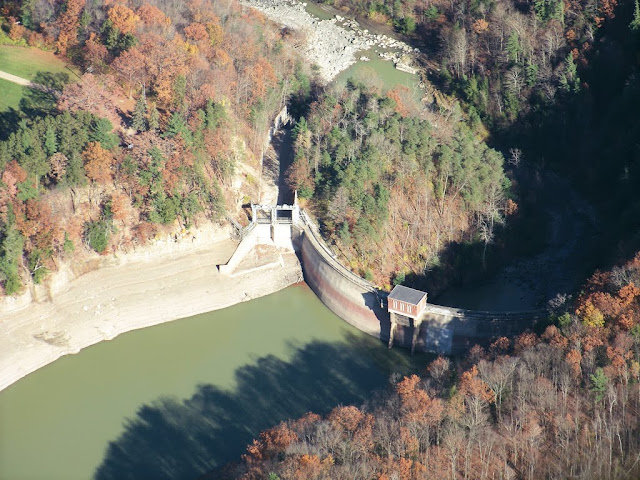 At the southeast end of the dried up lake, we discovered Caneadea Dam.  Maybe someone forgot to close the gate and all the water ran away?

The real answer is that the lake is drained every October so that residents can do their dock maintenance. 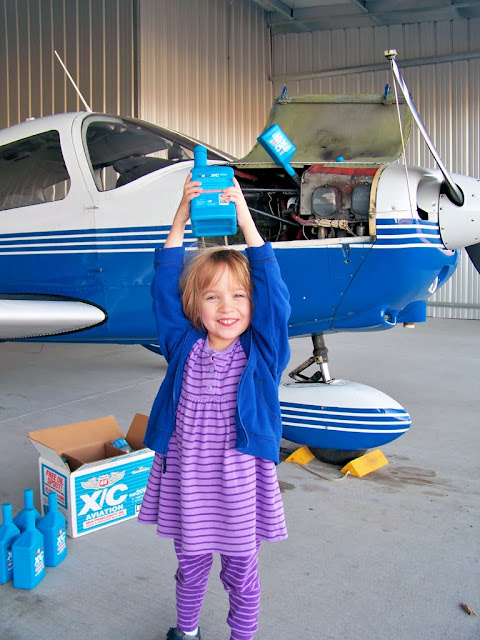 Back at Le Roy, The Bear assisted with her first oil change.  Then we cleaned up our mess, patted the Warior on the nose for giving us such a nice ride, and departed for home.  There may not be many more nice warm flying days in 2011.  I'm glad we were able to take advantage of this one.
Logged by Chris on Saturday, November 05, 2011 5 comments: