Wanderlust took hold this week, enabled by comfortably refurbished Warrior seats.  Kent was up for another flight.  But to where?  Many options were weighed and discarded based on time constraints, interest, and, in one case, an airport closure.  I returned to the well (www.adventurepilot.com) for more ideas and discovered an entry entitled, "Picnic on Sunbury Island Airport".  The website indicated this island to be in central Pennsylvania.  This seemed a little odd and inspired more investigation.

The island in question lies at the confluence of the west and north branches of the Susquehanna River.  Sunbury Island Airport is a 3250' turf field occupying the east end of the island.  There are no services offered by the airport, only a nebulous promise from the original Adventure Pilot poster of ice cream within 0.5 miles.  Good enough.

The airport was easy to spot, a mighty green swath of nothing that dominated the island.  Curiously, the field appeared to be outlined with large white objects.  Once in the pattern, these "runway markers" quickly resolved themselves as campers lining both sides of the field. 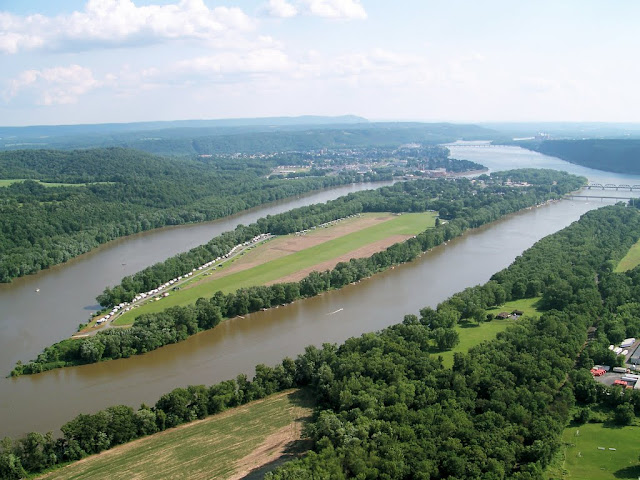 Turf landings are always a treat, particularly when the grass is cut short and the ground underneath is smooth.  Sunbury has the nicest grass runway I have ever used.  As we rolled to a stop, the campers and their camp-chair occupying denizens were visible on both sides.  It was somewhat disconcerting to drop out of the sky in the midst of a campground and I was relieved to see a proper airport sign verifying that we were in the right place. 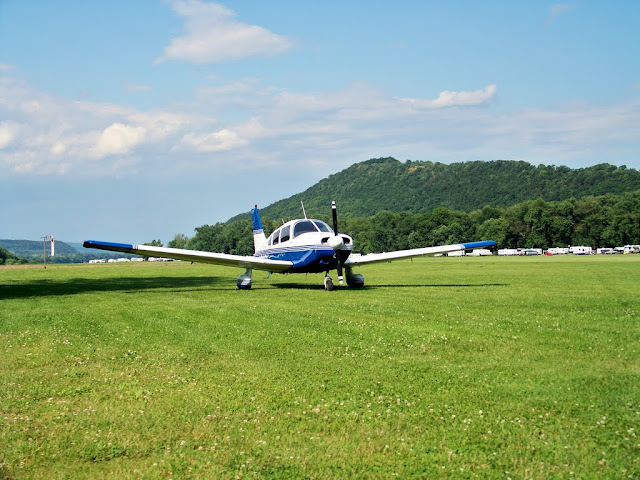 We left Warrior 481 on the field/campground and walked west in search of the fabled ice cream.  On the other end of the island we found Ross'.  While describing what we wanted to the teenaged girls behind the counter, our attempts at communication were met with befuddled looks and multiple, unwelcome offers for soft serve.  Isn't failure to communicate with younger generations a sure sign of getting old?   I did a mental review of my appearance.  Shorts hiked up far enough to chafe armpits?  Negative.  Black socks and white shoes?  Nope.  *Shrug*  With patience and minimal gesticulation, Kent and I emerged from Ross' carrying tiny cones topped with huge mounds of hand dipped ice cream.  My cone actually cracked under the load.  And it was good.  Since becoming a pilot, I've consumed many hundred dollar hamburgers and pancakes, but hundred dollar ice cream beats them all.

Departure from Sunbury was exciting.  The nosewheel came off the turf willingly, but Warrior 481 accelerated sluggishly with her mains still dragging in the grass.  Not quite at rotation speed, we hit a bump in the runway and were deflected skyward prematurely.  My bird was not yet ready to fly and told me so by mushing and squawking the stall horn.  I shoved the nose forward and the horn fell silent.  The airplane sank for a brief moment, then steadied in ground effect.  Airspeed rose rapidly and, when all was right with the world, we pitched away from the little island airport.

Why is it that Pennsylvania has so many great places to fly?  Aloft, we turned north and returned to boring old New York.
Logged by Chris on Saturday, June 27, 2009 No comments:

The Opposite of Congress

Tonight was my inaugural flight with re-upholstered seats.  This may sound trivial, but for minimal investment in raw materials and labor, my right leg no longer goes numb when I fly (there's a Master Card joke in there somewhere, but those are woefully passé').

After taking my new seats and old butt out for a test flight, I "flew-through" Dansville for dinner, then orbited the home base to take pictures of the runway extension progress.  1200 extra feet of phantom runway and taxiway extend east from the runway 28 threshold.  Soon, the Le Roy airport will be a very different place. 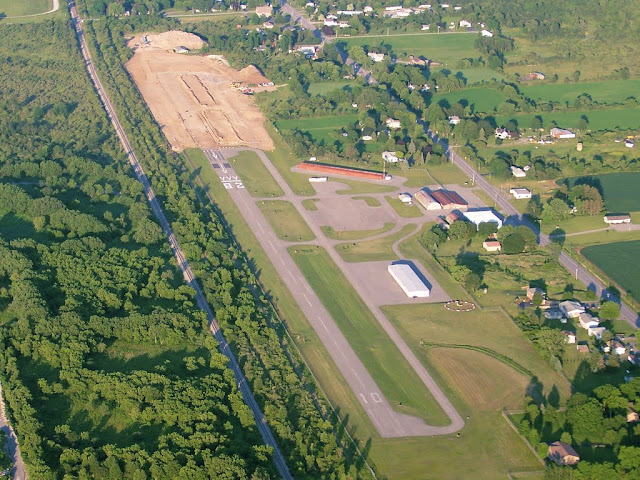 
Two weeks ago, I flew with a new (to me) instructor for my flight review.  Every instructor has a unique way of expressing himself (or herself) and, sometimes, a new instructor will say just the right words to make a concept snap into crisp focus.  So it was for me after a couple of hours with John.  The fact that John was the first instructor with Warrior experience with whom I've flown since buying Warrior 481 was just icing on the cake.  That Saturday morning flight review was time and money very well spent.

For my first time at the controls post-review, I decided to tinker with some of the new insights I gained a week previous.  In doing so, I found myself wheeling above the diverse countryside of western New York. 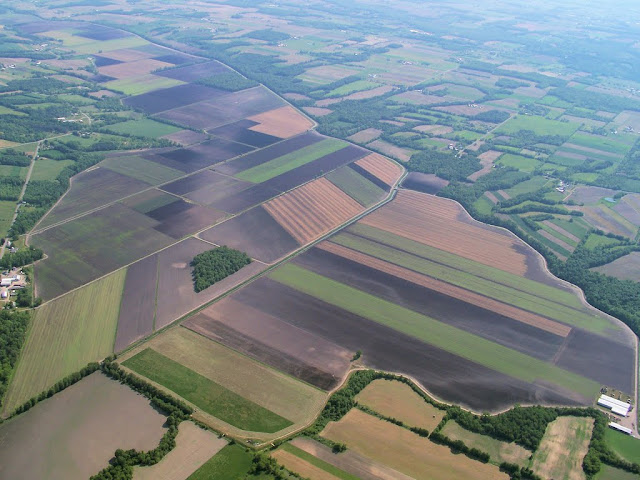 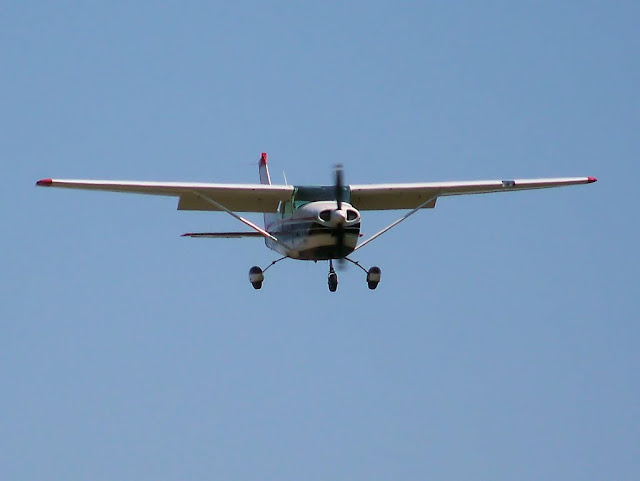 This anonymous Cessna was on final approach for runway 19 at Penn Yan while I waited to depart (sure, he broadcast his tail number during position reports, but I don't remember it anymore). 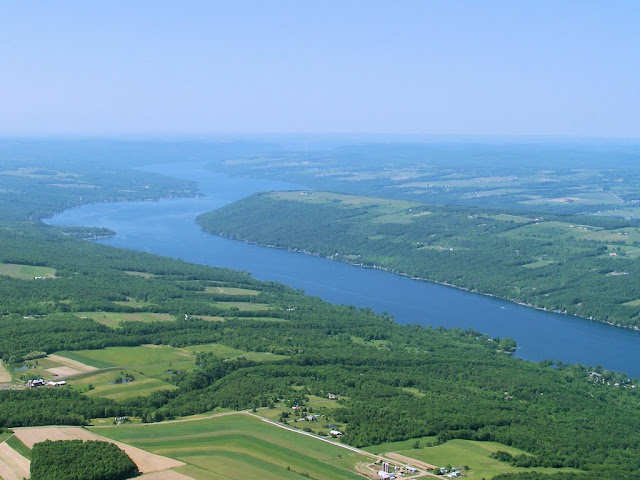 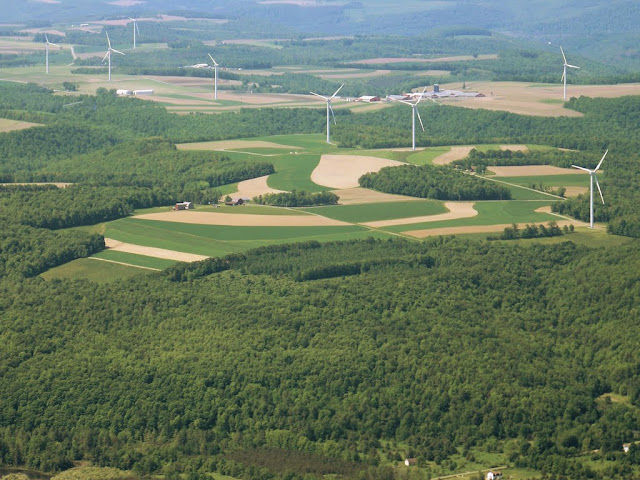 Windmills continue to spring from the soil in Western New York, turning lazily in the westerly wind.
Logged by Chris on Saturday, June 06, 2009 No comments: