When I hear the phrase "rust belt" I think of a specific geographic region: the upper Midwest where I grew up.  I recall derelict automotive plants in Pontiac that I used to see as a kid, painted dark brown with lots of little windows that were all broken.  While flying recently, the phrase came to mind again, but in a very different way.

I had a three week hiatus from flying imposed on me by a perfect storm of work, illness, and crummy weather.  As a result, I was unable to fly over Upstate New York while it was still dressed in its autumn finest.  Missed it by that much, as the man used used to say.  While there was still some color to be seen, much of the crimson had faded to rust.

Nature's rust belt does not exist as a place, but as a time reserved for tardy leaf peepers. 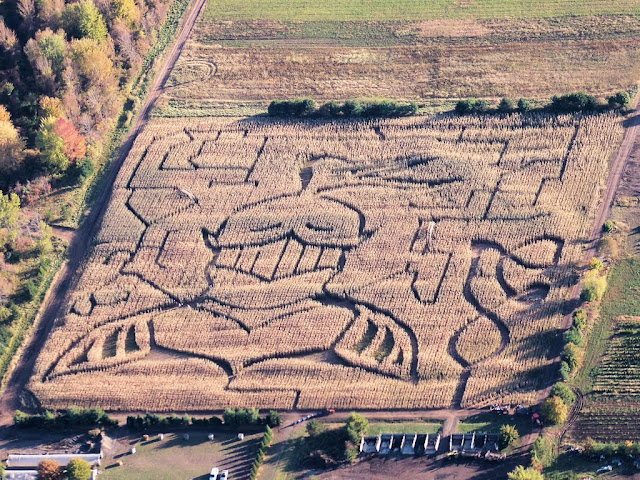 This is the corn maze at Cobble Creek Farms in Spencerport, NY.  Mere hours before taking this picture, Kristy and I explored this maze with friends while The Bear rode on my shoulders.  Signposts bearing verbose clues helped direct us through corn and spun a crazy tale about two knights ("ka-nig-its"), their falling out (yup, a chick was involved), and their eventual reconciliation. 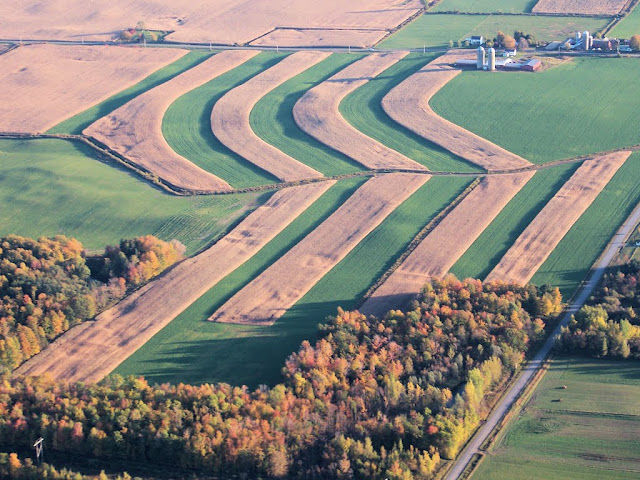 After photographing the corn maze, I flew south of Rochester to do an aerial Dance of Joy over finally getting back into the air (i.e., a bunch a steep turns, about as exciting as it gets in a Warrior) .  Along the way, I captured this shot (not while doing a steep turn).

The next day, I spent the afternoon aloft.  I decided that I wanted to fly a short cross country to someplace new and chose the Catskill Mountains. 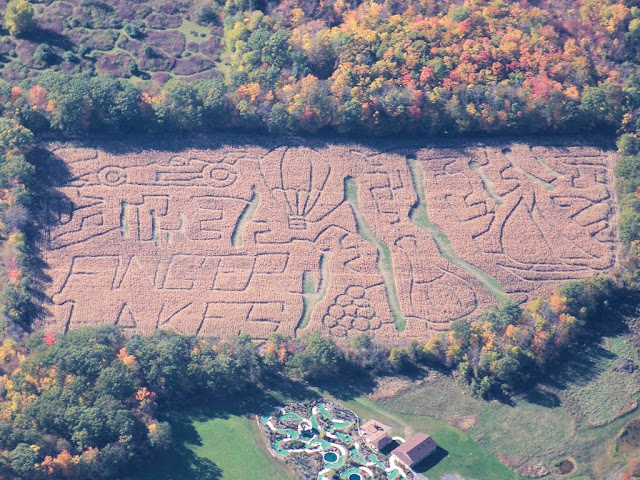 Along the way, I photographed this clever corn maze in Trumansburg, NY near the southwest end of Cayuga Lake.  For those unfamiliar with the region, the maze depicts all the Finger Lakes and some salient Upstate activities (auto racing, ballooning, winemaking, and sailing). 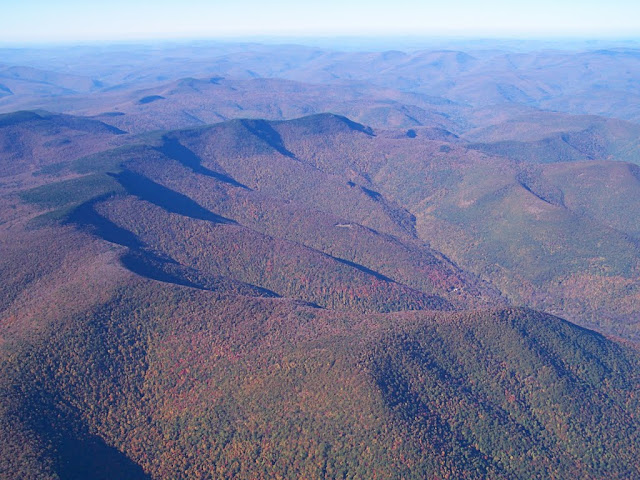 The Catskills were largely rust colored, with some individual flecks of color still visible.  Above a certain elevation, the peaks were dominated by evergreens.  From a distance, this gave all the peaks a somewhat darker, almost singed look as seen in this photo. 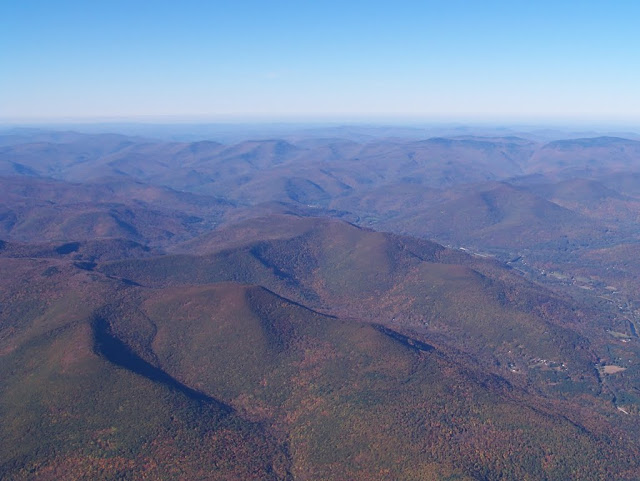 Another photo of the rusty Catskills. 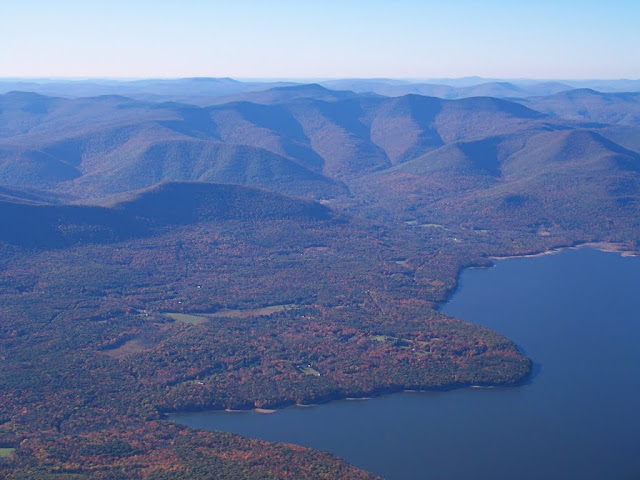 This photo looks west from near Kingston, NY.  I was on the southeast side of the Catskills.  The Ashokan Reservoir is visible in the foreground.  I landed at the Kingston-Ulster airport (20N, airport #98) for a brief rest and fuel. 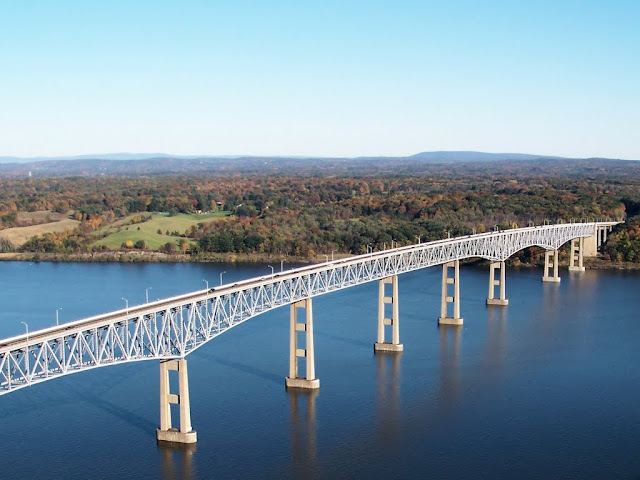 This is the Kingston-Rhinecliff Bridge spanning the Hudson River.  The western end of this bridge is extremely close to the approach end of runway 33.  The base and final legs of the pattern for 33 are flown over the river while pointed directly at this bridge.  It's a little unnerving and I could not help but wonder how drivers on the bridge reacted to aircraft in the pattern.  The airport itself was reasonably active; small, but well-equipped; and the FBO staff was friendly.  The selling point for me was the little picnic area on a hill overlooking the ramp, complete with gas grill.  It seemed like a terrific place and the fuel price was significantly cheaper than that available around Rochester. 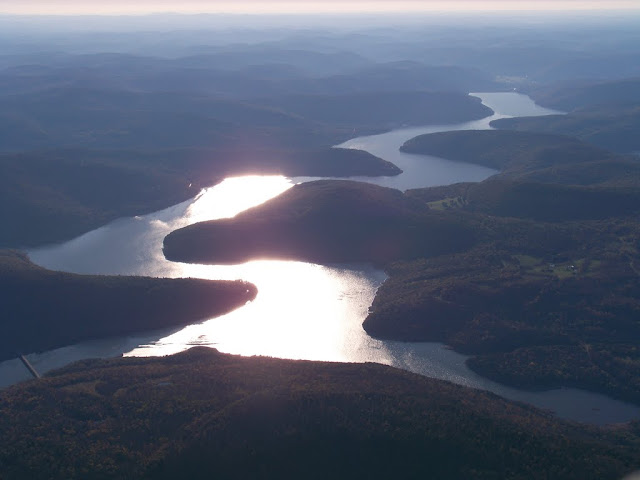 I departed around 4:00 in the afternoon, flying toward the setting sun.  The photo above shows the sun gleaming off the surface of the Pepacton Reservoir where the Catskills begin to dwindle into mere hills.  The flight home was wonderfully relaxing.  When I arrived at Le Roy, the winds were completely calm and I settled Warrior 481 onto the new runway in what had to have been my best landing of the year.  It was good to be back in the air again.