Recently, a group of aviation bloggers shared individual "origin stories" of how each one of them was bitten by the flying bug (disclaimer: there are no radioactive spiders in any of these origin stories).  The individuality expressed in each tale was a delight to read; common passions born from disparate experiences.

I was particularly struck by Ron Rapp's tale of slamming on the brakes while passing a flight school and making a snap decision that changed his life forever.  What I find interesting about Ron's story is that it goes beyond him being in the right place at the right time.  To my mind, it is about how a series of childhood experiences built upon one another until they were triggered at the appropriate moment.  I think our past experiences prime us to make such decisions, whether we are conscious of that preparedness or not.

Until the fall of 2000, I never had a conscious goal of becoming a pilot.  So...how did I get there?  I began to reflect on my own experiences and how they positioned me to act when I was in the right place at the right time.

As kids in the 1970s, my friend Bobby and I built a fort out of cinder blocks with a roof made of salvaged lumber.  Though we always referred to this drafty edifice as The Fort, the truth is that it was really a spaceship.  It was too ungainly, even in our imaginations, to be a sleek, single seat X-wing fighter.  Rather, it was the sort of craft that could travel between the stars, descending through the atmospheres of distant worlds to land on unexplored soil.  In this way, The Fort was more like the Millenium Falcon than a stodgy, space-bound capital ship like the Enterprise.  The front of The Fort was lined with a bank of sideways cinder blocks that formed a panoramic wall of windows like that on the Jupiter 2.  Inside, Bobby and I sat before the windows, piloting our ship through the galaxy.  A console was positioned between us (an old wooden telephone cable spindle) and a severed tree limb served as a control stick.  In The Fort, we became pilots and explorers without ever physically leaving the ground or even Lake Orion, MI.


The first airplane to become an object of my obsession was the B-29 Superfortress featured in the Disney-produced Elliott Gould film, "The Last Flight of Noah's Ark".  There was just something about the glassed-in nose that grabbed onto me and would not let go.  Perhaps it simply reminded me of everyone's favorite Corellian freighter.  I remember obsessively reproducing the B-29 in Lego (ok, it was a shoebox-shaped first approximation at best, but it had lots of windows up front).  Twenty four years passed between seeing that movie and my first close encounter with an actual B-29 (Fifi) on the ramp of the Kalamazoo Air Zoo.


My first flight came circa 1985, slung beneath a hot air balloon shaped like a giant beer bottle.  My stepfather was the beer and wine buyer for a major drug store chain in Michigan (which no longer exists, but Michiganders might recognize the logo on my tee shirt).  Through his connections, we met the Labatts "Flying Blue Crew" at a dawn balloon rally. 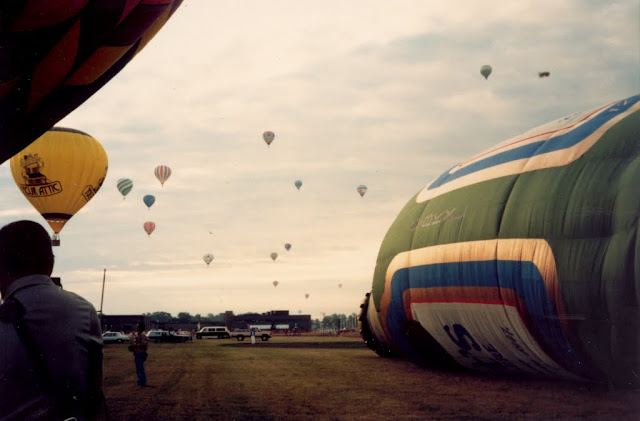 I was amazed to see the unique balloon take shape while surrounded by its more conventional, spherical-ish brethren.  For some reason, I was particularly intrigued by the detailed bottle cap.


My mother and I went aloft in the balloon.  We certainly cast an unusual shadow across the landscape compared to the other balloons.


I almost refused to go because I was terrified of heights (ok, I still am), but the tall sides of the wicker basket and the smooth air laid to rest any fear of tumbling out.  It was the most serene experience of my young life and my first bird's eye view of the world.  It made a lasting impression.

In 1999, I was in my final year of graduate school.  With the exception of time off to interview for jobs and marry my best friend in the world, I was working in the lab seven days a week and up to eighteen hours a day in a final push to finish my degree.  I was privileged to do some neat stuff in grad school at the interface of chemistry, physics, and biology.  But after five years of hard work, I was on the verge of burning out and I craved freedom.  Much of my laboratory time was spent in the dark (sometimes literally, sometimes figuratively), sitting beside a monstrosity that I had designed and built as a second year graduate student.  Experiments were run to the accompaniment of a chirping Q-switch that drove a pulsed neodymium-YAG laser.  I still hear that chirping in my sleep, a 5 Hz ostinato in the soundtrack of my life.


Near the end of graduate school, Kristy and I relocated to Kalamazoo, MI.  During that transition, I was driving back to my southern Indiana laboratory via eastbound I-94 when I passed the north end of the Kalamazoo / Battle Creek International Airport.  Arrayed across the ramp was a training fleet of single engine airplanes (what I later came to know as Cessna 172s) belonging to Western Michigan University.

After five years of near indentured servitude, I was on the cusp of emancipation (graduation).  I looked at those ungainly birds and thought to myself that there could be no better expression of true freedom than learning to fly someday.

But this was an idle thought, quickly lost in the chaos of defending a dissertation.

I also fell victim to a common fallacy.  I did not personally know anyone who flew and believed that it was beyond the reach of "ordinary" people like me.


Kalamazoo was my own personal Kill Devil Hills, where the dream of flight became a tangible reality.  Part of this inspiration came from the presence of the Air Zoo, a world class aviation museum located there.  I was so inspired by the place that I became a docent.

I joined The Company in 1999 after a long hiring freeze, thus becoming one of a cohort of younger scientists hired that year; the next generation.  Part of this cadre was Kent, another Indiana graduate student who graduated before I did.  Another was Dave, an exceptional scientist and private pilot.


I remember learning that Dave owned an airplane.  "You have your own plane?"  I said to him, while gaping in awe.  "You have to take me flying sometime."

How was I to know that any pilot worth his salt would be so eager to indulge?

In the fall of 2000, Kent, Kristy and I joined Dave at a battered t-hangar in Dowagiac, MI - a field from which I would solo roughly one year later.  We helped him extract his pristine red and white American Champion Citabria from the ramshackle hangar.

We departed from a turf runway, the best way to experience a taildragger.  Once aloft, Dave surrendered the controls to me and pointed to a nearby lake.

"Fly a circle around that lake."  He then grasped the airplane's steel tube skeleton with both hands to demonstrate that he was not on the controls.

I was out of my comfort zone, but gingerly grasped the stick and coaxed the Citabria into a shallow bank.  The controls were surprisingly responsive.  I pushed the stick left to bank the aircraft and the Citabria pushed back as her ailerons deflected into the air.


As I pushed more, I could feel the pressure in the controls change, continuously telegraphing the interaction between the airplane and the air that held it aloft.  The experience imparted an incredible feeling of freedom and control.

While at the controls of that airplane, physics actually sang to me.

The ride was soon over, but the hook was set.


Over the Activation Barrier

Potential energy built over the years like a spring forcibly compacted.  Youthful adventures in The Fort, the fascination with spaceships and airplanes, seeing the world from a new perspective from the basket of a hot air balloon, and contemplating the WMU training fleet at Kalamazoo when I sought freedom above all else; all of these things built on one another, waiting for just the right catalyst.

Dave was that catalyst.  As an aircraft owner and part of my peer group, he demonstrated that it was all within my reach.

I knew in that moment that I had to learn to fly.


Within a month, Kent and I started a ground school course via Kalamazoo Community College.  To this day, I am still not quite sure what our instructor, who held a fresh bachelor's degree from Western Michigan University, thought of us; two recent PhDs sitting in the front row peppering him with questions and challenging anything that violated known laws of physics (such as the popular "equal transit times" myth he used to explain lift).  I am, however, quite certain that we annoyed the heck out of our classmates, several of whom were struggling to pass (and many of whom did not).

Comparing notes with Kent made flight training far more enjoyable, especially because we view the world through a similar lens.  But mentorship from Dave, the experienced aviator who always listened, encouraged, and offered suggestions where warranted, was a significant contributor to my success.

I earned my private pilot certificate on September 23, 2002 with training from the fine folks at Conrad Aero in Three Rivers, MI (20 minutes south of Kalamazoo).  I managed to beat Kent to the check ride by a month because of my "better qualifications" (i.e., dumb luck, better weather, and an ounce of opportunistic behavior).


Returning to the original question, how did I get here?

I think it was a combination of the right experiences and the right people at the right times.  I am thankful to everyone who helped (and continues to help) me along the way.

Though my journey through aviation is nowhere near complete, in some ways I feel that it has come full circle.  Each landing at a new airport recalls the days of exploring "strange new worlds" in The Fort with Bobby (who also went on to earn his private pilot certificate).  The only difference now is that these new places actually look different (because they are different), rather than being imaginary embellishments of the same farm in Lake Orion, MI.  It seems to me that "growing up" only means that the games we play become more sophisticated.

Like Ron, I made a "snap" decision to pursue flight training.  But I have to wonder, was it really that abrupt?  I believe that the foundation built by my past experiences primed me to act as I did.  Without those experiences, it is possible that my ride with Dave would have amounted to nothing more than an interesting, one-off memory.
Logged by Chris on Sunday, May 12, 2013