Future Memories Made and Captured

The first breakfast flight for me and The Bear of 2015 was postponed as we searched the house in earnest for her little red Kodak camera. I found it in her "jewelry" drawer, where it had lain fallow under a pile of Silly Bands since our flight to the Thousand Islands in 2014. 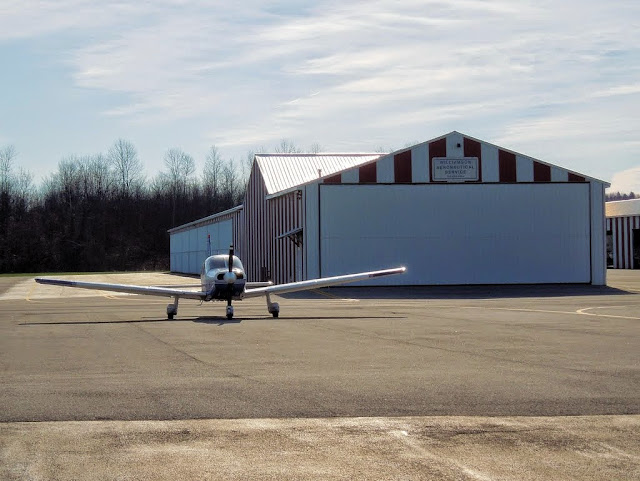 When I photographed the Warrior, it was backlit by the morning sun, imparting a brownish cast to the image that reminded me of a 1970s era photograph. Thinking back to my childhood, I realized that there were few photographs of me out on adventures with my Dad when I was The Bear's age. We usually went out as a family and my Dad and I did not really share any common interests. 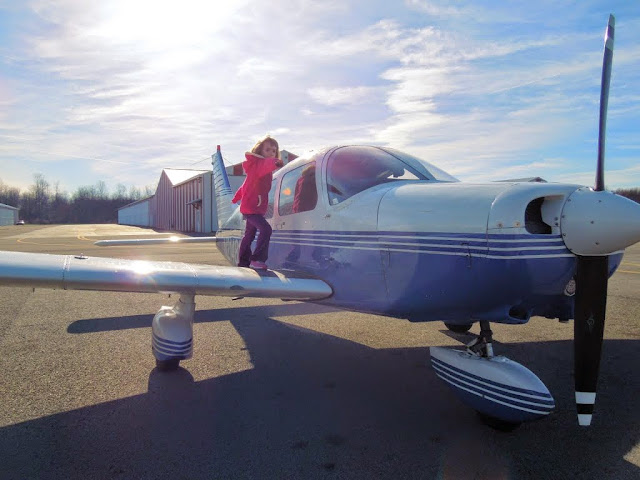 Fortunately, I think I have a stronger relationship with my diminutive aviatrix. Among other things, The Bear and I have flying and taking aerial photographs as things we mutually enjoy. And, of course, we have Star Wars (she has now seen every movie, watched every episode of The Clone Wars, and is eagerly anticipating Episode VII this Christmas). 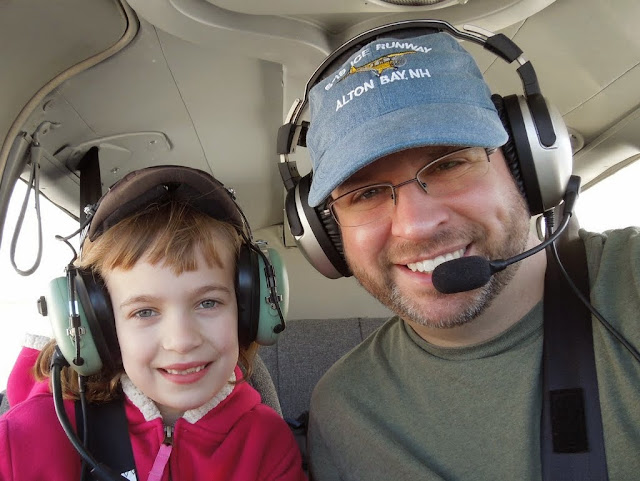 After I took a pre-flight shot of us with my camera, The Bear extricated hers from its pouch and contributed her own to posterity.


In hindsight, it is clear to me that having longer arms grants more flexibility when it comes to selfies. Still, if imitation is the sincerest form of flattery, I was happy to have her join in. 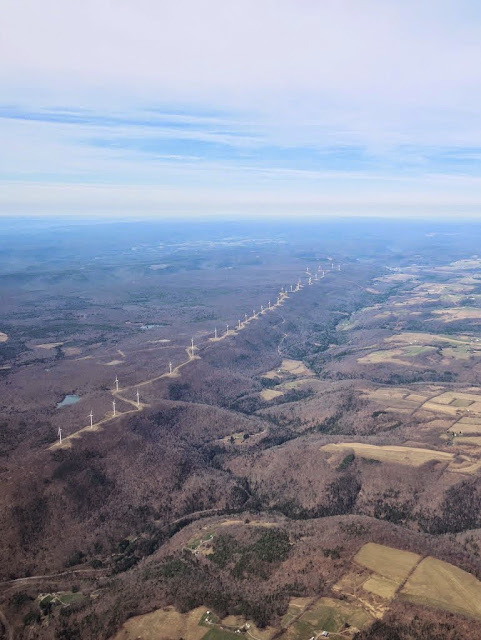 We flew an hour at 6500 feet from Sodus to Williamsport, Pennsylvania for breakfast. The Bear did not ask to take the controls that morning and, in cruise, was busily reading Harry Potter and the Sorcerer's Stone. Now that she is older, I have enjoyed reading some of my favorite books from childhood to her: The Hobbit, Mrs. Frisby and the Rats of NIMH, The Chronicles of Narnia, and the Prydain Chronicles to mention a few. We definitely have congruent tastes in books. 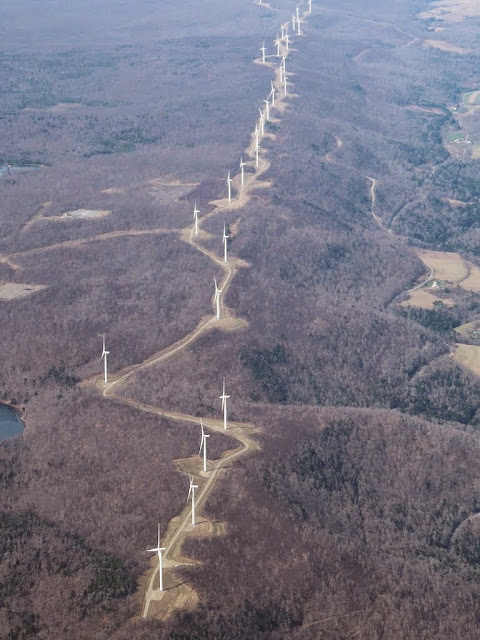 North of Williamsport, we flew over a ridge line ornamented with wind turbines. Seeing them, I recalled flying IFR in the weather over Pennsylvania en route from Virginia to New York last summer. Through a rent in the clouds, I spied these same turbines and savored their appearance as a visual herald of familiar territory.


Once New York Center passed us to Williamsport Tower, The Bear helped spot the airport and began firing off shots of the landing. This was my favorite. 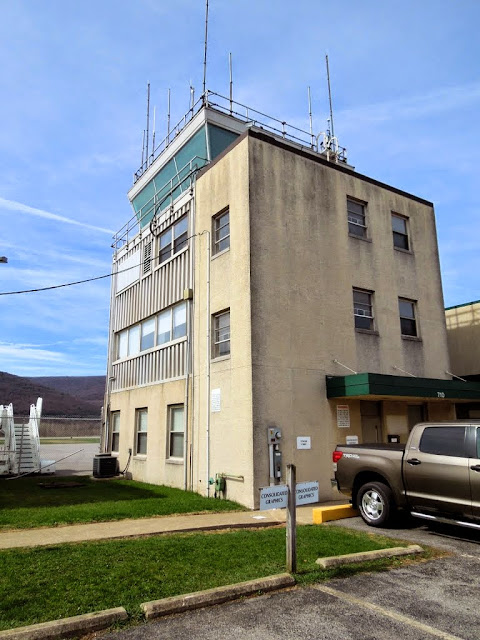 We exited the secure parking area on foot through a security gate and made for the street side entrance of the terminal. Along the way, I paused to photograph Williamsport's modest tower. 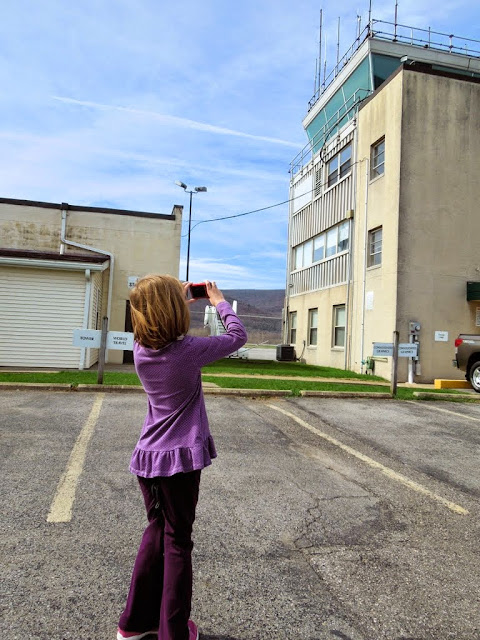 When I continued on, The Bear moved to the exact spot where I had photographed the tower and captured her own image of it. 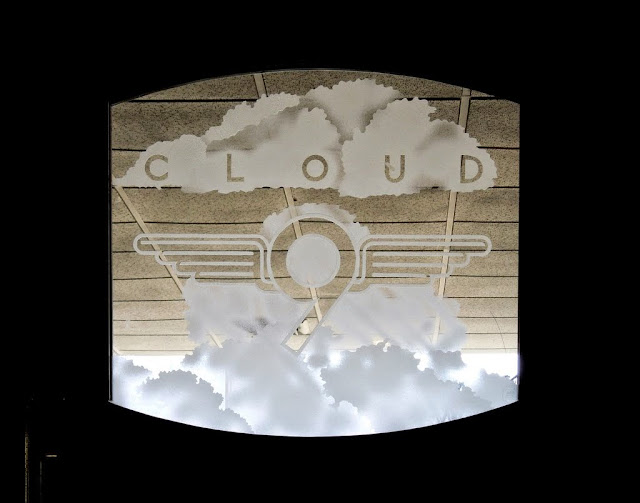 We made our way upstairs to the always excellent Cloud 9 restaurant. 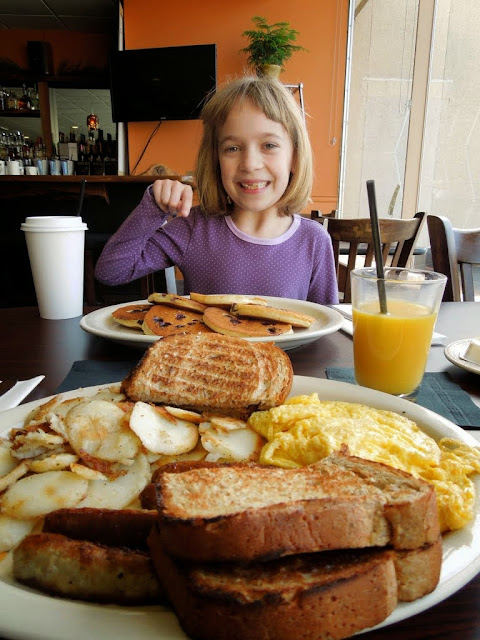 The Bear ordered the special, six blueberry pancakes. Clearly, Cloud 9 does not have children's portions.


The Bear earned her hipster cred by taking an Instagram-worthy photo of her meal before gorging herself on its amazing, light fluffiness.

Outside the restaurant windows, two airport staffers were apparently engaged in a highly regimented training session. One of them "flew" recklessly around the commercial ramp with her arms outstretched while the other fruitlessly tried to marshal her to parking with orange batons. They provided our sole source of ramp entertainment; no actual commercial flights appeared that morning. 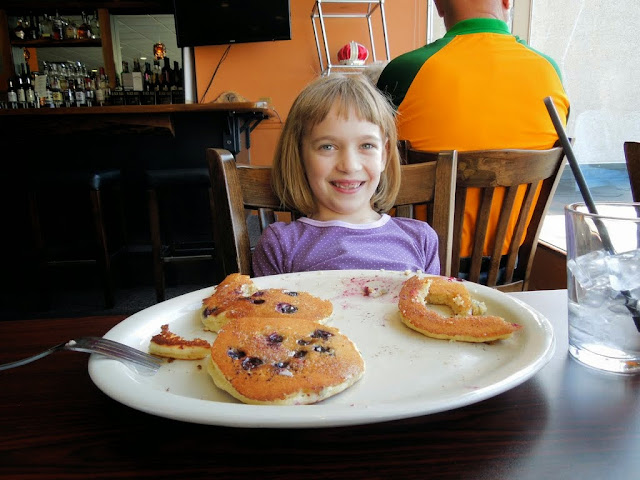 Aftermath; The Bear left parts of two pancakes behind in her voracious wake. 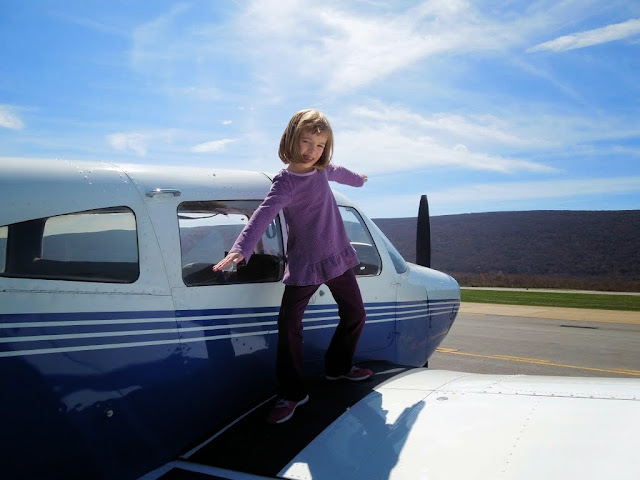 Back at the airplane, I had another idea up my sleeve. I suggested that we stop at Dansville, NY on the way home for ice cream. This idea was embraced enthusiastically.


On approach to Dansville, we watched a yellow Pawnee make a downwind departure from the grass with a glider in tow. The Bear was entranced by this tethered formation flight and, despite talking about taking pictures of the two aircraft, completely forgot to do so. They turned across our path on downwind, then climbed toward the hills surrounding the airport, Once they were no longer a factor, I returned my attention to landing the airplane. For her part, The Bear snapped photos of the approach. 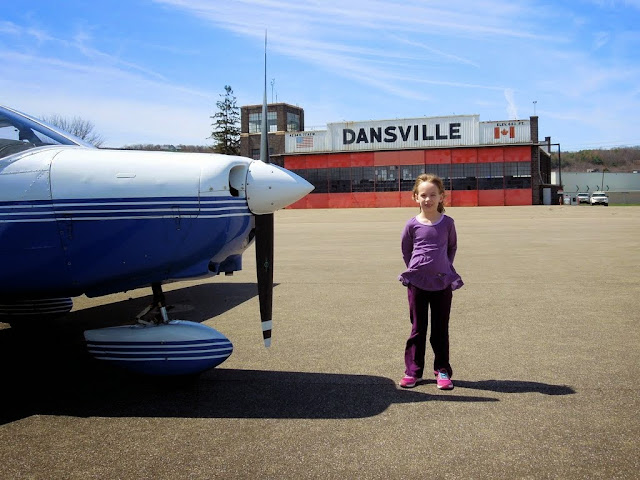 Wind at Dansville was running from the southeast in the low teens and gusting into the low twenties. While I photographed her on the ramp in front of the World War II era hangar dominating the field, The Bear had to hold her shirt down to keep it from blowing over her head.


Once I had my photo, The Bear firmly instructed me strike a similar pose. "Daddy, move over, you're blocking the name on the hangar!" She is learning to frame her pictures.

I set her on my shoulders and ambled across the street where I bought soft serve ice cream cones for each of us. She did very well with hers; no drips! 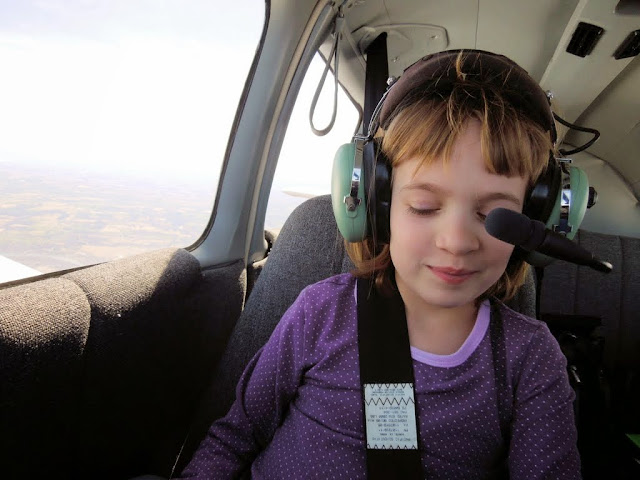 After departing Dansville, we emerged from the hills and climbed for altitude. In smooth air en route to Sodus, The Bear returned to Harry Potter and the Sorcerer's Stone, a content smile appearing on her face as she read. I love that little smile.

I also love the fact that we have these days together, just the two of us, to roam the sky and go wherever we want. I relish the memories that live in all the pictures we have taken of our exploits together. I am even more gratified that our moments together mean enough to her that she chooses to capture her own memories of them through her own camera eye.
Logged by Chris on Sunday, April 19, 2015 6 comments:

Email ThisBlogThis!Share to TwitterShare to FacebookShare to Pinterest
Labels: $100 Hamburger, The Bear

With spring on its way, even the impressive ice cap on Lake Ontario is disintegrating. 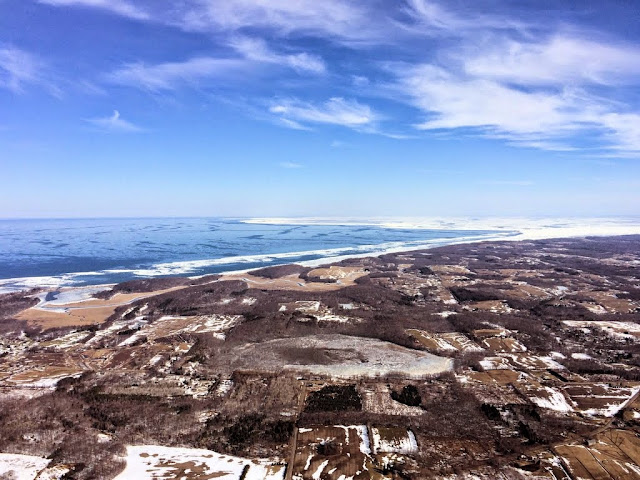 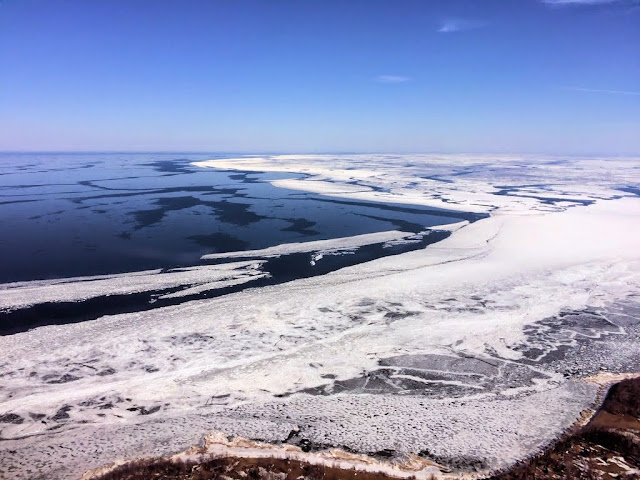 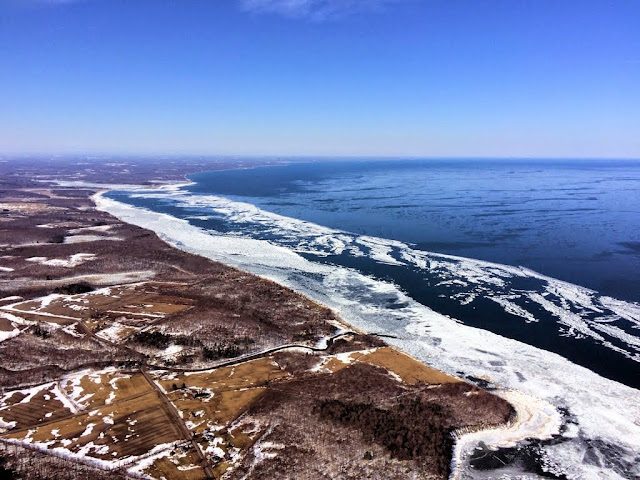 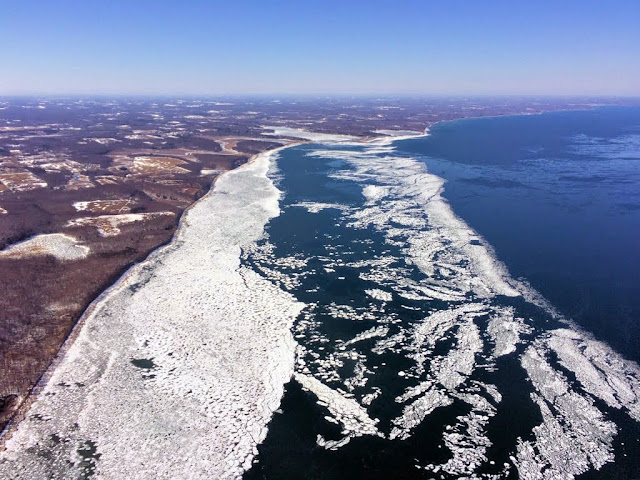 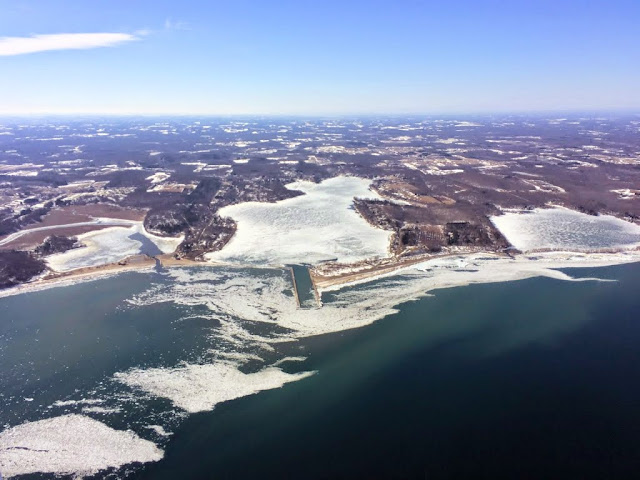 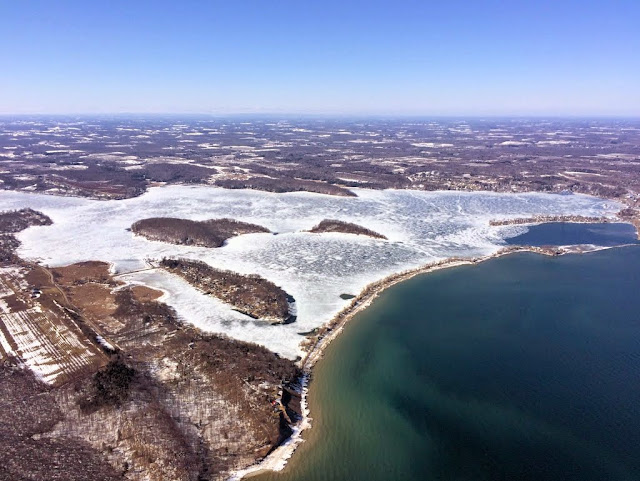 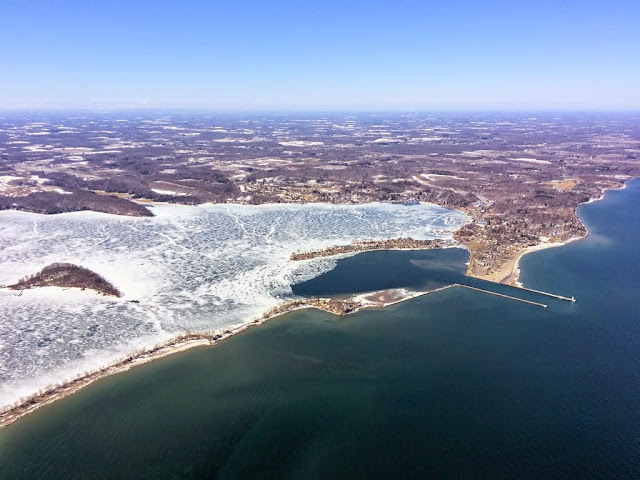