Fly-in breakfasts are a grand tradition in aviation; they are fundraisers, social gatherings, and -- most importantly -- excuses for pilots to fly somewhere.  Everyone has to eat sometime, right?  On the morning of May 16, I went to my first fly-in breakfast as an airplane owner.  Our destination was Torchport Airport, an airpark located between Torch Lake and Grand Traverse Bay in the northern part of Michigan's lower peninsula. 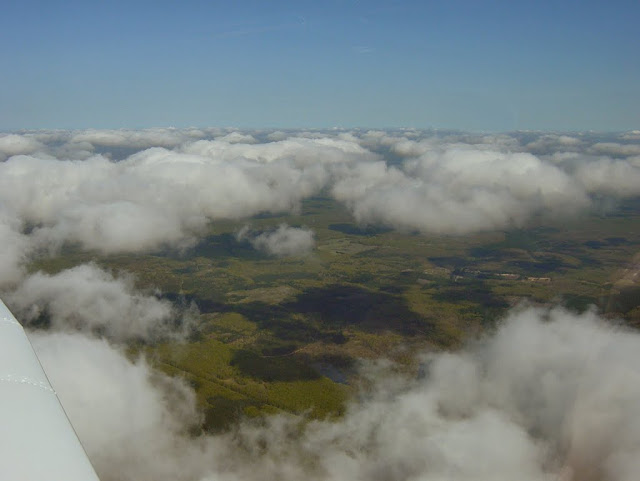 Three pilots in three aircraft departed South Haven that morning; me in Warrior 481, Dave in his Decathlon, and Ron in his Cherokee 140.  On a northern heading, we fell into loose formation.  Before we reached Muskegon, a layer of scattered clouds formed below us.  I followed my friends with some trepidation.  I had never flown any great distance over clouds and worried about being trapped above them.  Fortunately, significant holes existed through which I could still see the ground.  I also took comfort in knowing that, with full fuel on board, I would be able to return to South Haven if the clouds were too thick to land at our destination.


"I'm on the zipper," Ron announced.  This was Ron-Speak meaning that the little airplane avatar on his GPS display was superimposed on the dotted course line.  GPS was still relatively new to me; I did not fly with one until I bought Warrior 481.  Even with it, I took great comfort in tracking my progress on a current sectional chart.  Ron thought I was crazy or, at best, wasting my time.


Dave, trained in formation flight, entertained himself by flying off of my starboard rear quarter for a while.  For variety, he pulled away and joined up with Ron's white Cherokee.   Radio chatter was minimal.  We simply flew over the clouds. I was awash in the experience of going someplace in my own airplane.

The silence was suddenly broken by a surprised exclamation from Dave.  This was soon followed by Ron cackling on frequency.  While flying in formation, Dave focuses all of his attention on the spacing between himself and the other aircraft.  As a result, he depends entirely on the lead pilot for navigation.  Ron deliberately passed too close to a small cloud such that Dave momentarily found himself blind, engulfed in a white haze.  The unpleasant surprise only lasted a second; Dave blasted through the tiny cloud so quickly that he was already back in the clear before his brain could process what had happened.  Ron was very pleased with himself for this prank.  Dave decided to fly off of my wing for the remainder of the trip.

South of Traverse City, the cloud layer vanished and we could see Grand Traverse Bay ahead.  The Torchport frequency was busy, but our arrival was late enough that we mostly heard departing traffic.  Still, I was nervous.  Fly-in breakfasts can get busy and I did not have a lot of experience flying near congested airports.

Ron pulled ahead of us and broadcast our arrival on Unicom.  "Torchport traffic, flight of three, five miles south, inbound for landing, Torchport."  I had never been announced as part of a flight of three before.

Torchport had two crossing turf runways.  Still a little nervous about landing at an unfamiliar, busy airport, I slowed down to let Ron and Dave go first.  As I turned on final, Dave was taxiing to parking on the edge of the inactive grass strip.  People walking along the active runway stopped to watch my approach and landing.  It was a good one and Warrior 481 settled gently to the ground.  Obviously, my time spent working on landings since bringing the Warrior home from Oklahoma was well-spent.  A man standing near my touchdown point smiled and gave me a thumbs up. 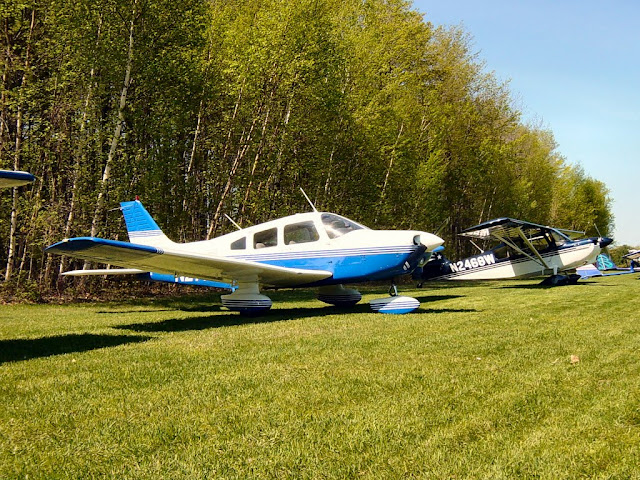 Taxiing for parking, I made a newbie mistake and got stuck in a soft spot near the edge of the runway.  I switched off the engine and several pilots ran over to help me push Warrior 481 to an appropriate parking spot.  Pilots are great that way; they take care of each other.

Breakfast was almost over, but there was still enough food and it was good.  We listened to a sales pitch (Torchport was soliciting buyers for various lots at the airpark), talked with other friendly pilots, and generally had a good time.  Impatient to be aloft, Ron departed ahead of Dave and me.  We wished him a pleasant trip home.  Our plan was to fly north to the mouth of Grand Traverse Bay, fly across it to the west, then follow the west coast of Michigan back to South Haven. 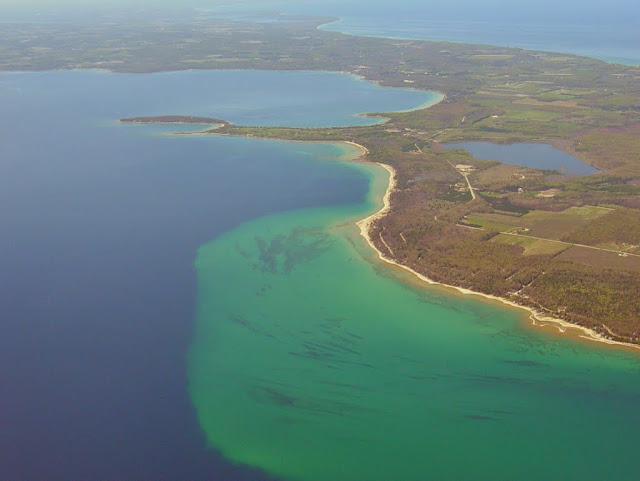 As we flew across Grand Traverse Bay, we beheld some interesting colors in the water.  At first, I thought the color was caused by something in the water, but I later decided that the lighter colors were caused by shallow areas near shore.  Lake Michigan was incredibly clear that day. 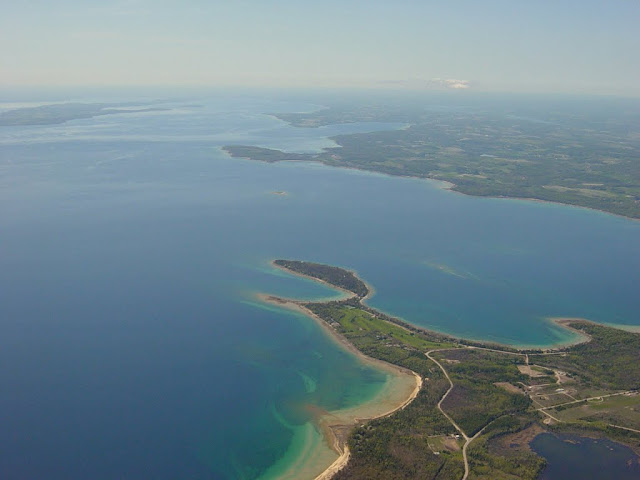 This photo was taken looking south over Grand Traverse Bay. 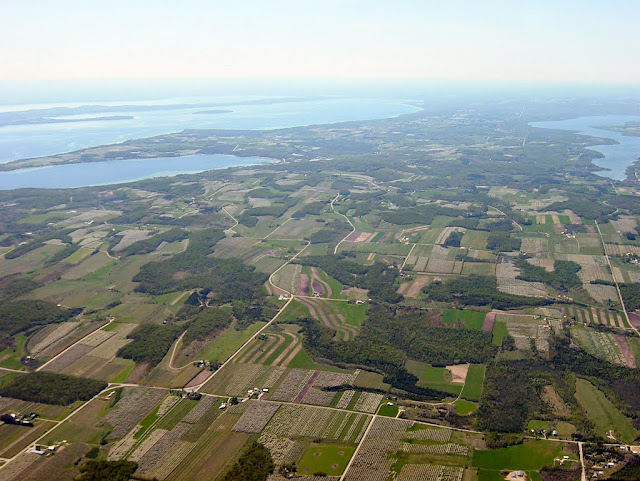 This photo was taken looking south near Northport, MI.  I don't know what was growing down there, but it made for an eye-catching vista. 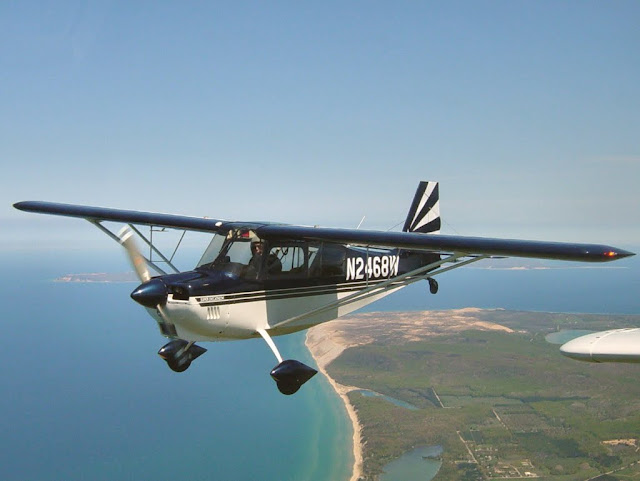 In the legend of the Sleeping Bear, a mother bear and two cubs set off across Lake Michigan from Wisconsin in search of food.  Exhausted, the two cubs drowned within sight of the Michigan shoreline.  Ojibway legend held that the large, humped dune on the shoreline represented the mother bear waiting in vain for her fallen cubs, staring out across the water at the two islands marking their final resting places. 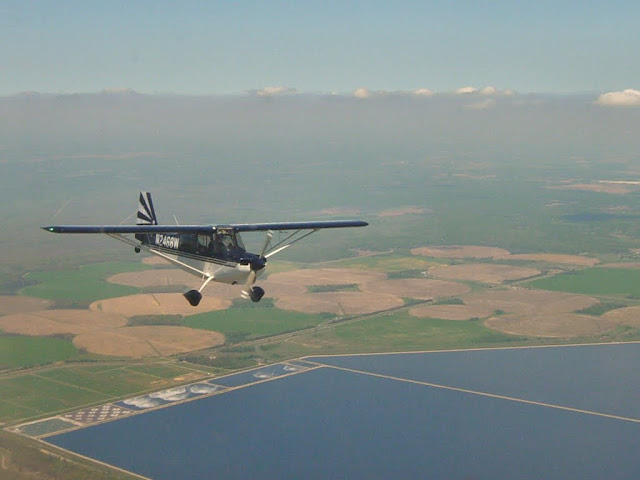 Just north of Muskegon, Dave announced that he needed fuel and we turned inland.  East of Muskegon, we flew above this mammoth manmade lake.  Our fuel stop was at Fremont, MI.  Nothing was happening at Fremont, but the folks at the FBO were friendly. 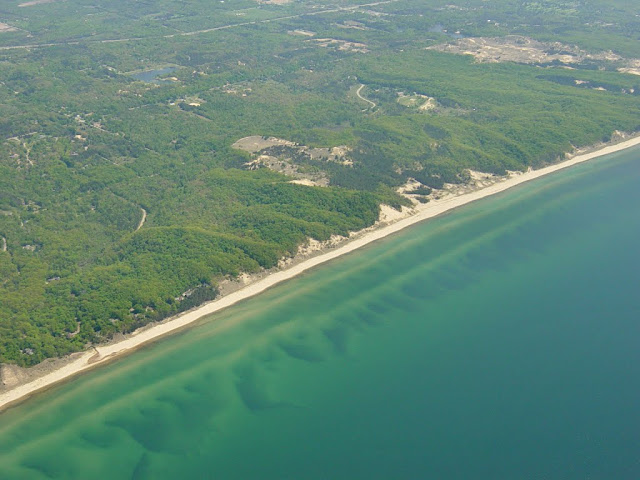 From Fremont, we flew a southwest diagonal to rejoin Lake Michigan and, eventually, home base at South Haven.  The lake water was so clear that the undulations of the sandy bottom near shore were visible.

Ron, of course, was already back at South Haven when we landed.

"Did you guys fly over Manistee?"

Dave and I glanced at each other.  "Yeah," I responded, wondering where the conversation was going to take us.

"I was getting fuel there and someone on the ramp pointed up and said, 'there's something you don't see every day, a Decathlon flying wing on a Cherokee'.  Figured it had to be you two."  He was right.

It was a great morning that will not be soon forgotten: the image of the Decathlon hovering nearby, the cross country flight over a soft cumulus vista, the journey to someplace new.  A sampling of the possibilities open to a new aircraft owner.

Where would this new found freedom take me in the coming years?
Logged by Chris on Sunday, May 16, 2004 No comments: