Dan and I launched into clear frigid skies at 9:00 am in Warrior 481 and turned southeast toward Philadelphia.  Our destination was Reading Regional Airport / Carl Spaatz Field, home to the Mid-Atlantic Air Museum (MAAM).  From our vantage point at 5500', we saw the low flatlands around Rochester give way to large hills surrounding the Finger Lakes.  As the landscape rolled beneath us, the hills eventually transformed into the crisp, east-west ridges of central Pennsylvania.  The air holding us aloft parted like still water around the Warrior's hull, passing us smoothly on toward our destination. 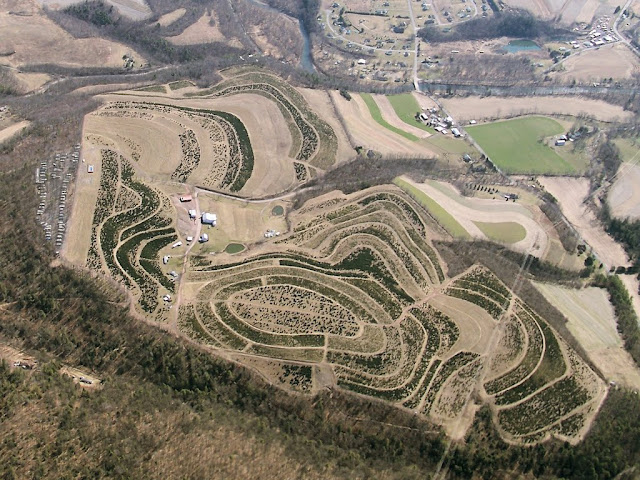 The terrain sliding under our wings was not particularly photogenic.  It lacked autumn's blush or the emerald palette of spring and summer.  Despite this, it yielded some interesting sights along the way.

On approach into Reading, another pilot reported a flock of geese north of the airport.  Air traffic control described the dense airborne flock's position to us, identifying it as a primary radar target.  No altitude information was available; the darn geese evidently had their transponders switched off.  With light flashing across their active wings, the flock's chaotic formation flight eventually passed a few thousand feet beneath our port wing.  This was the first time a flock of birds had ever been called out to me on radar, but everyone is sensitive to the issue after the double bird strike experienced by Flight 1549 over the Hudson River. 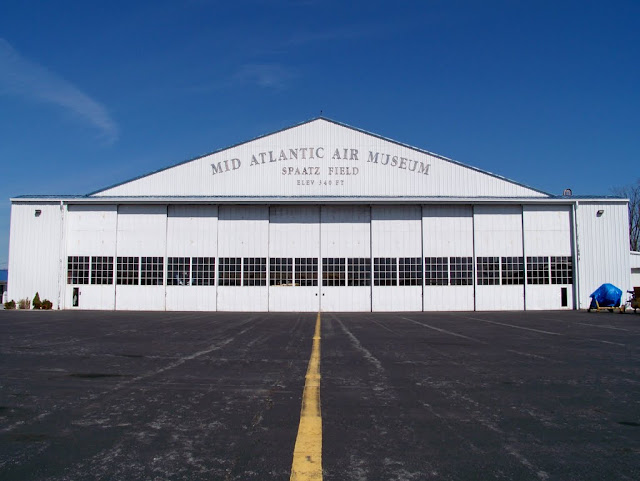 Reading became the 86th airport I have landed at since I started flying in 2001.  For obvious reasons, the museum was easy to find (see above).  MAAM's single hangar building is remarkably tightly packed with aircraft, making it difficult to get many clear photographs.  The collection was modest, but noteworthy as shown by the examples below. 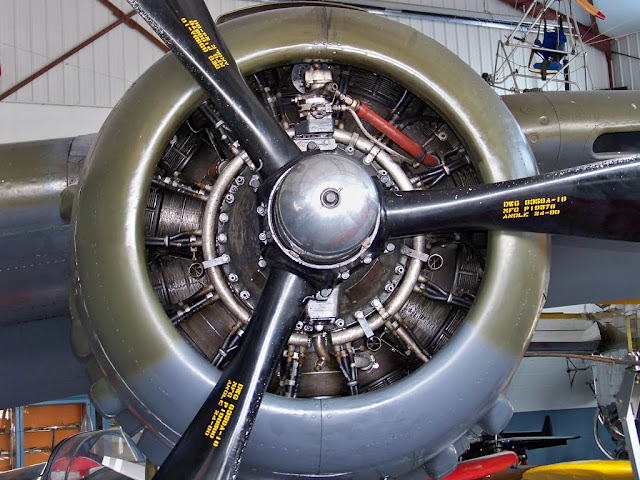 This is one of two Wright R-2600 radial engines on the museum's airworthy B-25 Mitchell, "Briefing Time".  The R-2600 is a 14 cylinder engine that produces about 1700 horsepower on takeoff.  I love radial engines.  They are true works of mechanical art.  With that said, I'm glad my Warrior's comparatively unexciting O-320 does not carry the maintenance burden of a round engine. 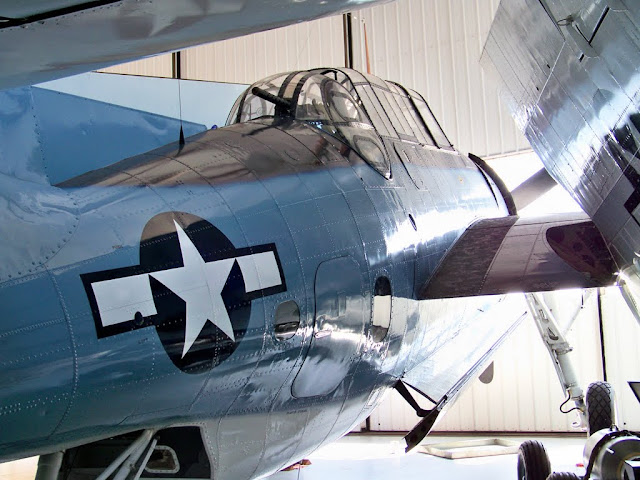 From my position under the horizontal stabilizer of this Grumman Avenger, oblique lighting highlighted the rivets along the large torpedo-bomber's fuselage.  The Avenger was the durable, if somewhat ponderous, aircraft flown by George Bush (senior) in World War II. 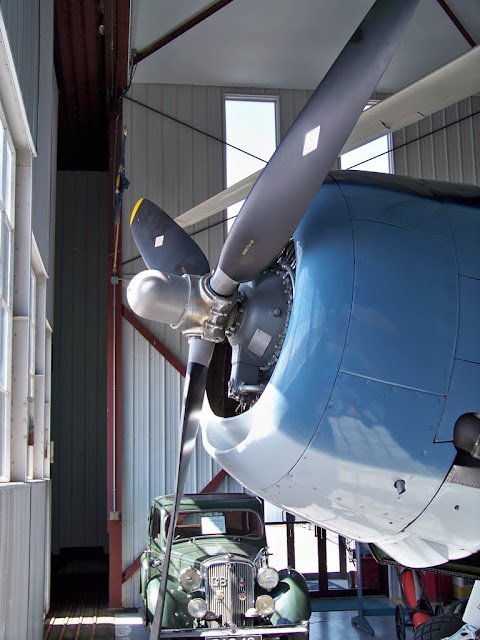 The Avenger lifts its face to greet sunlight pouring in through the hangar windows. 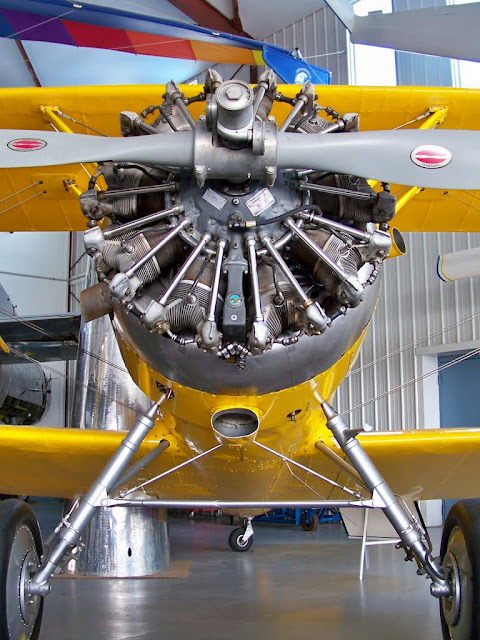 This is the end of the museum's gorgeous N3N biplane that makes all the noise. 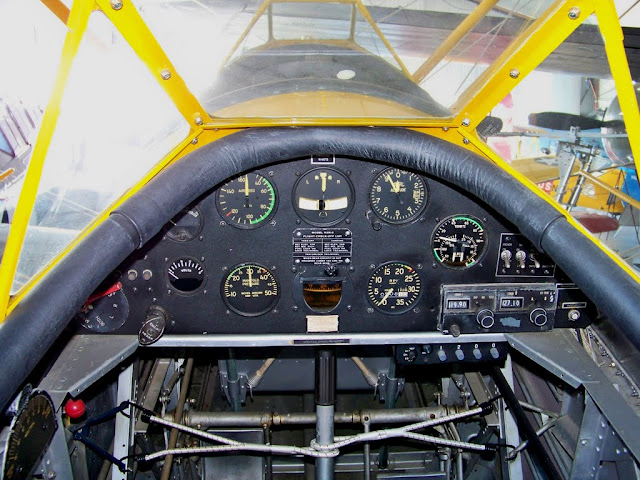 This is what a solo pilot flying the N3N would see from his vantage point in the rear cockpit.  The King radio in the lower right corner of the panel is most certainly not original equipment for this biplane. 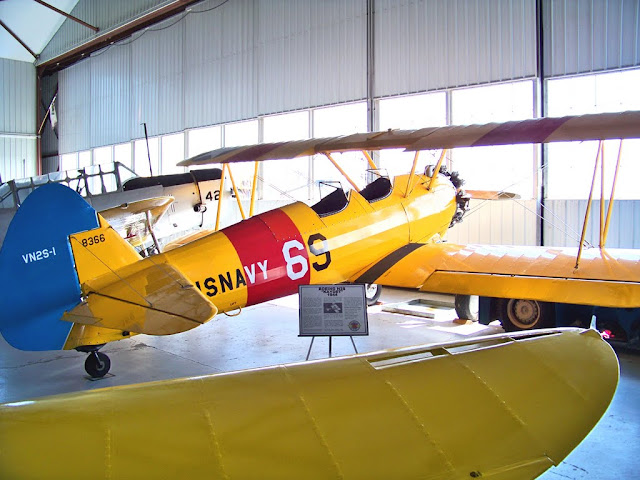 The collection also included this beautiful, airworthy Stearman.  Being close to a Stearman again brought back wistful memories of morning flights in Dave's Stearman at my former home base in South Haven, MI. 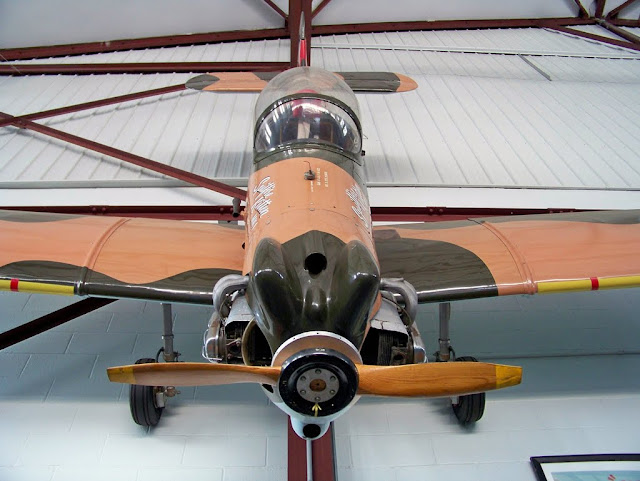 Our time at the museum was well spent with one of the museum's knowledgeable volunteer docents, who shared with us unique stories of how many of the displayed aircraft came to MAAM.  The museum also had an extensive collection of homebuilt aircraft cleverly hung from the rafters or on the walls like this diminutive "Spitfire". 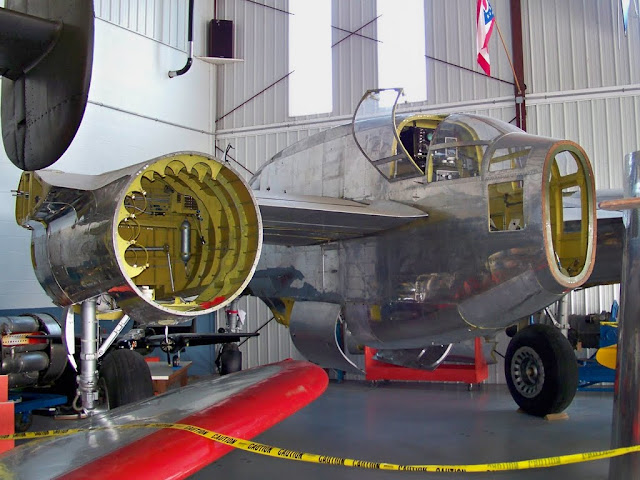 The primary draw of the museum was this odd looking piece in the back corner of the hangar.  This is the rear quarter of a P-61 Black Widow, the first purpose-built night fighter of World War II.  Unfortunately, with the tight packing of aircraft in the hangar, this is the best shot that I could get.  The open canopy at the rear of the aircraft was where the radar operator sat.  MAAM was formed explicitly for the purposes of recovering this aircraft from New Guinea and restoring it.  When complete, MAAM expects to have the world's only airworthy P-61.  I am looking forward to the day when this rare aircraft is fully assembled. 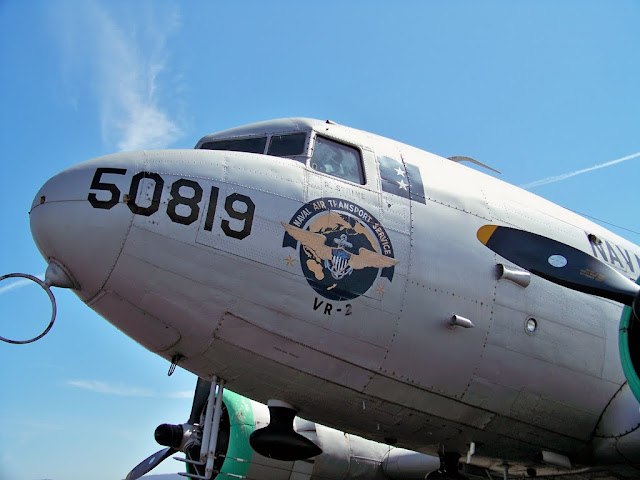 Several other aircraft also occupied the ramp outside of MAAM's hangar.  Though the hangar-bound aircraft were immaculate, the ramp aircraft showed signs of abuse by the weather.  This Dakota (a Naval version of the DC-3 / C-47) was a noteworthy exception. 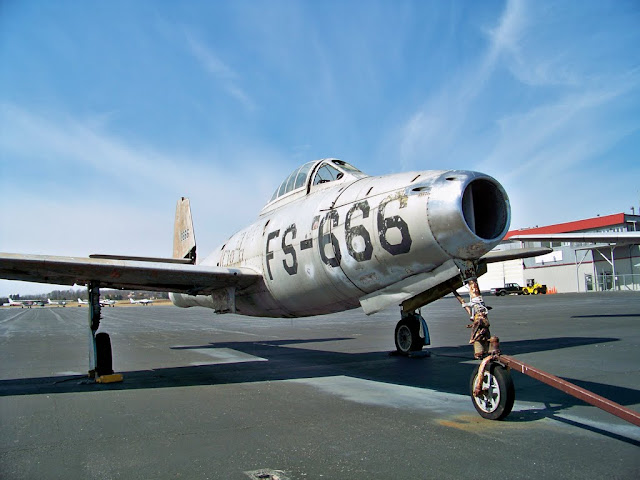 This tired warrior, an F-84 Thunderjet, still looked fast - though more than a little worse for wear. 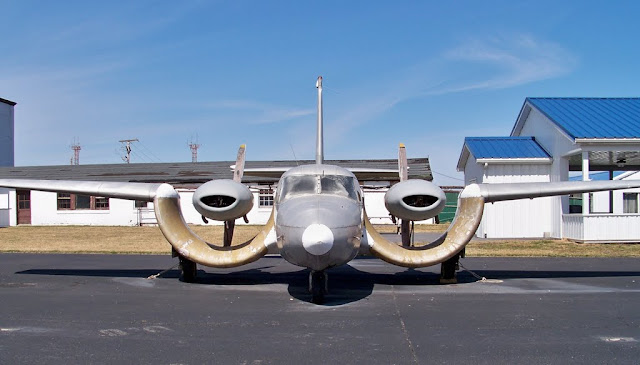 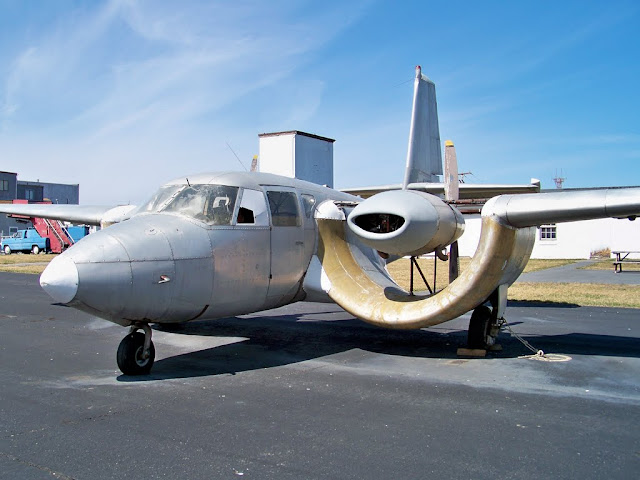 In my opinion, the most interesting aircraft on the ramp was this pre-production prototype of a Custer Channelwing.  Custer realized that it was airflow over the wing, not the wing's speed through the air, that created lift.  So he designed this pusher aircraft to draw air over the airfoil to create an aircraft with a very short take-off run.  Although modern accounts generally indicate that the Channelwing was a successful proof of concept vehicle, Custer was dismissed as a crackpot by his contemporaries and his airplane faded into obscurity.  Perhaps the design was simply too odd looking for people to accept.

After a very enjoyable visit to the museum, we climbed back into the Warrior and taxied across the airport for lunch at "Malibooz", the restaurant in the airport terminal.  Seated in an atrium window directly behind the butt end of Warrior 481, we enjoyed some good food while watching aircraft come and go.  Between the museum and lunch, our visit to Reading was very worthwhile. 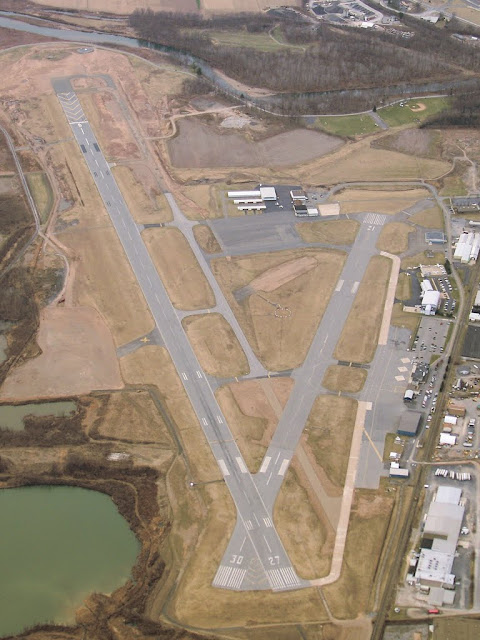 The route home took us directly across the Williamsport-Lycoming County airport, where Kristy and I once stopped for lunch.  Lycoming County, of course, is home to the manufacturer of Warrior 481's O-320 powerplant.  Further north, we stopped at Wellsboro-Johnston for fuel, chatted about warbirds with proprietor Wes, and offered scratches behind the ears for assistant airport managers Pratt and Whitney.

We returned to Le Roy, coming to Earth without nary a bump.  After two not-so-elegant landings at Reading and Wellsboro, I was glad to leave Dan with the impression that I really do know how to land an airplane.
Logged by Chris on Saturday, March 21, 2009 No comments: