A Funny Thing Happened on the Way to Flushing


In the fall of 2005, Kristy and I departed South Haven, MI in Warrior 481, bound for Dalton Airport (3DA) near Flint to visit with college friends.


As we departed the South Haven area, Dave provided ad hoc escort in the Decathlon.  Eventually, he pulled out of formation and returned home. We watched until the Decathlon became a tiny dot on the western horizon, then contacted Grand Rapids for flight following to Dalton.

At this point, my wife was no longer a flying newbie. That summer, we had flown from South Haven to Florida and back in Warrior 481. She understood most of what Air Traffic Control was talking about, could read a sectional as well as anyone, and routinely tuned radios and entered transponder codes while en route. As a right-seater, she had become a seasoned pro.

Both of us were also quite familiar with a phenomenon I call the “water bottle barometer”: 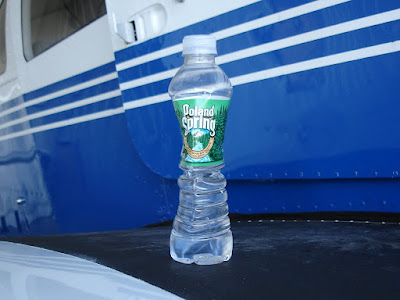 This is the direct result of quenching one’s thirst at altitude and capping the bottle tightly before descent.

At 5500 feet, Grand Rapids Approach handed us off to Lansing and Kristy began to rummage in her purse.

“What are you looking for?” I asked.

“My hands are dry,” she responded.

This triggered a vague sense of unease in the back of my mind, but nothing sufficiently specific crystallized there to elicit an objection.

The moment Kristy opened that tube of hand lotion, a significant fraction of the contents spontaneously burst forth. Once the Universe was satisfied by restoration of pressure equilibrium, the flow of erupting lotion ceased.  We looked at each other in surprise, then simultaneously realized that we had just witnessed the converse of the "water bottle barometer" scenario.

Hilarity ensued and a lesson was learned! It could have been worse. Our experience could have come from Coca-Cola instead, a well documented and far stickier hazard for airplane owners than a lotion-covered wife.

There is a well known mnemonic to help pilots remember that their altimeters will read inaccurately high when flying from an area of high pressure to low: “high to low, look out below” (i.e., you’re not as high as you think you are, don’t hit anything).

In the same spirit, I offer this: “a mile over the ocean, be careful with lotion”.
Logged by Chris on Saturday, February 18, 2012 2 comments: