On May 22, 2009, my mission was a simple one: take Warrior 481 aloft for a journey through space and time.  My destination was the Golden Age Air Museum located on a grass strip (Grimes Airfield, 8N1) at the base of a ridge in Bethel, PA. 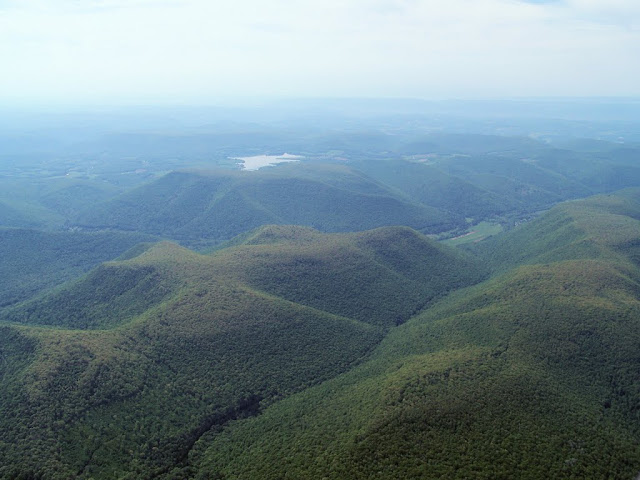 At 9:45 am, I crossed from New York into northern Pennsylvania.  Typical northern Pennsylvania terrain lay spread out below with some morning mist still lingering in the air.  Not many places to land in the event of an emergency, but I had my eye on that little field about halfway up and to the right of frame.  Such pockets are few and far between in this part of the world. 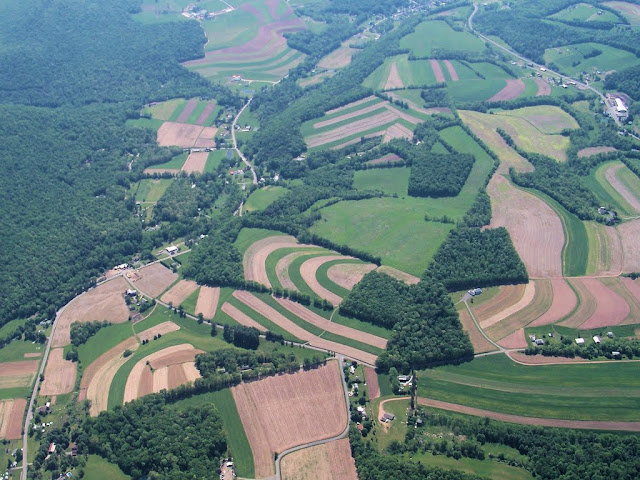 Pennsylvania farmers sure are fond of contour farming. 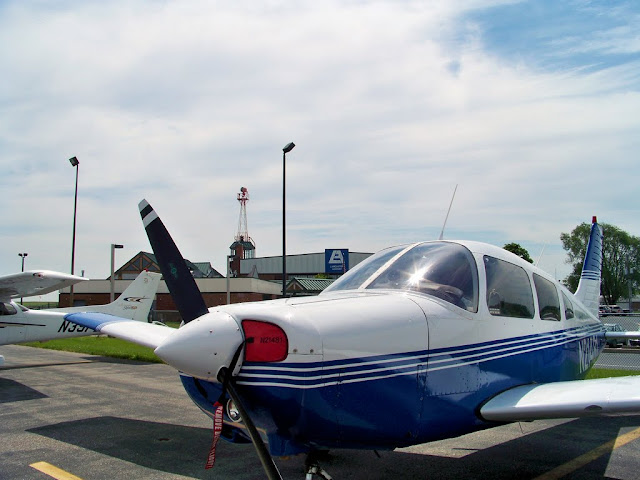 Rather than fly directly to my destination at Grimes Airfield, I continued further south to land at Lancaster (LNS) for lunch.  Lancaster is an active towered airport with crossing runways of significant length.  The field was reasonably busy when I arrived and I participated in my first land and hold short operation (LAHSO).  With 5000+ feet of runway prior to the hold short point, I touched down about 4000 feet shy of the intersection with traffic landing on the other runway.
From outside, the terminal building is reminiscent of a massive wilderness lodge and is home to Fiorentino's Italian Bar and Grill.  The grilled chicken pesto panini sandwich really hit the spot.  From my booth, I watched multiple aircraft come and go and a helicopter that hovered over the field for nearly an hour (a training exercise, I assume).  The only thing that made me raise an eyebrow was a fellow in a Cirrus SR-22 turning lazy donuts on the ramp near my airplane for at least 20 minutes.  Otherwise, Lancaster was a terrific place to stop for lunch. 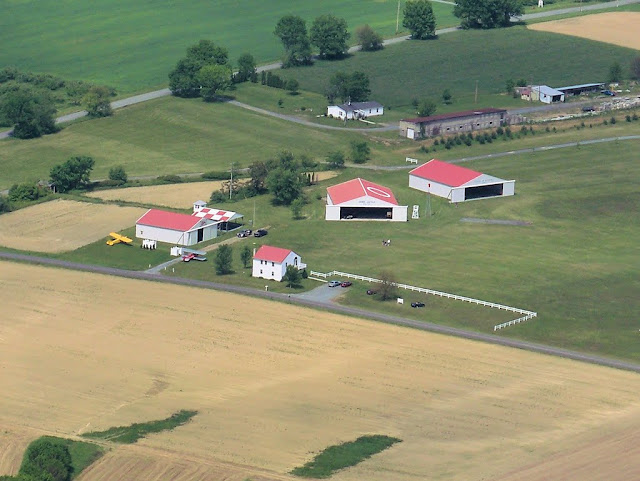 Just a few minutes north of bustling Lancaster is Grimes Airfield in Bethel, PA.  Being nothing more than a 2700 foot turf runway, it is the exact opposite of the large, paved, tower-controlled field I just visited.  No muss, no fuss.   The Golden Age Air Museum, pictured above, occupies the western end of the field.  As I entered the pattern, I was delighted to see a red biplane lurking over a nearby ridge. 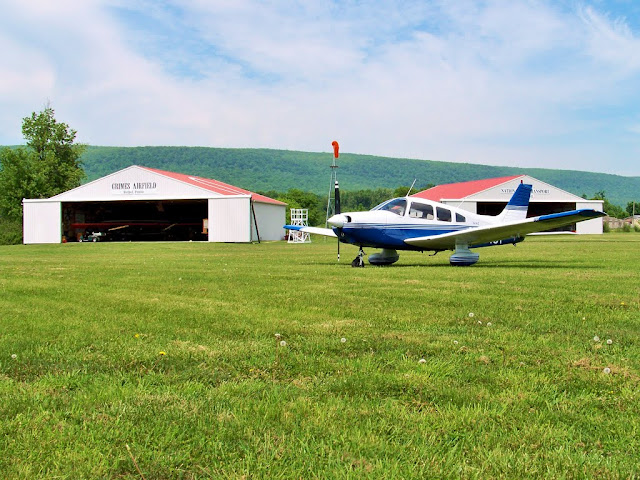 Landing on the grass, the Warrior's undercarriage made the familiar low frequency rumble characteristic of rolling on turf.  Once parked, I was surrounded by flying examples of 1920's and 1930's aircraft.  Grimes Field exists as a little bubble of the past thriving amongst the hills of Pennsylvania.  My Warrior and I were warmly greeted, but nevertheless stood out as modern era anachronisms amongst aircraft fashioned from wood, steel tube, and rag. 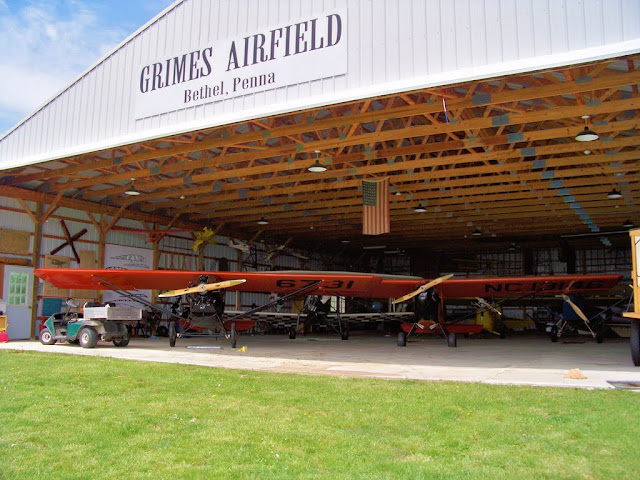 One of three hangars chock-full of biplanes and other vintage aircraft.  I paid my $5 admission (worth every penny) to the museum's founder who spent over an hour walking me through the wonderful collection. 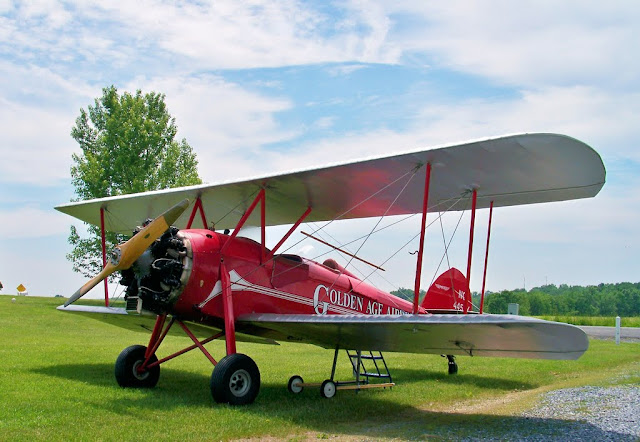 This is the biplane I saw loitering near the airport when I entered the pattern.  A 1929 WACO GXE, this time machine is the one most often used by the museum to give visitors a taste of golden age aviation. 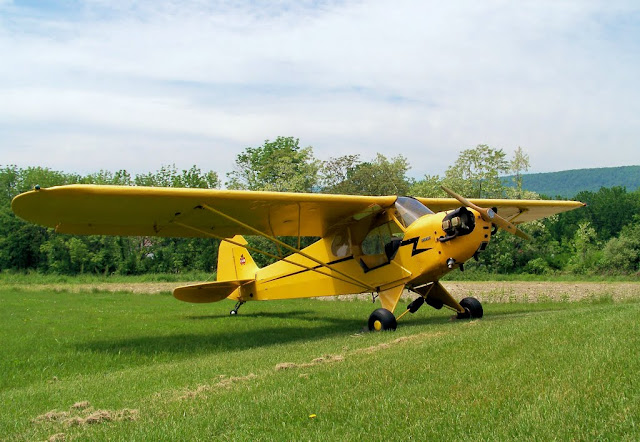 This Piper J3 Cub was parked out of the way beside one of the museum buildings, truly at home on the grass. 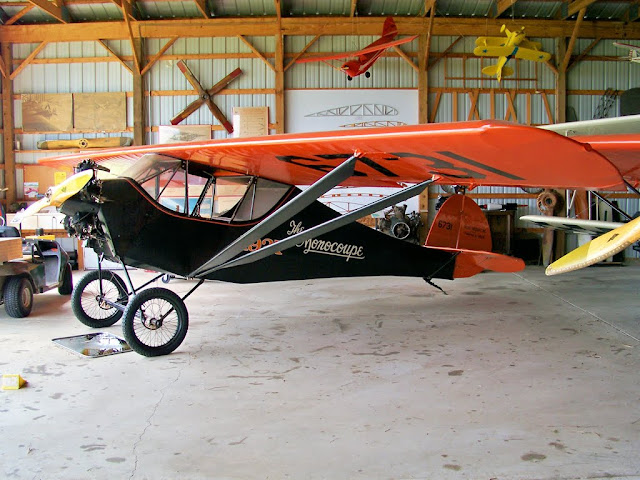 This aircraft is a rare, airworthy 1928 Monocoupe 70.  Flying behind a 65 hp Viele M5 radial, it is an early design by Don Luscombe.  As I looked at it, I was struck by how much it resembled many of the modern light sport aircraft currently in production. The cabin is essentially a pod with a narrow empennage extending aft. 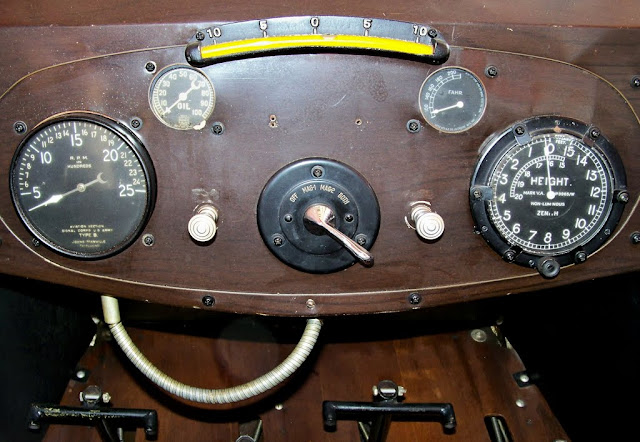 1928 Monocoupe avionics were spartan, but functional.  Leaning into the cockpit to take this picture, the aroma of vintage machinery trigged a fond reminiscence of my grandfather's old Farmall tractor.  Several of the vintage aircraft had "height" gauges rather than altimeters.  This struck me as charming. 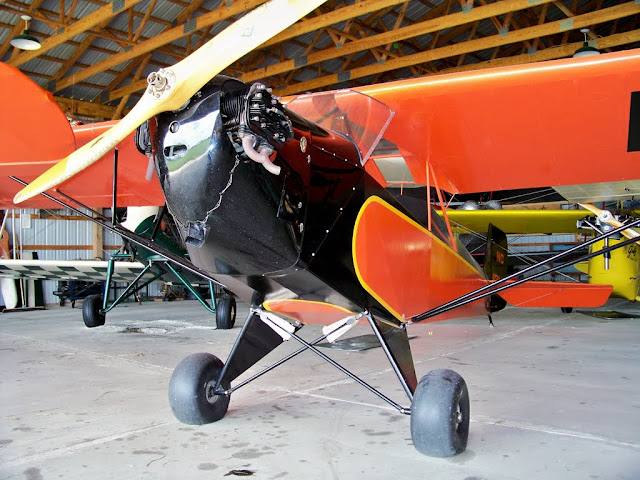 This is an airworthy 1932 Taylor E-2 Cub, built in Bradford, PA.  It was the first in a line of aircraft to carry the Cub name.  Unlike later Cub versions, the E-2 was truly an open-cockpit aircraft.  This one is (barely) powered by a 37 horsepower Continental built in Detroit, MI.  In some respects, this aircraft can be considered my Warrior's great-great-grandsire.  The E-2 evolved into the J-series Cubs built by the Piper Aircraft Company in Lock Haven, PA.  Piper went on to construct all metal aircraft like the low wing Comanche and, eventually, the simplified Cherokee line of aircraft. 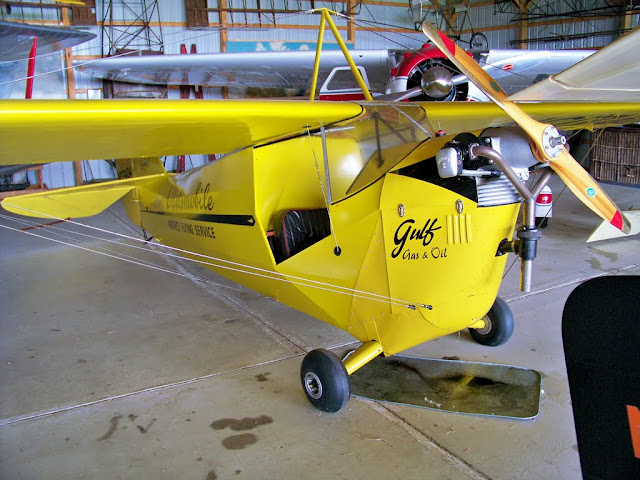 This tubby little craft is a 1936 Aeronca C3 Master powered by a two-cylinder (yes, two cylinder!), 40 horsepower Aeronca powerplant.  As the drip pan underneath suggests, it's airworthy. 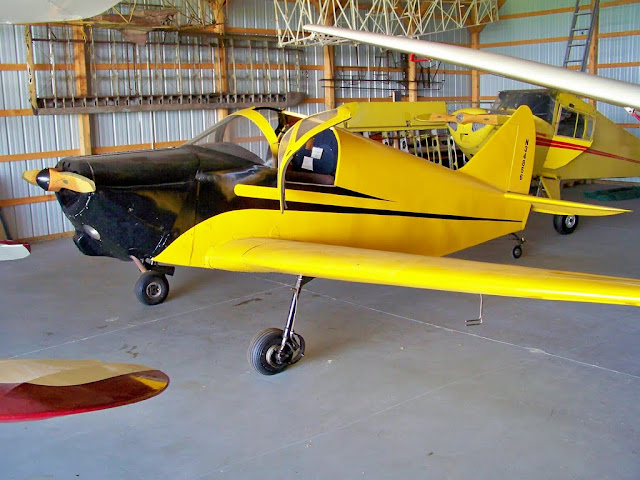 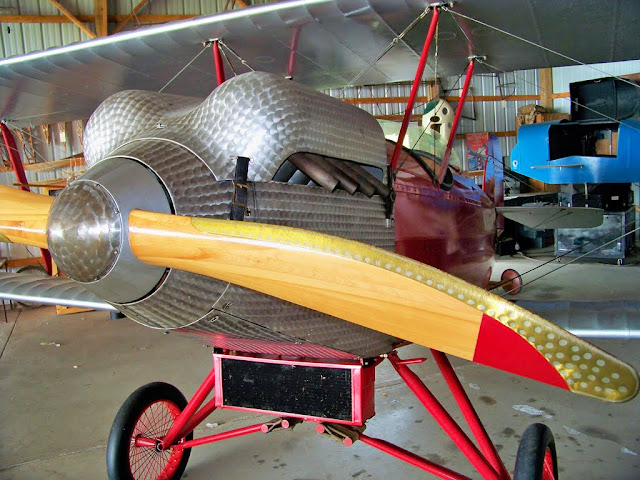 This is a one-of-a-kind 1926 Winstead Special.  Like many aircraft in the Golden Age Air Museum's collection, this biplane was lovingly restored to airworthy condition by museum volunteers.  It evidently has quite a history as a barnstormer. 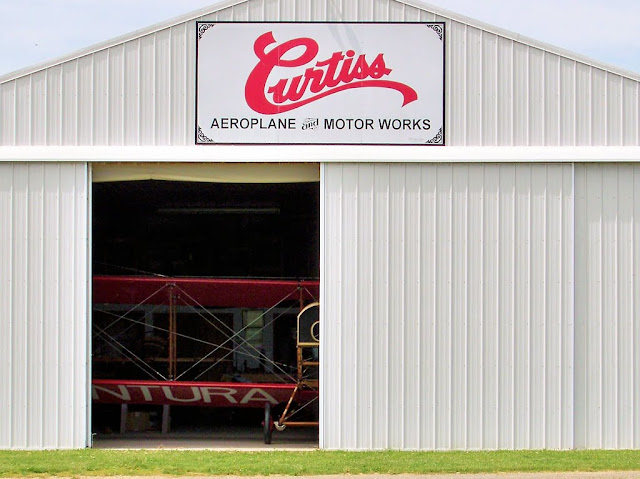 My tour of the Golden Age Air Museum concluded with the restoration shop.  Most of the space was dominated by a partially-completed 1918 Curtiss JN4D Jenny. 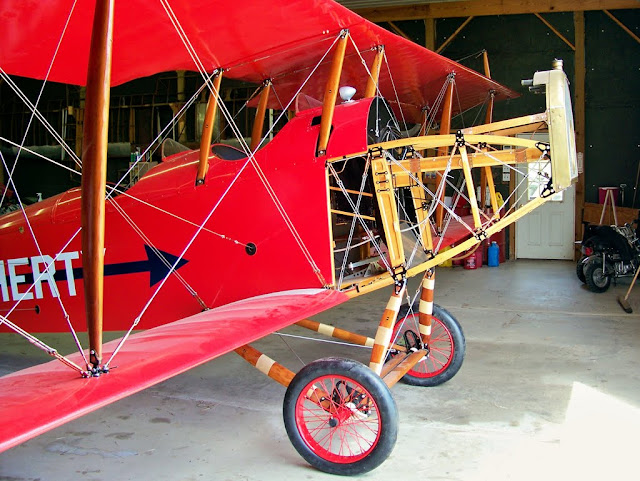 Never having seen a Jenny up close, two things struck me immediately.  First, at nearly ten feet tall with a 43 foot wingspan, this is a massive aircraft.  Second were the plethora of gossamer support and control wires extending between, above, and around elements of the superstructure in true "contraption" fashion. 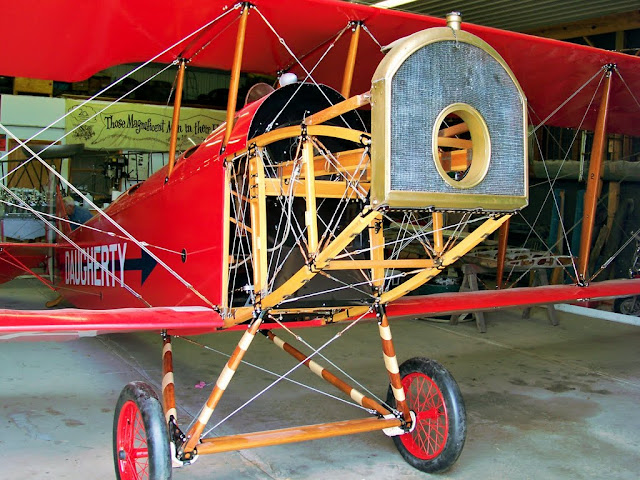 An empty engine compartment awaits the OX-5 engine under restoration in the back of the shop.  As I examined the Jenny, the word "craftsmanship" came prominently to mind.  The Jenny is a handmade work of art with an elegantly carved wooden frame, copper cladding under fasteners to protect the wood, and bands of twine wrapped carefully around the landing gear to maintain them in a useable condition after a hard landing. 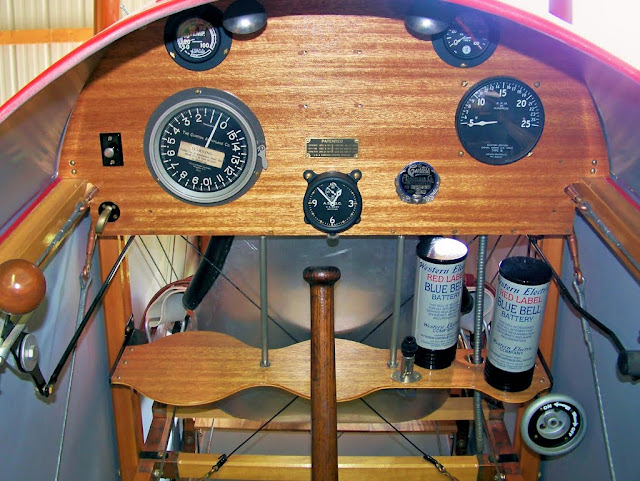 Even the cockpit is well crafted, if rather simple.  When I saw the control stick, I asked my tour guide if it was made from a baseball bat.  He chuckled and replied that this one was original, but that they had made the stick in the front cockpit from a similarly shaped baseball bat.

After three hours at Grimes Airfield, it was time to depart for home.  The Golden Age Air Museum is a truly wonderful place and is highly recommend for anyone who has a love of old airplanes.  I launched from the grass runway, my first grass take-off since leaving South Haven, MI in 2005.  I circled the airfield once to gain altitude before crossing the ridge to the north.

Once clear of the ridge, my radio crackled with a modern Unicom announcement and I realized that my journey back in time had ended.  I stopped for fuel a few miles north at the Schuylkill County Airport (evidently pronounced "school kill") perched atop a ridge in Pottsville, PA.  As I was fueling, I chatted with the airport manager who was simultaneously arguing with someone on the phone about a problem with self-serve fuel.

"No, the 100 low lead is working fine.  There's a guy here using it right now.  Yes!  I'm telling you, it's working fine.  Hey, how are you?  Where are you from?  Rochester?!  Wow!  No, seriously, it's working just fine for 100 low lead.  Yeah, I think he used a credit card.  Did you use a credit card?  Yeah, he used a credit card.  No, I don't think that's the problem.  I think the Jet A is the only thing affected.  What brings you this way?  Grimes Airfield?  Great place!  Good choice!  I'm looking at the back of the pump, all the lights are in the green.  Ok, he's done pumping, let me swipe my card.  Yeah, see, all the lights are green back here.  Hey, thanks again for stopping, come by and see us again!"

With a wave and a smile, I bowed out of the schizophrenic conversation. 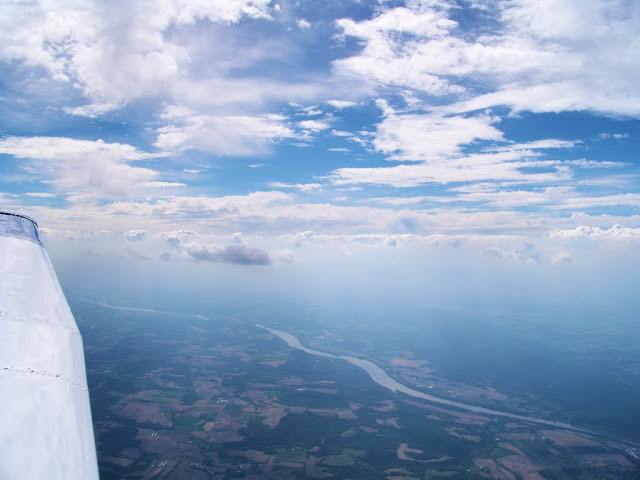 On the way home, I climbed to 10,500 feet in search of smooth air and improved cloud clearance.  Amongst clouds nearly two miles above the Earth's surface, the radio was silent and no other aircraft were in sight.  I was struck by a powerful sense of solitude. 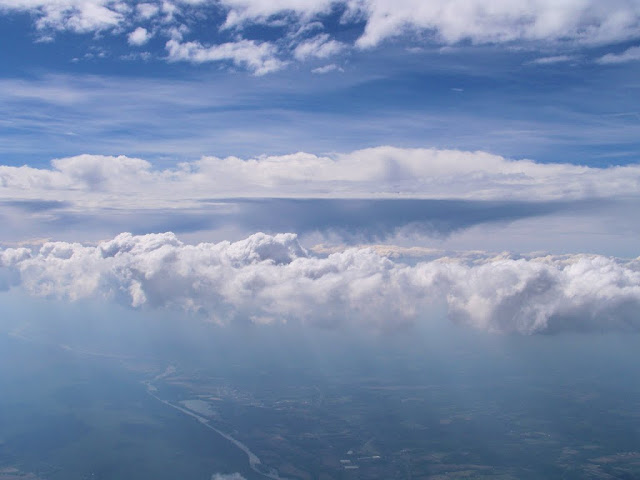 A cold front lingered just south of the New York - Pennsylvania border.  This is what it looked like.  In case there is any doubt that these clouds resulted from the front, the outside air temperature abruptly dropped from 12°C (54°F) to 8°C (45°C) as I passed them.  I think the darker part of the formation may have been virga, but I did not pass close enough to verify.

A very satisfying day of flying ended with my wielding a spray bottle of water and a cotton cloth, contentedly washing grass stains from my propeller tips and removing green bits of Grimes Airfield from the underside of my port wing.  Yes, it has been a few years since I've flown off of grass. Too many.
Logged by Chris on Friday, May 22, 2009 No comments:


Flying in the evening is one of my favorite things in the world.  The air goes calm and the sun highlights every subtle terrain detail.  These ripples are a perfect example of the sort of details that emerge near dusk. 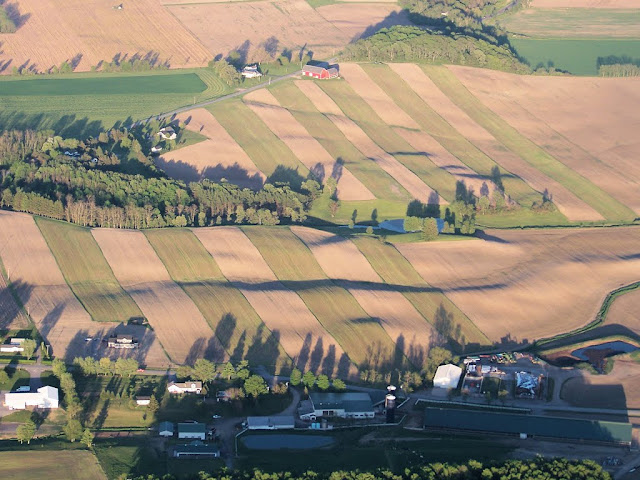