The Piper in Winter


First flight of the new year.

The region was still recovering from the ravages of single digit temperatures and over a foot of snow. Kudos to the team that plowed around the hangars; I was left with very little that needed shoveling.

Personally, I was recovering from the ravages of an illness. After several days housebound, I was finally ready to venture out...and aloft.

My objectives were no grander than getting back into the air and circulating hot oil through the engine. Taxiing was performed with care as the Warrior's thirty-five foot wingspan was frequently threatened by high snowbanks. As I gingerly made my way to the departure end of the runway, I envied the owners of stubbier-winged earlier Cherokees.

Every winter, I am delighted by the stark, crisp, monochromatic austerity winter brings to the landscape. I took many pictures on this flight. Soon enough, I will be longing for the return of green to the world. 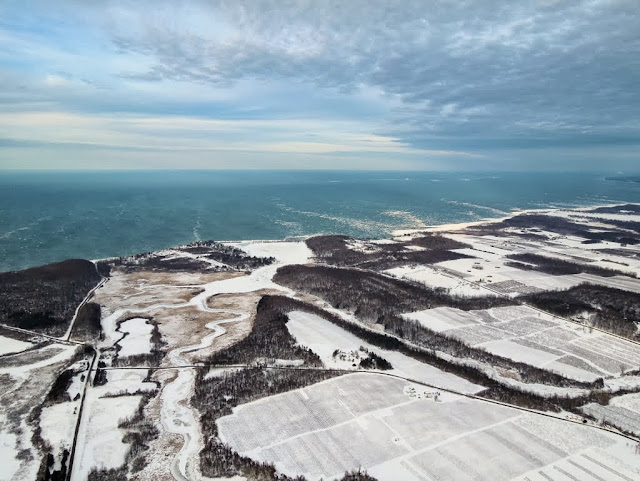 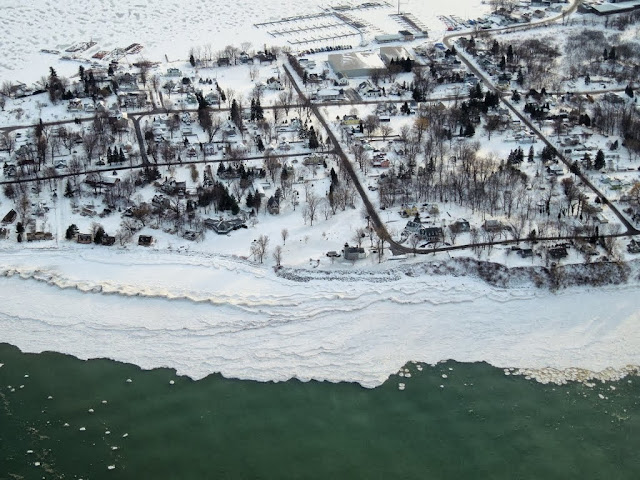 In places, a substantial shelf of ice extended a false shoreline into Lake Ontario. 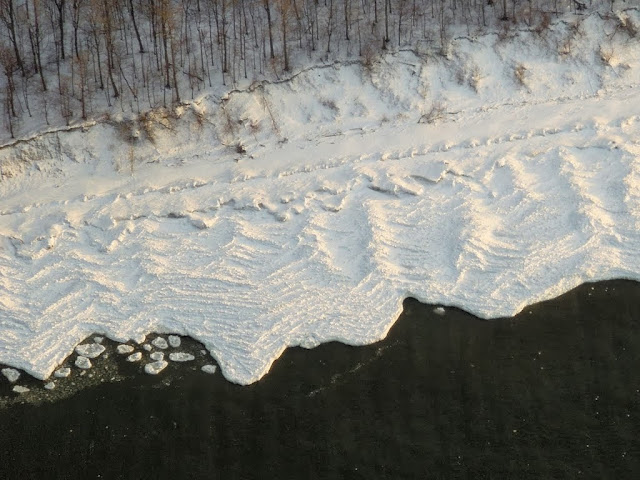 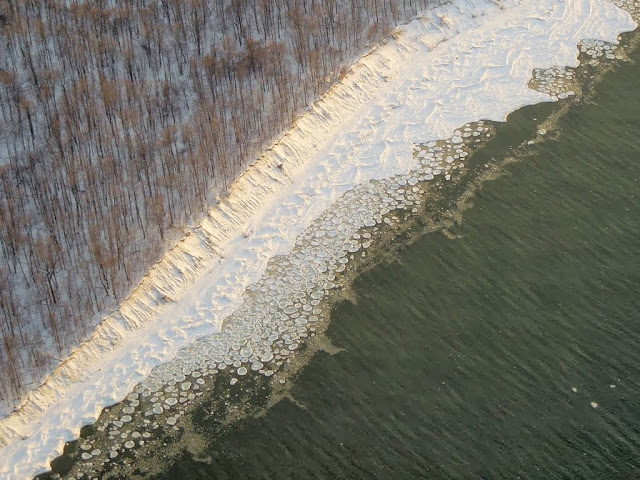 After a day of sunshine with temperatures well above freezing, the ice was breaking up in many places. 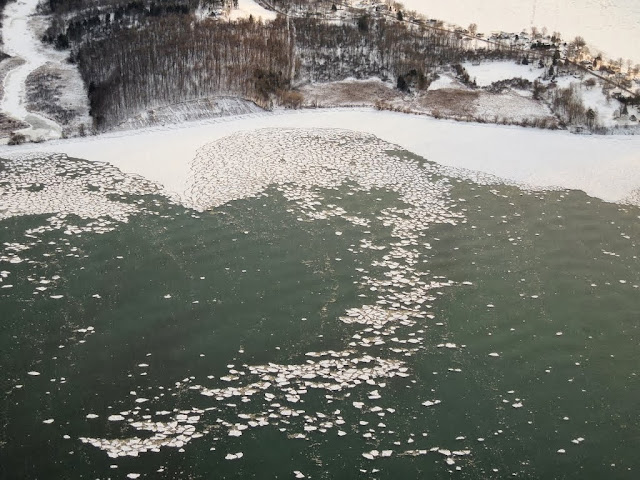 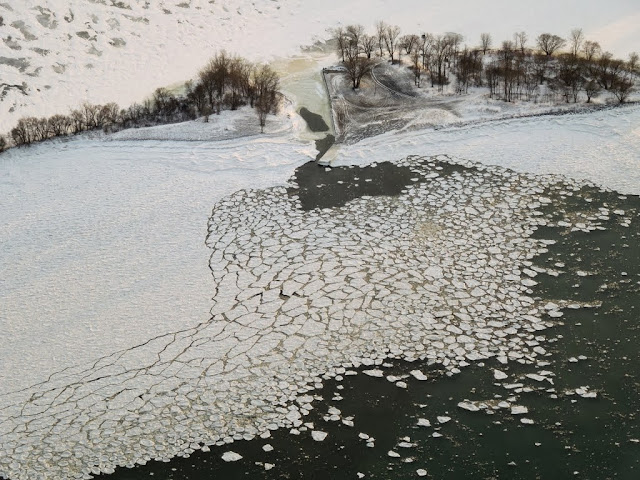 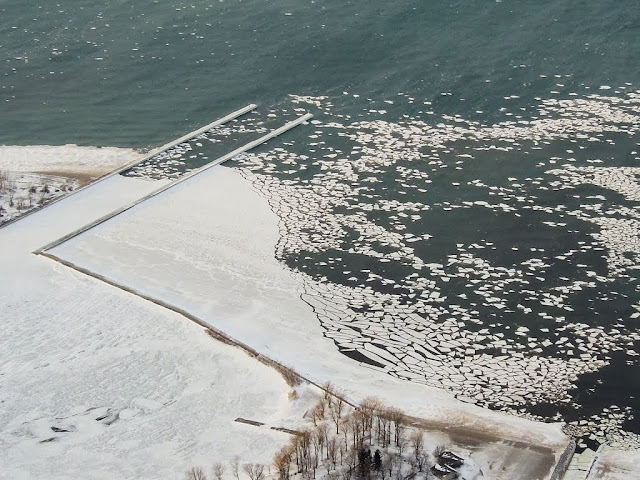 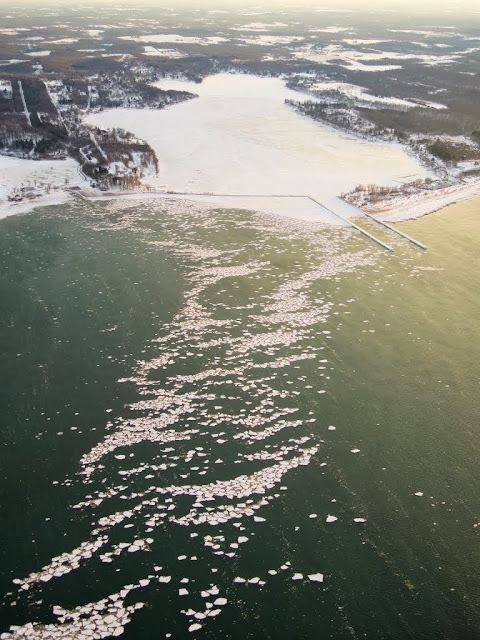 Ice floes migrating into open water from the ice sheet at the outlet of Little Sodus Bay. 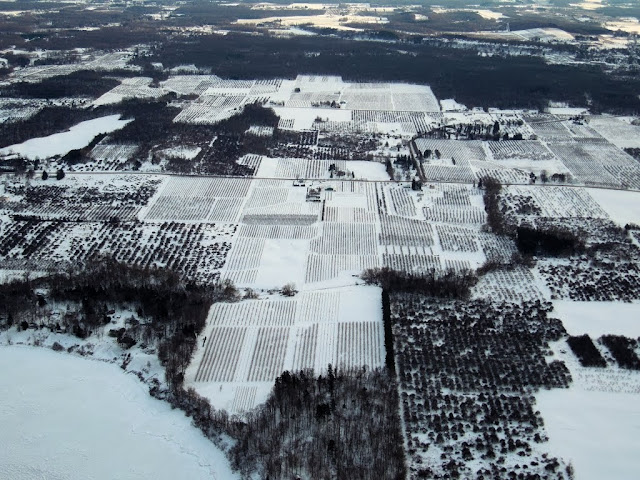 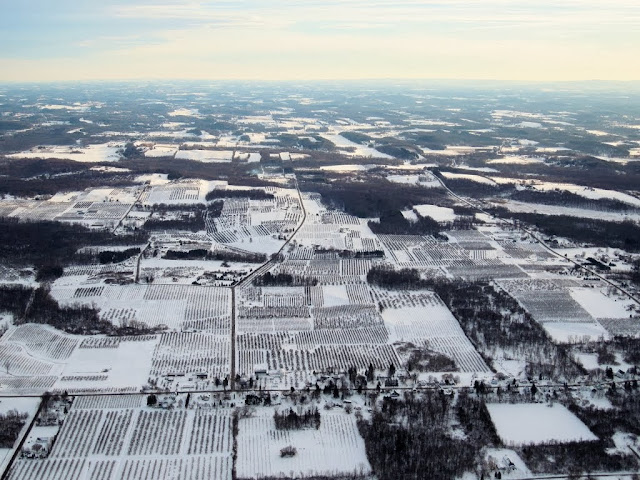 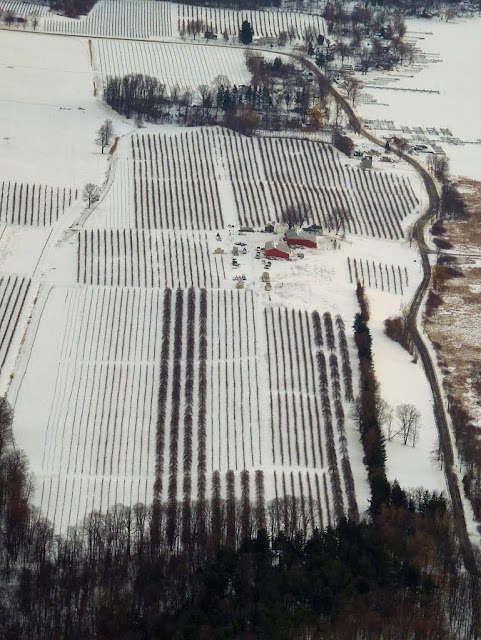 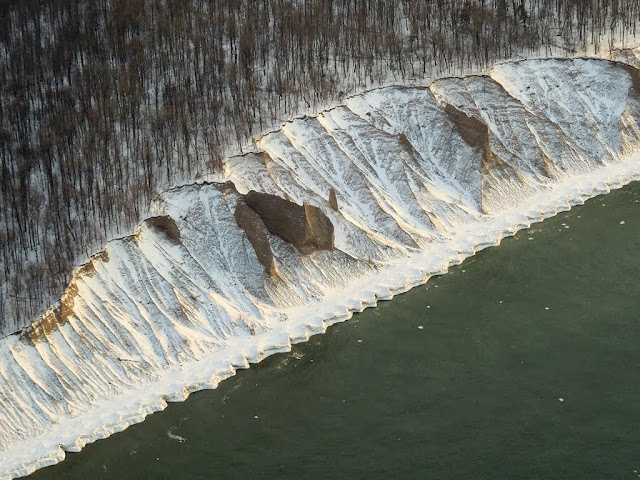 An example of the characteristic bluffs along Lake Ontario. 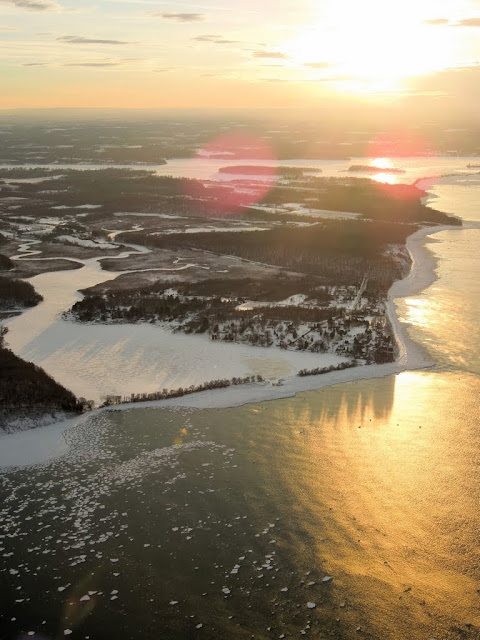 Check out that lens flare - just call me J.J. Abrams! Clearly, I need to clean the lens on my camera. 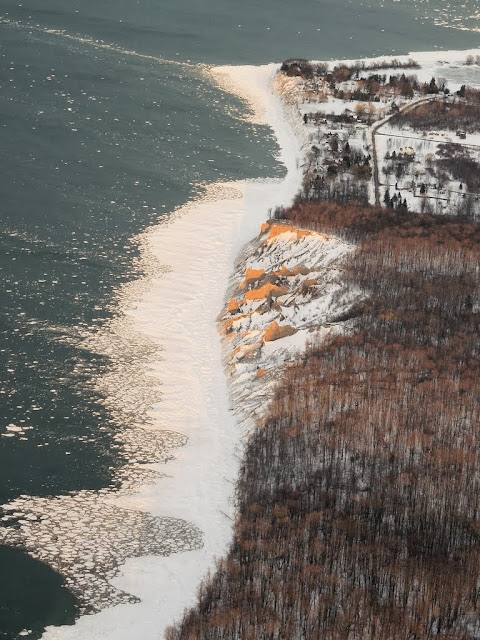 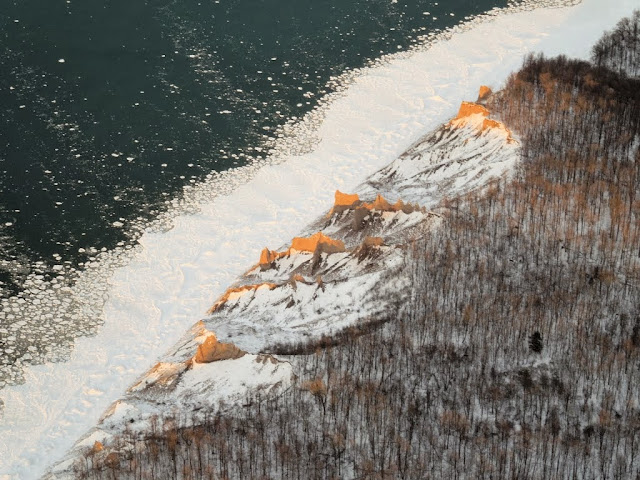 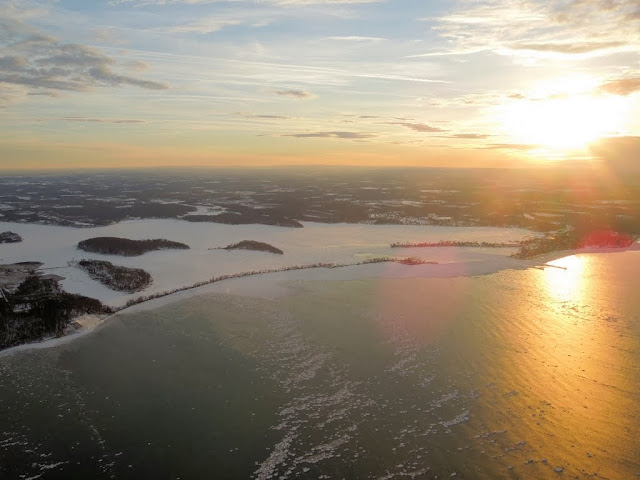 Sodus Bay was entirely frozen over. 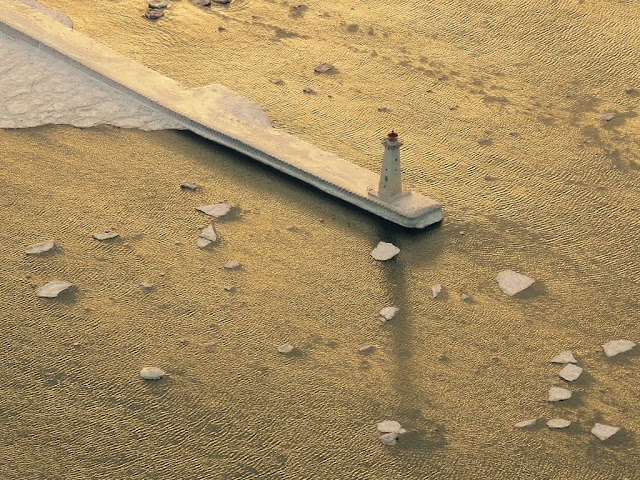 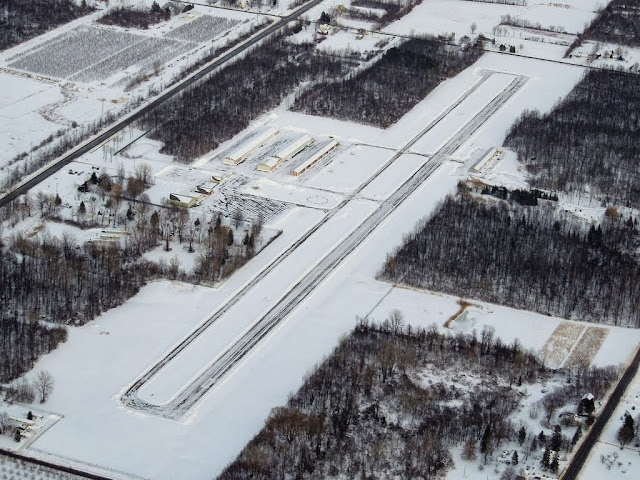 The Williamson Sodus Airport in winter operations mode. Residual snow on the runway made my landing seem better than it actually was. I have no idea when the airplane transitioned from flying to rolling because I never felt contact with the ground. 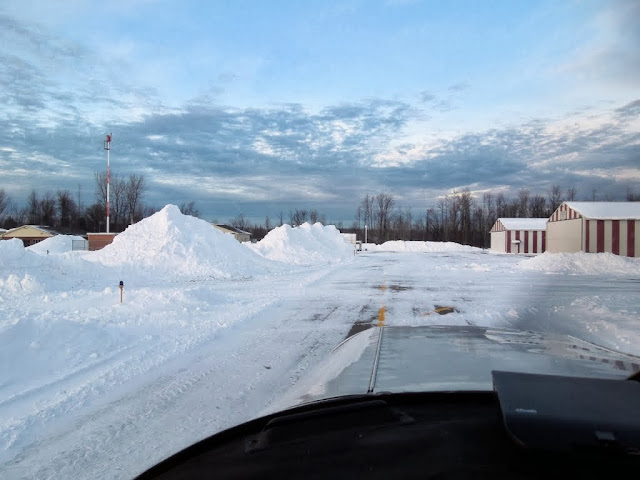 I was greeted by this view when I turned off the runway. Some of those snow piles were absolutely huge. 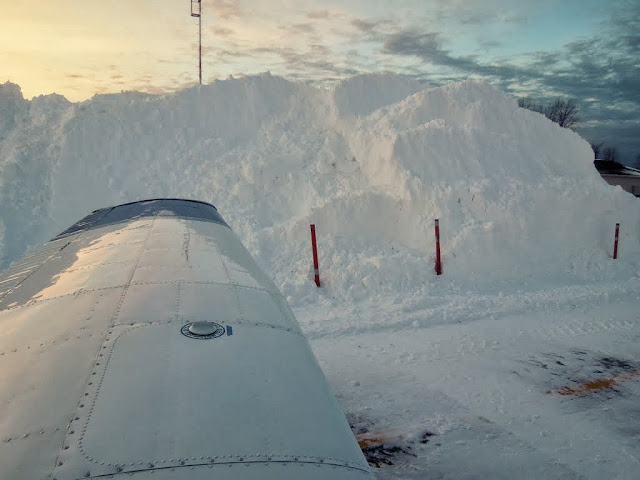 Above, a case in point. After another careful taxi, I put the Warrior back to bed. Thank goodness for Yaktrax (and to Ray for recommending them in the first place).

Perhaps I was not so well recovered from my illness as I thought. One of my ears required the better part of an hour to clear after landing. Still, after a few days of doing little more than sleeping, flying made me feel alive again and the view was spectacular.