(Or "How Social Media Actually Proved Itself Useful")

"Hey, Chris!
I noticed you're on our Hangar Waiting List.
I think we have an enclosed hangar coming available..."

It was from Joe at the Williamson-Sodus Airport.

When I moved to Upstate NY in 2006, my airplane and I found sanctuary from the elements in a beautiful, brand new T-hangar built by Ray at the Le Roy airport southwest of Rochester.  For a multitude of reasons, Kristy and I bought a house on the diagonally-opposed quadrant of the city, leading to a 45 minute one-way commute through downtown Rochester to reach the airport.

The closest airport to my house is Williamson-Sodus (KSDC), a nice, club-owned facility.  On my first visit in 2006, I met Joe, who placed me on the hangar list.  It was made clear to me that club members would always be given preference on the list.  I assessed the likelihood of advancing to the top to be slim.

This occurred seven years ago.  As the years passed, I came to regard Ray as my personal patron saint of aviation and his immaculately maintained airport as home.

Joe's message obviously set me to thinking.  Economics of time and money unambiguously show that a move to Williamson is the smart thing to do. A drive to Williamson from home is only half the distance that I drive to reach Le Roy.  Less time driving means more time at the airport or with my family.

Unfortunately, I have a sentimental streak a mile wide that always complicates these types of decisions.  I logged 765 hours out of the Le Roy airport, each successful journey beginning and ending at the safe harbor of its runways.  During that time, Ray was always there to help.  I remember how Ray plowed away the late November snows from the runway specifically for my first arrival there in 2005.  Ray stood vigil at the airport until my safe return the night I foolishly ran low on fuel and after the engine fire on the other side of New York state.  There was also the time poor weather forced a diversion to Canandaigua when Ray and Darrell mounted a rescue mission for the Warrior without me even asking for help.

After some thought, sentiment won out and I responded with a "thanks, but no thanks".  I could not imagine willfully leaving my home.

"We're putting internet into our hangars..."

Internet availability was not really a tipping point, but it inspired me to take a look at the numbers again. I estimated that I would save close to $300 in auto fuel and 36 hours in the car each year if I made the move. Numbers like that are enough to give a guy pause, even a really sentimental one. The hangar and club membership at Williamson would cost slightly more than rent in Le Roy, but this would be offset by the aforementioned savings and an avgas discount.

The morning of the Williamson Apple Blossom Festival pancake breakfast, Kent, The Bear, and I explored the available hangar.  It was an enclosed T-hangar with an electrically-operated bifold door.  The structure seemed tight.  While not as nice as my current hangar in Le Roy (in particular, an asphalt floor instead of concrete that made for a dark interior), it was perfectly serviceable.

Other advantages of moving to Williamson include: a maintenance facility on the field run by "Helicopter Ray" whom I like and respect, an AWOS (automated weather observation system), LPV approaches serving both runways (possessing vertical guidance and lower minimums than the GPS approaches at Le Roy), and a larger / more active pilot community with regular Saturday afternoon cook-outs reminiscent of my days in South Haven, MI.

Even Darrell thought I would be crazy not to make the move.

So I decided to move (it's all Darrell's fault).

The phone call to Ray was difficult, especially when the news was clearly disappointing to him ("it's not you, it's me").  At the end of the day, our friendship remained intact, but we will need to be more proactive about getting together.  I was particularly pleased when Ray offered to maintain my security code at Le Roy so that I will have access to the airport office; in that way, Le Roy will always be a home to me.

Kristy, The Bear, and I drove to Le Roy to pack up the hangar, meeting my mother who was on her way into town for a visit.  It was a sweltering 93°F, a counterpoint to the icy November afternoon in 2005 when I first arrived at the airport.

Once the cars were loaded, Kristy and my mother set off as a mini convoy of Subarus on a seventy-five minute road trip to Williamson.  The Bear and I, by contrast, loitered at the airport prior to our twenty minute flight.

Ray and Darrell came to see us off, waving to us from the open door of Darrell's hangar as I waggled the wings at them while climbing out.  The Bear fell asleep at altitude for the relatively short hop through the heat and haze to Williamson.

I always referred to the area immediately around Le Roy as my aeronautical backyard.  My new backyard near Williamson is quite different - just off of Lake Ontario with favorite sightseeing destinations Sodus Bay and Chimney Bluffs nearby.  Different, but nice. 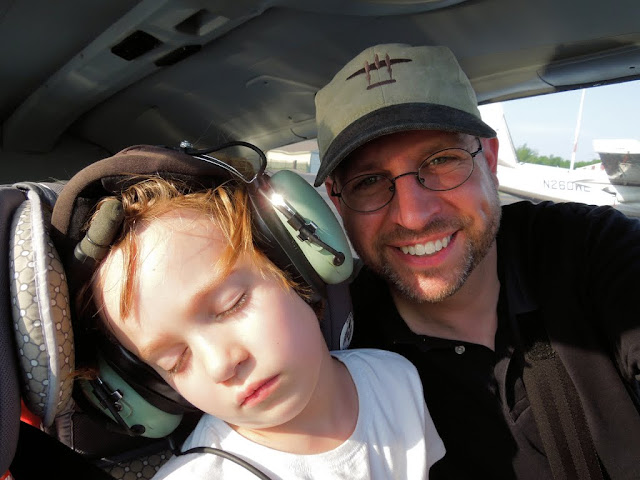 On the ramp, The Bear was still out cold.  In fact, much to my surprise, I was the only one stirring at the airport; the place was unexpectedly deserted.  Kristy and Mom would not arrive for another thirty minutes and Joe, president of the Williamson Flying Club, was significantly delayed.

I roused The Bear and we waited in the air conditioned club house.  Eventually, Joe arrived and we parked Warrior 481 in her new berth. 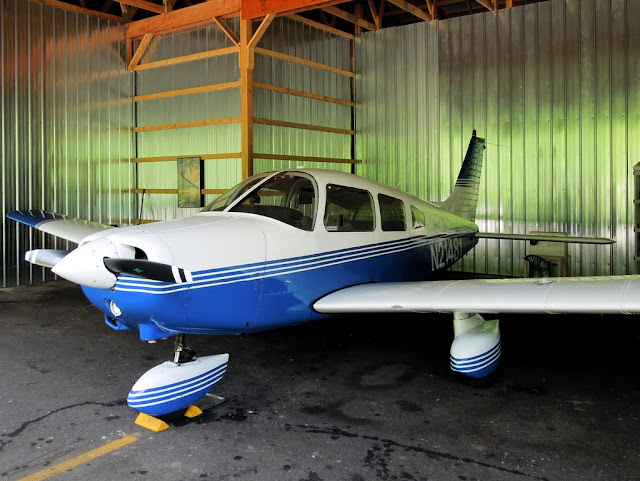 The shiny walls of the hangar bathed the interior in an emerald glow, reflecting foliage from the woods opposite the open door. 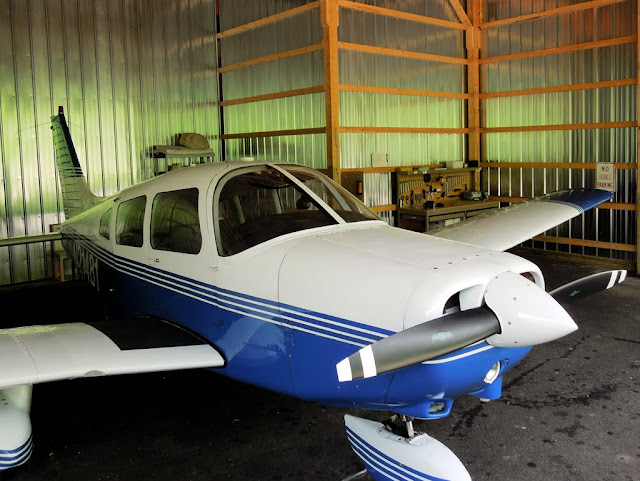 It was not until the next day (after only a 25 minute drive!) that I managed to put everything in its place.  Compared to the night before, the airport was abuzz (literally) with activity.  Several people stopped to welcome me to the airport.  I met one fellow in the clubhouse who, when I told him that I flew a Warrior, asked if it was the "pretty blue and white one" that had flown into the breakfast. 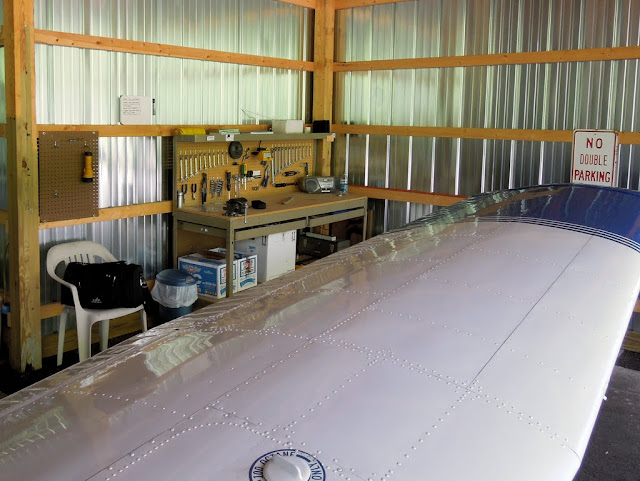 With my workbench reassembled and everything put away, I finally felt settled. 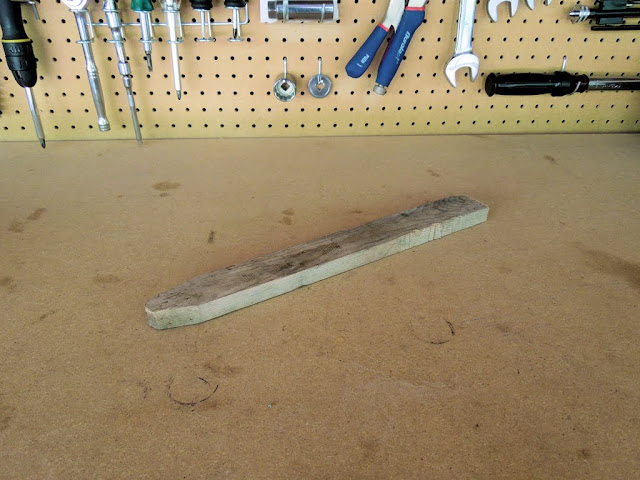 I met a former hangar occupant who retrieved some items that he left behind.  I also found this stake in the corner of the hangar and wondered if Buffy was a former occupant of my hangar - if so, Mr Pointy was looking a little dull.

As I powered down the door, I thought to myself that "home is where the airplane is".  But home is also where the heart is and that will probably remain in Le Roy until I feel more at home in my new digs.

Did I mention that the new commute is only 25 minutes?  In nine years, I have never had the airplane so close to home!
Logged by Chris on Friday, May 31, 2013

Email ThisBlogThis!Share to TwitterShare to FacebookShare to Pinterest
Labels: Article, The Bear, WFC