I work hard for my vacation time, so I decided that I needed to spend it in spectacular fashion: a frivolous fall color tour in the Adirondacks.  I chose a Tuesday with high pressure dominating eastern New York, verified through Ray that the mountains were bedecked in their finest fall colors, and cleared my schedule at work. 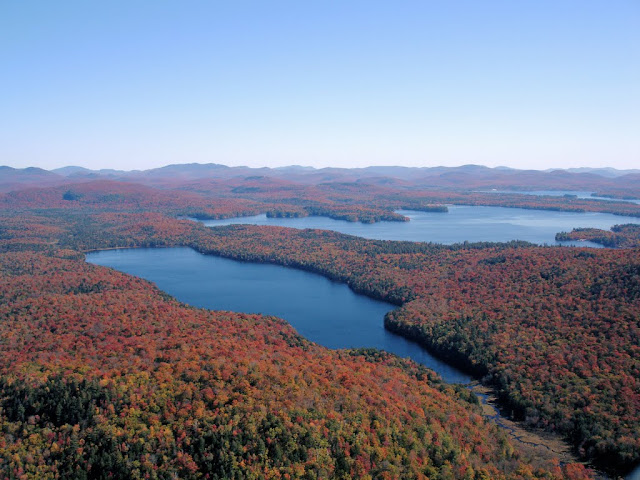 I arrived in the southern portion of the Adirondacks after 1.5 hours of flight time.  This region was clearly at peak color, as shown by the vegetation surrounding Sacandaga Lake (above). 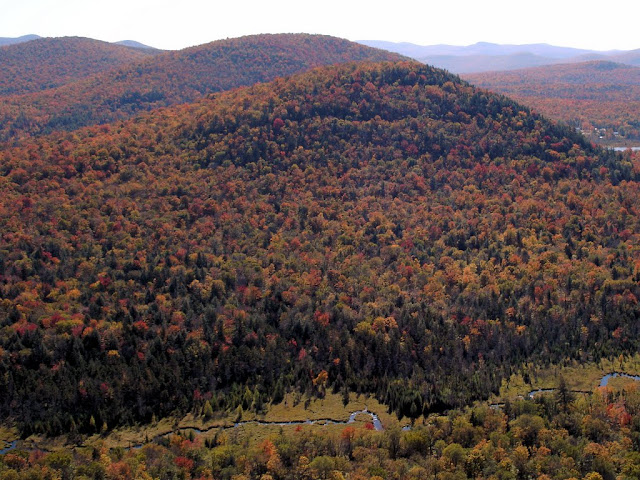 I entered the right-handed traffic pattern for runway 4 at the Piseco Airport, positioned on the north end of Piseco Lake. 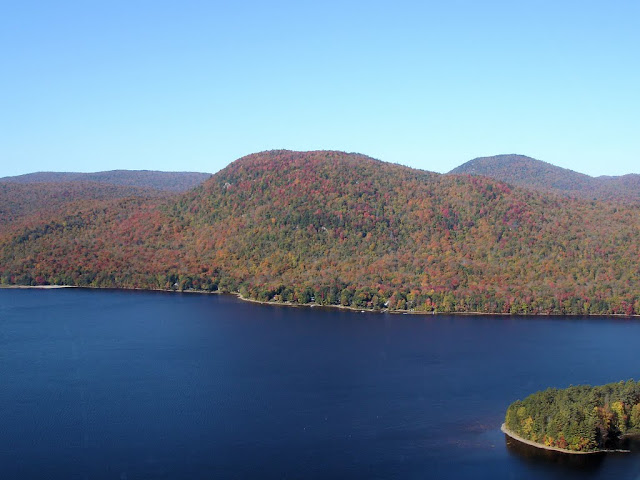 The non-standard traffic pattern for runway 4 at Piseco requires flying beyond the small island in the lower right corner of frame before turning back to the airport for final approach.  The approach is flown over the lake. 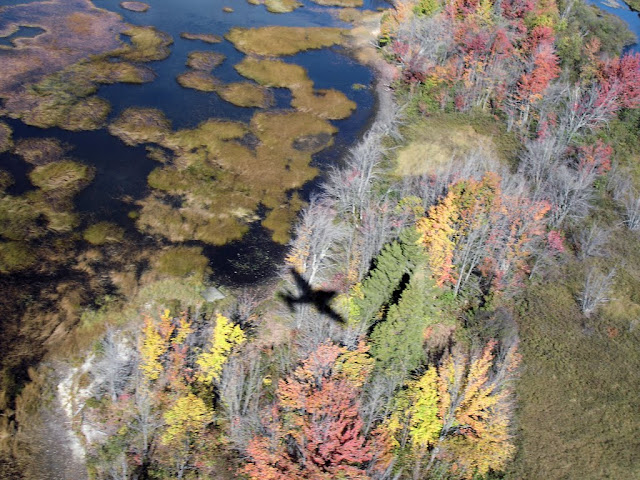 Crossing the shoreline of Piseco Lake on final for runway 4.  The runway parallels a nearby ridge that undoubtedly makes for a nasty crosswind on windy days.  Fortunately, the winds were light, which gave me a moment to snap this photo. 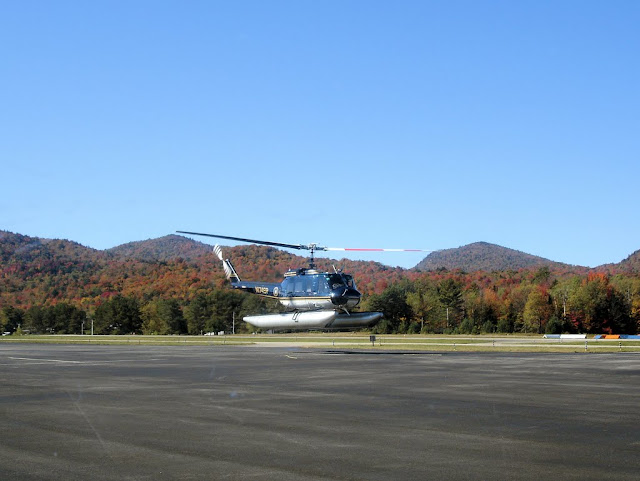 My arrival at Piseco was coincident with this New York State Police helicopter.  As I walked across the ramp, the pilot greeted me.  "Awful day, huh?" he chuckled.  Unlike me, however, he was working.  The helicopter was restocking fish in local lakes.  As we chatted, a truck arrived to supply the helicopter with more fish.  "Just out flying for the sake of flying?" he asked.  When I nodded, he looked a little envious.  At the same time, it seemed to me that he had one heck of a cool day job. 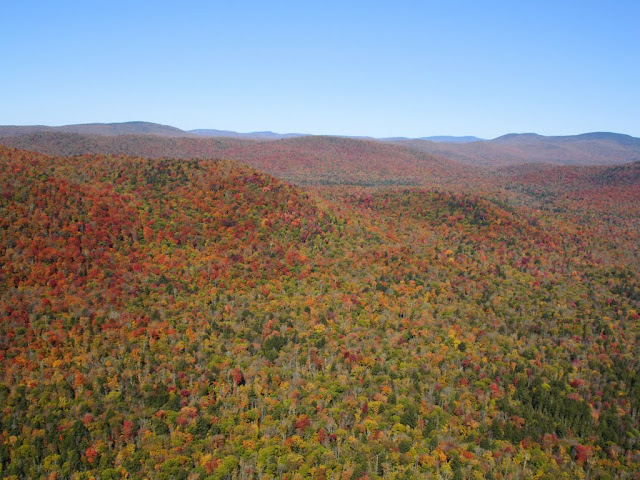 When I was growing up, my grandparents carpeted a significant portion of their house with yellow, red, and orange shag.  In retrospect, it was hideous stuff.  As I departed Piseco and proceeded further north into the mountains, I was struck by how much the landscape reminded me of that carpet.  Though the manmade stuff was truly awful, seeing the landscape blushing with that same color scheme was spectacular.  As stupid as it may sound, the wistful childhood memories conjured by these autumn colors made the mountains feel a little more familiar than they did before. 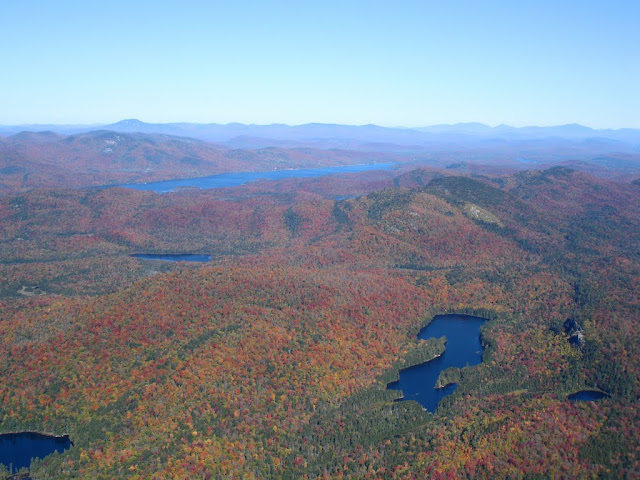 My first visit to the Adirondacks was January 2007.  I took several photographs of Indian Lake (above) on that trip, the brilliant blue water surrounded by a stark landscape completely drained of color.  The fall color rendered this scene fantastically, beautifully, different. 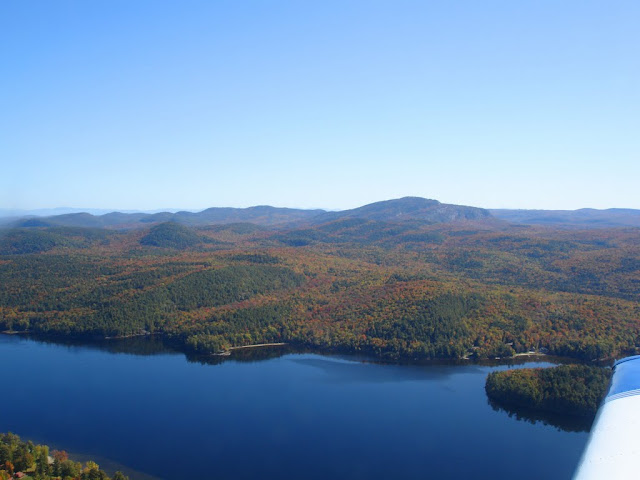 Flying along Schroon Lake on the way to another small airport tucked among the mountains. 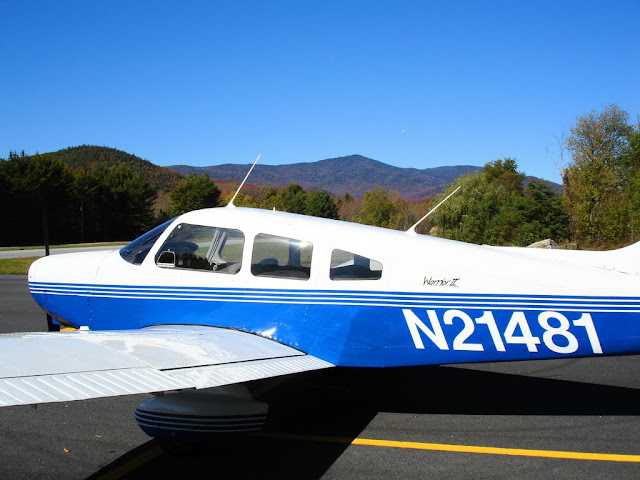 I landed at Schroon Lake Airport (#83, if anyone besides me is bothering to keep track).  At 800 feet elevation and 3000 feet long, this is hardly a "mountain strip".  However, the approach end of runway 34 is obscured by very tall trees and rising terrain that slopes skyward at a greater rate than many light aircraft climb.  A "typical" approach would be impossible here and pilots that dogmatically adhere to 3° glideslopes should not even bother trying.  As a result, landings are recommended on 16, departures on 34.  Unfortunately, the wind was definitely favoring 34.  I flew a very steep final approach in a full forward slip.  As I slid my airplane sideways through the air, I watched the treetops pass just below and was reminded of landing on the grass runway at my old home airport in South Haven, MI.  Even with the steep approach I flew, the trees and terrain made it such that I was unable to touch down until half the runway was already behind me.  It did not help that the long tapered wing on the Warrior simply does not like to stop flying.  In the end, it was a landing I was proud of, but I had to work hard for it. 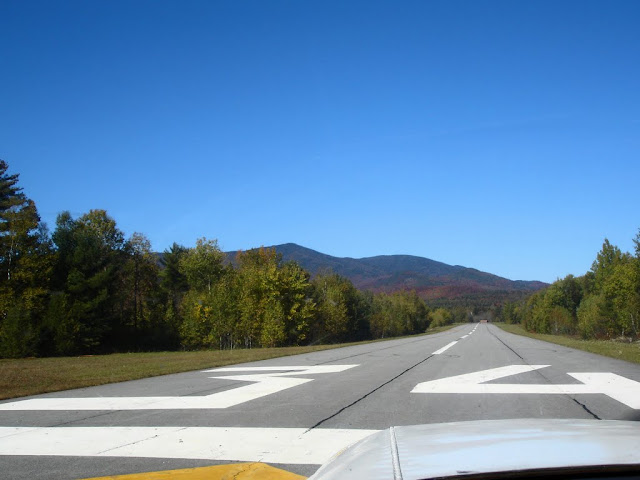 Ready to depart runway 34 at Schroon Lake.  The trees encroaching on the final approach path begin immediately behind the Warrior's tail.  As the photo shows, the runway is well maintained; it is just challenging to reach on days when the wind is out of the northwest. 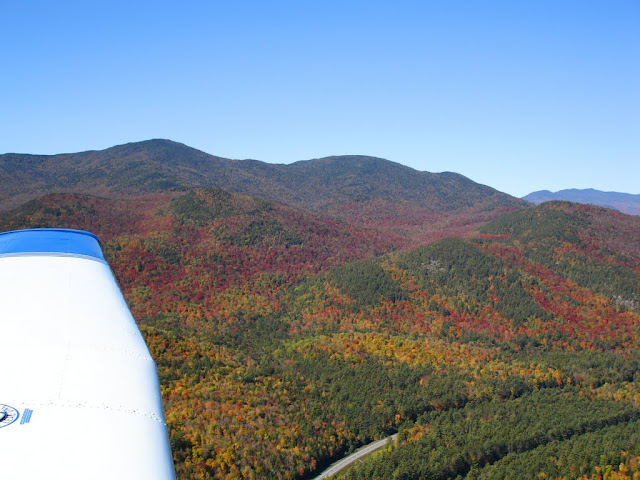 I departed Schroon Lake and turned northward along I-87, enjoying the emergency landing strip below for as long as it was available. 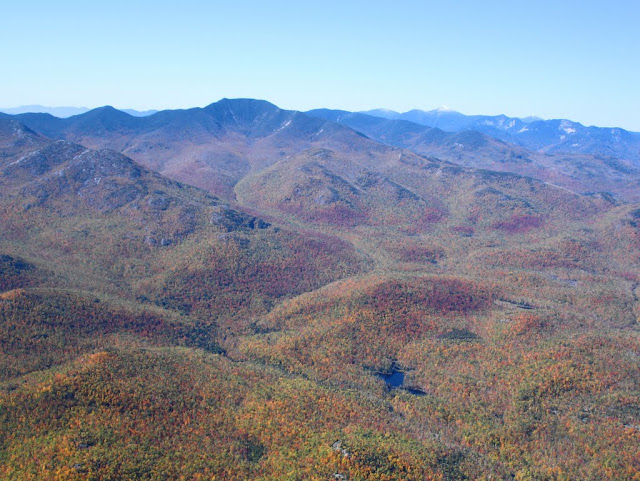 Although the lower slopes of the mountains were still speckled with color, trees on the taller peaks in the northern part of the Adirondacks were already well past peak color. 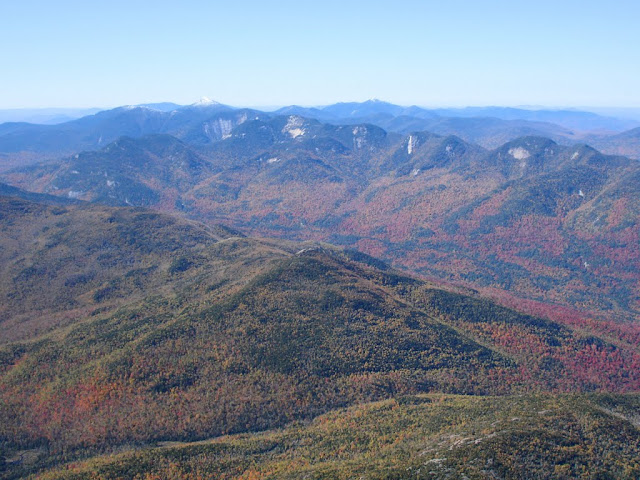 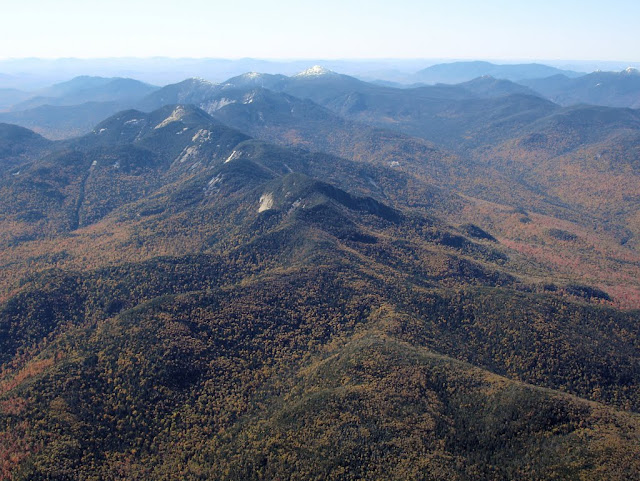 Mount Marcy (5344 feet), the highest peak in the Adirondacks, is already snowcapped (top center of frame, if I read my sectional chart correctly).  I navigated along the downwind side of a valley between Mount Marcy and Giant Mountain to reach Lake Placid, nestled amongst the High Peaks of the Adirondacks. 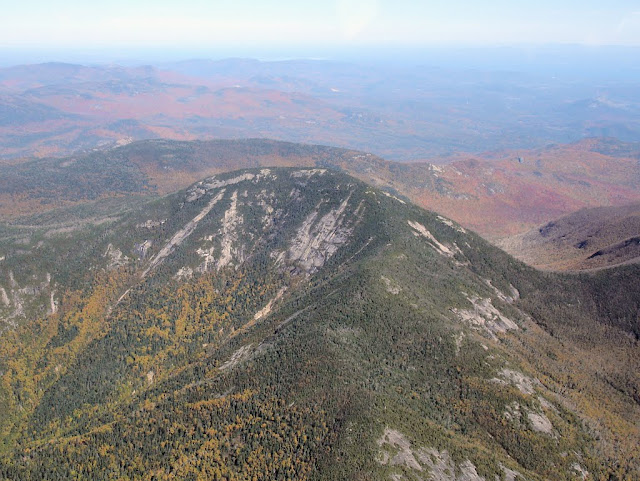 Flying past the peak of the distinctively shaped, yet curiously-named, Giant Mountain.  Topping out at 4,626 feet, it is hardly "giant", but merely the twelfth highest of the Adirondack High Peaks. 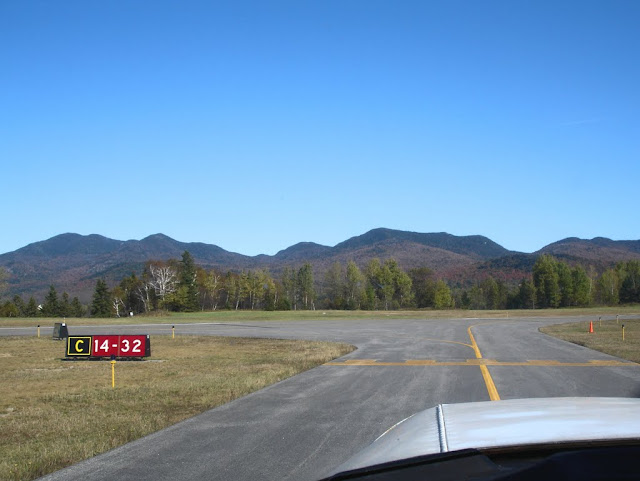 On the ground at Lake Placid, the folks at Adirondack Flying Service arranged a ride for me on the free trolley.  Unfortunately, the trolley driver forgot to stop at the airport and as I stood in the shadow of the nearby Olympic ski jumps, I watched it drive right past the airport.  When an FBO staffer contacted the driver on a walkie-talkie, I heard the driver laugh and say, "I completely forgot, I'll be right back!"  When the trolley reappeared, the driver stretched her hand out the window and jovially waved at me.  "I'm so sorry," she enthused.

Not knowing where to go for lunch (the airport staff recommended The Cottage, which is good, but I had already been there twice), I threw myself on the mercy of the driver and a female passenger for advice.  The two of them generated a huge list of restaurants that, with minimal input from me, they eventually narrowed to three through a consensus process primarily driven by good natured banter.  "Stick with us," the driver laughed, "and we'll have our way with you."  *eep*

Not far from the airport, the trolley deposited me in front of The Downhill Grill.  The driver's recommendation was a good one and I left the restaurant with not only my hunger, but my palate, satisfied.  At 2:30 pm, with a full stomach and an equally full day behind me, I was back at the controls of Warrior 481, preparing to depart Lake Placid (above) for home. 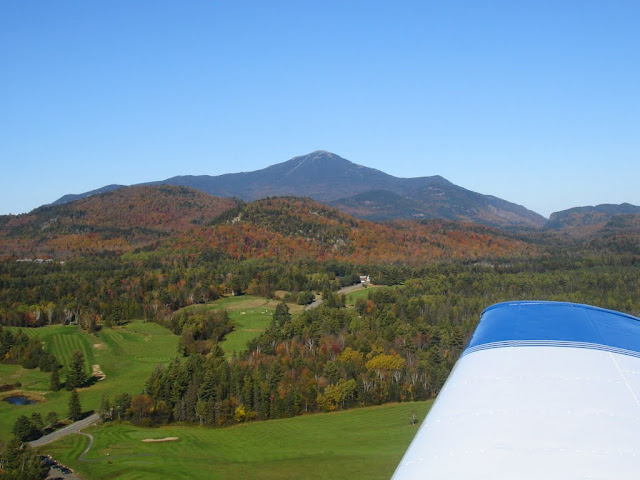 As I climbed away from the Lake Placid airport, Whiteface Mountain (4867 feet) towered over the scene (above).  At its base was Lake Placid (below). 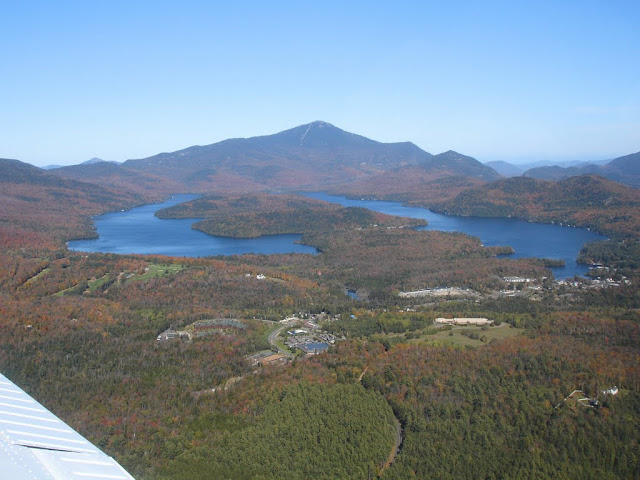 The return flight to Le Roy required just shy of two hours.  As I flew southwest, the terrain of the Adirondacks melted back into the landscape and the brilliant colors transformed back into green.  I had returned to the mundane.

Trips to the Adirondacks are always fun, but sometimes it takes a well-timed vacation day to behold them in their greatest splendor.
Logged by Chris on Tuesday, October 07, 2008 No comments: Links to this post


October 5 was a day to savor great flying weather, fall colors, and the freedom afforded by owning a light aircraft.  The day's flying began with a stop in Dansville, NY for lunch. 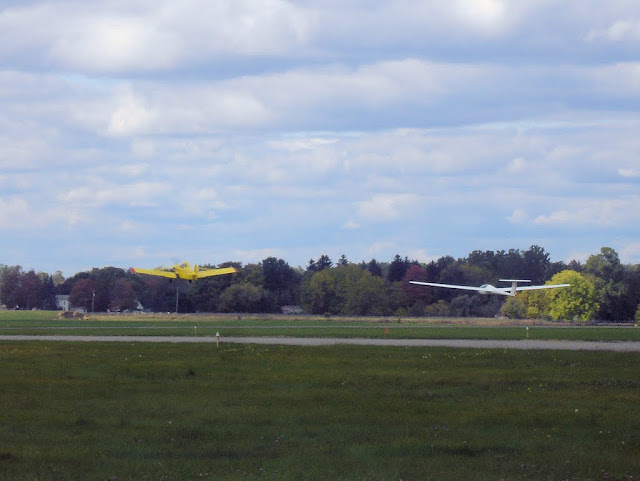 While waiting at the hold line to depart runway 32 at Dansville, I watched this Piper Pawnee tow a glider aloft, breaking ground from the grass runway running parallel to the pavement.  Glider activity, something I do not see often, always makes Dansville an enjoyable place to visit. 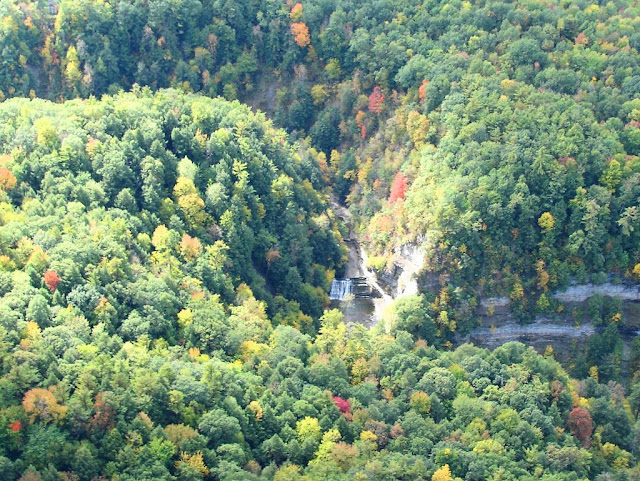 Several days previous, Kristy, The Bear, and I went hiking with several of our friends in Stony Brook State Park.  The park, located just south of Dansville, is a steep, narrow river gorge featuring several reasonably impressive waterfalls.  From the air, the narrow gorge is difficult to find, especially compared to the the massive gorge in Letchworth State Park just to the west. 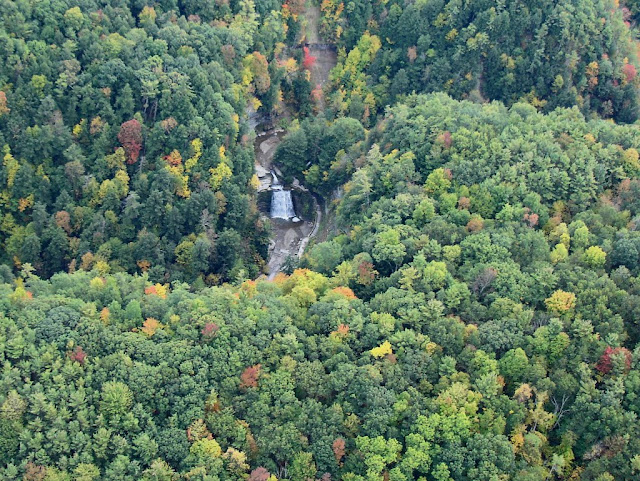 This is probably the largest waterfall we saw on our hike up the river bed.  Stone steps carved directly into the gorge wall allow access to the top of the falls and are visible curving along the right wall of the canyon. 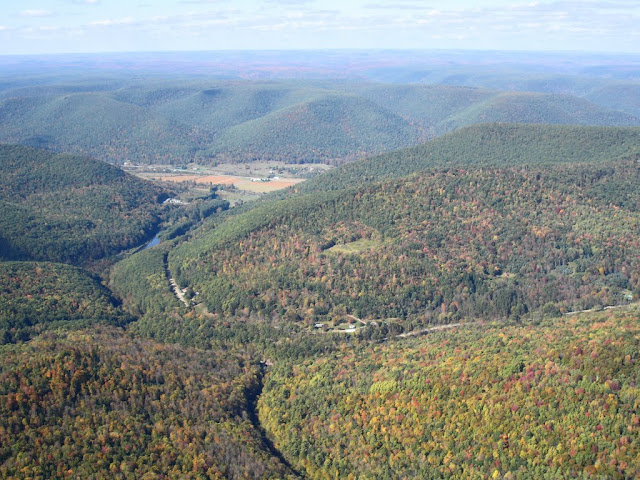 I turned south toward northern Pennsylvania and Wellsboro-Johnston Airport for fuel.  This photo was taken on approach to the airport. 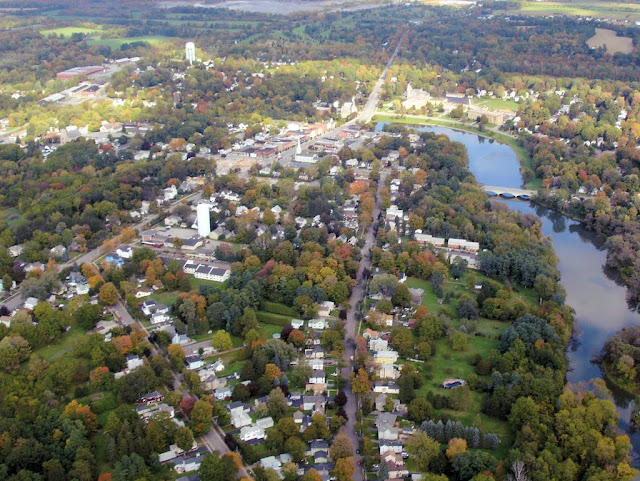 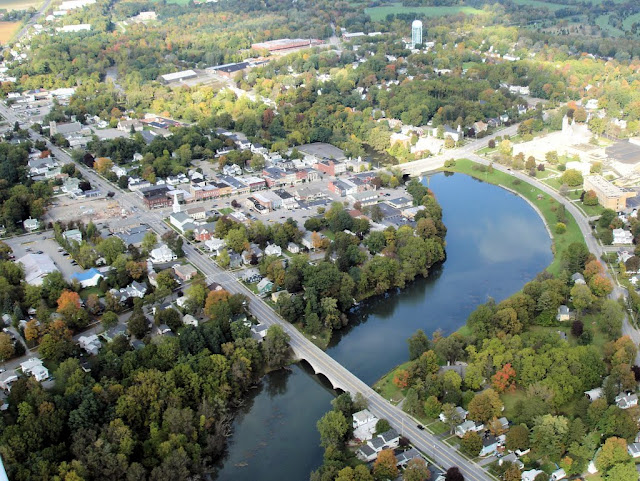 Fully loaded with inexpensive Pennsylvanian fuel, I stopped for some touch and go landings at the Genesee County Airport in Batavia, then turned back home to Le Roy.  This is downtown Le Roy, a picturesque little town with a river running through it.  Le Roy is famous for exactly two things.  Most notably, it is the birthplace of Jell-O.  Had to be invented somewhere, right?

Secondly, Henry Ford received a speeding ticket in August of 1922 while traveling to Detroit on Route 5 (Main Street).  Evidently, Ford was so angry about the speeding ticket that he posted signs outside the village limits warning tourists that the town operated a speed trap.
Logged by Chris on Sunday, October 05, 2008 No comments: Links to this post