Many people that I meet express genuine surprise that I continue to fly in the winter. Maybe that is because Upstate New Yorkers see flying as analogous to boating, which is definitely a seasonal pursuit here in the Land of Ice and Snow (cue Robert Plant's distinctive yowl).

"You mean it has a heater?" they will ask, incredulous. Indeed, Warrior 481 has a rudimentary heater. She may be light on luxuries, but heat is a guaranteed byproduct of her Lycoming powerplant.

Despite the 5°F temperature, I ventured out to the airport on Valentine's Day to exercise the Warrior. First, I had to clear compacted snow away from the 40 foot hangar door. This is undoubtedly the worst part about winter flying. Fortunately, the exercise increased my circulation enough to keep my ears from going numb as I shoveled.

South of the airport, the sky opened into a magnificent blue expanse. At 2400 RPM, Warrior 481 devoured the cold, dense air, burning it with an effortless alacrity that pushed her indicated airspeed over 126 knots and into the yellow arc. Aloft, we meandered southwest, flying along Canandaigua Lake, then following the terrain to Dansville. Dansville was quiet and I decided to do a couple of touch and go landings there.

Lining up on final approach, the center line on runway 32 presented one possible solution to the ages old conundrum: "what do you do with a drunken sailor?" Answer: get him to stripe the runway at Dansville! I wondered if the "artist" that wrought this masterpiece of a dashed center line made any effort to approximate a straight line at all; even the individual line segments were wavy. I think a five year old with a rattle can of paint and a two by four could have produced a better product.

The landings were good; soft, gentle, and well controlled. When I was finished at Dansville, I hopped over the terrain west of town to visit one of my favorite sightseeing destinations, Letchworth State Park, where the late afternoon sun cast dramatic shadows across the gorge. 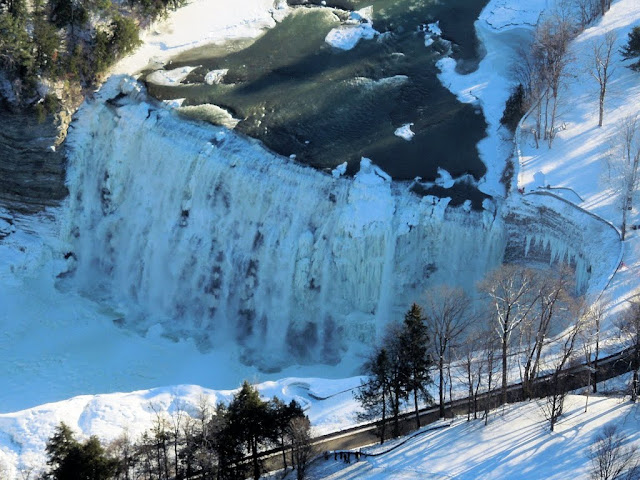 From the partially frozen falls, it was obviously cold down below.


I stopped at my old home base in Le Roy to take on fuel. I like to patronize the airport whenever I can and Ray has been kind enough to leave my security code active. This was good because it was so cold in Le Roy that my hands and ears went numb in the time it took me to fuel the Warrior. When finished, I took refuge in the heated terminal building to warm up before departure.

"Warrior 481, I'm not receiving altitude from your transponder." This from Rochester Approach as I transited their airspace back toward Sodus. I looked down at the transponder and caught it in the act of just starting to report pressure altitude, evidence that my altitude encoder was slow to warm up even though the stop in Le Roy was brief.

Uncovered ears, gloved hands, and altitude encoders clearly don't like the cold. But to a wing and a normally aspirated engine, it just does not get any better!
Logged by Chris on Sunday, February 14, 2016 2 comments: