Take Your Coworkers to the Airport Day, 2004


Dave and I hosted a cookout at the airport for friends and coworkers to get a taste for airport life.  All photos on this page were provided by Cap'n Dave. 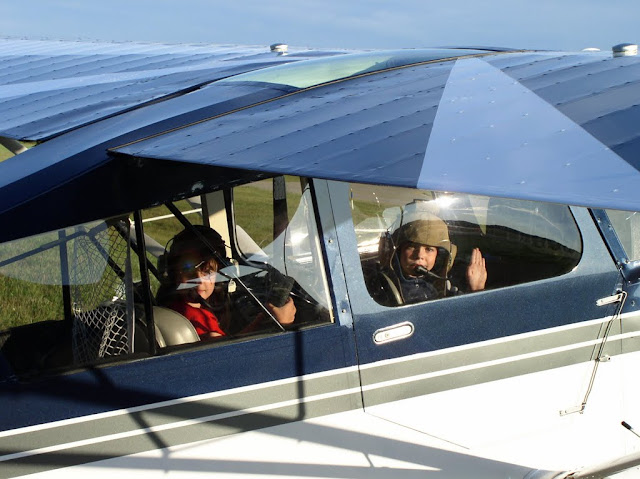 Headsets and intercoms can provide surprisingly endless entertainment, even on the ground. 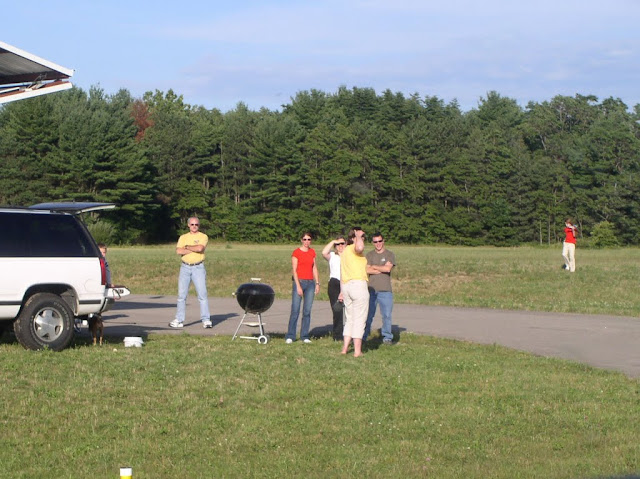 A grill is critical to the success of any cookout.  "If you grill it, they will come."  But it helps if a good grillmaster is assigned to the task (which we discovered to our woe when Arjo did the cooking).  Cap'n Dave was assigned this duty thereafter. 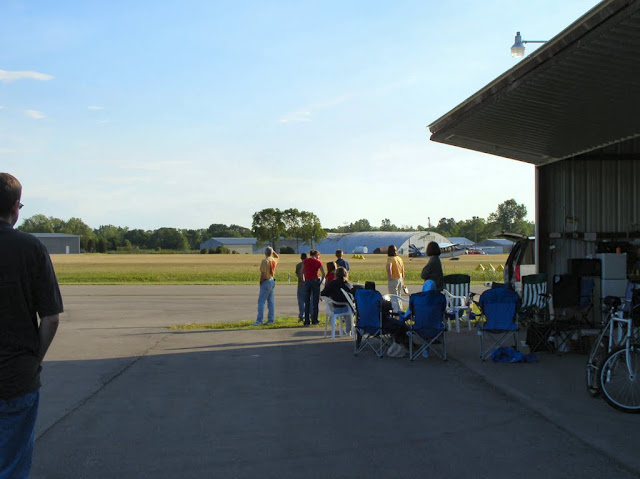 For pilots and non-pilots alike, grading landings is an essential aspect of the airport experience.  Here, the group watches Dave three-point the Decathlon on the grass.  I don't remember what the score was, probably lower than he deserved.  You know, just because. 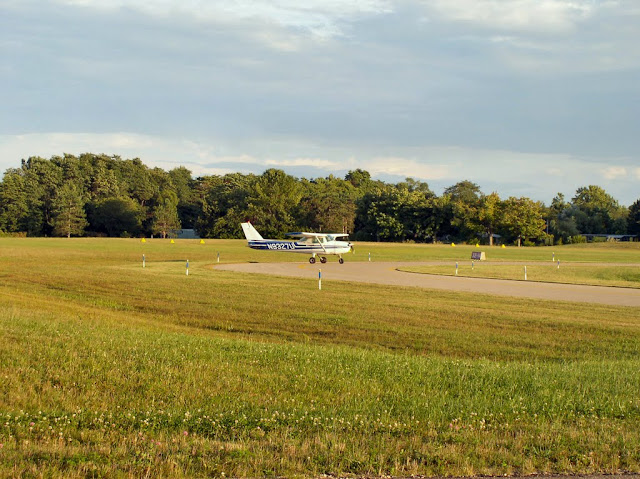 With a "mighty roar", the sound of Kent's departure preparations in two-seven-uniform officially signals that the party is drawing to a close. 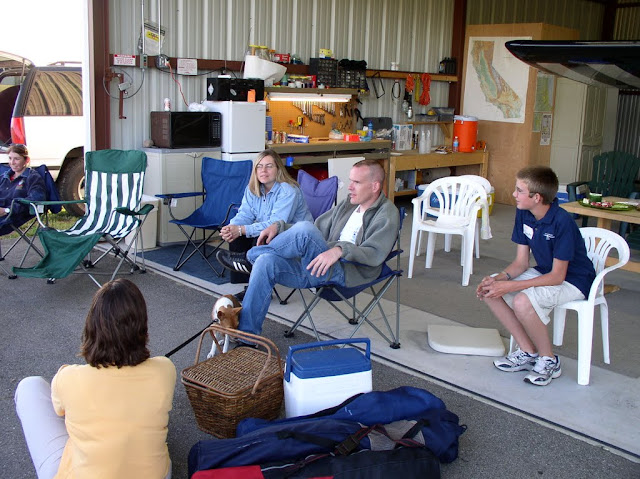 "There I was, 1000 feet up and inverted when the control stick snapped off in my hand..."
Mild exaggeration is par for the course when hangar flying at the end of the day.
Logged by Chris on Saturday, August 14, 2004 No comments:

Email ThisBlogThis!Share to TwitterShare to FacebookShare to Pinterest
Labels: Sharing aviation w/ others


My life is easily compartmentalized into tidy little boxes based on where I've lived over the years.  As a kid, I lived in the suburbs north (very north) of Detroit.  In college, I lived in Flint, MI.  Grad school was in southern Indiana.  After grad school, we moved to Kalamazoo MI.  Although Kalamazoo is in the same state where I lived most of my life, childhood friends, family, and familiar geography seemed far away.

The amazing thing about my airplane is that it can span the modest geographical distances between my current reality, my college life, and my childhood.  I departed South Haven bound for Lapeer to visit my Uncle Ron and Aunt Barb.  When I was young (prior to age 7), I spent a lot of time with them at their house on Lake Orion.  As I grew older and moved progressively farther away, it became harder to see them.  Over time, we grew apart.  My goal for the day was to reconnect, even if just a little bit. 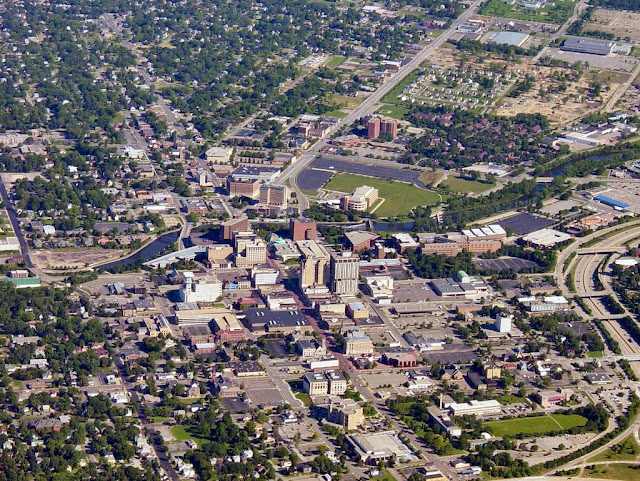 On the way to Lapeer, I passed directly over Flint, MI.  From my perspective, I could even see the red brick used to pave Saginaw Street through downtown.  The campus of the University of Michigan - Flint can be seen along the south bank of the Flint River, starting in the center of the frame and moving toward the rightmost edge.  Though I left Flint and undergraduate life behind a decade earlier, the impact of my time there has been long lasting. 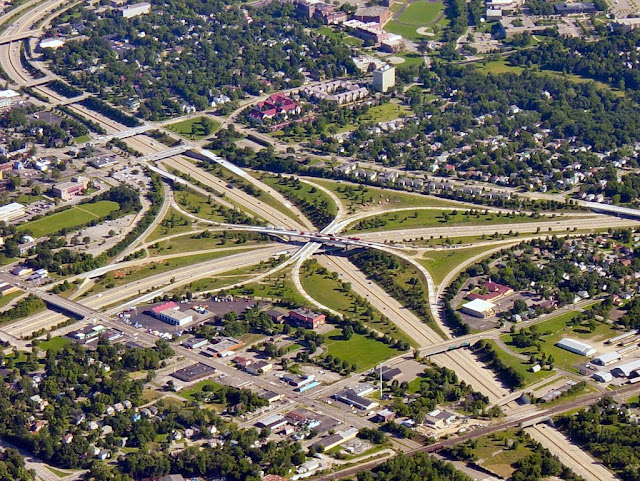 This spider-like junction of I-69 and I-475 is a dramatic departure from the traditional clover leaf.  The interchange is located southeast of downtown Flint.  From the ground, it seems like a mess; tentacles strewn every which way.  From the air, the grand design of the whole thing can finally be discerned.

As an undergraduate at the University of Michigan - Flint, I lived in an apartment in the East Village, the heavily wooded older neighborhood at the upper left of the frame.  That apartment had everything.  It was a mere five minute walk to campus.  Granted, I had to cross that overpass in the upper left-hand corner which was a bit brisk in the winter.  The apartment had low rent ($325 / mo, heat included, split two ways!).  And, finally, it had a built in alarm clock.  The woman upstairs would often wake us up at 7:00 am on the weekends playing George Michael's "Faith" album loud enough that we could clearly identify it.  Early morning vacuuming was another way to make sure we were up and at 'em earlier than we might otherwise have chosen.
I landed at Lapeer and gave my uncle and aunt airplane rides over the home they were building north of the airport.  It was terrific to see them again and to give them a taste of flying in Warrior 481.

When my visit was done, I departed Lapeer and was almost immediately crossing back over Flint.  From early childhood to the college years in a few short minutes.  An hour later, I was on the ground in Kalamazoo and back to my adult life.  The airplane is, indeed, a bridge.

And on a completely unrelated note...

On the way back to South Haven, I circled Carpenter's Dairy Farm in Bangor to photograph their immense corn maze.  I later donated the photos to the family, who used them to make post cards advertising the attraction.  It's amazing what you can do with a tractor and a GPS! 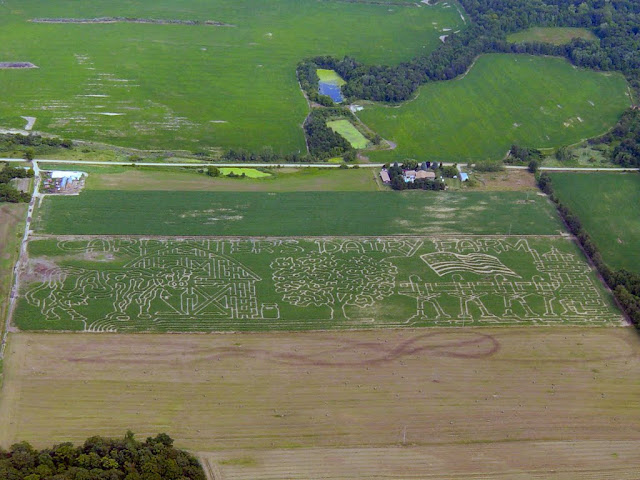