During my early childhood, I spent a lot of time with my Uncle Ron and his family. They lived on the water -- Lake Orion in southeast Michigan -- and owned a powerboat, which more or less guaranteed that there was always something fun and cool to do at their house. A capable mechanic who owned a truck repair business, I learned a lot from him at a young age. I enjoyed spending time with him because he was always patient with me and possessed a great sense of humor.


As my education and career progressed, I moved away from Oakland County and then to two different states, which resulted in seeing less and less of my family over the years. In October 2016, my uncle was diagnosed with a brain tumor after being debilitated by an excruciating headache that lasted for multiple days. To hear him tell it after the fact, the tumor was approximately the size of a golf ball. On November 4, he was released from the hospital after it was successfully removed surgically.

On November 5, I was in the air over Ontario Canada and on my way to see him.


Warrior 481 is subject to airworthiness directive AD 98-02-08 that requires an inspection of the hollow crankshaft bore for corrosion every 100 hours. This is mandatory for my ship because the interior of the crank is already pitted and has been for many years. The pitting has not worsened in the time that I have owned the airplane. This does not surprise me given how much oil is present inside the crankshaft and the fact that the airplane is regularly flown to keep that oil moving around. Nonetheless, every mechanic that has cared for my airplane has dutifully conducted this inspection. If anything, this inspection has brought me to grief more than it has added value, but it is still legally required. 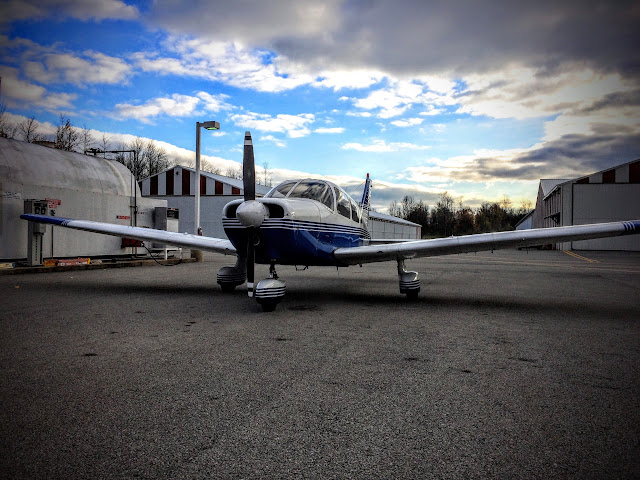 A week before departing to visit my uncle, I did a night currency flight and realized that I only had four hours remaining before the inspection was due. Considering that the round trip to Michigan requires at least five hours, I needed to complete the inspection before leaving. Otherwise, conventional wisdom holds that "the wings would fall off" midway across Canada on the return, right? No problem: Ray and Mike at BAC Services slotted me into their schedule with urgency and took care of it. 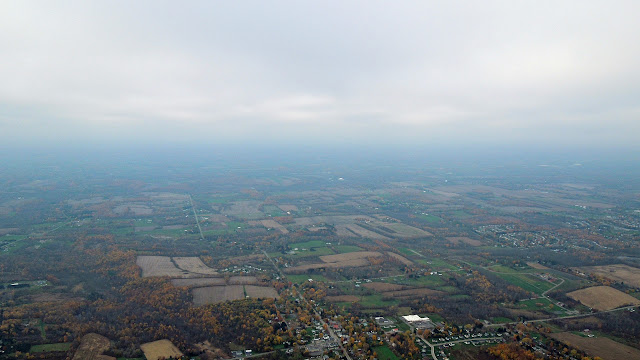 An overcast covered western New York from 3,00 to 4,000 feet MSL. I picked up my clearance to Pontiac in the air and climbed through the deck, another excellent example of how 0.1 hours of logged IMC time can enable a cross country flight that would have been deferred had I been VFR-only. 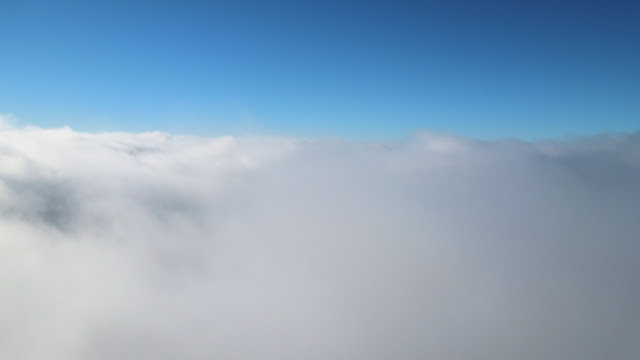 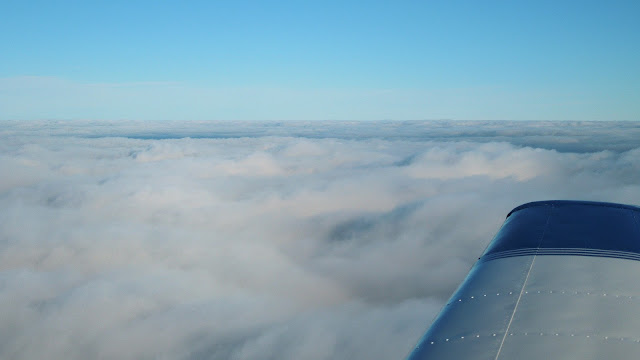 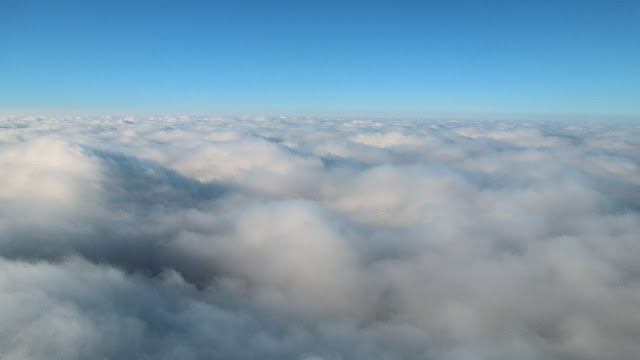 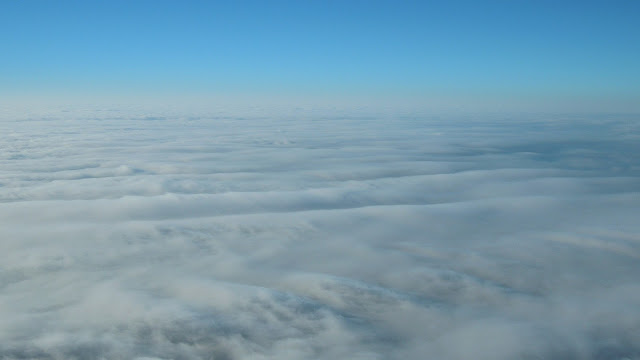 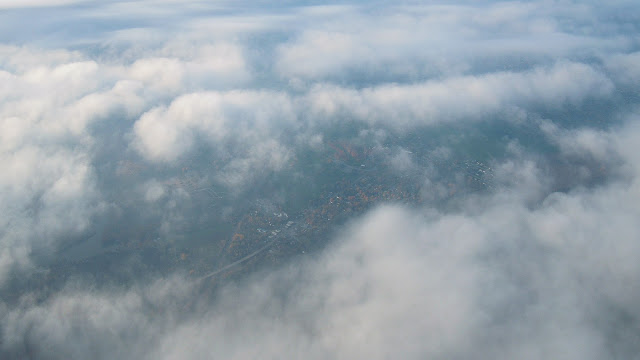 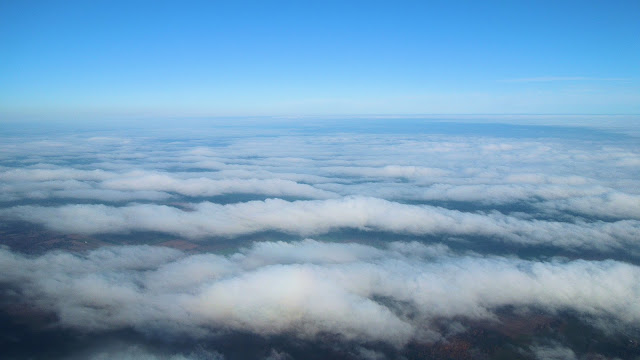 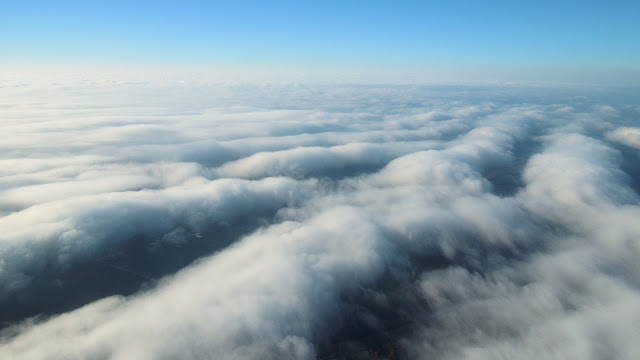 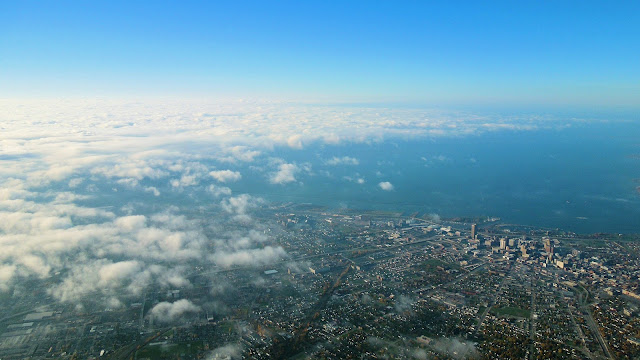 The ceiling broke up east of Buffalo and the sky remained utterly clear, if a little hazy, for the remainder of the flight.


The flight along Victor 2 toward metropolitan Detroit was routine and uneventful. As usual, Cleveland Center's transmitter in this area was weak. I dutifully reported an ELT signal to Center as I came within range of it and reported again when it faded away. Was it a downed aircraft? A false alarm? I'll never know.

While still over Ontario and just west of the Aylmer VOR (YQO), Cleveland Center cleared me direct to Pontiac, a time savings of perhaps three minutes from my original full route clearance.


As I crossed back into Michigan, I found myself thinking about my uncle. The very notion of brain surgery is a terrifying one. Was there any collateral damage? Would he be still be himself or would he be changed somehow? 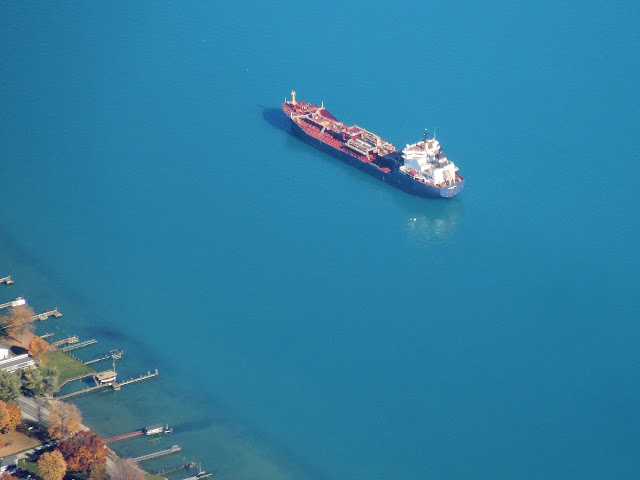 Those extra three minutes were quickly eaten up by a series of "vectors for spacing" given by Selfridge Approach. It was not at all clear to me what I was being separated from. 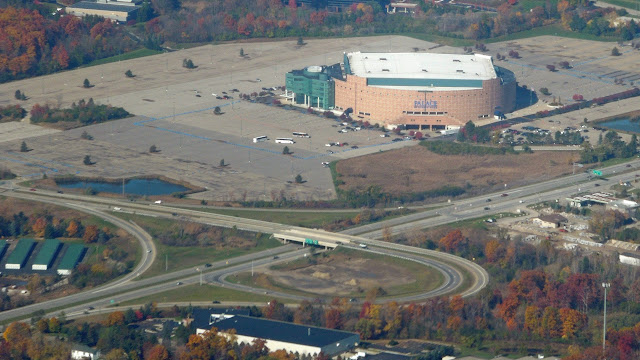 Descending toward Pontiac, I passed the Palace of Auburn Hills. Though I have watched a few Detroit Pistons games there, I have seen a lot more concerts. The last one was in 2015 when Kristy and I met several of our friends to see Rush on their R40 (farewell?) tour. 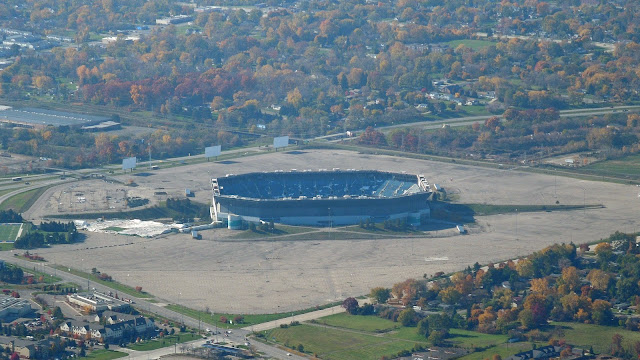 I wish someone would do something with the Silverdome for it is neither silver nor domed. I can't speak for the neighbors on the ground, but it's an eyesore from the air with the upper bowl seating apparently littered with shreds of inflatable roof. 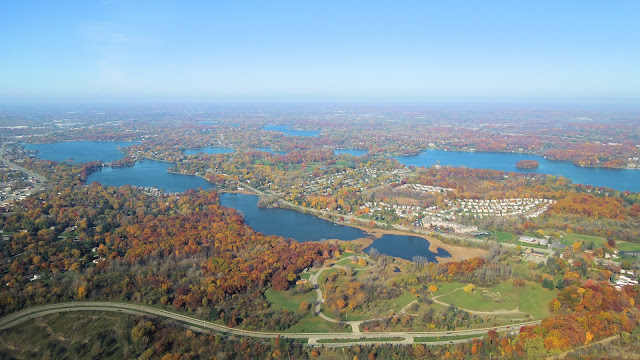 I was cleared for a visual approach to runway 27L and flew the RNAV approach for practice. 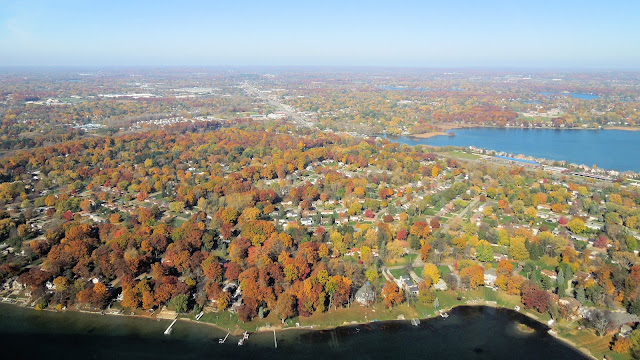 After I landed at Oakland County International, Mom met me at Michigan Aviation. We set out for my uncle's house after getting lunch at the new Latin restaurant in Clarkston, Honcho. It was really quite good in spite of a decor that tried too hard to achieve that post-industrial chic look; the faux plywood laminate tabletops were a bit much.

As we drove to Uncle Ron's house, I realized that my anxiety was increasing. Would he be OK? Unfortunately, I had plenty of time to dwell on this. My aunt and uncle built a large house out in the middle of nowhere that was nearly an hour drive away.

When we reached the house, I followed Mom inside. Before I set eyes on Uncle Ron, Mom exclaimed, "I didn't know we'd be looking at stitches!" Peering around her, I saw my uncle seated in the kitchen and sporting an uncovered vertical scar just forward of his right ear. He looked pale and tired.

"Not stitches. Staples," he corrected. Before my mother could exclaim again, he added, "Brass ones," and managed a shadow of his old grin.

Oh, he's going to be just fine, I thought.

We talked about that day's flight. He was particularly curious about the airworthiness directive that nearly derailed my visit. We also talked a lot about the surgery, the high-tech way it was performed, and what the experience was like for him (to sum up, it wasn't fun). He gave me a full tour of the house he had built because the last time I saw it, they were still hanging drywall. Though he was struggling to breathe and looked exhausted when we first arrived, his energy increased and his breathing improved as we interacted. I think the stimulation of our visit combined with moving around the house on foot made all the difference. Though the tour was ostensibly for me, it was excellent therapy for him. He was obviously pleased to have us there and it appeared to me that our visit did tremendous good. We departed knowing that our visit had fortified him.

I was glad to have made the trip.

That evening, I borrowed Mom's car and visited my dear college friend Cher an hour north in Bay City. She originally intended to come to me that evening, but her credit card had been compromised and deactivated, leaving her no means of buying gas. I thought that was awful, so I drove north and bought her dinner.


The next morning, I reunited with high school friends Ed (and his girlfriend Jessica whom I had not met previously), Lisa, Heather, and Joe. Though I have been in contact with Joe and Heather over the years, I had not seen Lisa in person since high school graduation nor Ed since my second year in college. Unfortunately, I didn't think to take any pictures with my friends. What was I thinking?

All trips to Michigan end with a return home.

Ed and Jessica were kind enough to drop me at the airport after breakfast so that I could make my way back to New York. 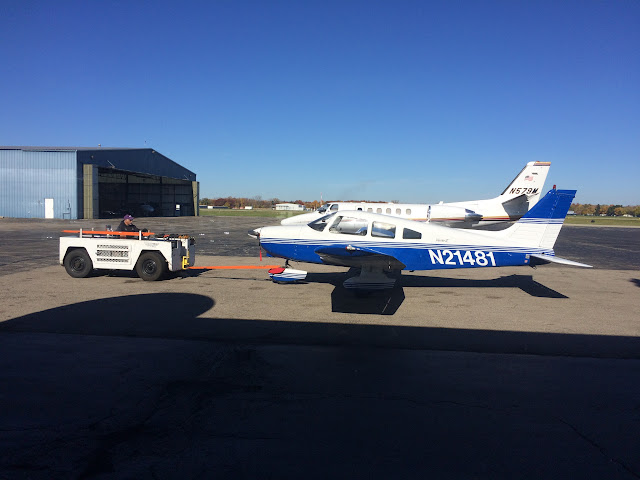 After wrapping up my final check on the weather, I was prepared to hike to the far corner of the Michigan Aviation ramp where my airplane was tied down. But when I looked up from my iPad, I saw that the line staff was towing the Warrior to a spot right outside the lobby door. I was pleased by the service, but even more pleased by their use of a red cover on the nosewheel fairing to prevent it from being scratched by the tow bar. If only all FBOs followed their example.

We have settled into a comfortably circuitous routine for departing Pontiac, ATC and I. This day was no exception. It goes something like this:

Step 1: I file a palatable overland route home from Pontiac. I try something different every time, but it never matters -- the outcome is always the same.

Step 3: The human controller in Pontiac Tower reads my flight plan request to avoid flying over the Great Lake and negotiates with Center for something more akin to what I filed in the first place. Aren't humans great?

I was cleared for taxi before this negotiation was complete and received the new clearance after I completed my preflight checks at the Bravo Runup Pad. Within minutes of programming the new clearance into the navigator, I was airborne and receiving eastbound vectors from Detroit Departure. 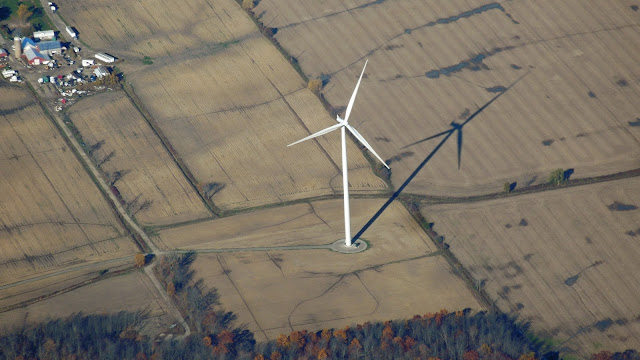 I was struck by the densely packed suburbs north of Buffalo. Sure, I grew up in suburbs radiating dozens of miles beyond Detroit, but I was used to suburbs with space.


As I let down toward the Williamson-Sodus Airport, I had some concerns about the ride. Forecasts called for moderate turbulence over much of New York state from the surface to just shy of my cruise altitude. But the air remained smooth in the descent and the wind was dead calm as I squeaked Warrior 481 onto runway 28. It was yet another example of how turbulence AIRMETS can be hit or miss.

When I landed at home, I was very glad to have made the trip and pleased to have had the capability to accomplish it. I have expounded previously on how my airplane makes such an effective bridge to the important people in my life. It is not my intent to belabor a point already made many times over. Nonetheless, I am losing count of the number of times that the airplane has reunited me with old friends, strengthened existing relationships, or brought me to someone in need just when it mattered most. This weekend, Warrior 481 facilitated all three situations.

Because I have observed many instances of aviation enhancing human connection over the years, I should not be surprised when it happens. Still, I am struck by it every single time. Maybe I am a slow learner. Or maybe it's because of mindset. I pursued flying for the technical challenge and for opportunities to gaze upon the Earth from above; I did not consider flying as a means to connect or stay connected with people.

Still, I would be hard pressed to name an avocation that requires more knowledgeable skill, creates stronger human connections, and comes with a better view than flying.

I never saw my uncle again. His recovery was hard, complicated by cardiac issues, two bouts of pneumonia, blood clots, and a fall resulting in a fractured spine. After experiencing a litany of complicating conditions that impeded his recovery, he passed away in the hospital surrounded by as many family members as could be summoned on a moment's notice. This did not -- could not -- include me because I live too far away. There is magic in flight and I am grateful that flying made it possible to have one last visit with him. But on his final day, those reliable aluminum wings would not have been enough to get me there in time.
Logged by Chris on Sunday, November 06, 2016 4 comments: