Bless me, Bubba, for I have sinned.

For the uninitiated, Bubba is the fictitious deity of All Things Aeronautical and it is upon His capricious whimsy we enjoy good flying weather. Bubba was an invention of Dave's meant to cajole us into playing hooky from work to fly lest we incur Bubba's wrath for squandering the gift of a nice day.


The "adventure" actually began a few days previous with The Bear's simple request.  "Me fly in the daddy airplane?"  Kristy and I planned a quick trip around this request, an early dinner at Venango Regional (FKL) in Franklin, PA.  Venango is reputed to have a nice Italian restaurant on the field called Primo Barone's.  About an hour's flight from home base, it seemed like a perfect destination. 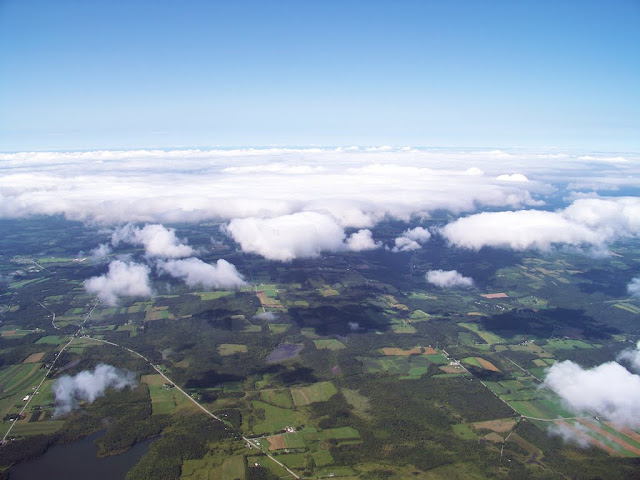 The intended day arrived with a dreary flourish of low scud hanging over the treetops.  Nonetheless, I made the 45 minute trek to the airport to work on the airplane.  While there, I planned to meet a mechanic for some  preventative maintenance on my nose strut.

Time passed quickly and my stomach announced arrival of the noon hour with a loud rumble.  After four hours at the airport, the strut was repaired, the wings were washed and waxed, and the ceiling had lifted significantly.  I flew to nearby Dansville for lunch and though conditions were VFR, the ceiling was lower than I prefer for long trips and the ride was bumpy.  I decided that a flight with Kristy and The Bear was not in the cards.

After lunch, I practiced some touch and go landings before spiraling up through a large hole in the cloud deck.


At 7500 feet, I discovered that the low ceiling was a highly localized phenomenon (above).  The cloud cover was breaking up at a rapid pace under the afternoon sun and the air no longer seemed to be full of potholes. 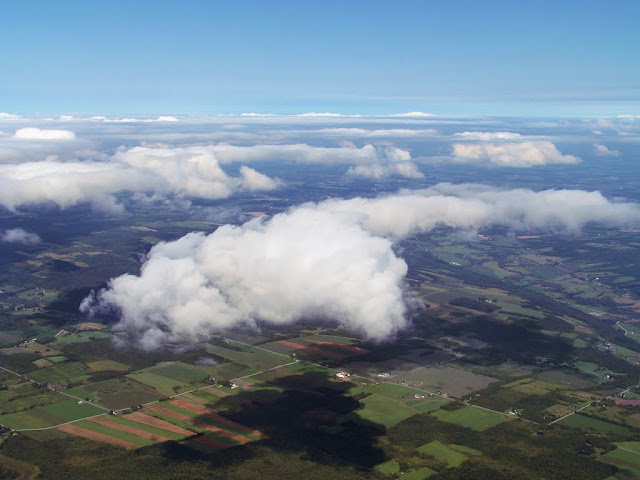 I set course for Le Roy as the ceiling continued to dissipate.  Perhaps there was still opportunity to give The Bear that airplane ride she wanted.

Back on the ground at Le Roy, I did the necessary flight planning and talked with Flight Service.  Conditions were improving all along the route.  Winds aloft were forecast to be relatively light and orthogonal to our heading, so they should not have been much of an issue.

I called Kristy and told her that our trip was a "go".  Rather than drive herself and The Bear all the way to Le Roy, we decided to meet at the Williamson-Sodus airport, closer to our house.

Whenever I preflight the airplane, I always check the fuel level and repeat to myself, "I have X hours of fuel on board".  Leaving Le Roy, I had three hours of fuel available.  Venango Regional would be a 1.5 hour flight from Williamson and fuel was available on the field there for the return trip.  This seemed more than adequate.


Flying through Rochester's Class Charlie airspace en route to Williamson, I hoped that Kristy remembered to bring The Bear's hearing protection from home.  Without it, I did not want to take her flying.  When I landed and taxied to the ramp, I was relieved to see that Kristy had remembered this important piece of safety equipment.  Holding hands, they walked across the ramp to the airplane and The Bear greeted me with an enthusiastic, "hi Daddy!"  She pointed to her car seat, already belted in place.  "Me sit in my seat?"
In cruise flight, the majority of the cloud ceiling was gone.  We were past Rochester when Kristy realized that she had left "The Backpack" in her car.  "The Backpack" is a critical toddler travel item containing diapers, paper, crayons, and a variety of toys.  Fortunately, The Bear seemed perfectly content to watch the landscape passing beneath our wings and did not require further entertainment.

After forty five minutes, we were still in New York.  The winds aloft were significantly stronger than forecast.  I began to do the math in my head.  If we continued to Venango and ate dinner, we would have a late night.

We decided to divert to St Mary's, home of The Silver Wing restaurant.  St Mary's was due south of us and I turned to the new heading while communicating our change in plans to Cleveland Center.  On our new heading, we gained an additional 20 knots of groundspeed.


From the traffic pattern, it was obvious that we were not to find food at St Mary's.  I could see that the restaurant's parking lot was completely empty.  Nevertheless, we landed to stretch our legs.  At this point, it was 6:45 pm and we were all very hungry. 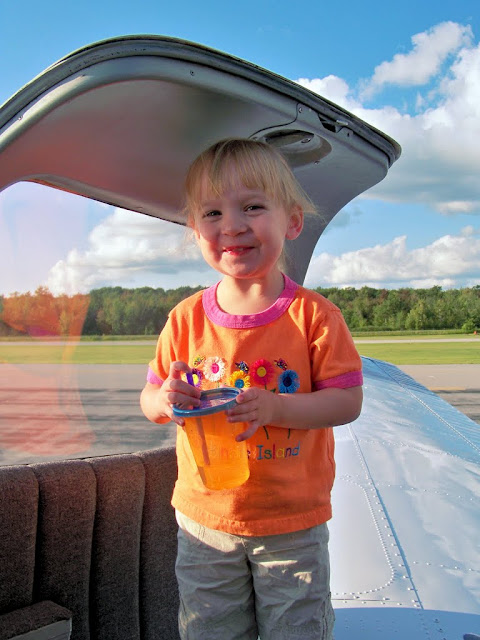 Checking the fuel levels with a dipstick, as I always do, I was surprised to find only one hour's-worth remaining.  How could that be?  As I pondered this, I realized that there were two contributing factors at play.  One was the unexpectedly strong headwind that held us aloft and en route to Venango for much longer than planned.  This should not be a problem if I had closely monitored our flight time.  I didn't.

Another factor was that I consider the Williamson-Sodus airport where I met Kristy and The Bear to be part of the "local area" to Le Roy.  And, yes, while a cross country flight between Le Roy and Williamson-Sodus does not exactly push the envelope for me, they are nearly 40 nm apart.  I had not properly considered this in my flight planning.

We would need fuel from somewhere to get all the way home to Le Roy. 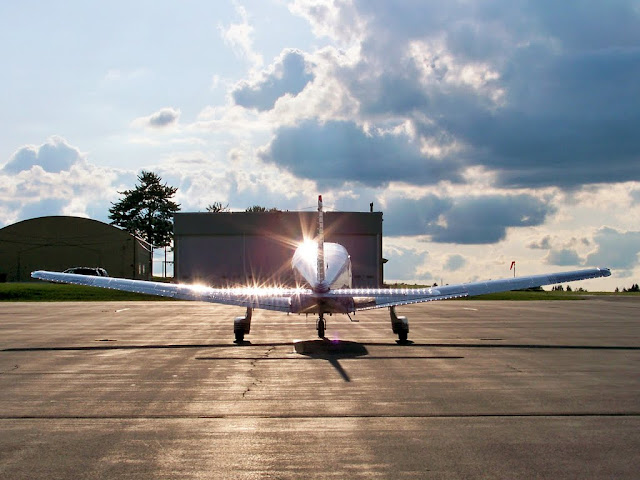 I made an attempt to use the non-standard self-serve kiosk near the fuel pump.  It did not recognize my credit card and I realized that it probably required a special card issued to airport tenants (or "Kard", per the front panel of the battered device).  The airport was completely deserted.  Thoughts of hunger were gone, replaced by thirst for 100LL.  How would I get my family home safely?

I considered my options within 30 minute's flight.  Bradford Regional was on the way home, but the FBO would be closed and I already knew it was full service only.  Farther north along our route of flight home was Olean, NY.  Per the sectional chart, fuel was available and I decided that looked like our best opportunity.

Once on the ground at Olean, we taxied to the fuel farm where I surveyed the area and let fly with an expletive that, fortunately, The Bear could not hear.  The pump lacked a self-serve terminal and the FBO was closed for the night.  I checked fuel levels again with the dipstick.  The right tank held 30 minutes worth.  The left was too low to measure, so I called it "zero".

I called Ray, owner of the Le Roy airport, to see if the next nearest airport with fuel (Wellsville, about 10 minutes away) had self-serve fuel.  Ray verified that it did not and that the FBO would be closed.  It was just as well, I was too far into my reserve fuel to comfortably fly anywhere else. It was 7:30 pm and the sun had already retreated behind the large hangar west of the fuel farm.

So I pursued the only option remaining to me.  I dialed the emergency number listed on the Olean airport FBO door and threw myself on the mercy of Bruce, who answered.  After explaining my situation, Bruce told me he would be there in thirty minutes to help with the fuel.

As the sun set, the air cooled significantly.  Kristy and The Bear spent time doodling on scrap paper in the relative warmth of the airplane.  When The Bear grew bored of this, she and I wandered down to an open T-hangar and chatted with the old timer there.  He was preparing to sell his Piper Tripacer.  Both airplane and owner looked tired and the fellow explained that neither of them had flown in the few years since he decided that he was too old to fly.  He told me about finding the airplane years ago in an apple orchard near Rochester and pointed out that the wings were aluminum skinned rather than the factory stock fabric.  "Painted the wings myself, though it's starting to flake off," he added with a touch of melancholy.  It was obvious that the airplane meant a lot to him - why else would he have held on to it for so long after he stopped flying?  "Spent my younger days working when I should have been flying," he lamented.

The Bear snuggled tightly under my chin and nodded when I asked if she was cold.  I thanked the fellow for his company and wished him well.  He echoed the well wishes and told me that he would have gladly given me fuel out of his own tanks if they weren't already dry. 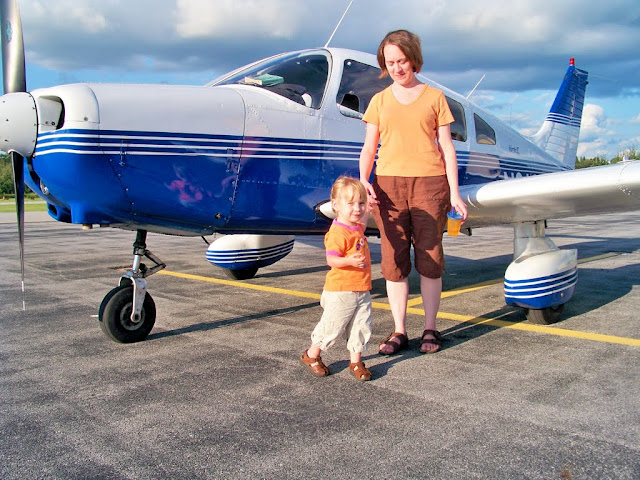 True to his word, Bruce arrived at 8:00 pm as the sun was setting.  With tanks full to the tabs (3+ hours of fuel), we departed runway 4 in still air.  The western horizon glowed crimson in the wake of the departed sun.  It was a tranquil end to my "Never Again" story.  While displeased with myself for being lax, I was happy that my habit of regularly checking the fuel ensured that the story did not end with the engine going silent en route as many "Never Again" stories do.

I don't know what penance Bubba demands for such a sin, but I do know that the lesson was well learned.

Cruising home through the darkening heavens, Kristy suggested that this blog entry be titled, "A Series of Unfortunate Events."  I replied that something along the lines of "Humble Pie" might be more appropriate.

"You're forgetting, there was no dinner OR pie tonight," she reminded me.  Right.

After an unremarkable landing at Le Roy, we wiped bugs from the freshly waxed wings.  Exhausted and hungry, we settled into the car for a long drive; we still needed to retrieve Kristy's car from the Williamson-Sodus airport about 75 minutes away.  Though we left Le Roy around 9:00 pm, we would not arrive home until after 11:00 pm.

Ray stayed late at the airport to ensure that we arrived safely, as I knew he would.  After checking in with him, we drove through the airport gate and The Bear offered this cheery coda to our difficult evening: "Bye bye airplane house!"

Despite it all, The Bear still enjoyed herself and her airplane ride.  In fact, two days later, she asked to fly again.