Very quickly, plans fell into place to retrieve Warrior 481 from Oakland County International, where we had abandoned her on August 7 owing to pervasive thunderstorms along the route home.  Two of my fellow Le Roy pilots very enthusiastically volunteered to help: Ed with his Arrow and Darrell with his Skyhawk.  Matt had dismantled his Lancair on August 6 for annual and was unable to help, though this did not stop him from participating in the planning of the rescue mission.  This mostly amounted to him teasing Darrell about being "part girl" for not wanting to fly over Canada without a valid passport.

In the end, Ed and I flew over Canada early Friday afternoon en route to Pontiac.  Along the way, I obtained the ultimate pre-flight briefing by actually flying the route before I had to fly it myself.  Most of the flight was at 6,000 or 8,000 feet.  The Arrow punched through building cumulus, going from visual to instrument conditions and back again rapidly, flying through vast canyons of vapor.  It was my first time in IMC in a light airplane.

Ed settled the Arrow gently on Runway 27 Left at Pontiac and we taxied to the Pontiac Air Center (PAC).  Warrior 481 was waiting there for us, still bundled in her cockpit cover.  My mother was there, having stopped on her way home from work to check on the airplane and unaware that I was en route.  She helped me wrangle the cover off the Warrior.  During preflight, I found that the nose strut had gone flat, but Doug from PAC was able to add some additional nitrogen in between juggling the needs of two private jets and a helicopter that arrived while we were there.  We watched Ed depart in the Arrow while still waiting for the nitrogen charge.

I flew home at 9,500 feet in clear skies with an average ground speed of 125 knots and a true airspeed of 120.  The building cumulus that Ed and I saw flying west had mostly dissipated.  It was a quiet, smooth flight home with my iPod quietly playing symphonic music in the background.  ATC chatter across Ontario, as usual, was minimal. 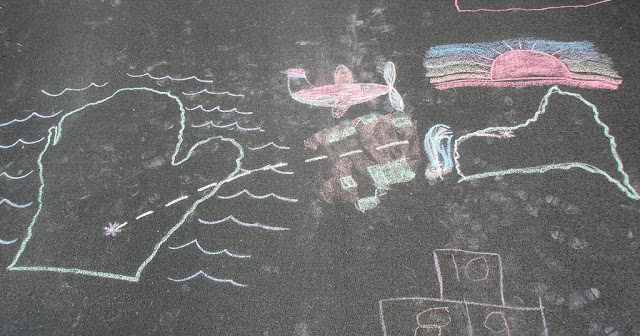 Back home from the Le Roy airport, I discovered this chalk mural depicting my day's adventure inscribed on the driveway, courtesy of my family.  Out from Pontiac, over the cross-hatched farm country of Ontario, past Niagara falls, and back home at dusk.  I must have made for a curious sight, standing on a step ladder in the middle of my driveway trying to get the whole image in frame.  Talk about low level aerial photography.

I think everyone was glad to have Warrior 481 back home.

During our recent visit to Kalamazoo, we spent a morning at the Air Zoo, where I once filled my Saturdays giving tours.  While we were there, we got to spend some time with Nate, Tamra, and my former partner in crime, Dar.  The museum appears to be thriving and they have added on a new display space for World War II aircraft. 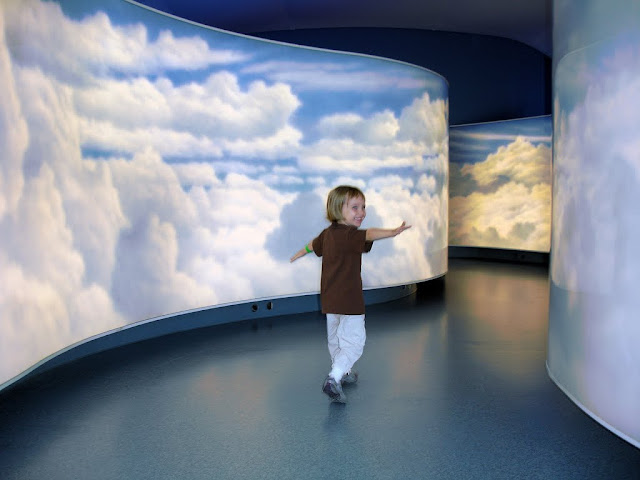 The Bear led the way through the cloud tunnel and into the museum proper. 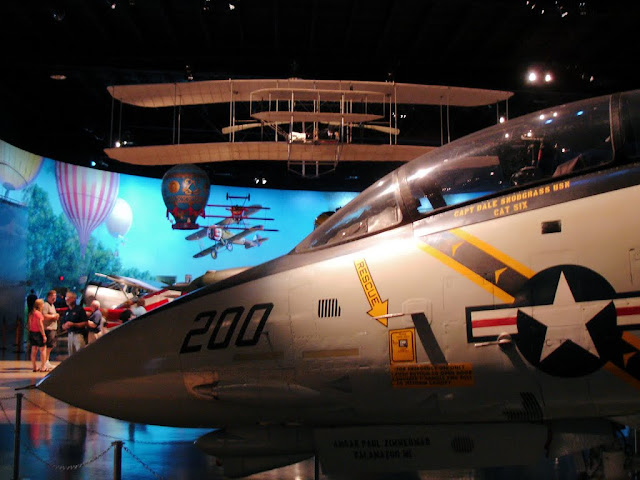 One thing I like about the Air Zoo collection is the perspective it provides on the first century of flight.  An exact scale replica of the 1903 Wright Flyer seems to soar over the museum's F-14 Tomcat. 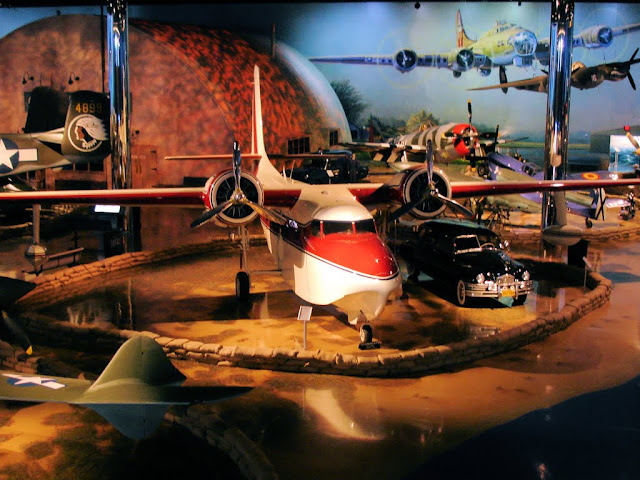 This Grumman Mallard is a classy addition made to the collection since I moved away from Kalamazoo. 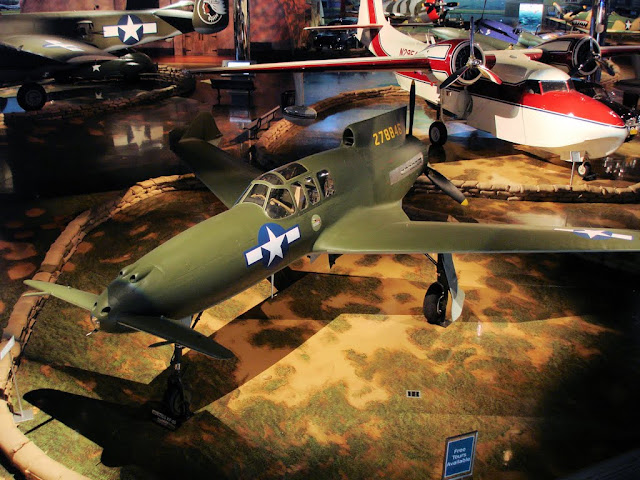 The one of a kind Curtiss XP-55 Ascender (Ass-Ender) is finally on display in the main building.  I remember when the aircraft first arrived from the Smithsonian years ago, dirty and in pieces. 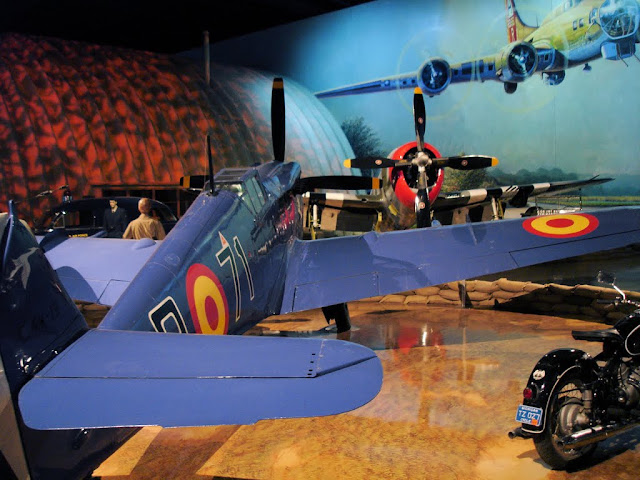 I like how these pseudo-adversaries are paired off.  The foreground aircraft is a Hispano Buchon, a Spanish version of the Bf-109 with a different engine (this one is right side up, making it easy to differentiate from the inverted inline German engines used by Messerschmidt).  In reality, the P-47 Thunderbolt would have fought against Bf-109s, not the Buchon.  Interestingly, this Buchon is a movie star.  It portrayed a Bf-109 in "The Battle of Britain". 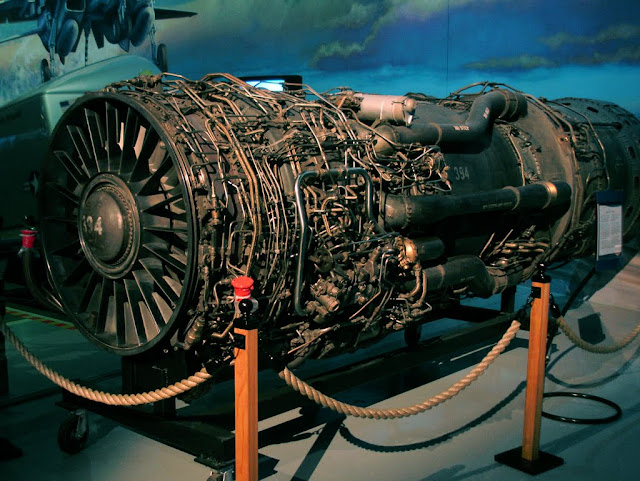 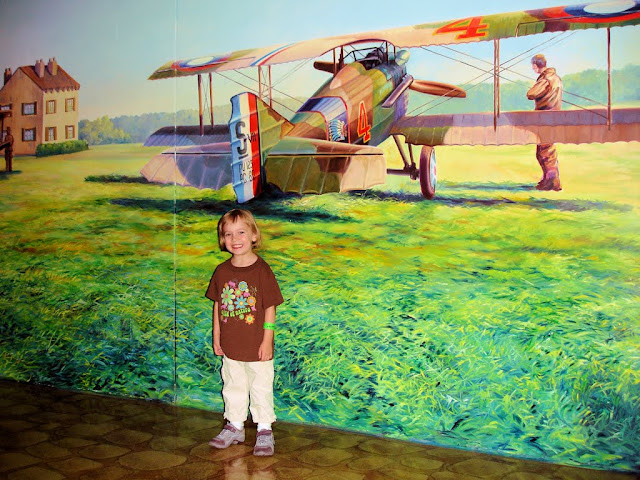 The Bear tries to blend in with the World War I scenes in Rick Herter's magnificent Century of Flight mural. 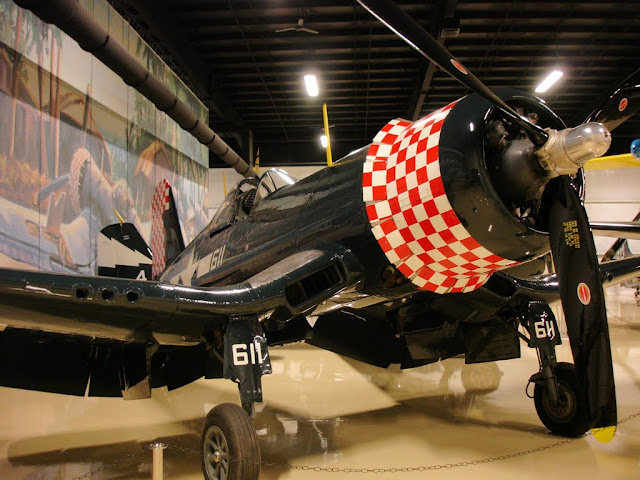 Stepping through a new doorway in the back of the main gallery leads to the new World War II hangar, where I came face to face with the Air Zoo's Corsair. 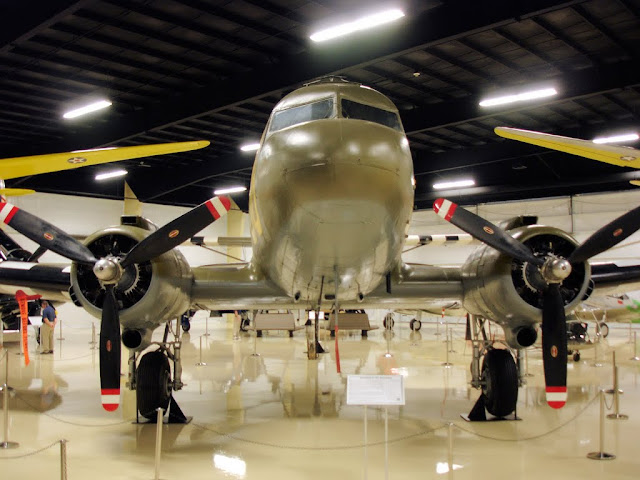 The space is dominated by the C47 Skytrain, arranged as though it was towing a CG-4A glider.  Years ago, I used to take kids into the airplane, have them snap imaginary static lines to the steel cable running along the ceiling, and talk about the terrifying prospect of leaping out of the airplane at night over war torn Europe.  Sadly, the C47 is no longer open to the public. 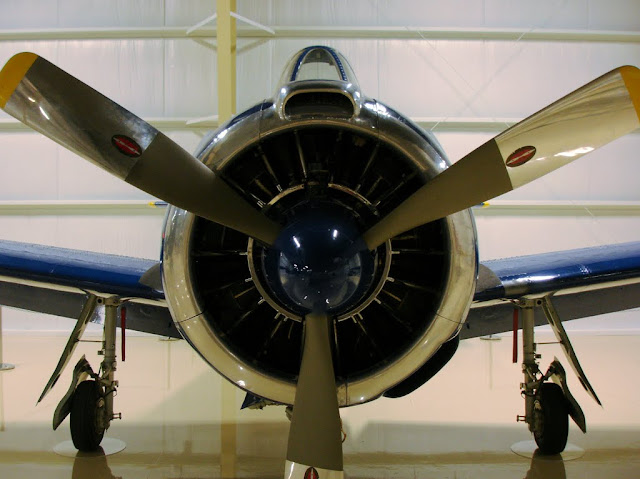 My old friend, the T-28 Trojan.  I still vividly remember than hot afternoon many summers ago when I went aloft in this awesome airplane. It's still painted up in the well-done, if inauthentic, Blue Angels paint scheme. 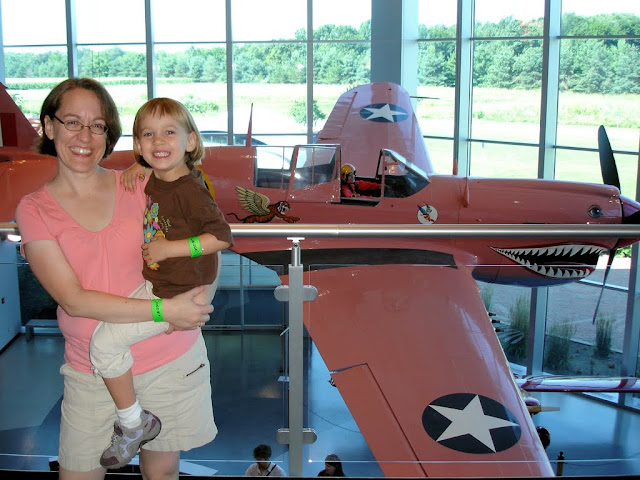 Every time we revisit the Air Zoo, we stop to pay our respects to Sue. 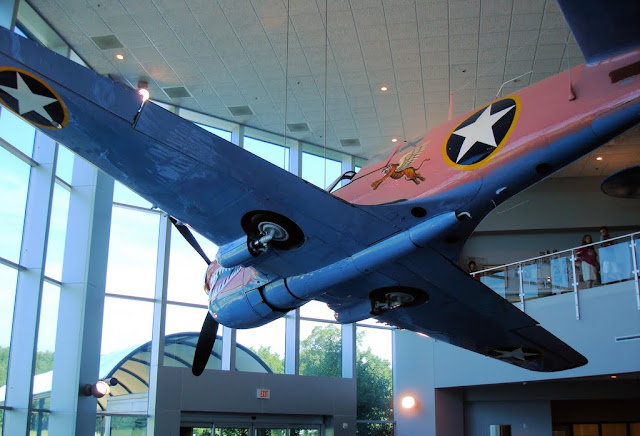 After three hours, a few rides, a scavenger hunt for The Bear, and a tour of unfinished display spaces coordinated by my friends, it was time to seek lunch.


It was time for our annual trip to southwest Michigan to visit our three favorite zoos: Air-, Binder Park-, and, of course, Kalama-. 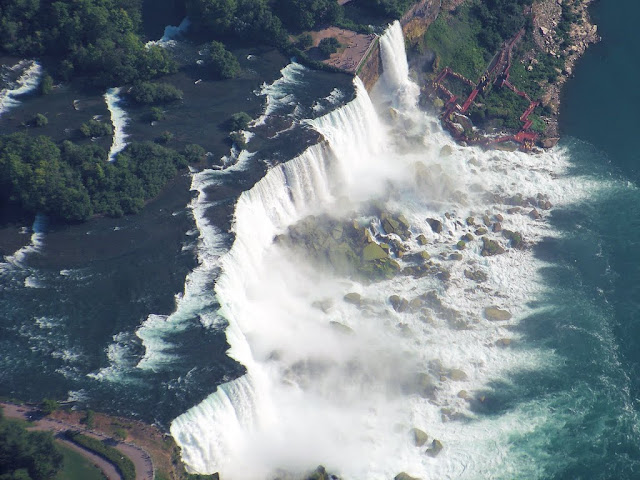 As always, we flew over Niagara Falls on the way.  The winds aloft were light (5 knots-ish) and out of the north such that, for once, our westward ground speed matched our true airspeed.  Without struggling against the typical westerly headwind, our passage over Canada was swift. 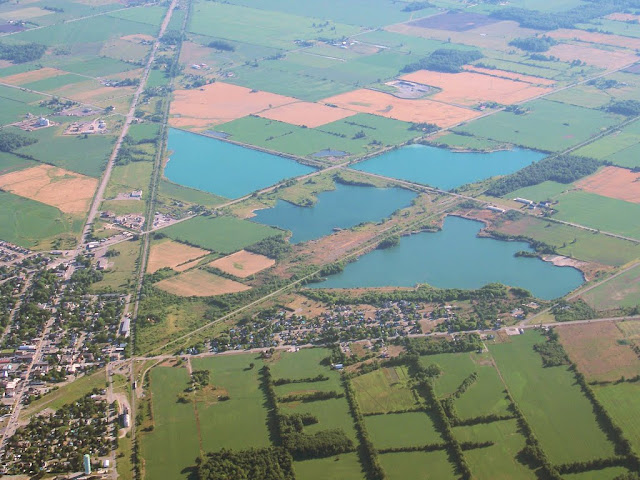 A colorful Ontario quilt flowed beneath us as we soared over Canada. 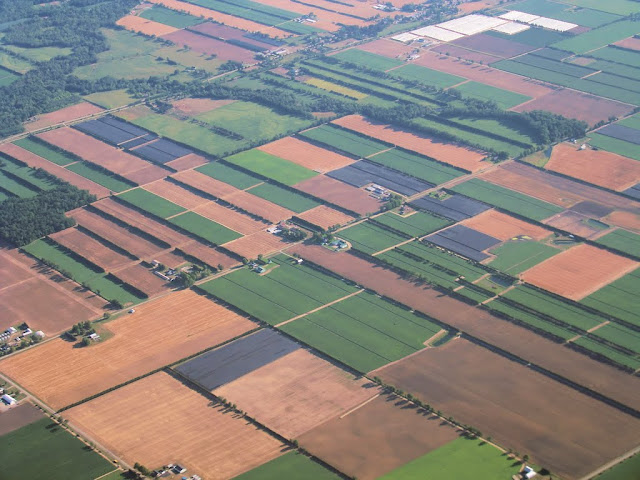 As the late afternoon sun transitioned toward dusk, field boundaries were enhanced by lengthening shadows. 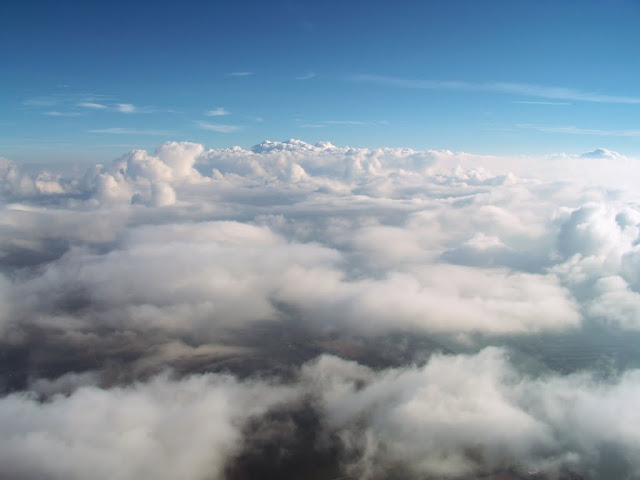 Although the New York and Canadian portions of the flight were under clear skies, southeast Michigan lay under a layer of clag with tops at 7000 feet.  However, we climbed above the clouds with assurances from automated reporting stations further along our route that the skies were clear in the middle of the state. 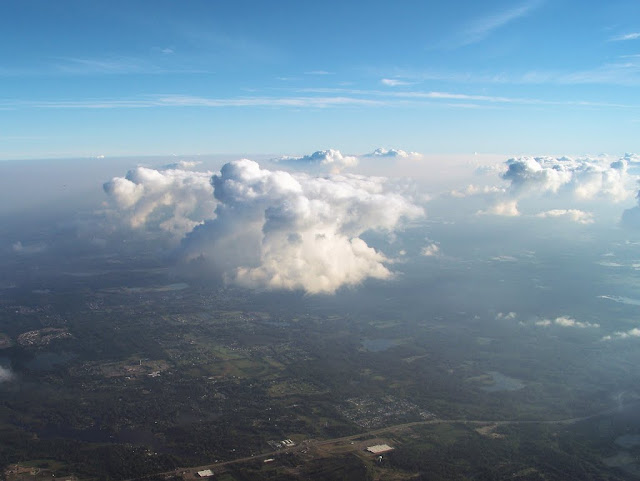 We flew directly over my home town, passing just north of Oakland County International Airport.   As we did, the clouds began to break up.  While flying over metropolitan Detroit, The Bear entertained herself spotting airliners en-route to Detroit Metro.  She is getting quite good at that. 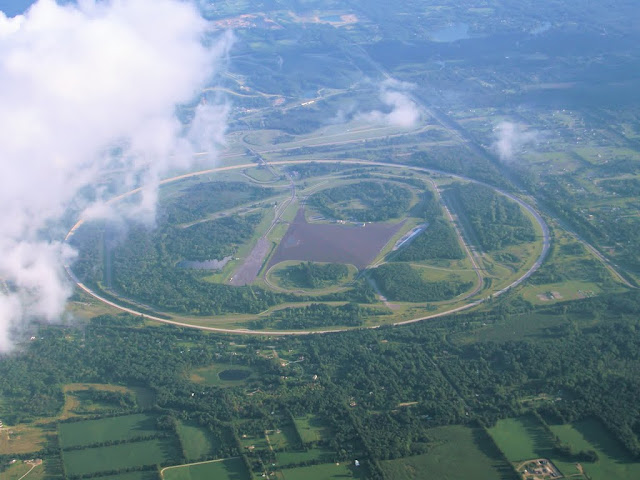 At 8500 feet and above the haze layer, we flew over the Milford Proving Grounds.

Still east of I-69, the Kalamazoo ATIS underwent an hourly update and the skies over Kalamazoo seemed to transform instantly from broken at 4000 feet (per forecast) to clear (decidedly better than forecast). 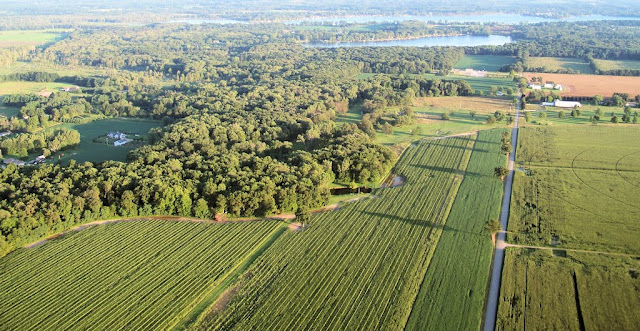 On approach into Kalamazoo, lush green fields were a welcome change from the water-deprived landscape of Upstate New York.  A familiar controller's voice rang in my headset as we were sequenced into the flow of landing traffic at Kalamazoo.

We parked at Duncan Aviation.  As always, the line staff were extremely helpful.  They brought our rental car directly to the airplane, handing me the keys with the admonishment to "please not drive on the taxiway".  There are still no landing, parking, or handling fees for single engine aircraft at Duncan-Kalamazoo.  What a great place to visit!


Across the field, a new control tower was under construction.  Of course, with the government's utter failure to fund the FAA, all work was on hold.

It was a wonderful trip.  We spent a morning at the Air Zoo (thanks, Tamra!) and an afternoon in Marge's pool (a highlight for The Bear, who should probably be renamed The Fish).  The Bear and I visited John at the Three Rivers Airport, who revealed to us that rumors of N3470R's demise were premature.  The Bear was delighted to stand on the wing walk of the rental Cherokee 180 in which I had done some of my early flying.  We spent another morning at the Binder Park Zoo, visited with a bunch of friends, and hit every favorite restaurant that we could think of (indeed, this was something of a prolonged $100 hamburger flight for me).

While eating breakfast with friends Sunday morning, the skies darkened.  A quick check of the weather radar via iPod (thank goodness Full City Cafe has wireless!) showed a storm on the shoreline of Lake Michigan and moving rapidly eastward.  We scrambled for the airport, stopping briefly to top off the gas in the Mercury Grand Marquis Land Barge that Enterprise had dropped off at Duncan for us (come on folks, I asked for a midsize).

We blasted out of Kalamazoo ahead of the storm and landed in Pontiac forty minutes later.  By the time we landed, it was raining in Kalamazoo, but the way home was clear.  We had lunch with my mom and grandparents.  Family-wise, this was a good move and an overdue visit between The Bear and her great-grandparents.  Aviation-wise, this was a mistake.  When we returned to the airport, convective activity was popping up all around us, along our route, and over home.  Particularly over home.  "VFR flight not recommended," the briefer needlessly commented.

We waited a couple of hours for the existing thunderstorm warnings to subside, only to have them replaced by more severe forecasts and bigger red blotches on the weather radar.  The thunderstorms were not spooling down, they were growing in intensity.

At 3:30 in the afternoon, I made the decision to rent a car and drive home.  For the first time ever, I abandoned Warrior 481 far away from home.  Seeing my concern, Doug at the Pontiac Air Center promised to pull it inside in the event of any severe storms.

I always bring our passports when we fly over Canada, so it was a simple matter to drive directly through Ontario to get home, approximately paralleling the route we would have flown.  The weather we saw from the ground validated my decision to stay out of the sky that evening.

We stopped briefly in Le Roy to retrieve my car, returned the rental at the Rochester airport, and reached home at 2:00 am.  We were all very tired.

So tired, in fact, that scheming to rescue Warrior 481 from Pontiac did not really begin in earnest until five hours later.
Logged by Chris on Thursday, August 04, 2011 5 comments: