I visited Warrior 481 on the Dansville ramp on May 3, 2020. It was my first time laying eyes on her in seven weeks, the longest she's been out of a hangar since I bought her. Personally, this has already been my longest hiatus from flying since 2004. Night and instrument currency lapsed at the end of April and my 90 day passenger carrying currency could lapse at the end of May for the first time since I earned my certificate eighteen years ago. I feel like such a slacker.

Discovery of engine gear train damage to Warrior 481 on March 20 inspired a long conversation with Ray about next steps. In Ray's opinion, there were two logical paths forward. Either go directly to overhaul because the engine had about 1900 hours on it since major overhaul or do additional troubleshooting of the gear train, replace the damaged gears, and continue flying the Warrior until engine condition necessitated an overhaul sometime in the future. My preference was the latter. I’ve absorbed enough of Mike Busch’s writing that I did not want to jump into an overhaul without a fight.

A risk to my preferred plan would be discovery of damage to the camshaft gear, which is integral to the camshaft. If that was damaged, the cam would need to come out. The only way to do that is to remove and split the engine. If such an invasive repair became necessary, then an overhaul for the engine would make sense.

When I bought Warrior 481, the engine had 60 hours on it since overhaul. The Lycoming O-320-D3G has a recommended time between overhauls (TBO) of 2,000 operating hours or 12 years, whichever comes first. I emphasize "recommended" because, as a private operator, I am not legally bound to do anything at TBO. As long as cylinder compressions are good and the engine is not shedding metal, I can continue to run it on condition. Although I know of private owners who fly often and have gotten 2500+ hours out of their O-320s, many privately owned aircraft fail to reach TBO because they are not active enough to fend off corrosion. I do not believe that Warrior 481's longevity will be limited by a lack of activity.

At 17 years and 1900 hours since major overhaul, it was my intention to run Warrior 481's engine past TBO. To me, going beyond TBO would have been an achievement signifying that I operated and cared for my engine well over the last sixteen years. We were on track for that until the events of March 7 brought going beyond TBO into question.

Thus, my preference was to fix the gear train and run the engine for a a couple more years before executing an overhaul as a planned activity from my home airport rather than the ramp at Dansville Municipal. However, I understood that if there was damage to the cam gear, the ensuing invasive repair would tip us over the edge toward an overhaul.

On April 7, a month after the impulse coupling disintegrated, Ray returned to Dansville and removed the right mag (the left was already long gone for obvious reasons) and the fuel, oil, and vacuum pumps to gain access to the accessory case. After inspecting the gear train, I received a blunt assessment from him by text: a thumbs down emoji.

With that, our path was set toward overhaul.

On a third trip to Dansville a week later, Ray removed Warrior 481's engine. We considered an engine swap, but nobody seemed to have any O-320-D3G engines ready anywhere. We are fortunate that Penn Yan Aero is within easy driving distance, one of the oldest and most-respected overhaul shops in the country. Both Ray and the Williamson Flying Club have an excellent relationship with them. Thus, a Penn Yan overhaul of my existing engine was the most expedient path forward.

Like many aircraft owners, I have maintained an engine fund in preparation for the day when an overhaul became necessary. In my case, the money was the easy part; my former employer ("UberCo") essentially paid for my overhaul back in 2006 when they severed me and I have maintained that money in a liquid state ever since as a combined emergency safety net and engine fund.

By April 29, Penn Yan had disassembled, cleaned, and inspected the engine. They discovered that the case and crankshaft were both no longer serviceable. Just like automotive brake rotors, these components can only be machined so many times before there is not enough metal left to do it again. Penn Yan had a serviceable case, but a used serviceable crankshaft could not be located. As a result, Warrior 481 will be sporting a brand new crank when she next takes to the sky. Between needing a different case, a new crankshaft, and the fact that my original components no longer have any core value, the cost of the overhaul increased by roughly 50% from what we expected.

While I am not happy about this, UberCo's severance package was generous enough that the extra cost is manageable. Because I am actively seeking silver linings, at least those 100 hour crankshaft bore inspections are done for good. I am also happy not to be flying behind a large bore turbocharged beast like a friend of mine whose overhaul will cost at least twice what mine will.

As Ray explained the case and crank issue to me, I realized that my engine would be coming back with new cylinders (w/ associated valves), a new crankshaft, a different case, and a different camshaft. There would not be much of the original engine left. Ray pointed out that the engine would return with the old data plate, thus perpetuating the original serial number of the power plant hung on Warrior 481 by the good folks in Vero Beach circa 1978. It would still be "my" engine on paper, but in reality would be an almost entirely new machine.

Though the oil sump will probably be original. So...there’s that.

While Penn Yan was disassembling my engine, I investigated the two FAA-certified electronic ignition solutions available on the market, the SureFly SIM (Surefly Ignition Module) and the Electroair. Although electronic ignition systems have been available on cars for decades, most piston aircraft still run on magnetos; just like my lawn mower. On the plus side, magnetos are not dependent on the aircraft electrical system to produce a spark. If the ship's alternator fails, the engine will continue running merrily along because the magnetos produce their own electricity. This can be a good thing because alternators do fail in flight. Ask me how I know. However, conventional mags also have moving parts that wear out and they use a fixed spark timing that is not optimal for all engine operating regimes. And, you know, sometimes impulse couplings fall apart and frag your entire engine. (Admittedly super rare, but when it happens to you...)


Based on features and cost, the SureFly made the most sense for Warrior 481. At this time, both the SureFly and the Electroair are only FAA-certified to replace one of the two conventional mags, thus avoiding electrical system loss as a single point of failure for the engine. By running a single electronic ignition system paired with a conventional mag, there is redundancy for a failure of either device. The SureFly SIM is generally maintenance free up to 2400 hours of operation (no more 500 hour inspections, need to change out points and rotors, bad coils that prevent engine start, etc) and produces a higher amplitude spark that reportedly aids in starting the engine and facilitating smooth operations. Despite being paired with a conventional mag using fixed timing, it is estimated that 80% of the fuel savings expected from variable timing can be realized. At a price that is roughly double that of a conventional mag, the savings in maintenance costs alone is expected to make the SureFly worth the cost of install.

When Mark overhauled the O-320 in his Citabria last fall, he had the SureFly installed. He initially approached Penn Yan about doing the job, but they refused to install it citing past instances of being burned by new technology. A lot can change in seven months, however, and when Ray asked about the Surefly, Penn Yan was not only willing to install it, but an official at the company was contemplating one for his personal airplane. That is a pretty good endorsement in my book.

When Warrior 481 takes to the sky next, it will be with a SureFly installed. While I think this is a very rational upgrade to make, it is also emotionally satisfying to eliminate the conventional impulse coupled mag that precipitated my current situation. 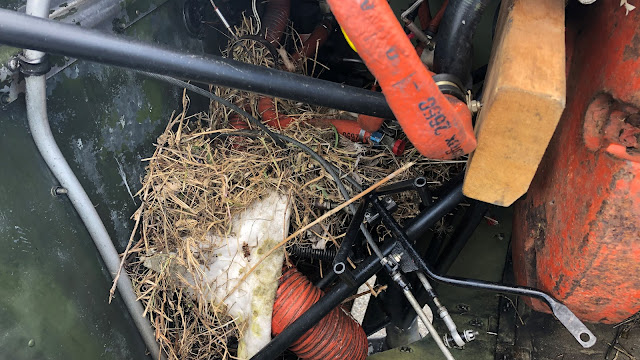 That brings us to the present, May 3. I found Warrior 481 tied down on the Dansville ramp performing an airplane version of Downward Facing Dog. Ray had deliberately flattened the nose strut in addition to adding a weight to the empty engine compartment to keep the Warrior from rocking back on her tail while the engine was missing.

Despite Ray's valiant effort in plugging all the holes in the cowl and tail cone, birds were still getting into the now vacant engine compartment (above). I removed handfuls of nesting material from my airplane and plugged the remaining hole around the nose strut (visible above) with towels. I came prepared for this. Club members Lee and Alan checked on my airplane a week earlier and pulled a lot of nesting material out of the cowling then, too. Those little buggers are aggressive this time of year (the birds, not Lee and Alan).

I also observed that the cabin cover was not quite properly attached, so I redid the cover. With the wind gusting up to 29 knots, this was a solo task that required a lot of patience, but I eventually got it done. 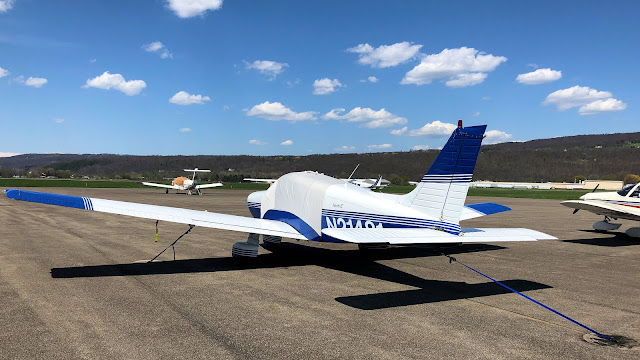 Before I finished, a Cherokee 140 bearing the number "42" from a previous Air Race Classic landed and parked nearby. As I walked off the ramp toward my car, I greeted the pilot and her husband.

"You're missing a propeller," she challenged.

"Well, that's not all I'm missing." I explained the situation. After wishing my new friends a good day, I realized that it was my first face to face conversation with someone outside of my own household in several weeks since social distancing measures were implemented in early March.

With the airplane parked at Dansville Municipal, the engine at Penn Yan, and the propeller and other engine accessories safely back in Sodus, I have major portions of my airplane scattered across three counties in New York. That is an odd feeling to say the least.

I am looking forward to the airplane coming back together and returning home from Dansville. The current best estimate for timing with Penn Yan is the end of May. The airplane also goes out of annual at the end of May and that might require Ray to do a remote annual inspection to maintain airworthiness.

In the meantime, we are still waiting on final word from Champion about what financial assistance they will provide given that their defective component precipitated this mess.

Airplane ownership has been, for the most part, an absolute joy over the last sixteen years. I have high hopes that it will be so again before too much longer. Maybe by the time Warrior 481 comes home, there will be places available to fly to again.
Logged by Chris on Sunday, May 03, 2020 2 comments: