A break in the weather inspired a quick trip into the air. Aloft, I could see a small number of isolated snow showers scattered around the area; dense enough to occlude visibility, sparse enough not to register in datalink radar imagery. 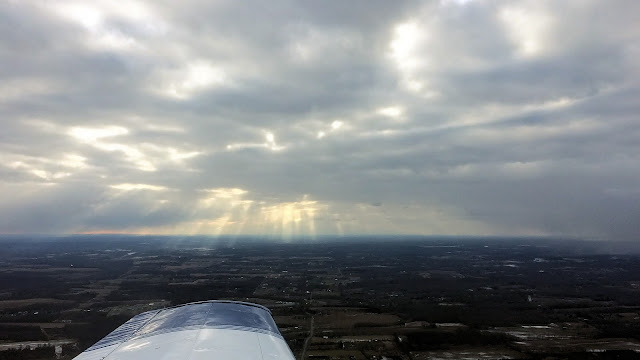 They're too far away to matter, I thought to myself as I surveyed the local area on climbout. I would soon learn that I am not as good a judge of these things as I considered myself to be.

A short flight to Canandaigua brought the oil to temperature and I made a couple of well-executed crosswind landings on runway 31. Turning back on course for the Williamson-Sodus Airport, I suspected trouble when a distant snow shower obscured the portion of the Lake Ontario shoreline where the airport was.

From five miles west of the airport, I could see the runway, but visibility on the downwind and final approach legs of the traffic pattern was compromised by snow. I was VFR and, until the weather lumbered off to the east, I would not be able land at Sodus unless I wanted to fly straight in to runway 10 with a significant tailwind. Unsurprisingly, I didn't. I could have loitered in the area until the weather moved out of the way, but it was not clear how long I would need to wait. 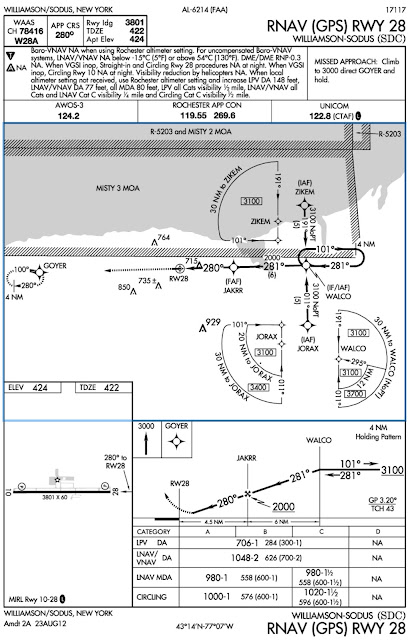 An instrument approach would be easy, however. Cloud bases were above the highest minimum altitudes for the RNAV-28 approach procedure (3100'). That would keep me out of the ice. The air was cold; well below freezing and I was not worried about snow sticking to the airframe.

Instrument flight is usually a premeditated activity that is carefully outlined and filed in an IFR flight plan before ever leaving the ground. However, because weather is known for throwing curve balls, pilots can request so-called "pop-up" IFR clearances from approach controllers that bypass the need to file a full IFR flight plan with Flight Service. Instead, an approach controller can grant a pop-up IFR with minimal information from the pilot. Pop-up IFR clearances are intended for exactly the situation I faced: I was VFR, fully IFR capable and current, virtually at my destination, and facing a bit of weather blocking the path to safe harbor.

I had never obtained a pop-up IFR clearance before, but this appeared to be a perfect opportunity to try. I pinged Rochester Approach to get their attention and, once I had it, gave my spiel.

"Cherokee Four Eight One, squawk 0301 and ident. What approach do you want?"

Wow. That was easy.

Ahead, haze in the windscreen hinted that the diffuse edge of the weather was near.

"Cherokee Four Eight One, cross JORAX at or above 3,100. Cleared RNAV 28 Williamson Sodus."

Awesome, I thought. I'm all set. I activated the pitot heat in anticipation of penetrating weather and ran the "approach to landing" checklist.

I was about to enter the weather when Rochester called again.

"Four Eight One, I forgot to give you your clearance. Cleared to the Williamson Sodus Airport via radar vectors, maintain 3,100 until established."

This caught me off-guard because she had already cleared me for the approach, but I later realized that clearances require a clearance limit (in this case, the Williamson Sodus Airport) and that I had not previously received one.

"Cleared to Williamson Sodus via radar vectors, 3,100 until established," I read back. I got my clearance just in time. Moments after I released the push-to-talk button, the Warrior and I were engulfed in snow and visibility dropped to zero. This was a different sort of zero visibility than my previous experience. Unlike being enveloped in the uniform gray mass of a cloud, the visibility was cut by a myriad of off-white particles streaming past the windows. They formed a dynamic, pixelated fog with each element perfectly aligned with the relative wind.

I intercepted JORAX and flew the approach procedure. It was my first time in actual instrument conditions with the Garmin G5, but the electronic attitude indicator was now so familiar that I barely registered its novelty.

Periodically, I checked the leading edges of the wings for accumulation, but never observed any. I emerged from the weather on final approach two miles east of the runway threshold, cancelled IFR in the air with Rochester Approach, and squeaked the airplane onto runway 28.

As I pushed the Warrior back into the hangar, I felt a strong sense of satisfaction in the availability of a new-to-me tool to manage flight safety. Having successfully exercised this privilege once, I would be more comfortable invoking it in the future as appropriate.

Considering that the controller initially forgot to provide a full clearance to me, I also think that the exercise was a learning experience for us both.
Logged by Chris on Saturday, April 07, 2018 4 comments: Links to this post