"Even on fine days Rochester demands alertness because clear weather brings out the small training planes of which Rochester has an uncommon share."
-- Ernest K. Gann, Fate is the Hunter

Well-fed from a lunch stop in Dansville, I decided to fly into Rochester for some pattern work under the watchful eye of the tower.  Because I do not visit towered airports routinely, I fly in to Rochester from time to time just to stay practiced.  Well, more accurately, to keep my ear practiced.  Fortunately, the Rochester airport has a tradition of flight training established long before the word "International" was tacked onto its name; controllers there are very accommodating of training aircraft.

After my first "touch and go", I was invited to continue my efforts in right traffic for runway 28.  To my delight, all four trips around the pattern were accomplished without embarrassing myself on the radio.  Flying in the terminal environment of a moderately busy airport has a different look and feel than soaring around "the patch" at a little airport like Le Roy.  Fortunately, a few of my blind camera shots out the Warrior's windows actually show some of those differences. 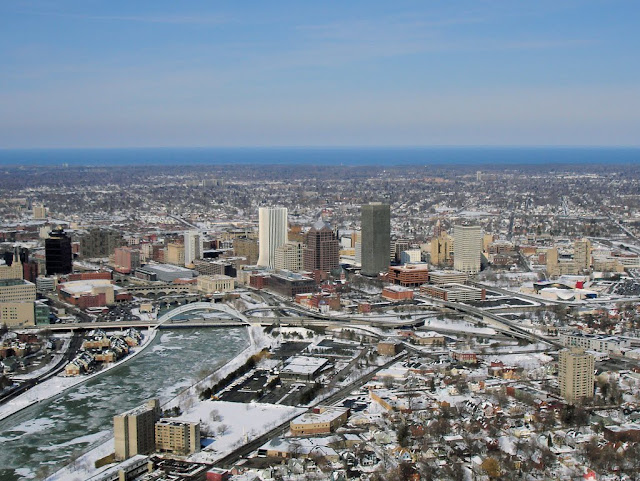 I was on right downwind for runway 28, abeam the numbers, when the tower controller asked if I could make an immediate turn to the runway.  He had a Cessna waiting to depart and more traffic inbound and was hoping to get me in ahead of both.  I responded that I could expedite, throttled back, dropped flaps, and executed a slipping turn directly toward the runway threshold.  As I did so, I was reminded of the little squeak my wife made in a rented Cherokee when the controller at Jackson, MI asked me to do the same maneuver.
I had already lost 300 feet of altitude when the controller called back.  "Warrior 481, belay that.  I've got a Canadair regional jet on four mile final.  Extend your downwind and look for him at your one o' clock."  I added power, raised flaps, acknowledged the controller, and climbed back into an extended downwind leg.  Ahead, a tiny black dot was growing rapidly.
"Warrior 481 has the regional jet on final," I informed the tower.  Within moments, it had transformed from a dot to a tangible airplane passing beyond my wingtip.  As the jet passed, the tower called again.
"Warrior 481, cleared touch and go runway 28, behind the regional jet.  Caution, wake turbulence."  By issuing the caution, air traffic control transferred responsibility to me should I blunder through the jet's invisible wake.  Wake turbulence is not much of an issue at the Le Roy  airport (there are not a lot of heavies that visit Le Roy's 2600' long runway) and I paused for a moment to contemplate how closely I wanted to follow the jet.  I extended my downwind a bit farther, enjoying my unusual proximity to downtown Rochester (above).
Turning final, I watched the regional jet clear the runway.  The Cessna was still holding on the taxiway, first in line for runway 28 in front of two enormous plow trucks.
"Warrior 481, I have another aircraft on final for runway 22.  Do a right 360 for spacing and notify when re-established on the final approach path."  This is how I found myself maneuvering in a circle 800 feet above the University of Rochester campus.
In the time it took to complete the turn, the jet traffic on 22 landed and the Cessna was finally cleared to depart. At this point, any concerns over wake turbulence from the Canadair jet were beyond moot.  I could not help but smile to myself.  I had ventured into Rochester Class Charlie looking for a refresher course in organized chaos.  I did not leave disappointed. 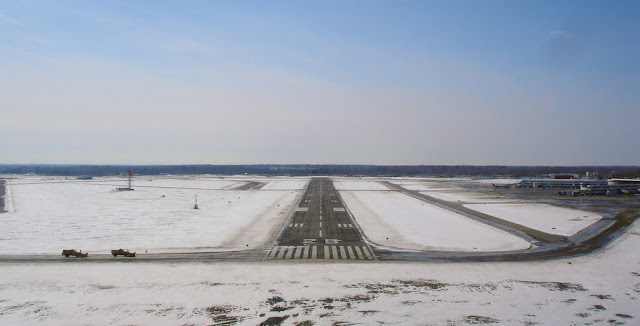 Final approach for Runway 28 with a plow truck apparently holding short for take off.  It may appear that I am on short final for a relatively small runway.  Don't be fooled; this runway is 5500' long and 150' wide. 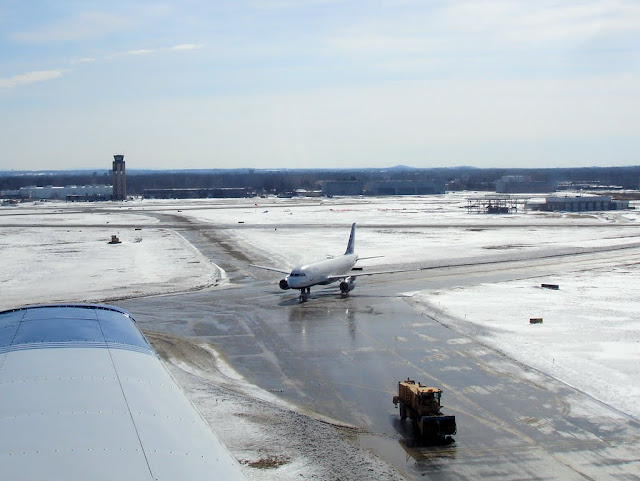 Departing runway 28 at Rochester.  I have no idea what kind of jet this is.  I just enjoyed going faster than one for a change. 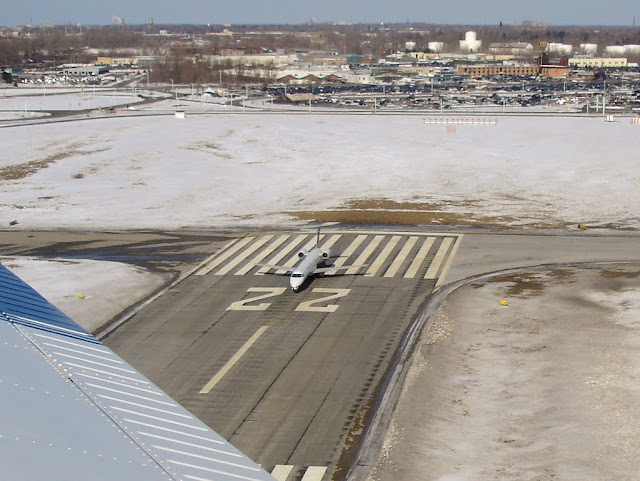 This jet holding in position on the end of runway 22 had to wait for me to finish my touch and go before the tower cleared it for takeoff.  Right after I captured this lucky shot, I was given a new transponder code, switched to the departure controller, and turned on course for Le Roy.  I may have delayed this regional jet's departure for a moment, but it soon left me in the proverbial dust.

Rochester Class Charlie airspace ends about five miles northeast of Le Roy.  The controller was busy as I cleared his airspace and I was unable to request a frequency change.  Finally, I heard "Warrior 481, radar services terminated, squawk VFR, frequency change approved.  No traffic observed between you and the Le Roy airport."  Interestingly, I was already directly over the airport when I received this information.  I sure hoped he was correct.
Logged by Chris on Sunday, March 02, 2008 No comments: