Chimera
Me: "I flew to Indiana, Pennsylvania today!"
The Bear (in deadpan): "That's stupid."
Happy New Year
My first flight of 2023 took place mid-January, delayed by poor weather and one of the worst bouts with the flu I have ever experienced. With January 16 promising clear, benign weather, I set to work on a plan to explore some new destinations. I ultimately settled on a round robin flight from Sodus to Indiana County/Jimmy Stewart Airport (KIDI) for breakfast at the Riziki Cafe, a hop to Slatington (69N) near Allentown for some hiking, on to Pocono Mountains Regional (KMPO) for a late lunch at Mamma Maria's Pizza, then back to Sodus. It would be a full day involving exploration of three new airports.
All did not go quite as planned.
VFR at 6,500 feet, the air was cold, clear, and calm with a vista below that was inspiring despite being visibly encrusted with ice. 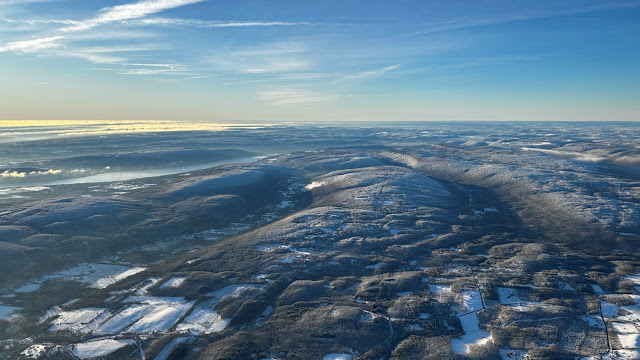 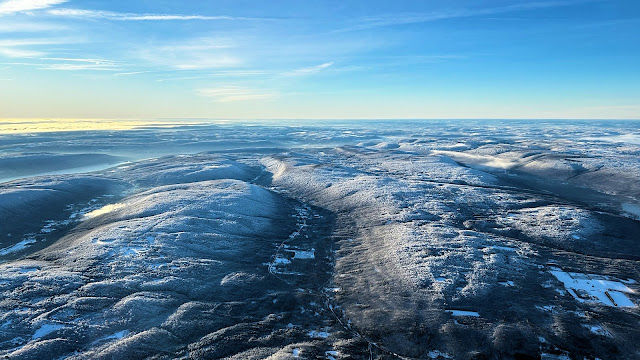 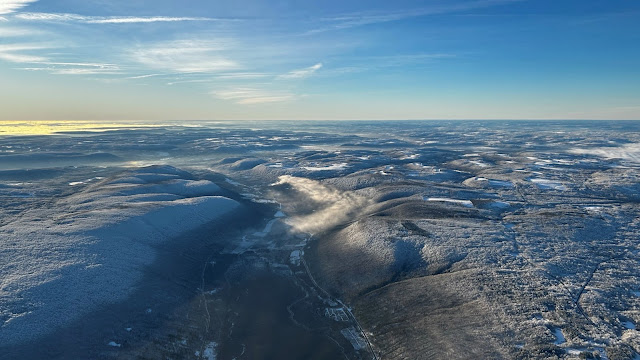 I was struck by the distinctive frost line above a particular elevation. 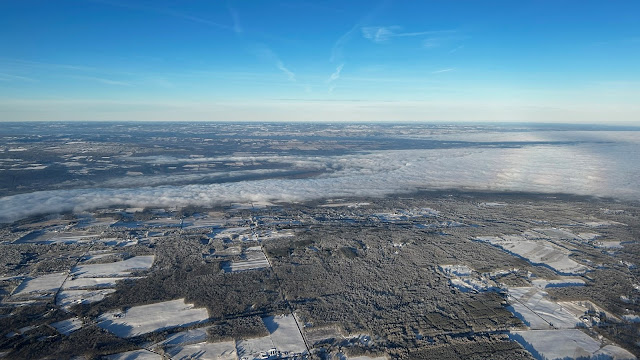 Warrior 481 cast a massive, diffuse glory on a distant deck of clouds as I sped southwest bound over New York. 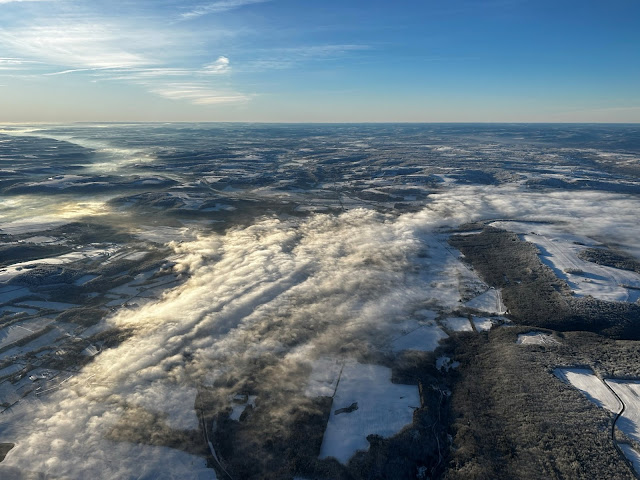 A mild tailwind pushed my groundspeed to between 140 and 150 knots (161-173 mph). With the day representing a break in a stretch of crummy weather, I was surprised by the lack of radio chatter. Aside from airliners, all ATC frequencies were silent. On the bright side, there were also no Guard Trolls lurking on 121.5. 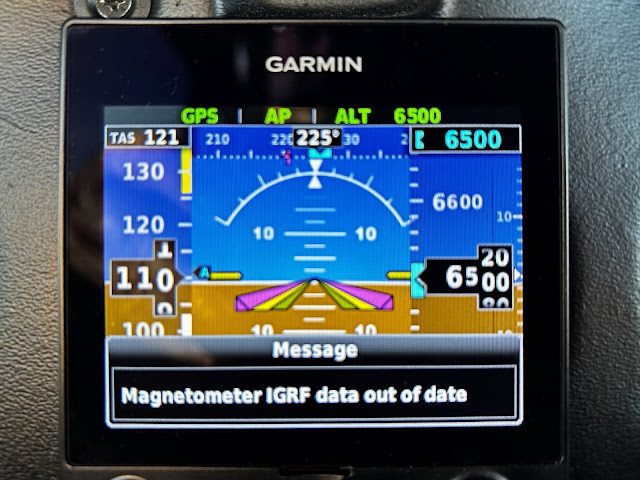 When Warrior 481's avionics booted up that morning, the upper G5 display flashed a message notification, something I had never seen before. Once accessed, the message informed me that my "magnetometer IGRF data" were out of date.
IGRF stands for "International Geomagnetic Reference Field" and it is a mathematical model of the Earth's magnetic field that is used in concert with an installed magnetometer to display magnetic heading on my airplane's electronic flight displays. The model is updated every five years and mine was evidently due. I suspect that flying IFR in this expired condition would have been an airworthiness issue, but I was going VFR and still had a fully functional magnetic compass on board. Somehow, it pointed the right way without assistance from a complex mathematical model.
I texted the above image to Jake, who told me to stop in anytime and that the update would require just a few moments of his time.
It's a Wonderful Life...in Indiana, PA 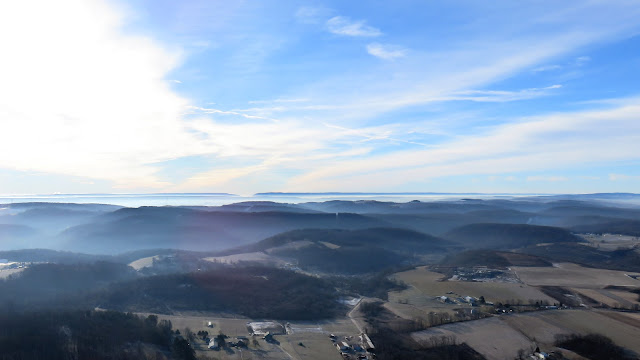 Light haze clung to the hilltops as I descended toward Indiana County/Jimmy Stewart Airport (airport #251). In the distance, the collection of stacks and cooling towers of the Homer City Generating Station added to the hazy ambiance. 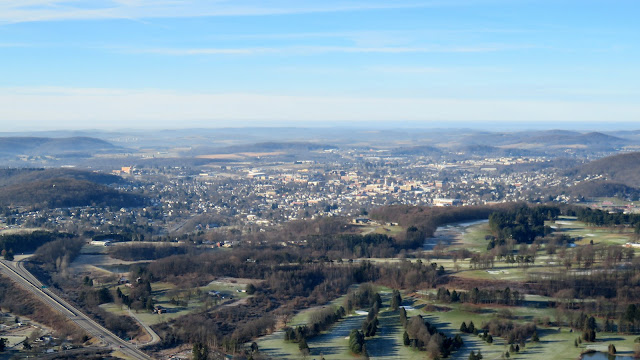 Pennsylvania, Indiana is famously the home of actor Jimmy Stewart as well as the Indiana University of Pennsylvania. In The Bear's words, "That's just confusing!" 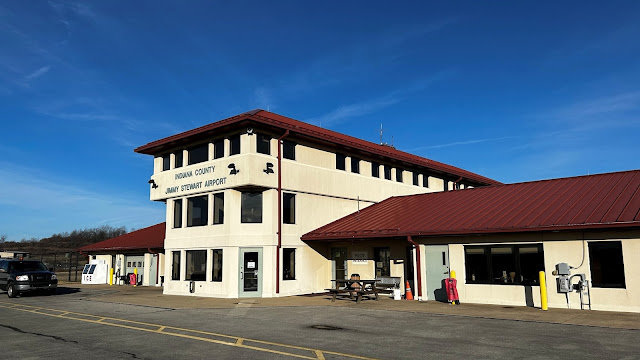 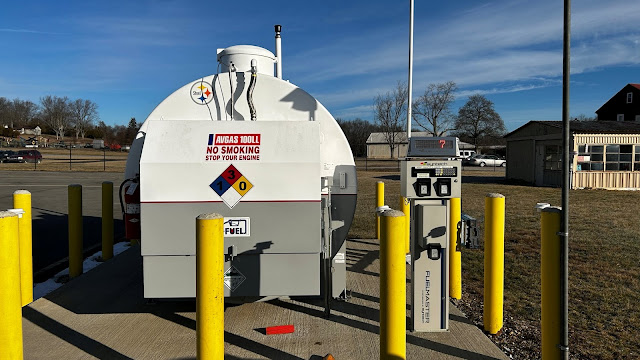 I was initially perplexed by the fuel farm because I could not find the fuel hose immediately. 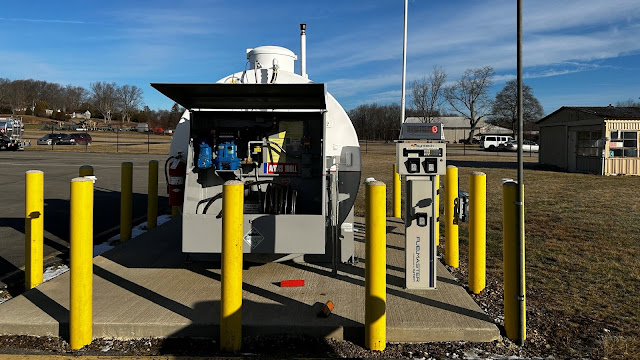 Oh! There it is! It was a nice setup, though I had never seen one quite like it before.
Inside, the terminal, I met Ross (or was it Russ?) who welcomed me to the airport, showed me the lay of the land, and introduced me to Sheena who was working the counter at the Riziki Cafe (tagline: Percolating Hope Through Coffee). 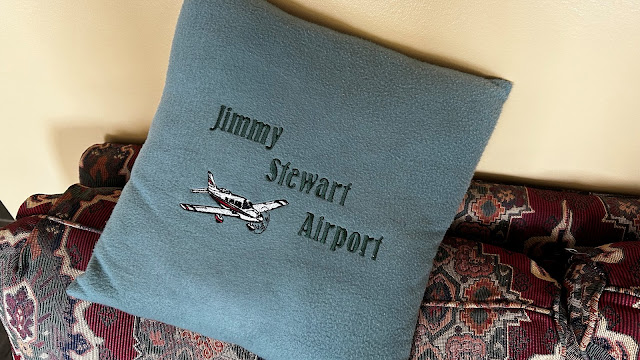 Imagine leaving such a mark on the world that people want to embroider your name on throw pillows! 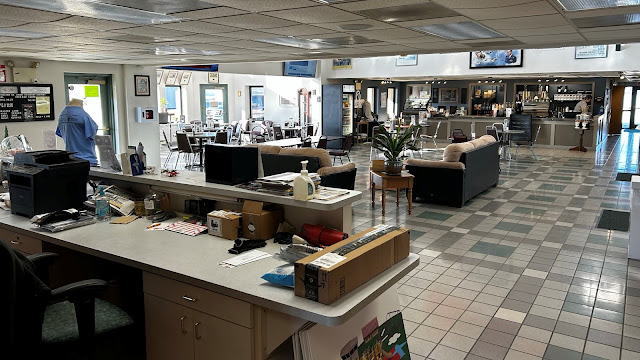 The main terminal was a large, open space with the FBO counter on one side and the Riziki Cafe counter on the other. In between was a high-ceilinged space with both casual seating and tables and chairs for the cafe. I ordered a veggie omelet with mushrooms, spinach, salsa, and pepper jack cheese. Everyone was very friendly and my breakfast was excellent, right down to the side of perfectly toasted sourdough. 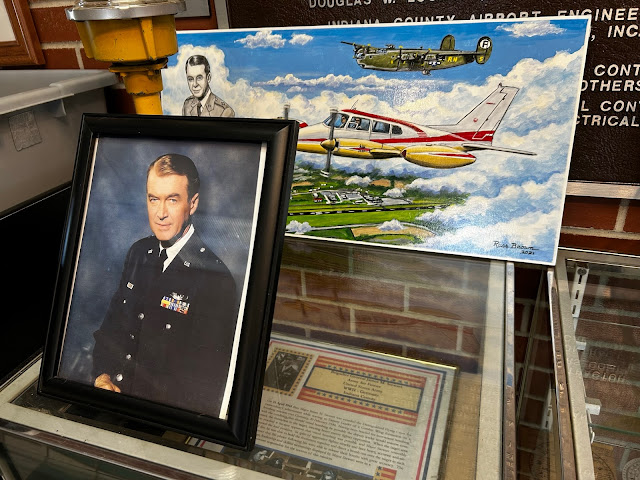 As I waited for my breakfast, I read over a small display about Jimmy Stewart. To be fair, I knew very little about the famous actor. I have never seen It's a Wonderful Life, Rear Window, Mr. Smith Goes To Washington, or any of his other classic films. Up until that moment, the most I knew about Jimmy Stewart came from a 1991 Jim Carrey impression of the actor facing mortality. "Hi Mr. Death. You look like you could use some soup." (Stewart did voiceover work on Campbell's Soup advertisements around the time I graduated from high school.)
I did not know that Stewart was a pilot, nor that he earned a Distinguished Flying Cross while at the helm of a B-24 Liberator bomber over Europe. He was the first Hollywood leading man to enlist in the Army during World War II and rose quickly through the ranks from private to colonel in four brief years, ultimately retiring from the United States Air Force as a Brigadier General. He was clearly an interesting man and it is probably not surprising that the Jimmy Stewart Museum a few miles away comes highly recommended to visitors. 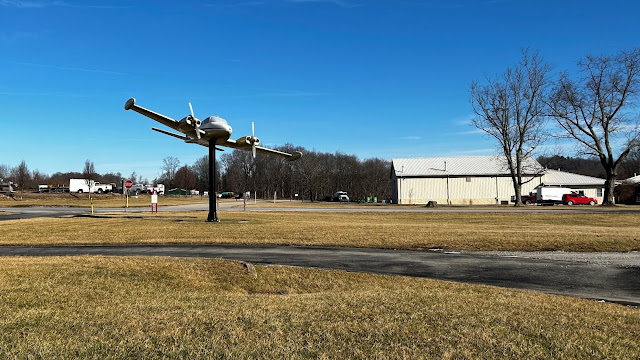 A long lost Cessna 310 once belonging to Jimmy Stewart has been located, restored, and now serves as both a profoundly relevant gate guardian for the airport and as a highly unusual weathervane. 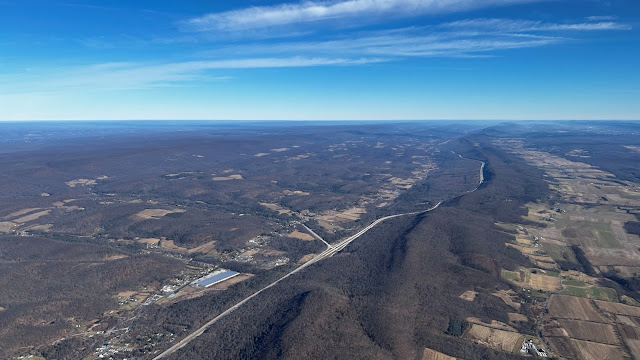 The next leg was the longest of the day, flying due east across Pennsylvania toward Allentown and Slatington Airport. I first learned about Slatington from my friend Scott who talked about the extensive trail system for hiking and biking that is accessible from the airport. The field itself lies along the west bank of the Lehigh River and features a relatively short paved runway surrounded on all sides by trees. It seemed like it would be an interesting place to visit.

While monitoring weather via ADS-B, it became clear that the wind was increasing and becoming gusty near my destination. Graphical AIRMETs for turbulence and wind shear appeared over eastern Pennsylvania with Slatington and Pocono Mountains Regional included in their orange perimeters.


Flying over the ridges of Pennsylvania at 5,500 feet, I was already subject to gentle mountain wave activity. In the descent toward Slatington, the turbulence increased significantly. At one point, the Warrior rolled abruptly to the right and I had to hold full left aileron for a sustained period of time to keep the airplane level.
As my first flight instructor once said, "We could do it, but it wouldn't be any fun." Between wind and the small unfamiliar airport surrounded by multiple obstructions, I decided that a visit to Slatington was best deferred. I climbed back into smooth air and notified Allentown Approach that I was diverting northward. Wind at Pocono Mountains Regional was gusting over 30 knots. Nothing about landing at either place seemed like it would be particularly fun, so I "noped" out of there. 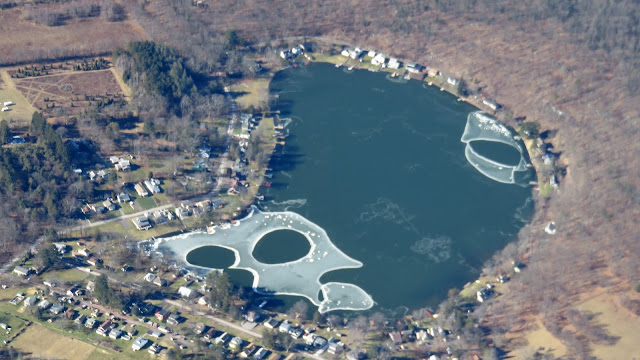 Proceeding northbound -- slowly against a headwind -- I turned my thoughts toward finding lunch along the way. Bradford County Airport (N27) in Towanda, PA was an obvious solution to the problem. It was near my route of flight and there is reputedly a decent diner within walking distance of the field that I have not visited before. In fact, my only previous landing at N27 in May of 2012 included an altercation with a local pilot that irrationally shrieked at me for taxiing "too close" to his beater Cessna 172 while it was blocking a taxiway to the ramp. I've harbored a negative bias toward the airport ever since.
Wooden Gull
The Bradford County airport sits in a bowl and remained invisible to me until I was less than five miles away. Calmer wind prevailed than what I encountered near Allentown and I landed with minimal tooth rattling. The airport was reconfigured since my first visit a decade prior, with the avgas fuel pump relocated to the western ramp and positioned such that aircraft taking on fuel could not block access to the ramp. 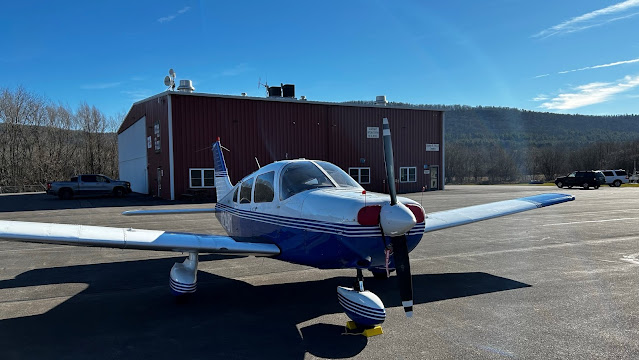 I entered the terminal building hoping for a pointer to the diner. I encountered Bob in the maintenance hangar who was happy to provide directions. "But first, can you tell me about that Corsair-looking aircraft in the corner?" I asked him. 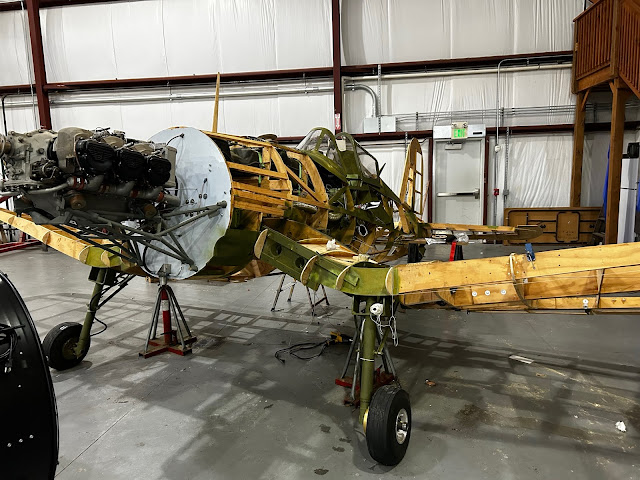 As it turned out, I was speaking to the designer and builder of the wooden Corsair. It was unmistakably Corsair-shaped and featured the inverted gull wing made famous by the World War II fighter. Bob walked me through some of the next steps and showed me his latest addition, actuators for the segmented flaps on the tailing edge of the wing. It struck me as a very ambitious project. 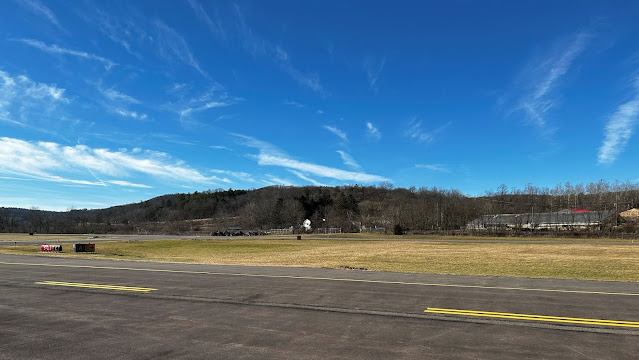 Bob directed me to walk across the runway at taxiway Charlie and exit the property through an open vehicle gate. The diner, Sparks Family Restaurant, was a brief stroll beyond the gate. It was a rustic roadside establishment, but the people were friendly and the food wholly adequate.
When I returned to my airplane, a younger bearded fellow climbed out of a beautiful Stinson 108 and introduced himself to me. "I didn't recognize your airplane and wanted to meet you before you left. I'm Scott, the airport manager." We shook hands and chatted briefly before parting to take our respective aircraft airborne.
Between the friendliness of Bob and Scott, the quality of the airport facility, and the availability of nearby food served with a smile, Bradford County Airport is completely redeemed in my eyes after that negative experience during the previous decade.
Software Update
Climbing away from Bradford County behind the Stinson, I contacted Binghamton Approach for flight following to Genesee County Airport where Jake would do the software upgrade required to fix my out of date IGRF issue. I am sure that the notion of software upgrades for airplanes would have absolutely befuddled the original designers and builders of Warrior 481.
Exiting the area to the northwest, I passed Dan inbound for Bradford in One Delta Tango. Sparks Family Restaurant certainly got an unusual share of Williamson Flying Club patronage that day.
Within twenty minutes of shutting down on the ramp in front of Boshart Enterprises, I departed for home. Jake was as timely as promised and I spent more time chatting with him than he required to actually perform the update. After discussing odd radio issues I experienced in 2022, we shook hands and parted ways.
Lakeshore "Drive"
Rather than the direct route home over Rochester, I chose to fly north and follow the lakeshore to Sodus. 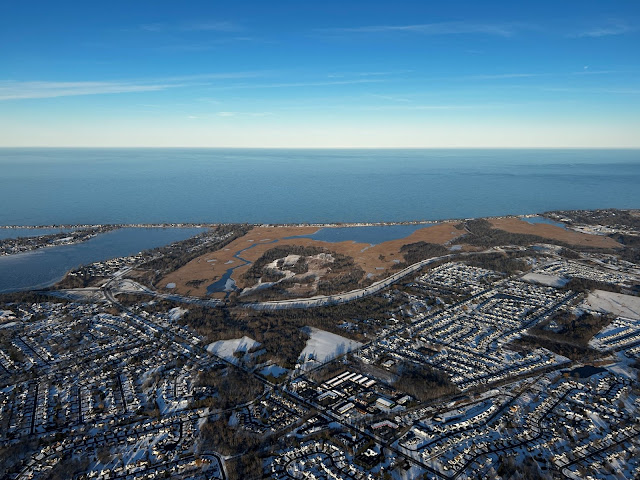 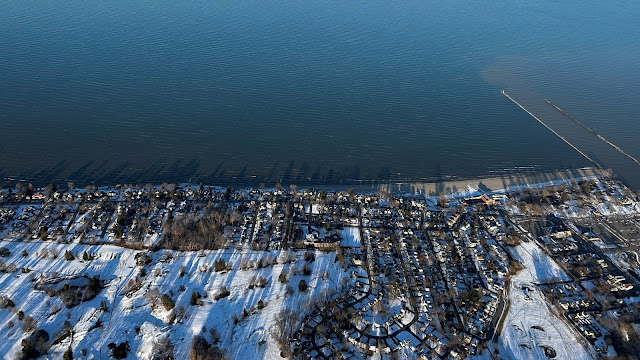 It was a full day of flying and, as I made my way home along the Lake Ontario shore, shadows were lengthening significantly.
Back at Sodus, I was met on the ground by Ed, Dan, Scott, and Randy, all of whom were taking advantage of the beautiful day for some altitude therapy. All of us know that it is foolish to squander a good flying day in January. One never can say when the next will come along. Even though my good flying day did not go quite as planned, it was still an enjoyable day of exploring new and kind-of-new places.
Logged by Chris on Monday, January 16, 2023 No comments:

Chris
Welcome to my Photographic Logbook, a visual chronicle of my experiences as a private pilot.