2011 in Review: Year of the Cross Country

With 2011 nearly over, it's time to reflect back on the year's flying and share some of my favorite images from the logbook.


I spent 79.6 hours engaged in cross country flying in 2011 (defined for these purposes as landings at airports greater than 50 nautical miles straight line distance from the point of departure).  This is the most cross-country flying I've ever done in a year.

When I first bought my airplane, I used to make A LOT of 1 hour flights.  Over time, it seems as though the frequency has decreased while the duration has increased.  So, not surprisingly, the number of take-offs and landings per hour flown is considerably lower than past years (down from a six year average of 1.8 to 1.2).

For me, the top three trips of the year were:

1.  Family cross country flight to Florida ("A Bear's Odyssey").  This is the longest aerial voyage I have made to date and it was made all the more wonderful by having my family along with me.


2.  Pilgrimage to the Wright Brothers Memorial in North Carolina ("The Pilgramage That Almost Wasn't") in celebration of surpassing 10 years since my first solo and reaching 1000 hours.  At 9.6 hours, it was also the most flying I had ever done in a single day.  Remarkably, I completed the trip without a trace of fatigue.

I had the pleasure of flying with twenty-two non-aviators outside of my immediate family, half of them kids.  A few of them had flown with me previously, but for many, it was a first flight in a general aviation aircraft.  Thanks to Kasia, Dan P., Greg, Chuck, Haley, Natalie, Bill, Stacey, Devon, Dan S., Rachel, Liya, Laura (from France), Kent, Ellie, Ben, Jay, John, Jack, Sara, Kate, and Laura for flying with me in 2011!

2011 was also a big year for The Bear.  In the course of logging 41.4 hours, she took her longest journey ever in the Warrior (Le Roy, NY to Ft Myers, FL, "A Bear's Odyssey"), graduated to flying right seat without Kristy around as support crew ("New Copilot"), and experienced her first night flight.  She explored 21 different airports in 10 different states.


I logged a total of 7.3 hours at night, the most I have ever spent aloft after sunset.

We established a new southernmost point of landing on Marathon Key (MTH).  By the end of 2011, I had landed at a total of 131 airports, cumulatively speaking.

I landed Warrior 481 at airports in Florida, Georgia, Kentucky, Michigan, New York, North Carolina, Pennsylvania, South Carolina, Tennessee, Virginia, and West Virginia.  2011 was our first year in either of the Carolinas.

I explored some new sights in states that I had never visited before...

...and visited some old favorites close to home.

I was invited by a friendly air traffic controller to fly directly through the center of one of the busiest Bravo airspaces in the world at 4500 feet.  And it was good.

For me, my humble little airplane is the perfect platform from which to witness the magnificent glory of nature.

On a more "practical" note, it can serve as a speedy means to visit my hometown in Michigan, which happened twice in 2011 by flying directly over Canada and the always-spectacular Niagara Falls.

Whether the flying was done in the unsettled air of spring...


...over a scarlet autumn landscape...


Even when not flying, seeing other airplanes fly was a definite treat.

Looking ahead into 2012, I think it's time for a new challenge.  Given some of my experiences in 2011, instrument training makes a lot of sense.  So, in the near term, I anticipate some panel upgrades for the Warrior so that she can fly in the system in a manner more closely resembling the state of the art (ug...money, again).  And, obviously, this means training for me.  Let's call it a New Year's Resolution.  I'm still figuring out the details; we'll see how it all goes.

Is It Winter, Yet?


After an unseasonably warm fall, winter finally arrived in Upstate New York yesterday.  Sure, it was just a dusting of snow, but the landscape was completely transformed.

I did not fly often in the last two months of 2011.  My most recent flight was the first week of December after a one month dry spell. The first landing that day was a bit...firm.  Pilots who have not flown in a while often talk about going aloft to "knock off the rust". I would like to think that first hard landing helped to expedite removal of that metaphorical rust.

When the opportunity arose to fly this clear, sunny morning, I jumped at the chance.  I visited Oswego County Airport (FZY) for cheap fuel, Williamson Sodus Airport to be social, and Dansville Municipal for lunch.  Along the way, I got to see the sights, practice in the patterns of multiple airports, and do some stalls, steep turns, and the usual airwork stuff. 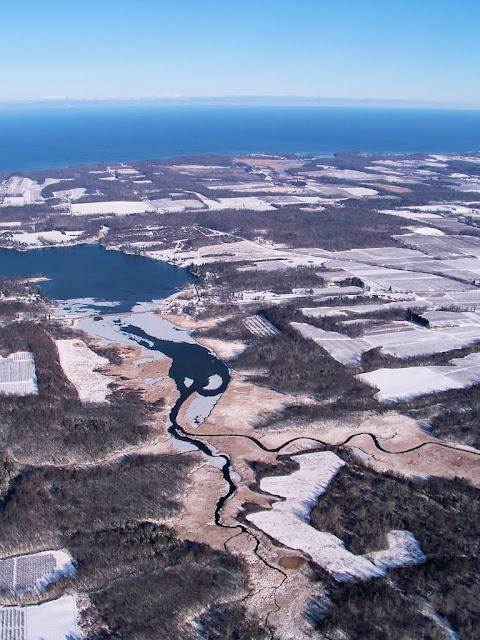 Question: "How can you tell when it's cold outside?" 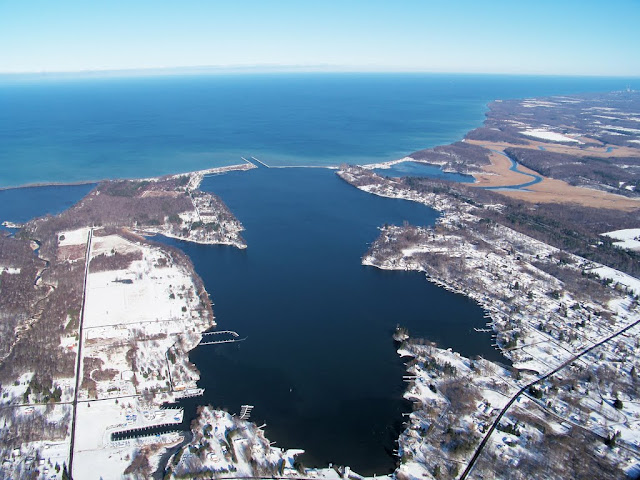 After the first snowfall, I am always astounded by how different the landscape appears.  This wonderment has a limited shelf life, however. After my first encounter with black ice on the ramp outside my hangar each season, I begin looking forward to spring again. 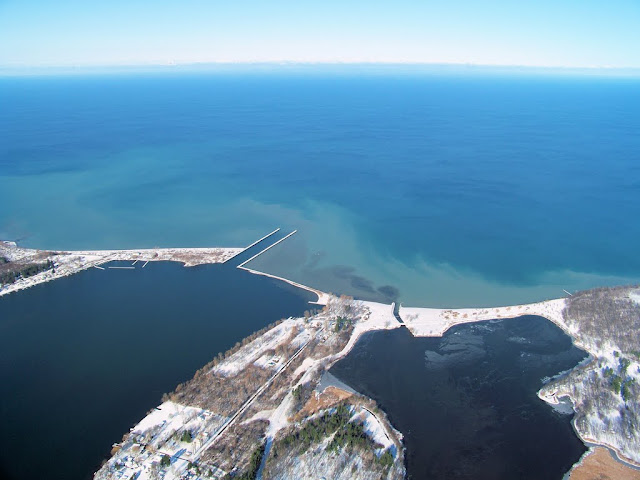 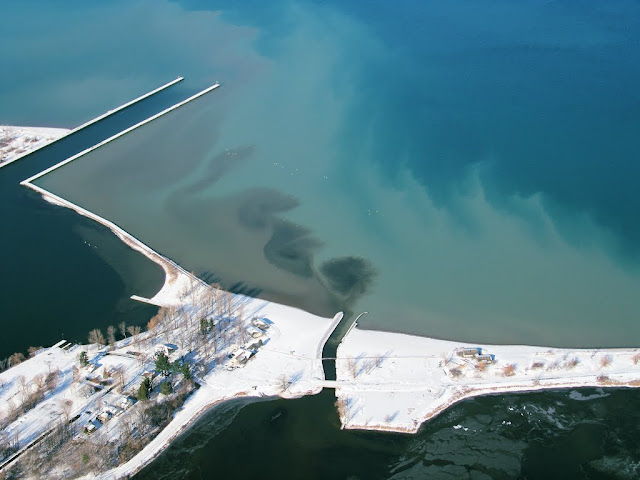 The dark effluent into Lake Ontario caught my eye.  Anyone care to try and model the fluid dynamics of this system? 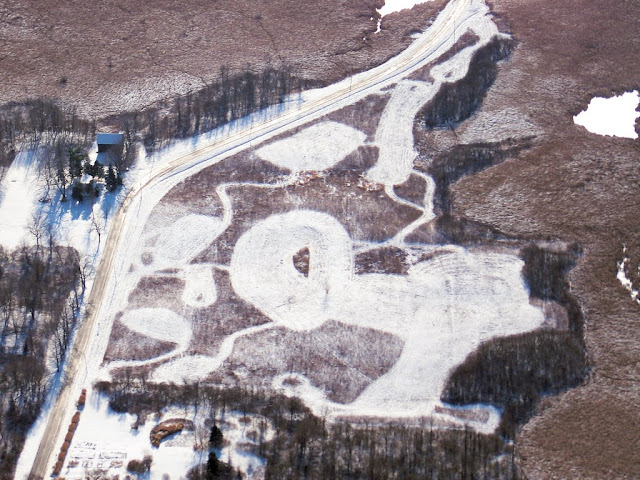 Hmmm.  It looks like the aliens who created this crop circle may have been hittin' too much of the hard stuff. 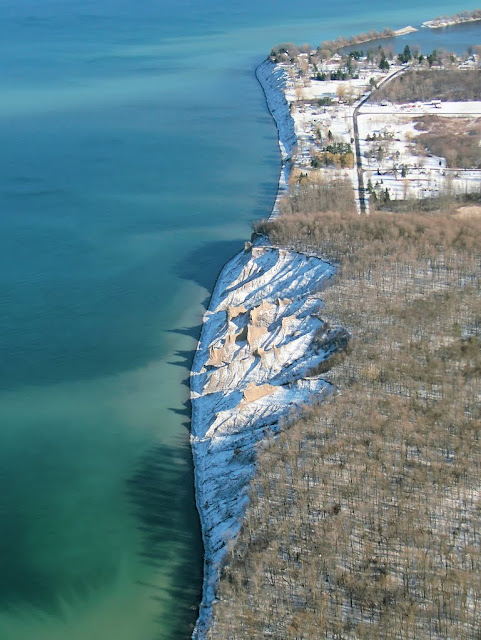 On my way into the Williamson Sodus airport, the pattern was a bit of a circus.  So I stayed to the east and circled Chimney Bluffs while things sorted themselves out. 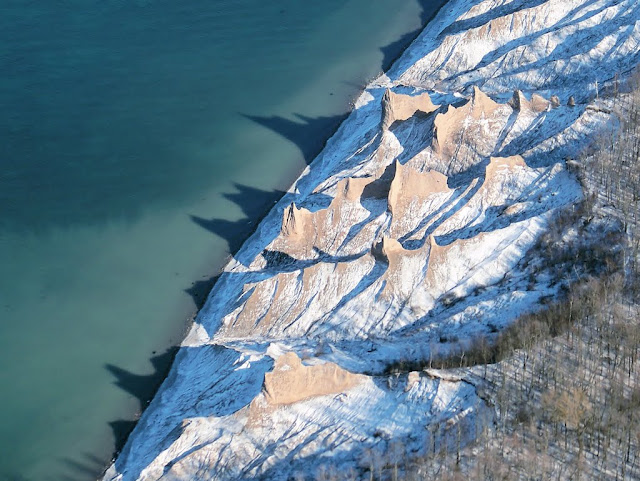 Someone sprinkled powdered sugar on the bizarre formations along the Lake Ontario shoreline and I oddly found myself craving dessert. 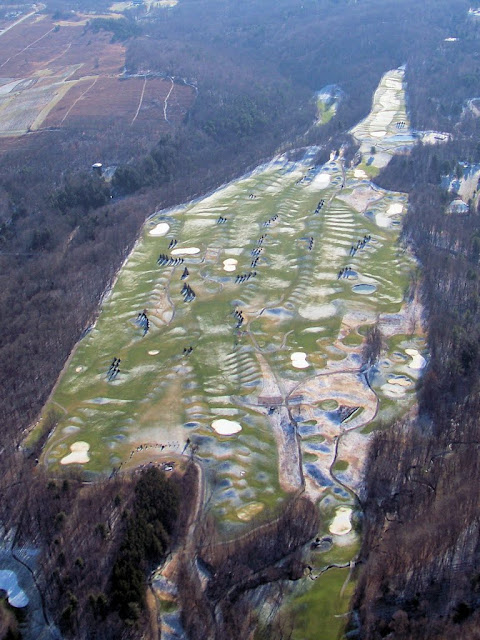 Flying south, away from the lake, found the landscape only lightly dusted with snow.  In the case of this golf course, residual snow accentuated every nuance of texture (this one really needs to be blown up to full size to appreciate). 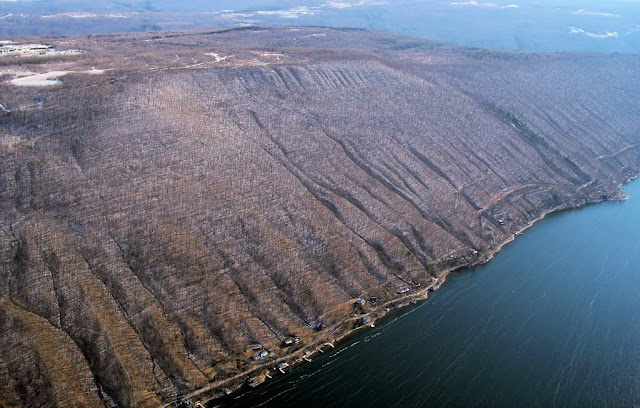 I flew along Canandaigua Lake, noting wrinkles and crags in the nearby hillsides that usually lie hidden beneath a canopy of green leaves.

It was a good flight...good enough to hold me for a couple of weeks, if necessary.  Now that winter has finally arrived in New York, it's anyone's guess when I might be able to take the Warrior out for exercise again.
Logged by Chris on Sunday, December 18, 2011 4 comments: