For the first time since April 2009, Warrior 481 departed for Knoxville, TN so that our family could visit my dad and stepmother. We climbed aloft equipped with a newly-installed PS Engineering PMA7000B audio panel. This upgrade gives us the ability to hear music over the intercom for entertaining The Bear on long trips. It also adds a pilot isolation feature so that Kristy and The Bear can chatter away on the intercom without distracting me from (and being distracted themselves by) transmissions from air traffic control. The existing intercom wiring needed to be replaced anyway. Since buying the Warrior in 2004, one of the back seat intercom jacks has been inoperative ("inop", as the aviation folks say). With the work complete, I now have a true four place intercom system, pilot isolation ability, and separate music inputs for the front and rear seats.

Up until now, The Bear has worn a Peltor Junior hearing protector without audio. With the upgrade complete, this trip marked The Bear's first wearing of a real headset, the very David Clark H10-13.4 headset that I wore on my first solo.

High pressure more or less dominated the entire nation east of the Mississippi. Skies were generally clear of clouds and the ride was smooth at altitude. However, all points along our route sweltered in 90°F temperatures and the air was so saturated with moisture that it formed a visible haze layer extending from the surface to several thousand feet above sea level. Because of the haze, all pictures taken of ground objects on this voyage were tinged a smoky blue color. Paint Shop Pro came to the rescue and restored some of the color, but if some of the hues in these photos are a little wonky...well...I tried. 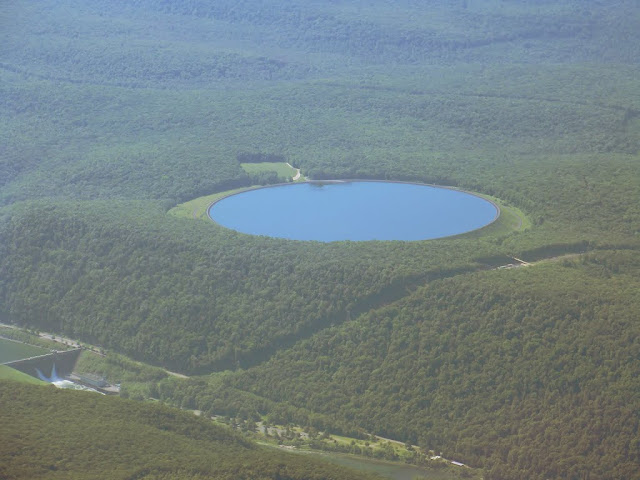 Crossing from New York state into Pennsylvania, we flew over a lidless blue eye staring up into space from the densely forested countryside.  The Seneca Reservoir is a pumped storage facility drawing on the waters of the Allegheny Reservoir. 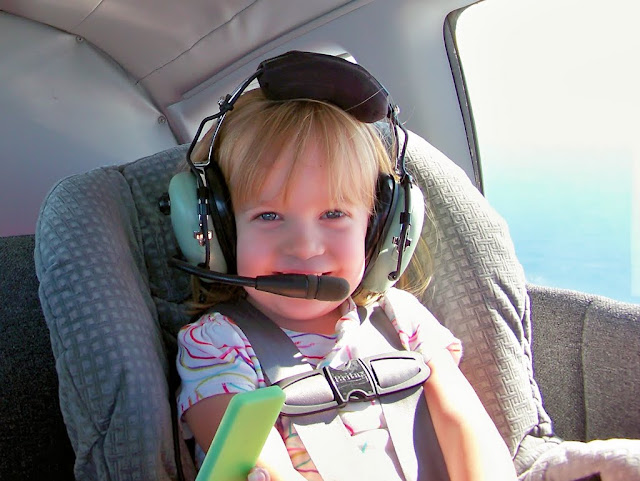 Here, The Bear grins around the microphone of her lopsided headset.  When I occasionally switched the audio panel from "isolate" to "all" and checked in with my back seat passengers, The Bear would look at Kristy with amazement in her eyes.  "I hear Daddy!" she would exclaim.  "Hi Daddy!".  While watching a "Dora the Explorer" DVD, The Bear quickly discovered that the audio panel is designed to mute the music input in favor of priority radio and intercom communications.  When prompted by Dora to say "backpack", The Bear's response immediately caused the audio to mute momentarily.

"Why does Dora stop talking when I talk?"  Rotating the microphone boom away from The Bear's lips for the remainder of the video rectified this problem. 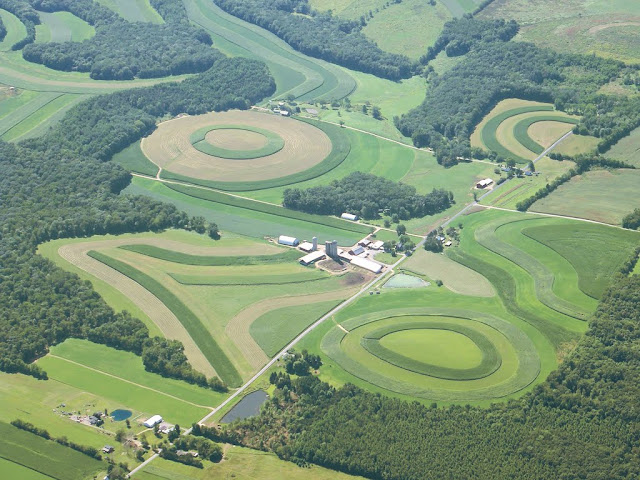 Flying over Pennsylvania farmland, I was surprised to see a rather Simpsonesque face staring back up at me. 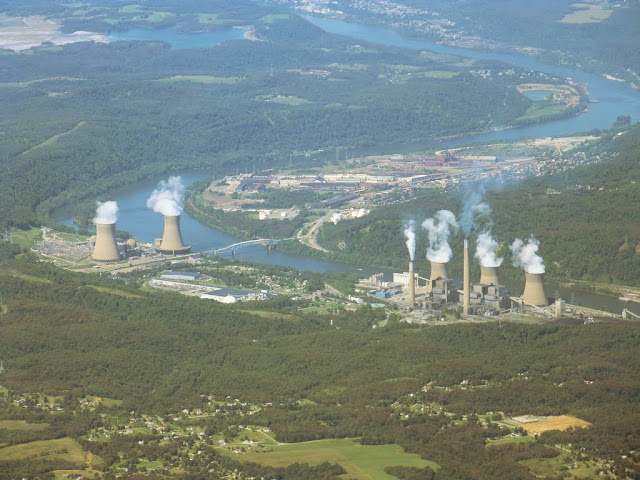 From 7500 feet, I saw some Erlenmeyer flasks near Midland, PA into which someone must have dropped dry ice.  In the immortal words of Thomas Dolby...SCIENCE! 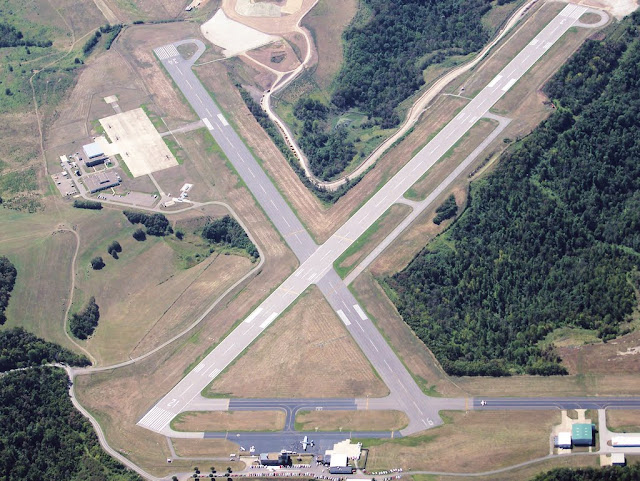 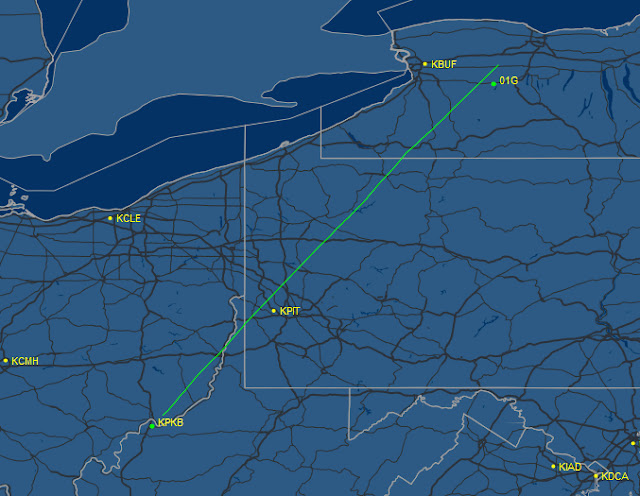 As on our prior journey to Knoxville, we stopped about halfway at the Mid-Ohio Valley Regional Airport (PKB) in Parkersburg, WV for lunch at Mary's Plane Place.  Just like last time, Jerry directed us to parking and saw to refueling Warrior 481.  The juicy, real hamburger I had for lunch was immensely satisfying and The Bear greatly enjoyed the chunky applesauce that came with her meal.

After being mocked by Darrell during the Luray trip for not holding as straight a course as his autopilot does, I've been self conscious about staying true to a heading.  As this track from Flight Aware shows, I don't do so badly hand-flying for two and a half hours.

Two hours beyond Parkersburg, WV, we reached the Knoxville Downtown Island Airport (DKX).  It was HOT in Knoxville.  When I seated myself on the ramp in an attempt to tie the airplane down, I actually burned myself through the seat of my pants.  Now that's hot.
We spent a day and a half in Knoxville reacquainting grandfather and granddaughter with one another.  Never one to disappoint, The Bear put on one heck of an entertaining show for everyone in Tennessee. 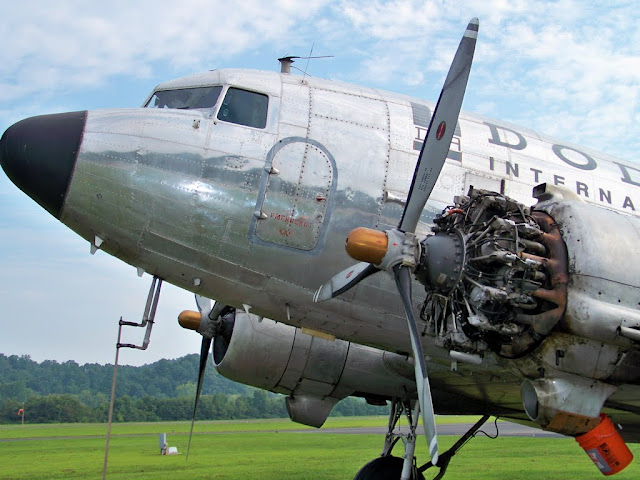 A new addition to the birds roosting at Knoxville Downtown Island Airport (DKX) is this transport owned by Dodson International.  Sagely, my dad informed me that it was a DC-3, clearly pleased with himself for knowing this aeronautical trivia.  Before thinking about what I was doing, I burst his bubble by pointing out the cargo door near the aircraft's tail feathers that indicated it to be a C-47 variant.

Sometimes, I should just keep my fool mouth shut. 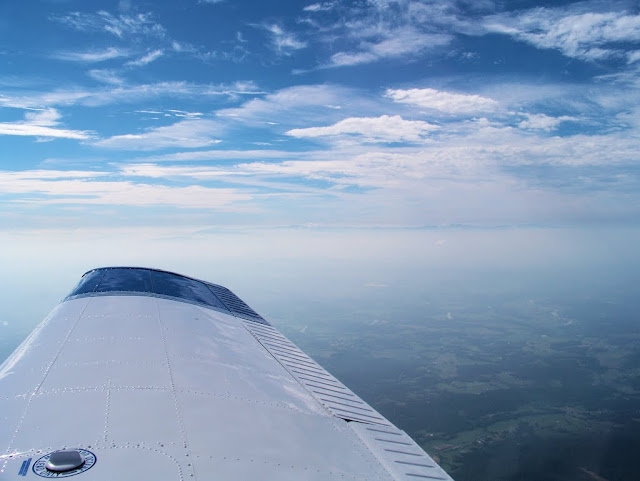 Temperatures were still moderate when we left Knoxville on the morning of August 30, but the haze layer nevertheless reached over six thousand feet.  Cruising home at 7500 feet, all we could see of the Smoky Mountains were the peaks reaching through the haze (visible in the above photo if you look closely). 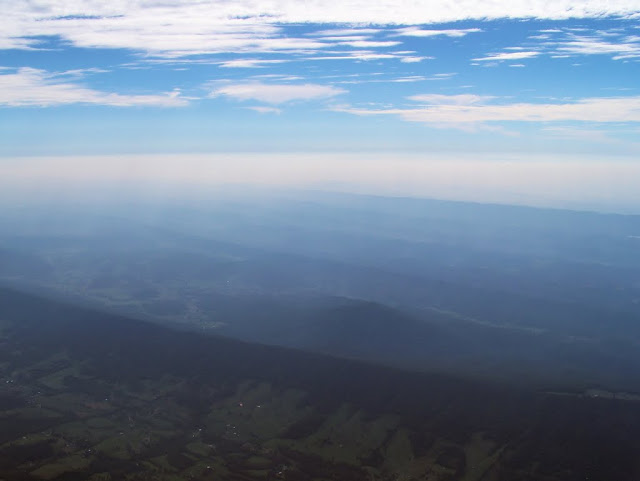 Below the haze, a treacherous array of ridgelines dominated the landscape near the Kentucky border. 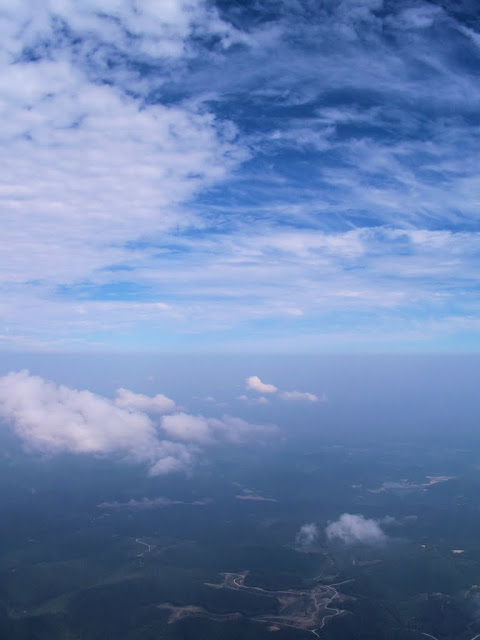 From above, the haze layer seemed so substantial that our cruise altitude of 7500 feet gave the false impression of flying dangerously low.  Regardless, we skimmed along the top of the layer, flying with reference to the false horizon it created. 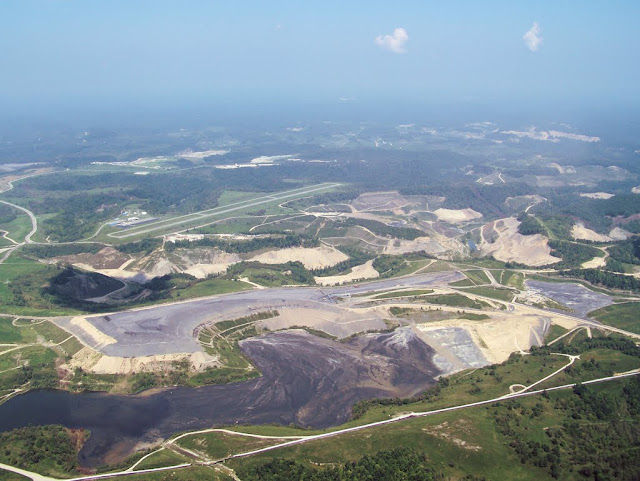 We stopped for lunch in Prestonburg, KY at the Big Sandy Regional Airport (K22).  The region adjacent to the airport reminded me of a giant sandbox.

We were directed to parking and welcomed to Big Sandy Regional by a friendly fellow who appeared to be in charge.  Peering at Kristy and The Bear in the back seat, he inquired if I felt like a chauffeur.  In fact, using "pilot isolate" mode on the intercom made me feel EXACTLY like a chauffeur.  I was momentarily reminded of the scene from "This Is Spinal Tap" when the band raises the barrier on Bruno Kirby's Sinatra fanatic limo driver.

When told that we planned to have lunch at the Cloud 9 Cafe, he gave an approving nod and told us that we would love it.  After a pause, he disclosed with a smile that his daughter ran the place and that he might be slightly biased. 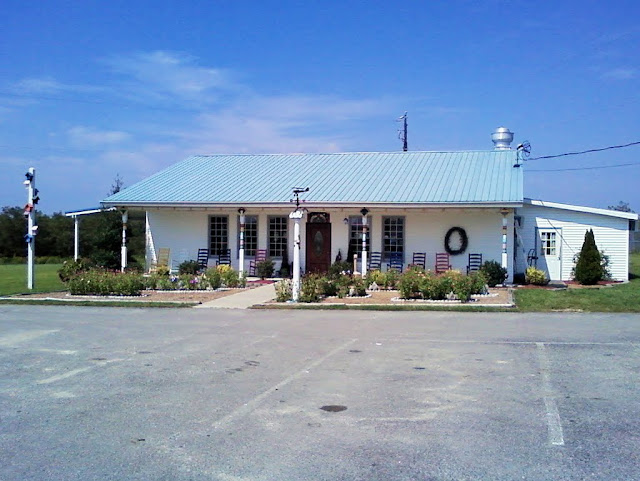 The Cloud 9 Cafe is decorated in a whimsical, Americana style with an aviation slant.  Multihued rocking chairs line the front porch of the restaurant, making it a colorful, aeronautical version of Cracker Barrel.  The people were friendly; indeed, many of the patrons seemed quite amused by The Bear when she emerged from the bathroom and shouted "Daddy!" loud enough for all to hear.  Our food was good and The Bear particularly liked her smiling fries. 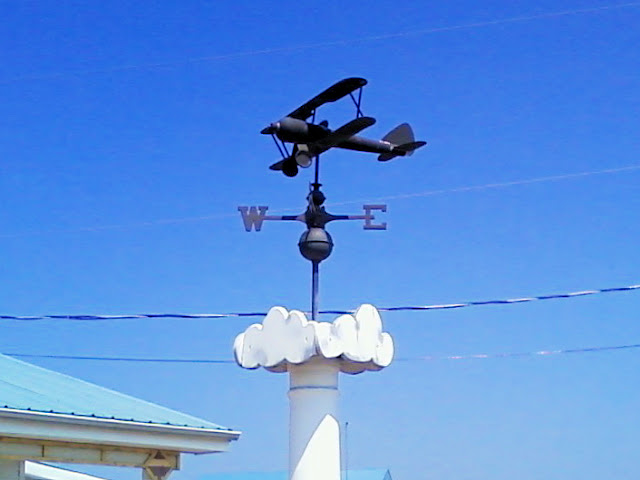 The hand-carved wooden clouds at the base of this weathervane outside of the Cloud 9 Cafe are typical of the decor inside. 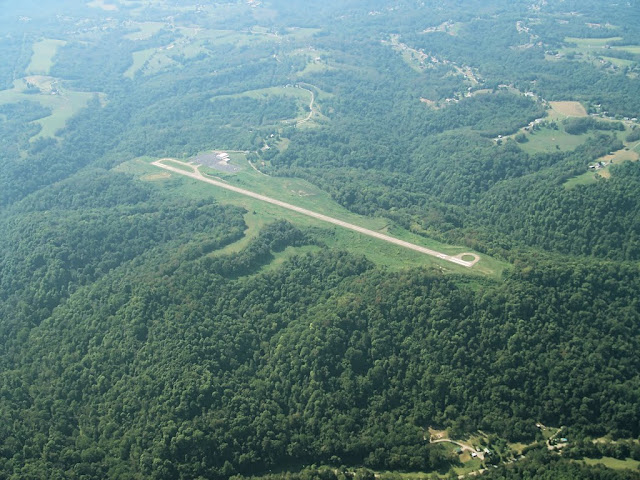 After flying 1.5 hours, we landed at Marshall County airport in Moundsville, WV for fuel ($3.98/gal - a bargain!).  Though the above picture does not quite capture it, this airport sits on the top of a narrow mesa.  The woods surrounding the runway actually covers the steep slopes of the mesa.  Landing here was like landing on an aircraft carrier (well, if aircraft carriers presented the luxury of 3300 feet of runway).

"Look at that runway, isn't it cool?" I enthused over the intercom.  My wife did not share my excitement about the runway tenuously perched atop a skinny sliver of a mesa.

Fearing the usual downdraft at the cliff edge near the approach end of the runway, I remained high on final approach.  The problem with this strategy was that there was no wind to speak of.  Thus, there was no downdraft nor was there any wind to slow our groundspeed.  Significant thermal activity from the pavement buoyed our already high airplane.  Halfway down the runway, we were still much too high and I aborted the landing.

On the second time around, I made a reasonable landing and taxied to the self serve fuel pump.  I fought a little with the unfamiliar pump, but finally managed to refuel the airplane.  The airport office was open, but deserted.

Once we were fueled and ready, The Bear balked at climbing back into the (now) hot airplane.  With much coaxing, we were soon back at cooler altitudes and climbing through Pittsburgh's Class Bravo airspace to our final cruise altitude of 9500 feet.  Two hours later, we were back on the ground in Le Roy, another longish trip under our collective belts.  The Bear has accumulated an impressive 115.7 hours in Warrior 481 in her short three years as an aviatrix. 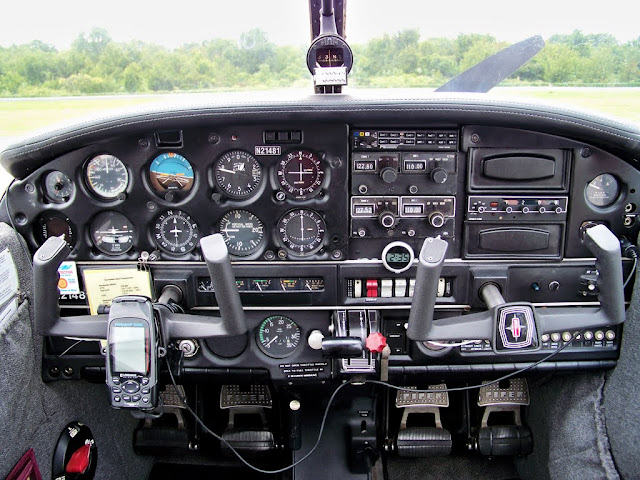 The audio system upgrades made the trip much easier on Kristy who was able to take some moments to read or doze rather than spending the entire journey trying to entertain The Bear without being able to hear or talk to her.  And The Bear definitely enjoyed being able to talk on the intercom.  I am not one to spend money on frivolous avionics upgrades.  After all, I fly a thirty year old airplane with forty year old radios (above, in most recent picture of panel).  But this one was a worthwhile improvement to the quality and comfort of flight for my family.