Airports come in many flavors.  Say "airport" to the average citizen and they will no doubt conjure a mental image of heavies launching from the vast asphalt maze that is Chicago O'Hare or John F Kennedy International.  In truth, airports cover a continuum from the world's busiest commercial hubs to sleepy rural airfields that see very little activity.  In a world where smaller airports are threatened by economics and public opinion, some places still harbor an unquenchable spark of life where "grass roots" flying still exists.  Pilots are drawn to these places.  One such pocket is the Wellsboro-Johnston Airport (N38) in Pennsylvania where the grass roots spirit lives within manager Wes McKinney.  Pilots don't come much more "grass roots" than Wes.  If asked, he'll proudly tell you that he's not qualified to even land on pavement. 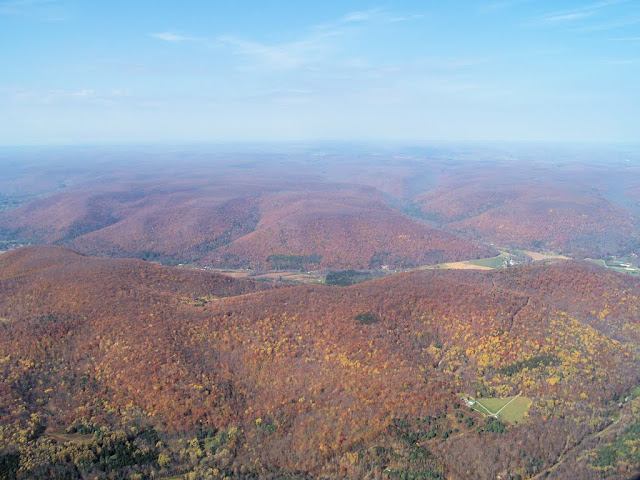 The most brilliant of fall colors were retired for the season when I arrived over the impressive hills of northern Pennsylvania's "Grand Canyon".  Reds and yellows still dominated the landscape, but the color saturation was a bit "lean of peak". 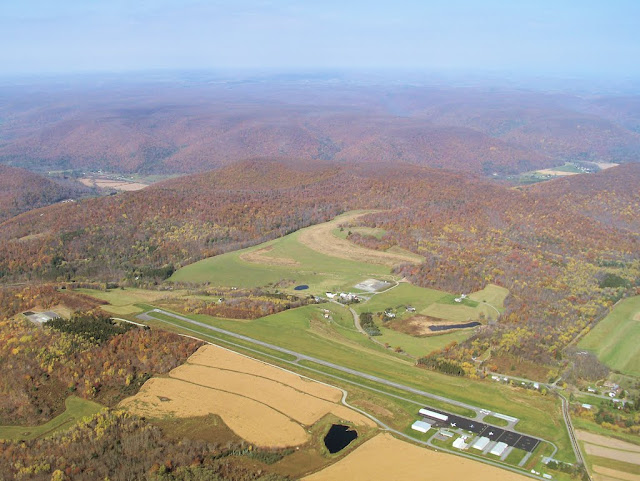 On the ground at Wellsboro, I was met by manager Wes and his four-legged assistant managers Pratt and Whitney.  I gave Pratt (or was it Whitney?) a scratch behind the ears as Wes introduced Jerry.  Wes was doing some electrical work on Jerry's airplane so, in return, Jerry was acting in the capacity of line boy for the day.  Under Wes' tutelage, Jerry set up the fuel pump for me, stopping short of actually pumping the gas.

"THAT," Wes explained with a grin, "would cost me an extra two cents per gallon in liability insurance."

When I asked for an update on his Murphy Moose project, Wes proudly announced that the aircraft had just passed its FAA inspection.  Unfortunately, the FAA misspelled Wes' name on the airworthiness certificate, effectively rendering the aircraft unairworthy.  After all these years, I should not be amazed that we live in a world where bureaucracy can trump physics, but I found this to be somewhat mind boggling.

Wes invited me into his hangar to admire the large, radial-engined bush plane that he had spent the last eight years building.  In the back of the hangar lurked Wes' T-6 Texan.  I asked him if he had it flying again and he shook his head.  "Naw, that engine hasn't been right since it was last overhauled.  It's quit on me ten times, and that's just one time too many."

The Murphy Moose is aptly named; it's a BIG airplane, a high wing taildragger that would dwarf my humble Warrior.  While Wes showed me some of the modifications he had made on the design, our discussion was interrupted by the sound of a turboprop passing overhead. 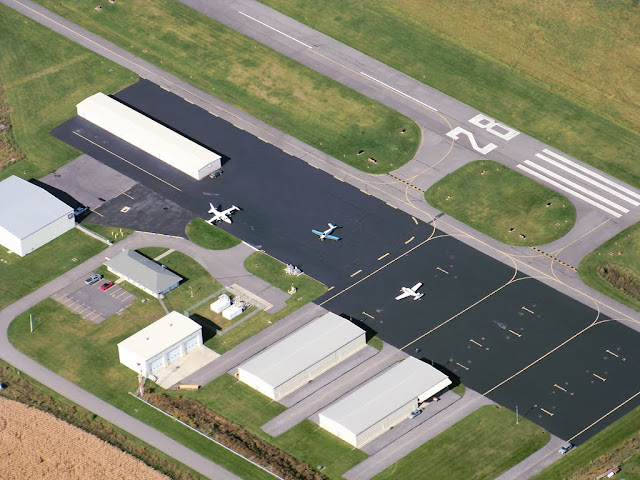 For the next ten minutes, Wellsboro was a rather busy airport.  A twin turboprop resembling a Mitsubishi MU-2 landed and parked adjacent to where Whitney (or was it Pratt?) was dozing in the grass, completely unperturbed by the noisy turbine aircraft.  Shortly thereafter, a battered Cessna Skyhawk touched down and made for the fuel pump.  While Wes directed the Cessna to pull beside Warrior 481 for fuel, a low wing aircraft entered the pattern.  As it turned final, it resolved into a beautiful V-tailed Beech 35 stopping for fuel en route to Fort Myers, Florida.  Throughout this parade of arrivals, a light sport aircraft continued to practice in a low altitude right traffic pattern from the unofficial grass runway adjacent to the pavement.

As the ramp began to fill, Wes hollered jovially at Jerry, "at this rate, we're not going to get any work done on your airplane today!".  Jerry shrugged without comment.  While not as outgoing as Wes, he nonetheless seemed to enjoy the activity brought on by all the new arrivals.

Wes helped me push Warrior 481 back to make room for the latest fuel supplicant.  I thanked him for his hospitality while he enthusiastically shook my hand.  Indeed, grass roots aviation is alive and well in Wellsboro and my brief visit there was balm for a cynical soul. 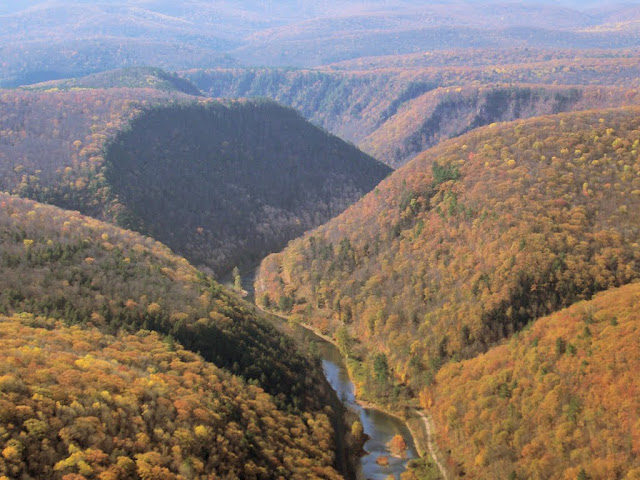 When one launches from runway 28 at Wellsboro and clears the end of the pavement, the ground abruptly drops away into this canyon.  Check out the faded orange carpet - was this place last redecorated in the decade of Ford Mavericks and those awful, yet oddly ubiquitous, rust-brown refrigerators? 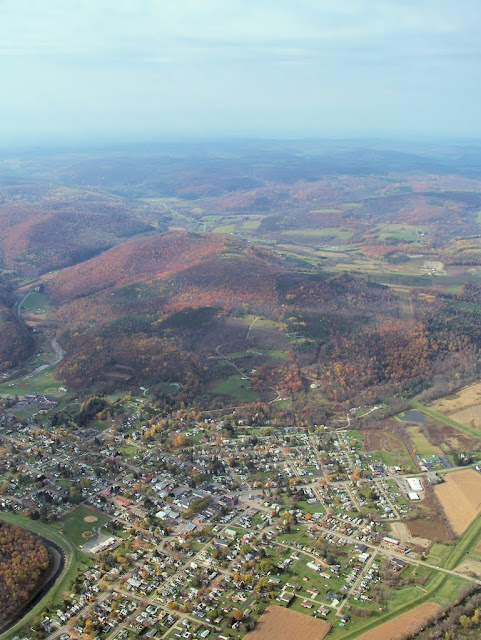 Warrior 481 hung motionless in the air as the world rolled slowly by underneath.  From northern Pennsylvania to Rochester New York, I passed from town to town, each surrounded by rusty hills like the ones around Canisteo NY above. 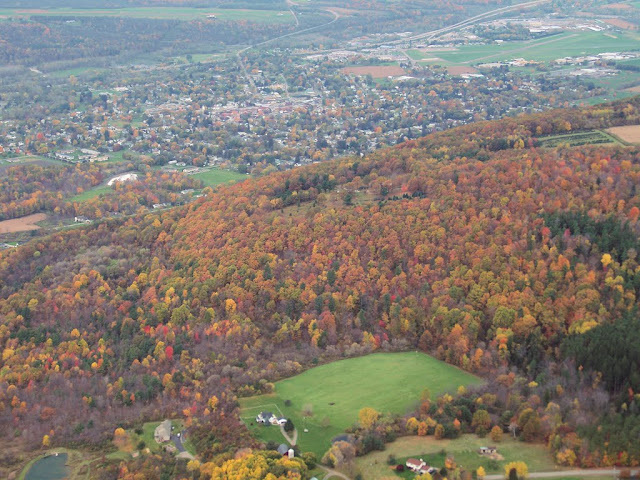 My hunger for grass roots aviation was sated, but I realized that I need lunch.  I diverted to Dansville NY, which remains a curiously vibrant pocket of fall color, even under an overcast.  So I got to see some brilliant fall color after all.
Logged by Chris on Saturday, October 23, 2010 No comments:

Email ThisBlogThis!Share to TwitterShare to FacebookShare to Pinterest
Labels: Article


Earlier in the week, I mentioned to my friend Matt that I planned to take vacation on Friday to fly.  Because this would be a work day, Matt commented that it was a shame no one would be available to come with me.  When I shrugged without much comment, Matt nodded knowingly.

I couldn't have said it better myself. 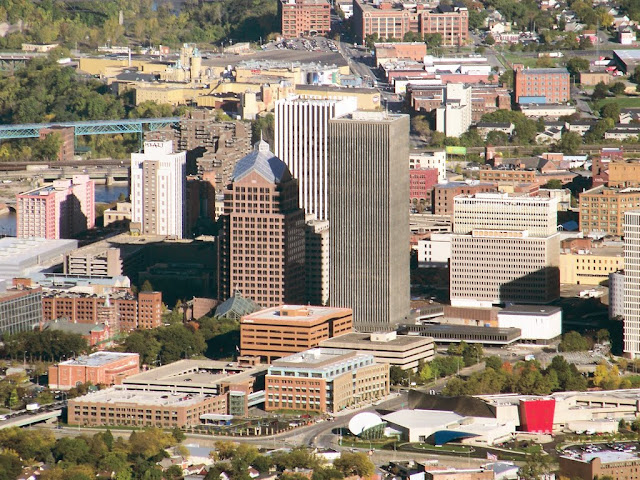 Because the winds were forecast to be high after lunchtime, I decided that I would fly early and forgo any long trips out of the area.  Rather, I would stay in the Finger Lakes region and take some pictures starting with my house.  Above is a shot of the Rochester skyline as I traversed Rochester Class Charlie en route to my neighborhood.  The approach controller was very helpful this morning and it is a shame that his hard work did not lead to any decent photographs of my neighborhood. 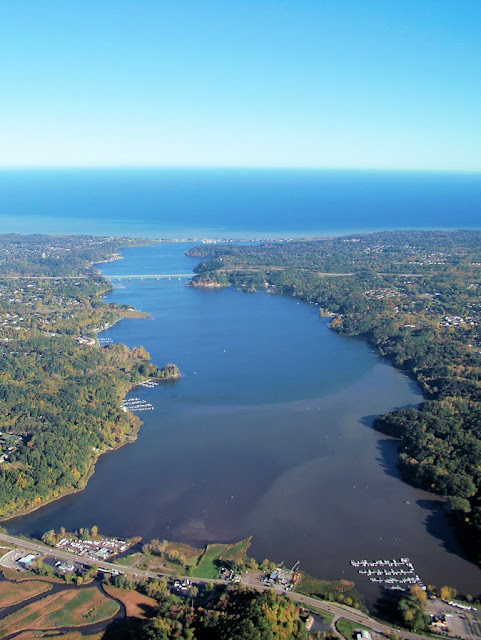 I did, however, get this shot of Irondequoit Bay with Lake Ontario in the background. 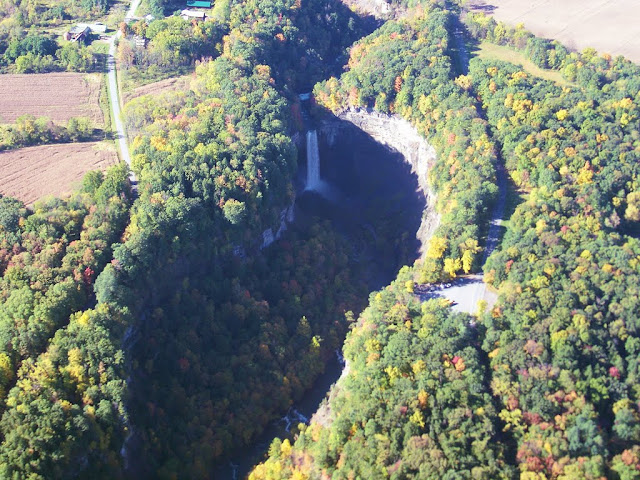 I departed Rochester airspace to the east, dropped radar services, and cruised south along the western shore of Cayuga Lake until I reached the distinctive gorge concealing Taughannock Falls (above). 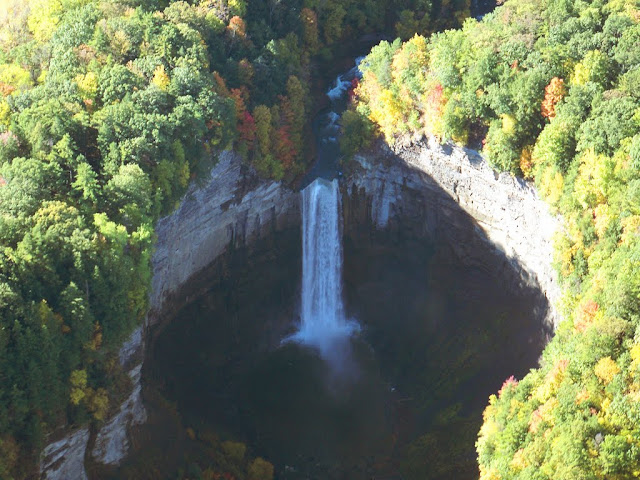 A closer look at the 215 foot tall waterfall.  I really need to hike this gorge and see it from the ground sometime. 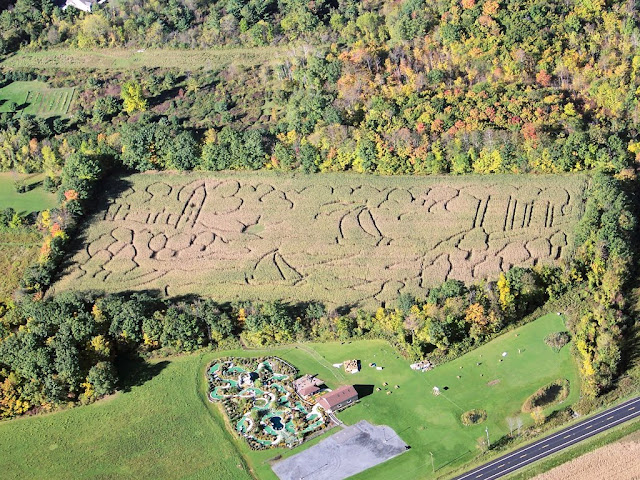 Next, I circled the nautical-themed corn maze outside Trumansburg, NY. 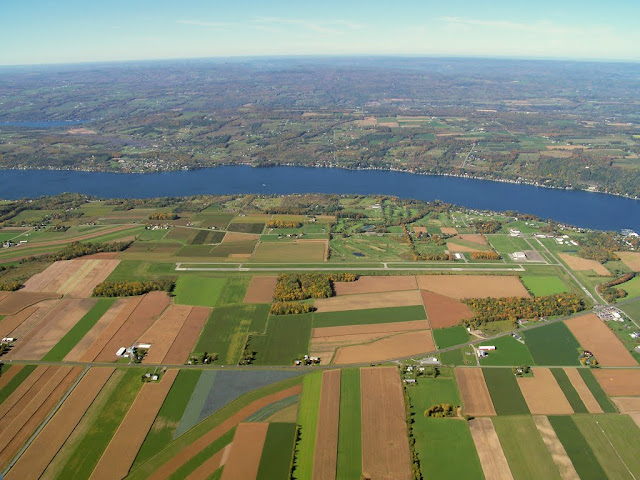 Penn Yan, NY is situated on the east branch of Keuka Lake.  I made a quick pit stop here.  It was my second ever landing on runway 28 with its significant downhill grade.  This time I was ready and I stuck the landing nicely. 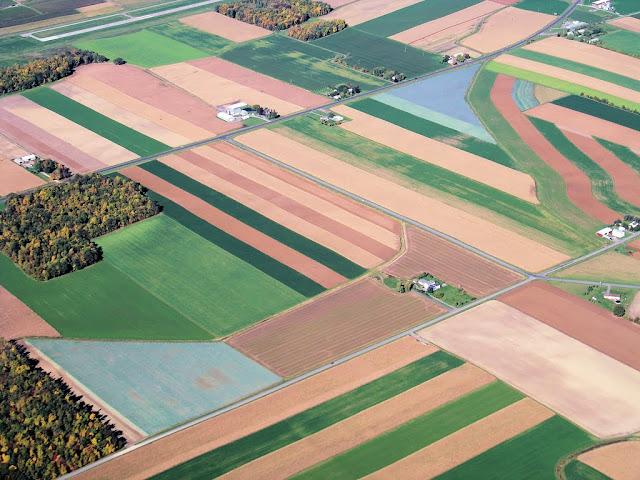 Penn Yan is surrounded by a patchwork of contoured and striped fields.  I wish I knew what type of crop is light blue! 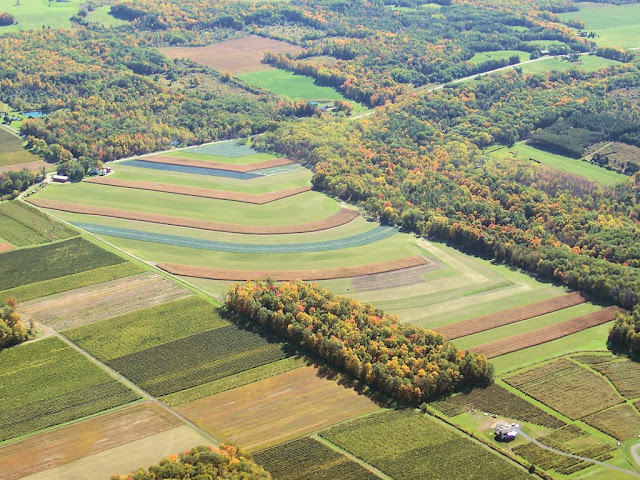 Another field close to the Penn Yan airport, also featuring some rather unusual colors. 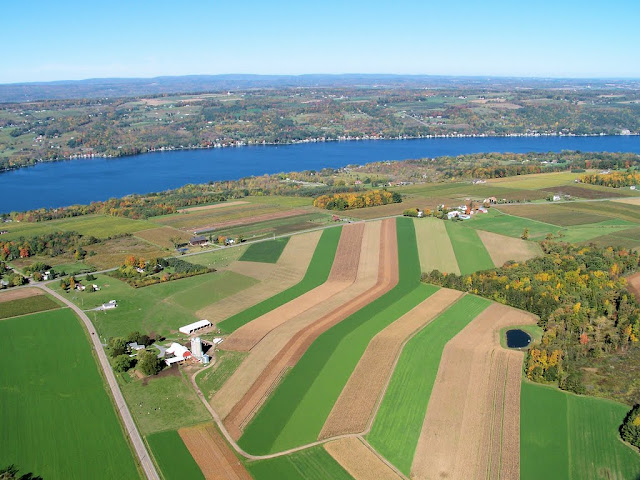 I've been flying in New York for nearly five years and I am still struck by the diversity of shapes to be found in farmer's fields. 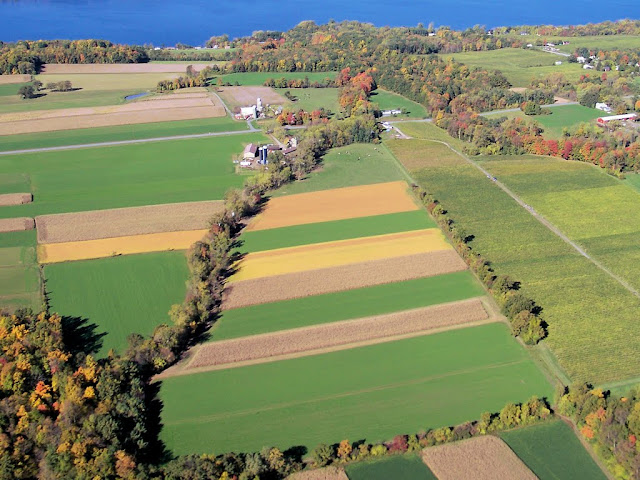 Just a nice showing of color. 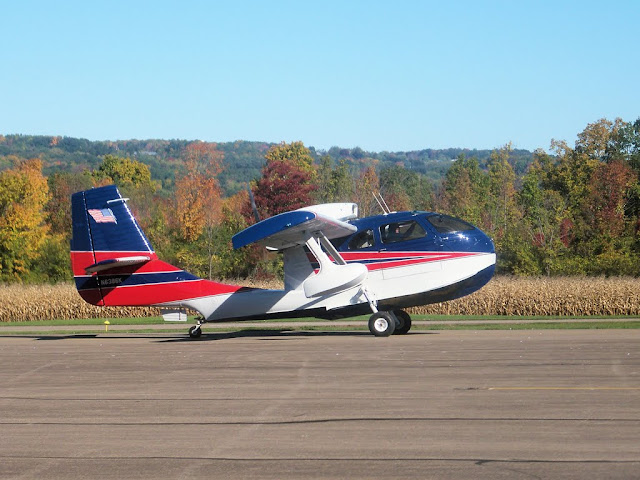 A Republic RC-3 Seabee taxiing uphill for departure on runway 28 at Penn Yan.  This is quite possibly one of the goofiest looking mass produced aircraft out there, but I imagine it would be a blast to splash around in one. 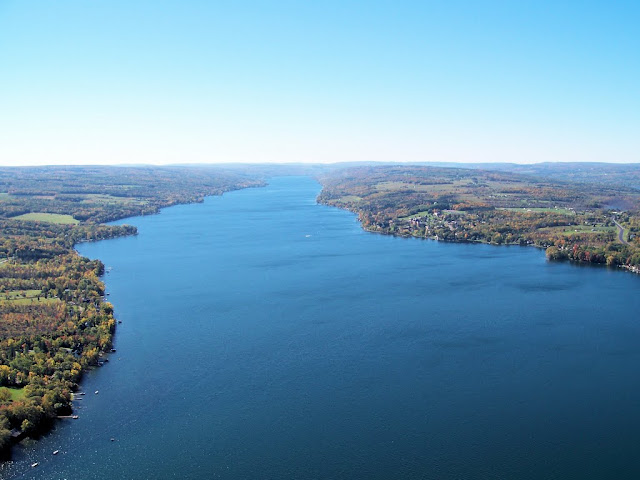 This is the view southward along the east fork of Keuka Lake taken on climb out from Penn Yan's runway 28. 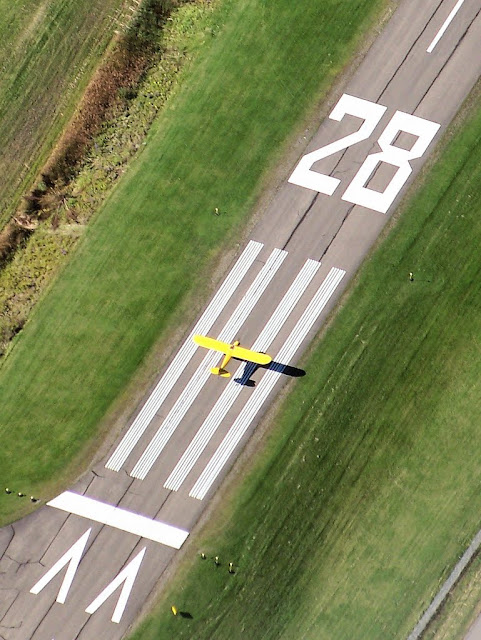 While I was at Penn Yan, a radio-silent Piper Cub was practicing in the pattern.  After departing the airport, I climbed to 4500' to photograph some of the surrounding fields and had the good fortune to catch the cub moments before landing.  The winds were steadily increasing and becoming sufficiently gusty that I was grateful for the higher wing loading of the Warrior compared to the lightweight aircraft below.  I imagine the Cub pilot had quite a work out, but he or she held that centerline like a pro. 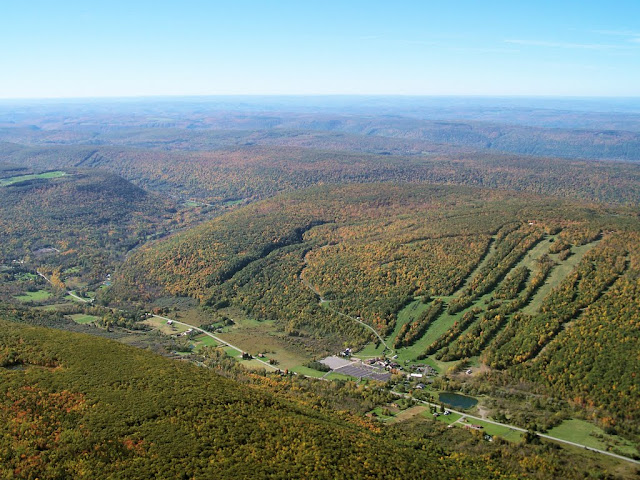 Heading home, I crossed Canandaigua Lake and passed the Bristol Mountain ski resort (above).  I will certainly grant that the resort occupies one heck of a big hill.  But, "mountain"?  Unless this is relative to "Mount Holly", former landfill turned ski hill near Flint, I'm not convinced that this is truth in advertising.

I landed at Genesee County airport in Batavia to tie up a loose end at the shop from the recent avionics upgrade.  When I landed, the winds were running 16 knots gusting to 24.  Warrior 481 bumped through the turbulence with occasional aileron and rudder inputs from me to keep her on course.  A few feet above the runway, the Warrior was caught in a mild thermal from the hot asphalt.  From the strong headwind, my groundspeed fell to a ridiculously low value.  Warrior 481 seemed to hover, motionless, over the runway for a moment before gently alighting.

I am a leaf on the wind.

Talk about a moment of Zen.

By the time I returned to Le Roy, the peak wind gusts were approaching 30 knots.  We descended toward the runway nearly vertically, continuously buffeted by gusts.  With a mild squeak, both mains rolled onto the pavement simultaneously just as gently as they would have on a calm day.