Number 208
November 2020: corrosive politics and surging coronavirus rates. What a time to be alive...
The evening before a planned brunch flight to Big Slide in Lake Placid, we learned that the brewpub was voluntarily closed for two weeks due to staff COVID-19 infections. A last minute scramble settled on Sky Acres in the Hudson River valley as an alternative destination, an airport that has been on my list for some time to visit. The on-field diner, Hangars Cafe, had ample outdoor seating; just the thing to enjoy a $100 "hamburger" while minimizing viral exposure. Sky Acres became my 208th airport.
Flight of Two

We were delayed by a low tire on Ed's Archer that went from merely low to entirely flat before he was able to properly inflate it. The episode struck me as a metaphor for the novel coronavirus: that things were going to get worse before they got better.

"What's going on at 44N?" queried Syracuse Approach after both Ed and I checked in for flight following.
"Just looking for breakfast," Ed responded.
"Aren't we all?" came the unusually rhetorical reply from ATC.
The direct route to Sky Acres from Sodus took us over the Catskill Mountains. Historically, these relatively small mountains have had a knack for really churning up the air, but with low winds aloft, I flew directly over the highest peaks with virtually no disruption. 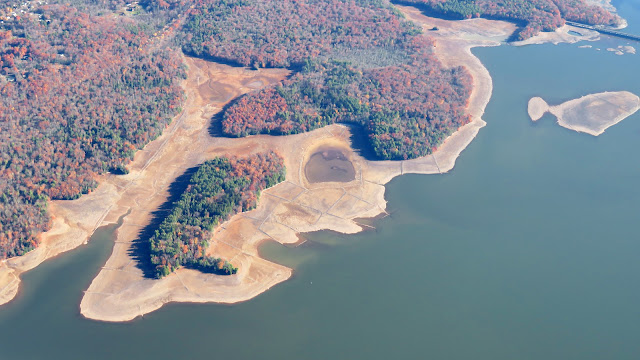 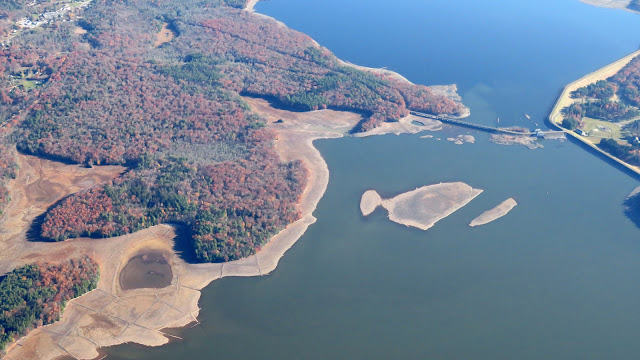 It appeared that the water in the Ashokan Reservoir was a bit low. In the distance, the Manhattan skyline and ultimate recipient of the reservoir's water was just discernable through the haze.
After four attempts to cancel VFR flight following with New York Approach (I lost track of the number of tries, but Ed was counting), Approach called to ask if I had the field in sight yet. I reported that I did not, but seized the opportunity to cancel while I had his attention. Moments later, I identified the angled cut across wooded rolling hills that marked the position of the airport.
"Sky Acres Is the Place To Be..."
But where is Arnold Ziffel? 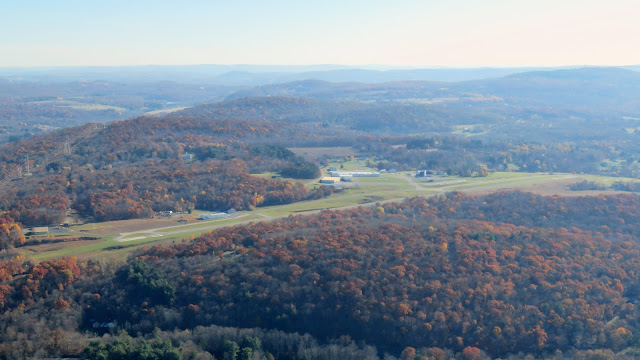 Because the wind was calm and the direction convenient, I entered the pattern for runway 35 at the former farm. 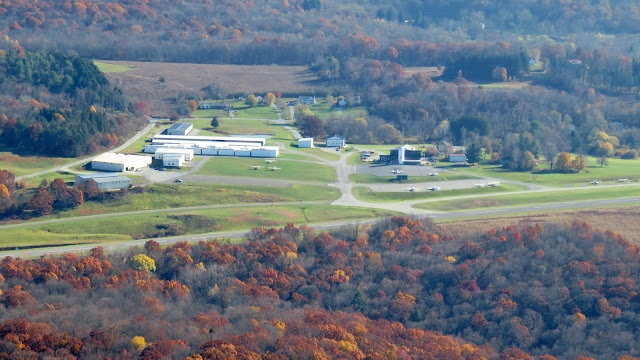 If you’re going to build an airport on the side of a hill, take a lesson from ancient Peruvians and make good use of terracing. Those who created Sky Acres airport certainly did. One needs to taxi uphill from the runway to reach the parallel taxiway and each parking area is set at progressively higher elevations. I am not trying to claim that Sky Acres is the Machu Picchu of airports, but I think the Incas would have been impressed. 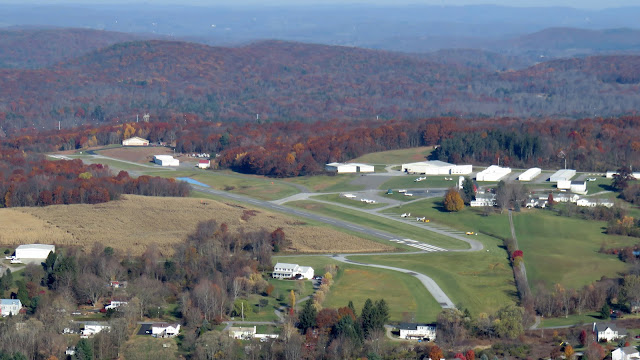 Sky Acres is a public use general aviation airport set among the rolling hills of downstate New York about 7 miles east of Poughkeepsie and 10 miles west of the Connecticut border. It is home to SkyGeek, the online pilot shop. For many years, it was also home to a popular $100 hamburger destination, Tail Winds Café. Sadly, Tailwinds Café closed its doors (as well as Tail Winds Café West at nearby KPOU) after the tragic death of owner Hope McLucas in June 2019. The facility at Sky Acres was renovated and reopened under new management as the Hangars Café in November 2019. 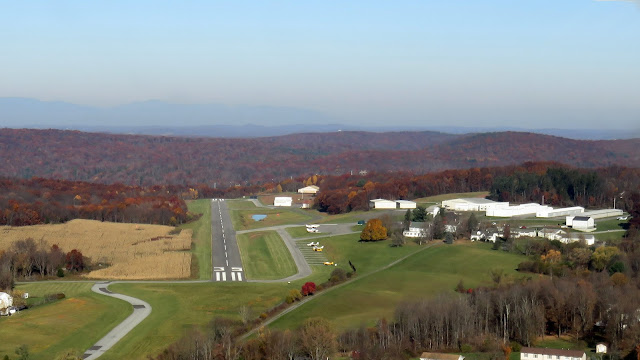 Rolling into final approach for runway 35, the terracing of the airport was quite striking to this pilot who trained among the flat-as-a-pancake cornfields surrounding Kalamazoo, MI. 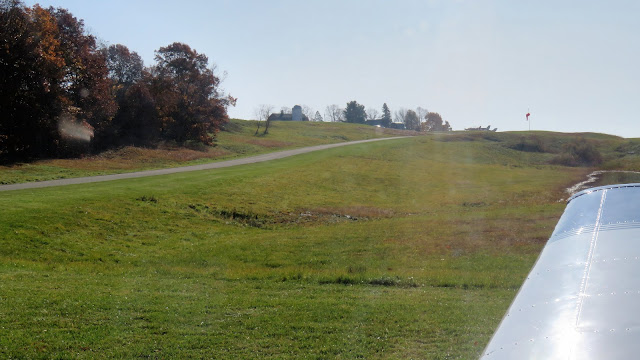 Exiting the runway, I was surprised by the uphill grade of the taxiway. It was time to taxi like an Incan! This place might be challenging in the winter. 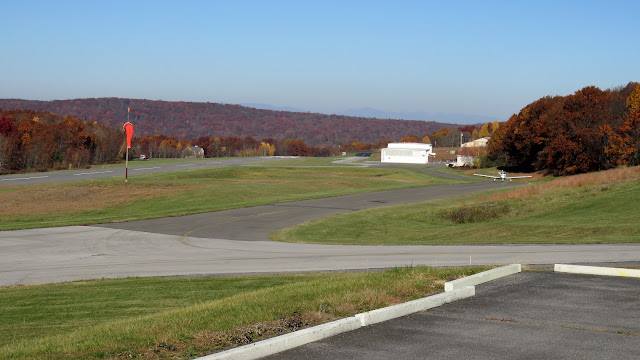 From the transient parking ramp, I watched Ed make the uphill climb in Four Four Papa. 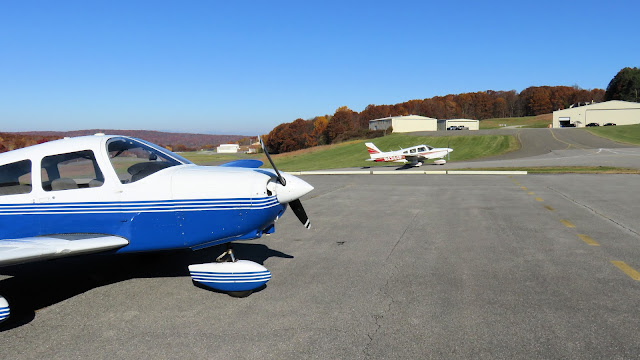 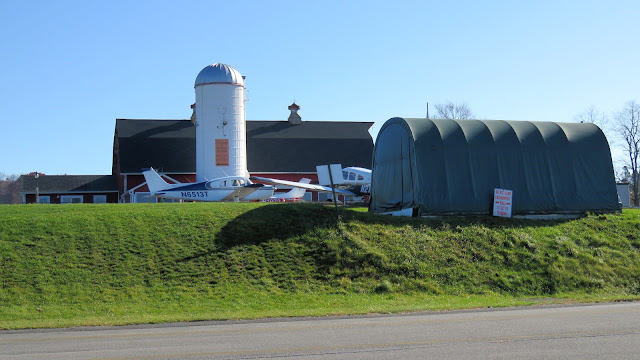 The terminal sat higher up on the hill than the dedicated transient parking ramp. The terminal ramp also had some transient parking as well as a fuel pump set as an island in the middle of the ramp to accommodate aircraft on both sides.
"Everyone Gets the Window Seat"
One year after its opening, the restaurant is doing strong business with lots of drive-in patrons -- a critical metric for the success of any airport diner, in my opinion. On a Sunday morning at 9:30 am, the restaurant was doing brisk business with people dining both inside and outside. Both sets of patrons had excellent views of the very active adjacent FBO ramp. (The restaurant's tagline is, "Here, everyone gets the window seat.") The staff were extremely friendly, the kitchen expedient, the food undeniably excellent, and the ambiance unique. After all, how many airport terminal buildings are actually repurposed dairy barns complete with a silo?
Ed and I requested outdoor seating. After a brief wait, we found the outside seating options to be extensive and well-distanced. This allowed Ed and I to discuss politics without risk of drawing wrath from other patrons. Just the day before, most news outlets predicted that Joe Biden was certain to defeat Donald Trump for the presidency. These announcements were met with loudly dichotomous reactions across the nation that comprised either denial or celebration. Regardless of one's viewpoint, it is undeniable that the weekend represented a unique moment in time for our nation. 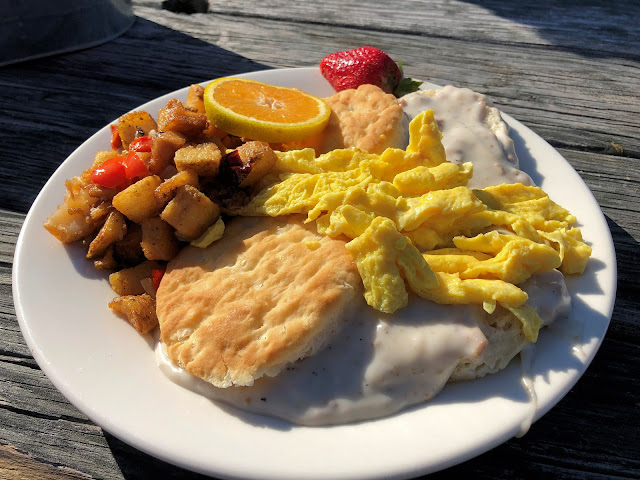 I gave in to a long-unsatisfied craving for biscuits and gravy that morning. Though the gravy was not the best I've ever sampled, everything else was excellent, especially the perfectly-seasoned potatoes. The fresh fruit was a nice touch and the orange juice tasted like it had been squeezed fresh that morning. 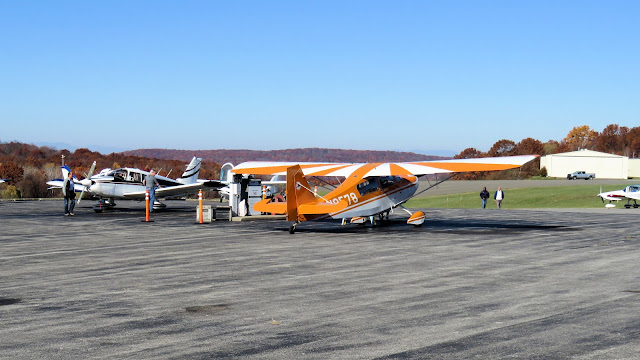 Aircraft were lined up on both sides of the fuel island, reminding me of a wedding buffet line. Airplanes have to eat too, and the fuel farm was doing as brisk a business as the restaurant. At $3.99/gal, the fuel was a definite bargain for the metropolitan New York area and many were taking advantage of it. (It might be a bit of a stretch to call Lagrangeville "metro NY", but the northbound commuter rail line out of NYC extends to nearby Poughkeepsie.) 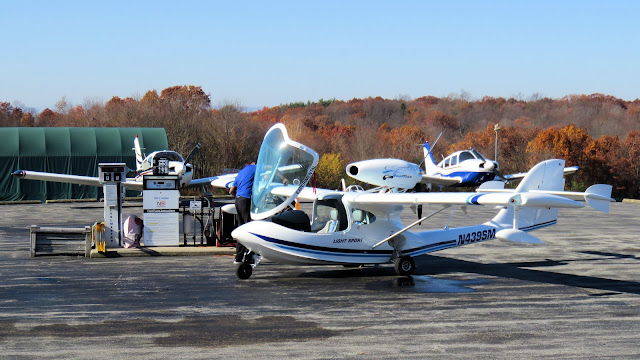 The SeaMax experimental amphibian caught my eye after the previous week's adventure in the Searey. 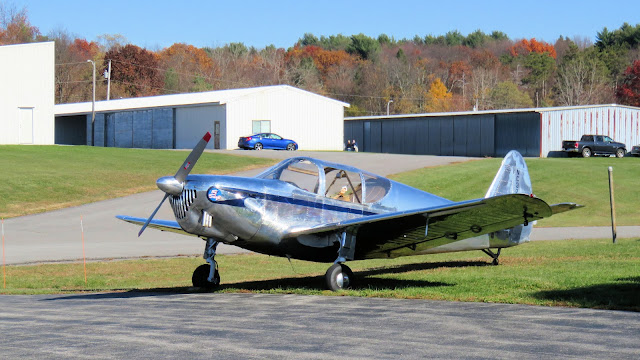 Children were pressed against the fence separating the outdoor dining area from the ramp, watching with rapt fascination as a wonderful diversity of aircraft came and went. During our short visit, it was clear that Sky Acres is a favorite destination of those who love airplanes regardless of whether they arrived by air or ground. On the website, directions to the restaurant are given as, "Simply follow the planes". (A street address is also provided for the more literal-minded.) 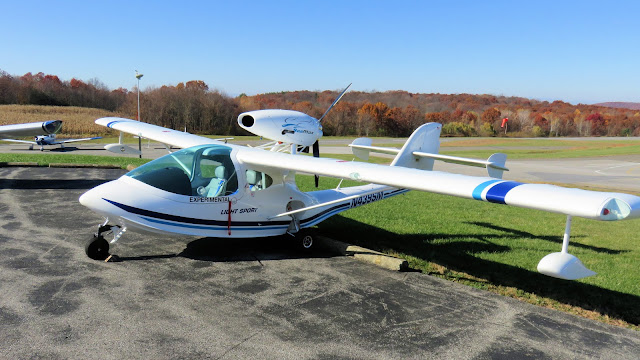 After lunch, Ed and I paused to examine the SeaMax. The owner came running over, excited to give us a tour of his recent acquisition. When I mentioned my recent ride in the Searey, the owner commented that the SeaMax was more comfortable for "tall people like us." It certainly looked roomier and I have no doubt that it is a lot of fun. 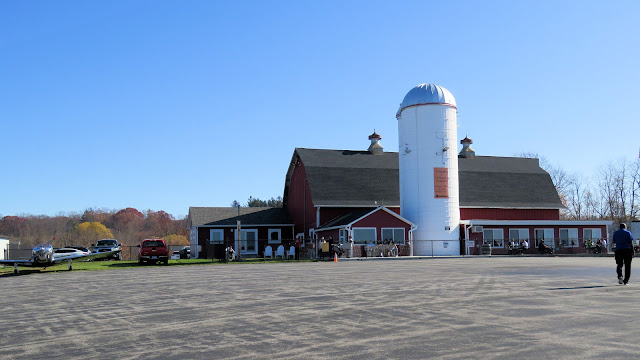 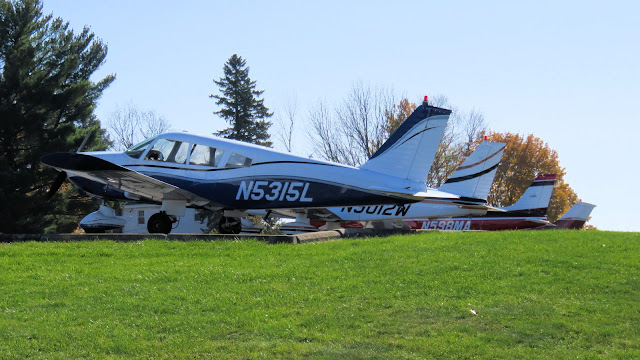 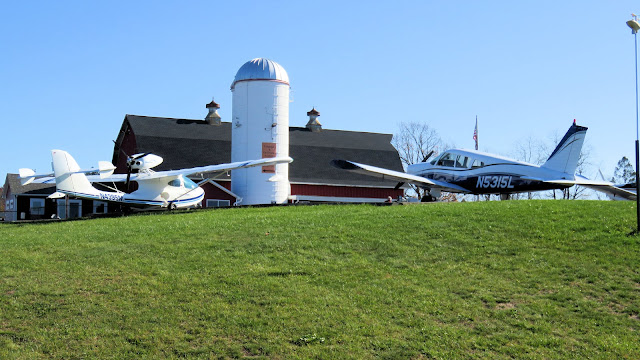 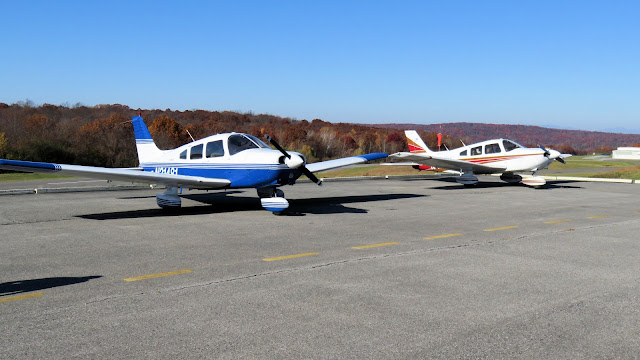 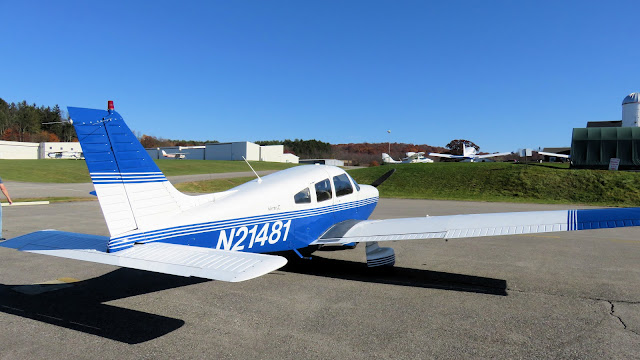 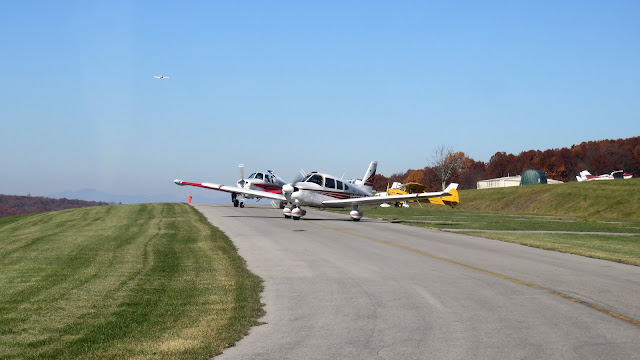 After landing at Sky Acres that morning, I saw that I had a text from Erik, one of the air traffic controllers at Rochester. "Working this morning and saw your tail headed down to 44N...It's one of the best airports in New York and among the best I've ever been to. Hope you have a great time down there and a safe flight!"
Erik was absolutely right. Sky Acres is a really cool place and I am disappointed in myself for taking so long to make my first visit.
Priceless
"Cherokee Four Eight One, Syracuse Approach, welcome back." It was the same controller from earlier that morning. Once we were both checked in, the question came. "How much does it cost for pancakes for the two of ya?" Translation: How much money did you waste by flying two airplanes most of the way across New York state just for breakfast? Ah, the obscure economics of breakfast aviating.
I paused to see if Ed had a ready answer. When the frequency remained quiet, I offered that "We could calculate it, but then we'd actually know the number."
The controller chuckled. "Probably best to leave it unknown, then." Frankly, given perfect weather, a wonderful destination, excellent company, and great food, the real answer to the controller's question was "priceless".
The next aircraft to call Syracuse requested the overhead break to Rome.
"That depends," responded Syracuse Approach. "Are you Marine Corp?"
"Nope," answered the pilot, slightly defiantly.
"Then...unable," answered Syracuse. There was a beat of silence on the radio before Syracuse Approach came back on. "Just kidding. Stand by for a vector to the initial." Syracuse was on a roll that morning. Traffic must have been light. When the exchange was done, Ed and I cancelled flight following.
"Cherokee Four Eight One, radar services terminated, squawk 1200, frequency change approved. There's no traffic observed between you and Sodus except for your buddy about five miles ahead."
"Thanks for another priceless morning," I signed-off, finally giving the controller an appropriate answer to his earlier question.
Logged by Chris on Sunday, November 08, 2020