After my discovery a week prior that starlings had taken up residence in Warrior 481's engine compartment, I shooed the (living) birds out of the airplane and replaced the dislodged bucket intended to block the circular opening in the cowling. At the time, I had no way to further remedy the situation. 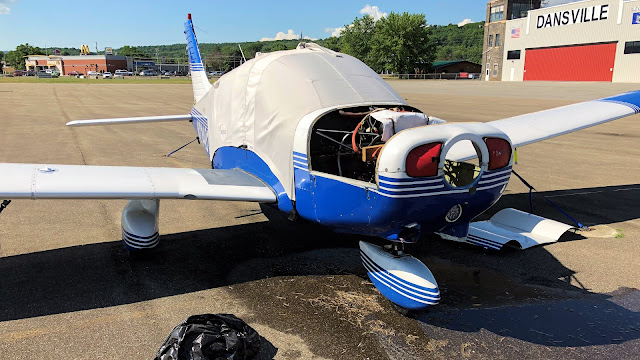 Kristy and I returned on the following Saturday to clean up the engine compartment. After all, someone needed to do it and when Ray has time to install the engine, I would rather he spent his effort on the technical work than cleaning up bird shit.

To be clear, starlings are awful tenants and sloppy engineers. Some of the nesting material -- twigs, dried grass, a few candy wrappers, and one cigar wrapper -- was actually incorporated into a nest, but much of it was simply scattered everywhere. There were two dead birds lying in the bottom of the cowling, one of them obviously a baby that had been pushed out of the nest. Bird droppings were everywhere, mostly on the lower bowl of the cowling, but also on the engine mounts and places sensitive to corrosion. A foul smell permeated the compartment.

I removed what I could manually, including the dead birds, then scrubbed everything down. The most satisfying moment came when I returned with a full bucket of clean water that I sluiced into the lower bowl, flushing the remaining hard to reach nesting materials out the bottom of the cowling (photo above). In its wake, everything was clean again.

By purging the mess I purged a little bit of the stress I have been carrying at the same time. Kristy spot cleaned bird droppings accumulated on the airframe while I blocked up all the holes in the cowling again. I stretched a bungee cord around the back of the bucket to prevent it from being knocked inside again.

Nesting season might be over, but I am taking no chances. Just say no to squatters.
Logged by Chris on Saturday, June 20, 2020