Holiday Road: On the Tail of the Dragon

Time To Spare, Go by Air

Sunday morning, July 21. It was the second day of our vacation and we awoke at my Dad's place in Knoxville, TN. Not a bad place to be, but we were expected elsewhere.


Specifically, we were supposed to be at a rental house in Robbinsville, NC where Kristy's immediate family had congregated for our annual SurnameFest (edited) vacation together. Weather the previous day resulted in flight delays that necessitated a diversion to Knoxville a mere flight hour north of our destination. "Time to spare, go by air," is the old chestnut that Ray, the owner of the Le Roy Airport, used to trot-out with some regularity.

Translation: travel by General Aviation is super convenient...until it's not. Frankly, things just did not go our way on July 20 between the ship closure and the weather delays. But at least we got a visit with Dad out of the situation, which I consider to be a huge positive.

So what happens now? 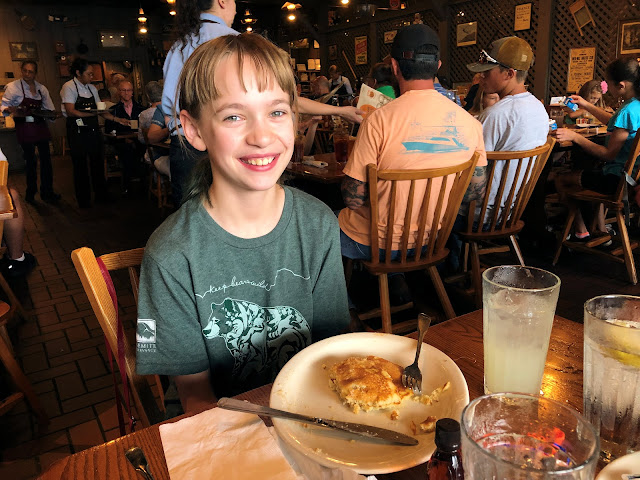 Dad, Carol, Kristy, The Bear, and I had breakfast at a Knoxville Cracker Barrel. The Bear's disposition improved markedly with a good night's sleep and a belly full of pancakes. In fact, I don't think that she scowled or glared at me again for the rest of the trip. Those must have been some good pancakes. Or maybe it was successfully solving the ubiquitous Cracker Barrel peg game twice in one sitting. Regardless, it was a good morning.

Low clouds sat atop the hills ringing Knoxville and the weather forecast looked rough for the next couple of days. We accepted Carol's offer to borrow her Subaru Forester to complete our journey to Robbinsville while Warrior 481 remained tied-down and under cover at Knoxville Downtown Island Airport.

There was just one catch...


The Tail of the Dragon

The shortest, most "direct" (relatively speaking) route to SurnameFest was via a stretch of highway known as the Tail of the Dragon. US129 is a two lane highway that twists through the Smoky Mountains and connects Tennessee to North Carolina. Claiming to be "America's number one motorcycle and sports car road", the Tail of the Dragon is an eleven mile portion of US129 notoriously featuring 318 curves as it climbs up and over Deals Gap on the Tennessee / North Carolina border. Many of the curves are marked with speed limits of 15 to 20 MPH, are steeply banked to prevent vehicles from sliding off the side of the mountain, and have names like "Copperhead Corner", "Beginner's End", "Gravity Cavity", and "Wheelie Hell". Even the straightaways are capped at 30 MPH and 18-wheelers are banned (though apparently the occasional trucker sneaks through on his own personal "Kessel run"). Total elevation gain is just shy of 1100 feet. Talk about nap of the Earth flying.


Being poorly rested, driving an unfamiliar car, and having my family on board made for a stressful ride. Their discomfort with the route was palpable. Though my southeastern-Michigan aggressive driving tendencies put me consistently over the speed limit, I was not fast enough for the adventure seekers on their sport bikes looking to blaze through at top speed. It was eleven miles of the most active driving I have ever done and, to my surprise, I found myself with both hands on the wheel. I never do that.

When it was done, Kristy and The Bear declared that they had no desire to drive that way again. Ever. 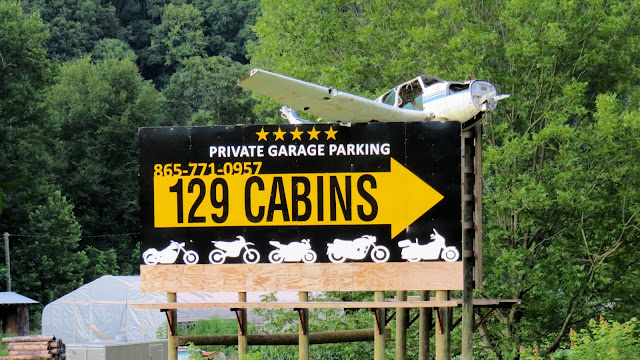 An unusual landmark near the house was a sign on US129 advertising nearby cabins that inexplicably incorporated a wrecked Beechcraft. (Maybe they were crash pads?) From there, we turned onto a "driveway" that climbed steeply up the mountain. As the driveway pitched ever steeper, I had an uncontrollable urge to push the nose of the Subaru over. If we were in the Warrior at full power and the same pitch attitude, the tail would have been buffeting while the stall warning horn shrieked.

"This can't be the right place," I verbalized as we made the uncomfortably steep climb at stall pitch in our Subaru-turned-mountain goat. Abruptly, the driveway leveled off at the house and, just like that, we had arrived at SurnameFest. 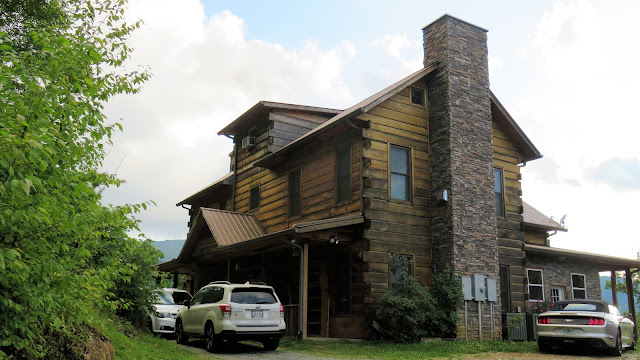 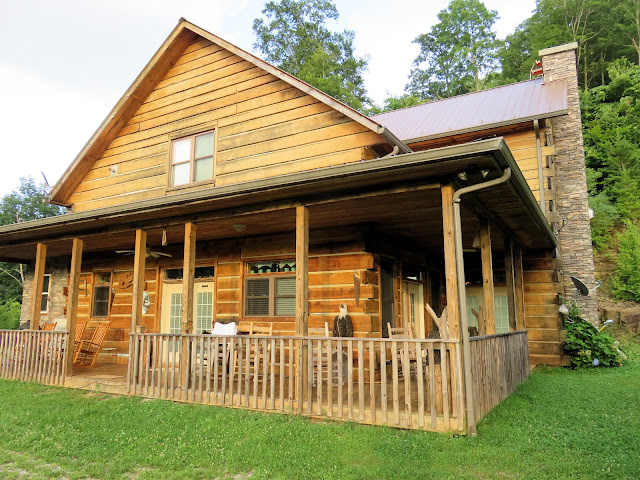 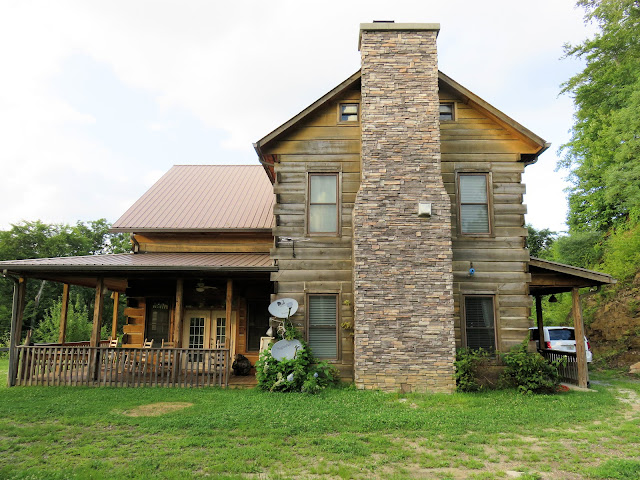 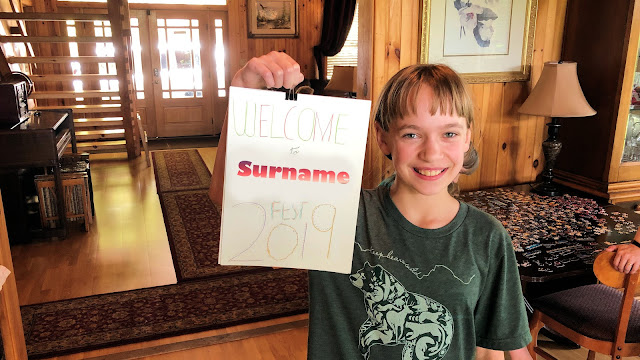 The house was lovely. Spacious, well-appointed, and clean. It was one of the better SurnameFest houses we have rented to date. The one from Vermont is still my favorite, mostly because it was so weird (weird in a good way as opposed to the place in South Carolina that was weird in a "why the Hell did they do that?" kind of way).

The owner of the house, Billy, took an usual path through life. At one point, he worked in the Piper plant in Vero Beach building Cherokees. (Considering the year, I wonder if he helped build N3470R?) As a teenager, he ran away with a carnival and, at some point, made a sufficient fortune to own two of them. Not surprisingly, he has a soft spot in his heart for carnival totems. A bumper car marks one of the entrances to the property. A blue Ferris wheel seat is prominently placed outside the house.

And, of course, there is the Ferris wheel. 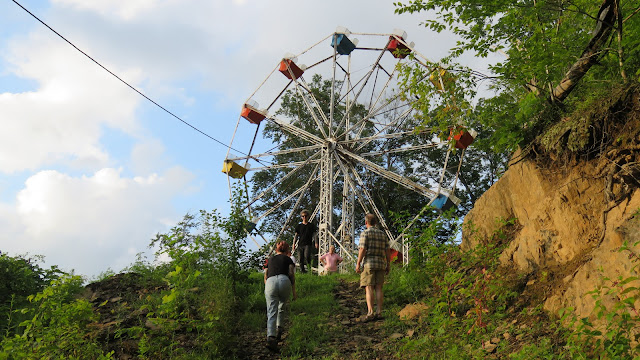 Higher up the mountain, perched above the house, sits an intact Ferris wheel. It was a treacherous scramble up a steep two track path to reach it. The amount of effort that Billy must have invested in dragging that thing up the mountain suggests to me that the man has an overdeveloped sense of whimsy. I completely respect that. 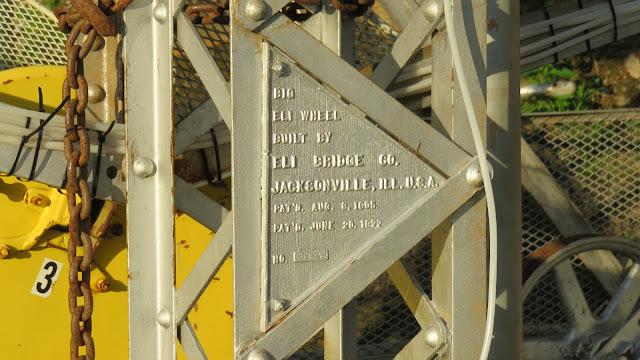 It was a Big Eli Wheel, built by the Eli Bridge Company of Jacksonville, IL (incidentally, they are still in business and still making carnival equipment) with patents dating back to 1905. The Big Eli Wheel was specifically built for travelling carnivals and is iconic of the breed. 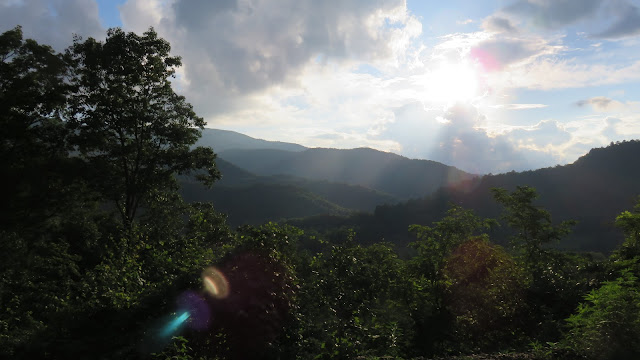 When not goggling at the Ferris wheel on the mountain, the views were absolutely magnificent. We sought a remote location for SurnameFest this year and I think that we succeeded.

(When I took this picture, JJ Abrams was standing off to the side shouting a Walkenesque, "It needs more lens flare!") 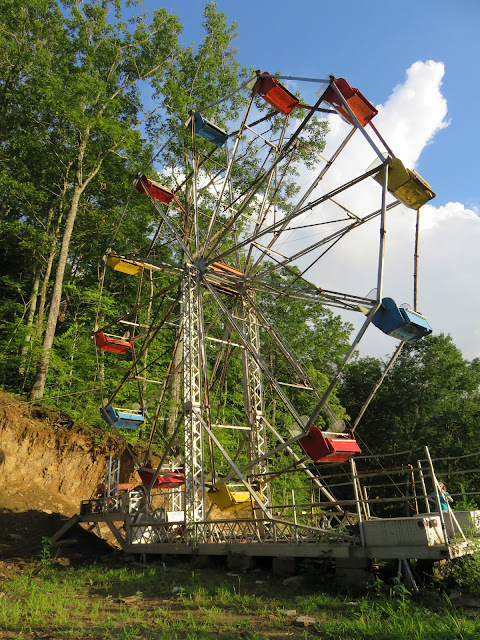 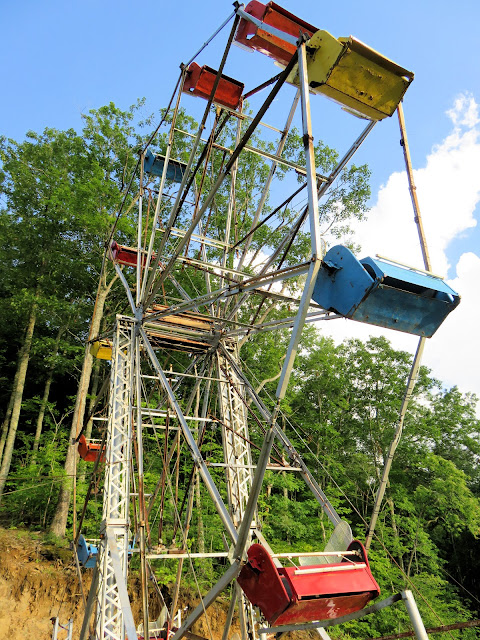 The wheel is lighted with LEDs at night. Screened by trees on the slopes of the mountain, we were never able to spot the wheel from anywhere beyond the property, not from the road nor from any other spot we visited in Robbinsville. This was not a local landmark, a beacon set high on the mountain to uniquely mark it from all others. From what I could tell, this was a hidden artifact specifically placed there by Billy for his own enjoyment. That probably says everything about Billy that anyone needs to know. 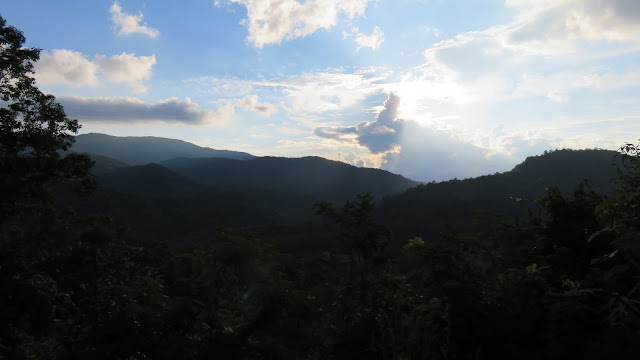 As the sun set on our mountain retreat, we enjoyed being surrounded by family once again. We had faced the Tail of the Dragon, reunited with family, and had the entire week ahead of us. SurnameFest had begun!
Logged by Chris on Sunday, July 21, 2019