Airborne on the first day of a week-long family vacation.

Whether the Family Truckster goes on wings or wheels, when the first stop on a journey involves a heat advisory, a grumpy Bear, and a balky ninety-four year old laker, it is probably best to expect the unexpected.


I felt a pang of guilt as we entered the clouds, staying true on the direct course to Cleveland.

The other Williamson Flying Club members changed direction and altitude to remain free of cloud layers looming over Rochester. Ed swung to the north and Paula to the south, both seeking a clear passage forward. From the cockpit of Warrior 481, I monitored their positions in ForeFlight.

I do not normally file IFR for club trips because, if I cannot make the trip safely VFR, then I should not expect VFR-only club members to push into unfavorable conditions either. But this was no ordinary club trip for us. Kristy, The Bear, and I were embarking on our annual summer journey to SurnameFest (renamed in keeping with my policy of not using last names in the blog). This year, we were meeting Kristy's family for a week in Robbinsville, NC via Western Carolina Regional Airport (KRHP) in Andrews.

Guilt notwithstanding, filing made sense. Barring a line of thunderstorms, we were pressing forward no matter what. If the weather was foul enough to turn Ed and Paula back (unlikely, but not impossible), we would still continue on. Also, by filing, I guaranteed that Warrior 481 would appear on FlightAware for any inquisitive family members tracking our progress. Finally, when flying in the vicinity of a Bravo, sometimes IFR is just easier in that it eliminates concerns about busting airspace.

I filed and traversed the gauzy heavens with impunity while the others chose their paths with greater care. 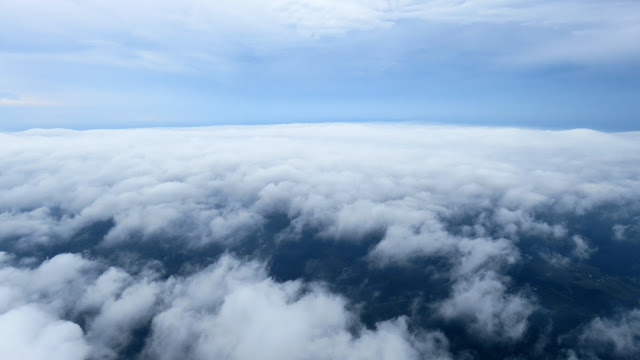 Warrior 481 spent a few minutes climbing through the clouds before leveling on top. When we found an edge to the deck, I reported it back to Rochester ATC, who dutifully let Paula know that an end to the clouds was just ahead. Regardless of any guilt that I carried, all three aircraft emerged into clear air between Rochester and Buffalo without issue and continued on their way direct to Cleveland. Despite his more circuitous route, Ed's faster Archer II still made it to the destination before us.

Burke Lakefront Airport (KBKL) in Cleveland is one of my favorite destinations. To my mind, the scenic approach along Lake Erie, the proximity of downtown, and the abundance of interesting destinations along the waterfront make this a great General Aviation destination.

This story really begins last year, in September 2018 ("Thirsty"), when I led a group of WFC pilots to Cleveland to visit the USS Cod (a restored World War II submarine) and the Steamship William G. Mather (a restored 1920s Great Lakes freighter). After a fascinating exploration of the USS Cod, we were disappointed to discover that the Mather was unexpectedly closed due to a fire the day before. It just seemed like a one-off instance of bad luck and we vowed to return. Of course, the overshadowing bit of bad luck that day was a fuel burn so radically increased that it almost put me into a fuel exhaustion scenario while airborne.

Ed organized the 2019 return trip and happened to schedule it on the same day that SurnameFest was set to begin. I wanted to bring some closure to 2018 by finally touring the Mather, I had always wanted to introduce Kristy and The Bear to Burke Lakefront, and the detour through Cleveland only added 40 minutes of flight time to North Carolina. It seemed straightforward to me to include the WFC trip to Cleveland as the first leg of our journey to SurnameFest. Win-win, right?. Nonetheless, The Bear was grouchy about what she viewed as a delay to reuniting with her grandparents and her wacky aunts and uncles. This became something of a theme for the day.

It would be my fourth visit to Burke Lakefront and Ed's second while, for Paula, the excursion represented her first landing in Cleveland and her longest cross country flight to date. While old news for me, the trip was a big deal for the newest pilot in our group. As a new aircraft owner, I would have balked at flying into a place like Burke Lakefront. The fact that Ed did it during his first year of ownership and that Paula was following suit is fantastic. They both deserve a lot of credit for exercising their wings.


A trainee was working our sector of Cleveland Approach that morning and she was neither as responsive nor clear with pilots calling for services as she could have been. If it was mildly annoying to me, it made the trip more challenging for Paula than it had to be. But Paula hung in there.

On my second foray to Cleveland in 2016, I was told to expect a visual approach, then asked to intercept the localizer to runway 24R. That resulted in a bit of a scramble in the cockpit for the localizer frequency - my fault for not being prepared.

This time around, I was also told by the trainee controller to expect a visual approach. When she asked me to intercept the localizer, I was ready with the frequency set and the Morse code identifier verified. Then, a few minutes later, a new controller came on frequency and flat-out cleared me for the ILS-24R approach.

I still consider myself an IFR newbie. In my limited experience, most ATC facilities are very up-front with pilots about their expectations on flying a visual versus a specific instrument approach procedure. It was amusing to me that Cleveland snuck this approach in under the radar (so to speak). I am happy that I was prepared for the task.


Just an observation: neither Kristy nor The Bear seemed as smitten with the view on final approach as me, but Kristy was willing to take a few photos as we neared the ground.


I have historically avoided the FBO on the field (Signature) due to their high costs (fuel is roughly $7/gal). However, because of our travel profile, it made sense to buy fuel at Lakefront and I decided that it was worth paying for the convenience. The others made similar decisions and, before long, three aircraft from the Williamson Sodus Airport were parked wingtip to wingtip on the Signature ramp. 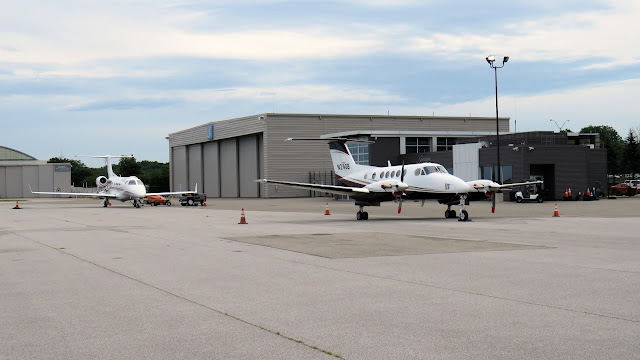 It was hot. Cleveland baked in an intense heat that was only slightly ameliorated by a residual overcast. A heat advisory was in effect for the day. Because of it, I actually ran take-off performance numbers for the Warrior at Lakefront to ensure that we could claw our way airborne when it was time to continue on to North Carolina. I need not have worried, Lakefront has plenty of runway for even the hottest of days. 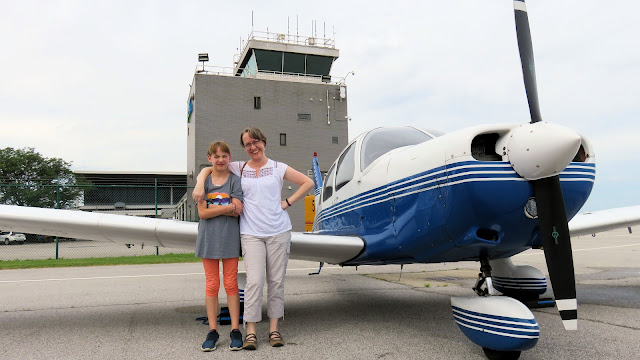 Frankly, every one of my visits to Burke Lakefront has been on an oppressively hot day. Despite the added nuance of a heat advisory, the temperature did not seem much worse than previous visits. Instead of solely associating Drew Carey with Cleveland, I am now hardwired to associate heat and humidity with the city, too. 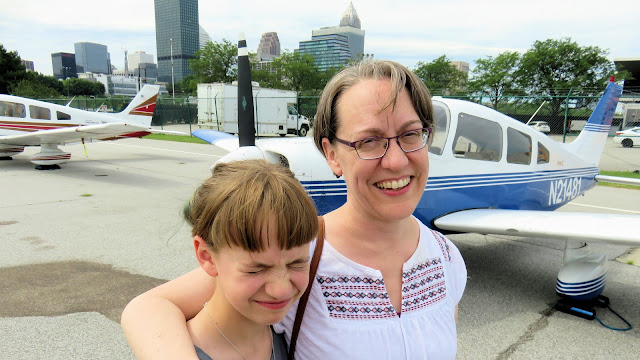 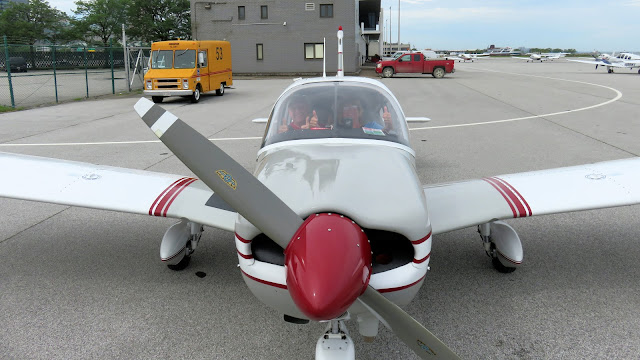 Those are thumbs way up from the crew of Niner Four Romeo. Paula was thrilled to have navigated to Burke Lakefront. 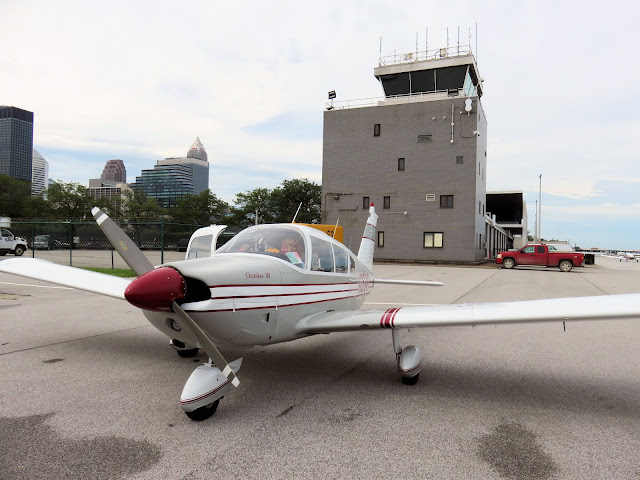 Airplanes are meant to go places and it was very exciting to see Paula making such excellent use of hers.


It turns out that, in addition to parking and fueling, line service at Signature is also adept at capturing well-framed group photos.


Momentarily setting her scowl aside, a wild Bear prowled the Signature ramp beneath the watchful eye of Lakefront Tower. I am pleased to report that no Pipers were mauled in the creation of this photo. 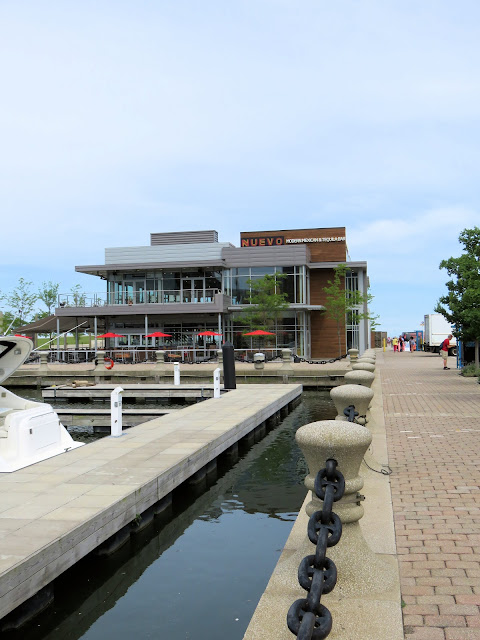 Ed and I enjoyed the neo-Mexican cuisine at Nuevo in 2018 and decided to return. It may have been one of the only lunch options along the Cleveland waterfront, but the food was so good that that limitation was really not a factor in the decision. 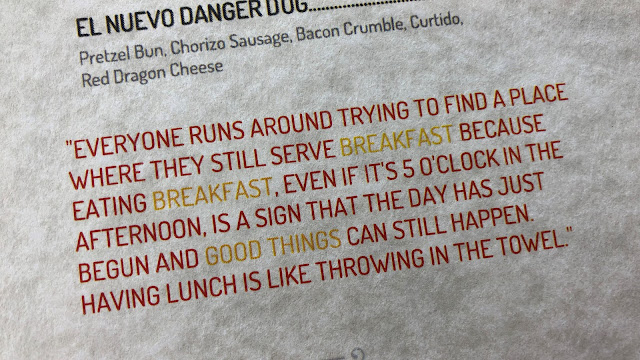 I enjoyed this sentiment from the Nuevo brunch menu. 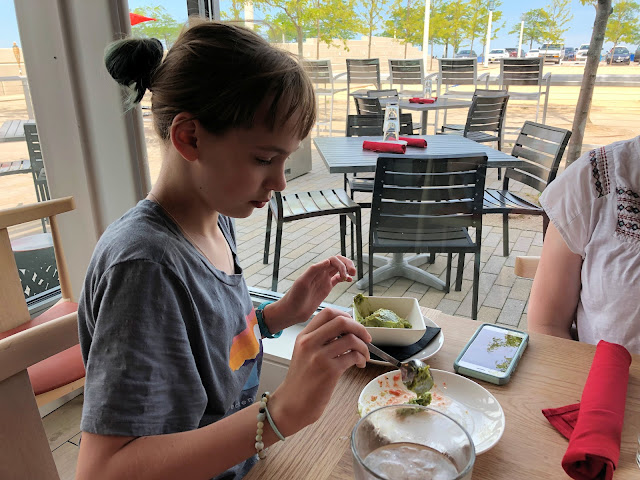 The Bear was won-over by delicious house-made guacamole. Now that she is nearly in full-on teenager mode, she devoured her lunch and part of Paula's. This was done with Paula's encouragement, of course. I would never falsely imply that The Bear steals food from the plates of my friends during club fly-outs. Never. Not even for humorous effect.

I think Nuevo was a success! There were many clean plates around the table, some big smiles, and The Bear's scowl disappeared for the time being. 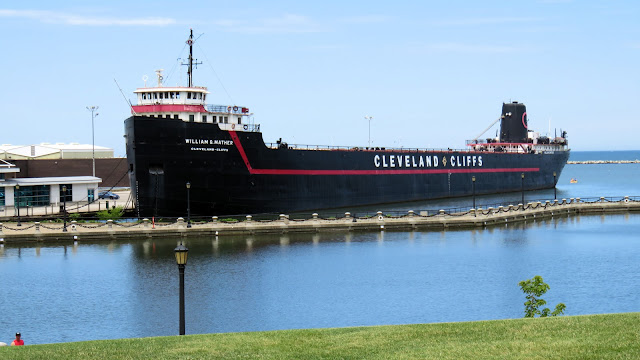 There it was, the white whale...er...Steamship William G Mather. Finally, we would manage to explore it from stem to stern. Anticipation ran high, especially for Ed and I who had already made the trek only to literally find the door closed in our faces. 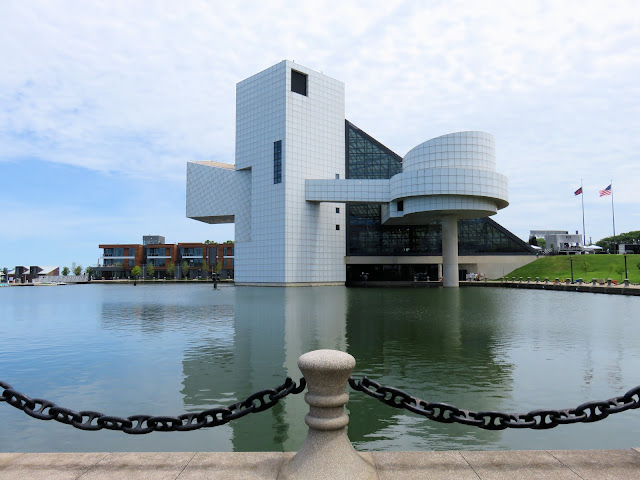 Backside of the Rock & Roll Hall of Fame. 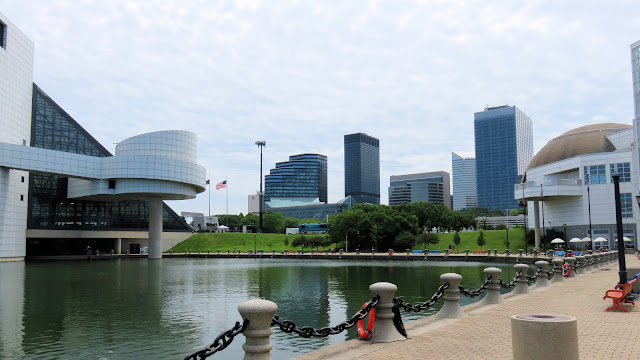 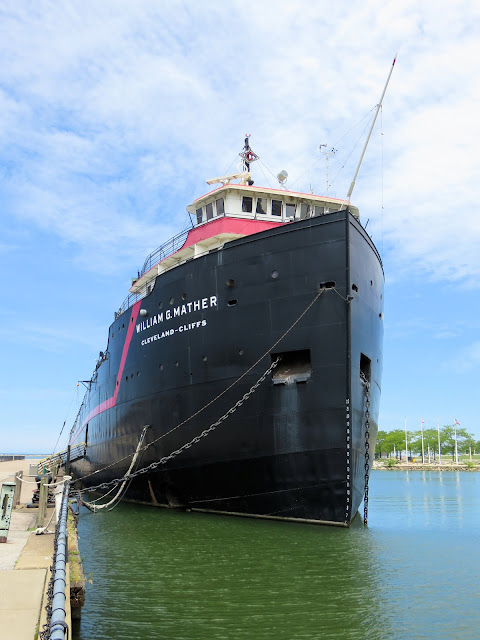 Approaching the ship, I was struck by a profound sense of deja vu, as though I was reliving last year's walk to the Mather only to discover that it was closed. Obviously, the outcome in 2019 would be very different than last year.


Except that it wasn't.

CLOSED??! AGAIN??! Due to the heat advisory?

Fool me once shame on you, but fool me twice, shame on...oh...DAMMIT!

At least we enjoyed a terrific lunch and camaraderie during our stop in Cleveland. Clearly, the heat advisory impacted more of our trip than mere take-off performance in the Warrior. 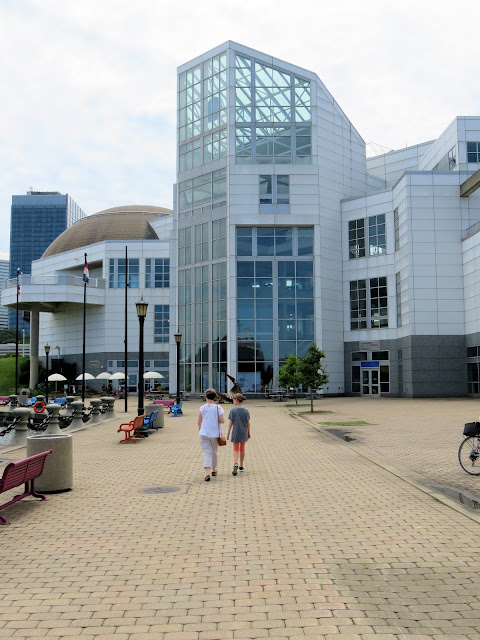 The others decided to visit the World War II submarine, USS Cod. Having toured the Cod twice in the past, I decided that my family would depart Cleveland for North Carolina. This decision was enthusiastically endorsed by The Bear. 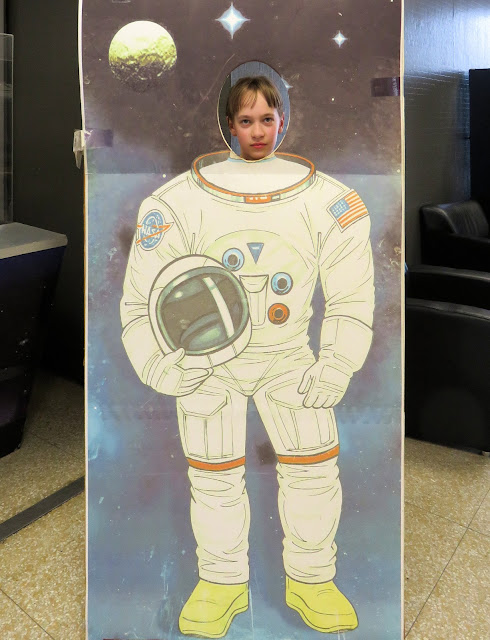 Aw... Who's a gwumpy widdle astronaut? The Bear is! 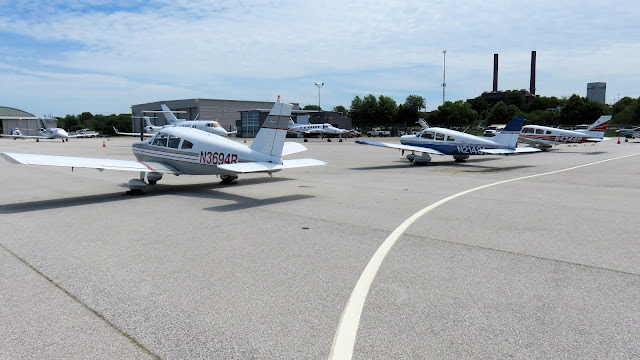 Signature is expensive, but the staff were wonderful and the air conditioning was absolutely heavenly after Cleveland's blast furnace climate. After launching, we would discover that the heat diffused upward into the higher altitudes. At 6,000 feet, the outside air temperature was still 28°C (82°F). It is not often that the air vents blow warm air in cruise. 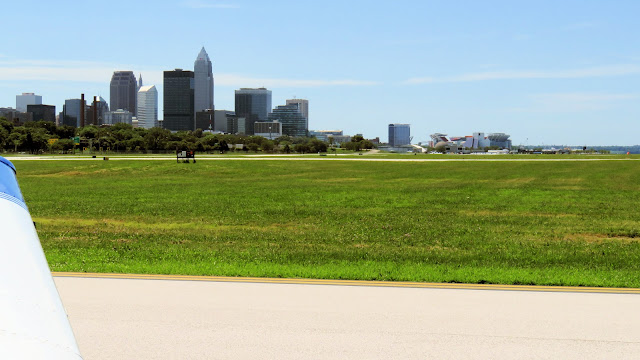 "So...that was Burke Lakefront." I remarked anticlimactically as we waited, sweltering in the Warrior, for IFR release at the end of runway 24R.

Though I could not see her, I imagined The Bear scowling at me from behind.
Logged by Chris on Saturday, July 20, 2019