Ghost in the Machine


The roll servo was installed in the spar box under the back seat. It simply clamps directly to the existing cables that drive the ailerons.


There was a delay receiving the correct bracket for mounting the pitch servo. That would eventually mount all the way back in the empennage next to the emergency locator transmitter (ELT, the orange box in the photo above). I teased Jake about having to crawl back in there to work, but he revealed that it was actually Jeff, the owner of the shop, who undertook that particular chore. Hats off to Jeff!


Sometimes, things look worse before they get better.


By March 9, Jake had all the trays positioned and wired for the radio stack. Completion was nearer at hand than this photo makes it seem.


Later that same day, Jake had the center stack complete and the 48 year old King KX-170B radio slid into place. I have literally waited 17 years for this thing to die. It simply refuses to acknowledge its own obsolescence. Why would I spend a few thousand dollars on a new navcom radio when this one works perfectly well?
I used to boast about having the ugliest KX-170B in operation, but Jake exercised his artistic side and repainted it. It actually looks pretty good now and the new coax connecting it to the antenna has eliminated background noise that has been apparent for the last five years. 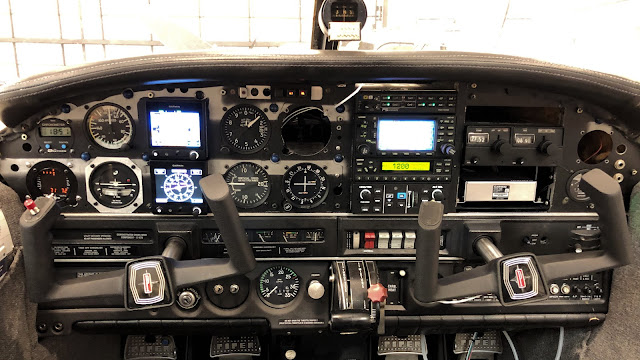