Rush Hour
"Cherokee Four Eight One, what's going on at Sky Acres today?" The query came from New York Approach.
I played dumb. "I'm just looking for breakfast," I responded somewhat disingenuously. I knew that Warrior 481 was the first in a string of six aircraft from the Williamson Flying Club tracking inbound to Sky Acres. Via ADS-B, I could see airplanes converging from other directions as well. To my mind, it was a race with the non-WFC aircraft for parking and outdoor seating at Hangars Café.
"Well, you have several aircraft behind you and multiple targets converging on the airport." New York signed off with a well-intentioned caution about the traffic density.
With Kim and Scott aboard Warrior 481, we slipped into the pattern between a pair of RVs. From the pattern, I was gratified to see that the main transient parking ramp at the terraced airport was mostly empty.
The plan came together by text over the previous days. With warm weather (finally!) and good flying conditions expected for Sunday, we planned to arrive at Sky Acres around 11:00 for lunch. That morning, Scott warned that another group of pilots from the Northeast were also planning an 11:00 am arrival. He came by this knowledge thanks to that great intelligence-gathering tool: Facebook. As a result, we hustled out early in an effort to beat the rush and secure enough outdoor seating for fourteen people. Seeing us launch prematurely from Williamson Sodus, Tom, Ed, Brad, Paula, and Dan scrambled to get their airplanes into the air.
Our gambit worked. While I took care of the Warrior, Scott and Kim secured enough outdoor seating for our entire group.
How To Become a Pariah in One Brief Radio Call
Aircraft swirled around Sky Acres for some time after I landed. One Cirrus SR-22 pilot broadcast an intention to enter the pattern on a straight-in. This was met with derision on frequency from other pilots negotiating the crowded pattern. If that pilot got out of bed that morning with the goal of embodying a cliche, well, mission accomplished. 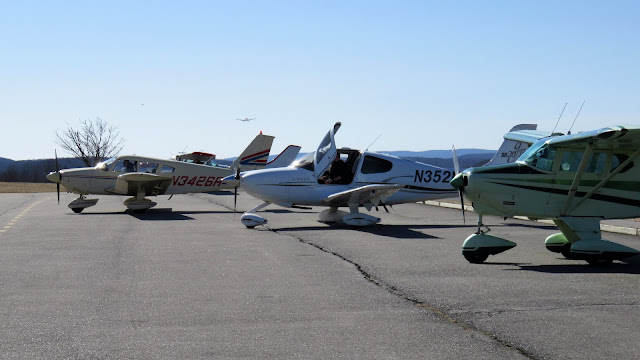 Eventually, we began to accumulate on the ramp, including Brad in The Cirrus and Tom in his new Cherokee, Two Six Romeo. I spotted Ed on short final and rushed to photograph his landing. 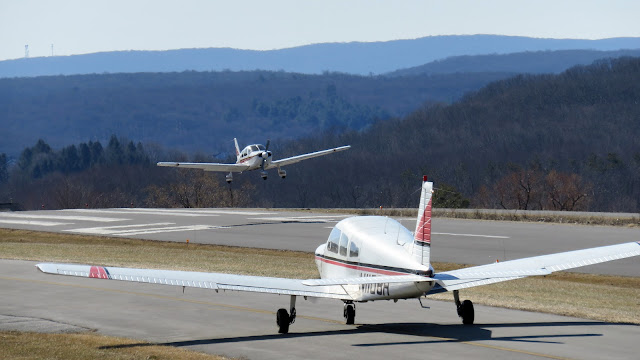 I caught Ed rounding out over the runway numbers in his Archer. 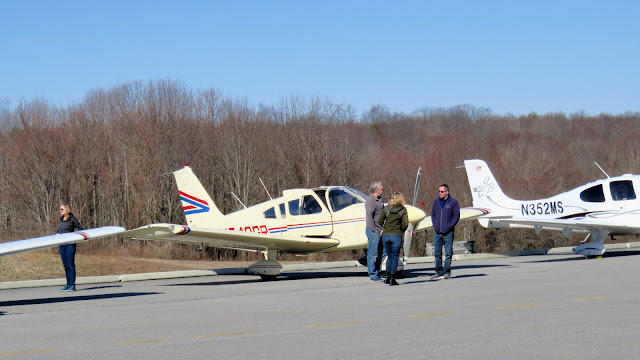 The newest aircraft in the fleet became the gathering point for the WFC pilots and their passengers. 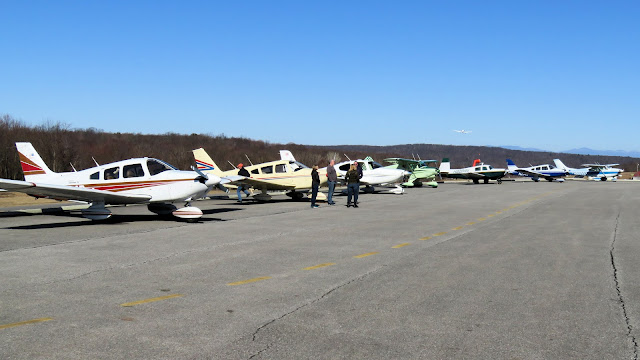 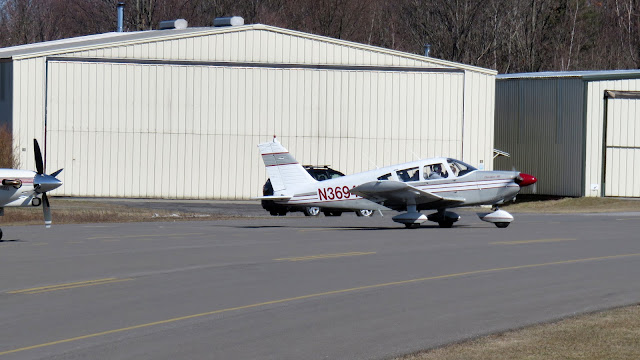 Our entire group landed safely, though Paula and Dan arrived last and were forced to park on a more distant ramp. 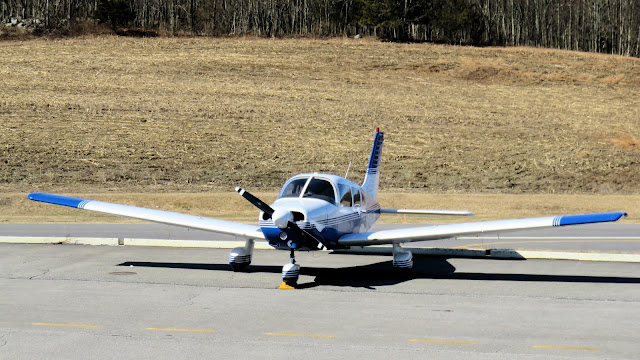 Really, all anyone wanted was an opportunity to fly somewhere with the group where we could do something. Sure, eating was not a particularly creative activity, but I verified that the Hangars Café at Sky Acres had outdoor seating available and that satisfied everyone's safety requirements. With temperatures in the mid-50s, it was very pleasant in the sun. I suspect that several airplane  winterization plates were removed that day.
An Outdoor Springtime Dining Experience 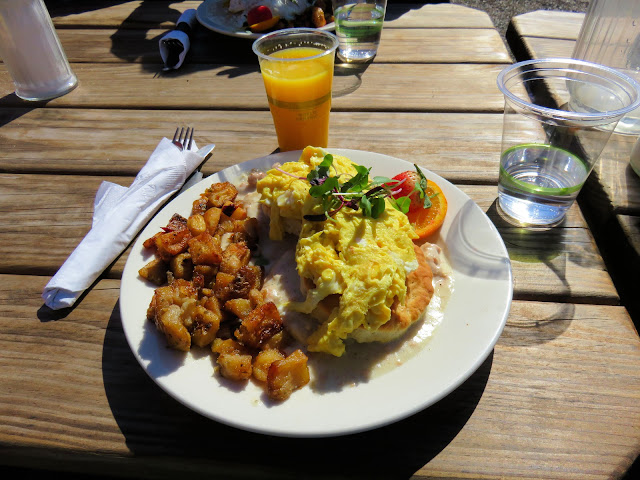 Much of the group ordered a late breakfast. Biscuits and gravy with eggs was an especially popular selection. My breakfast was delicious, particularly the potatoes. I even ate the green stuff on top. 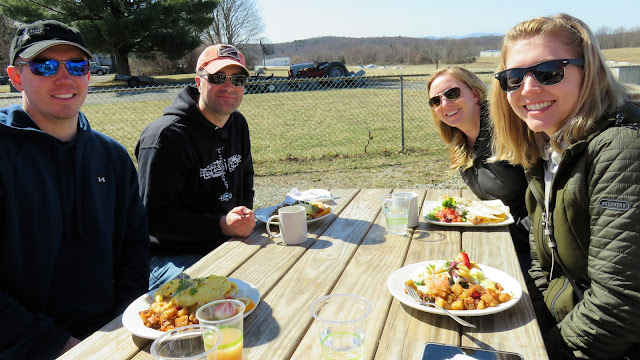 At the neighboring table sat my favorite COVID-pod: Brad, Tom, Alicia, and Melodie. Brad, of course, is master of The Cirrus and newly instrument rated. (Congrats, Brad!) Tom is a great pilot who insists that my presence on board his aircraft makes him "fly like a goober". (Not true.) Alicia is the graceful tamer of the elusive pneumatic snow unicorn. ("Right rudder!!") And Melodie seems so uncannily tapped into my personal neuroses that I often feel called-out by the things she posts. (Seriously...it's kind of unsettling.) 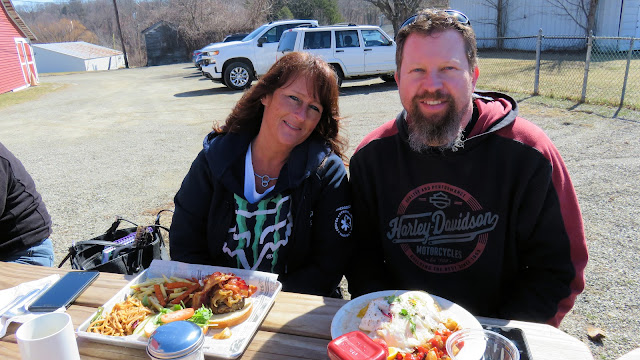 Ed (not pictured) and I sat across from Scott and Kim, both of whom are already vaccinated against COVID owing to their professions. Kim broke with the breakfast trend, but her burger looked good. 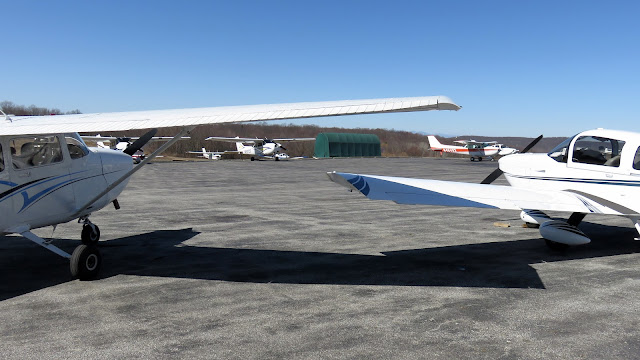 There was not much social distancing going on with aircraft on the ramp, however! 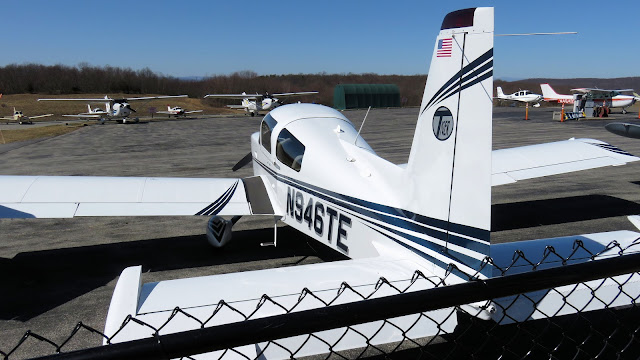 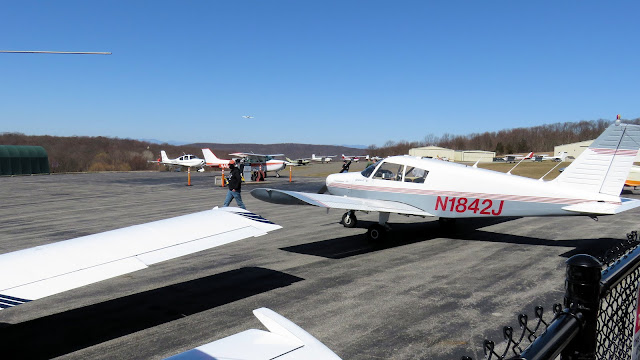 Surrender
We would have happily spent the entire afternoon chatting together, but we eventually surrendered our tables to those in greater need. 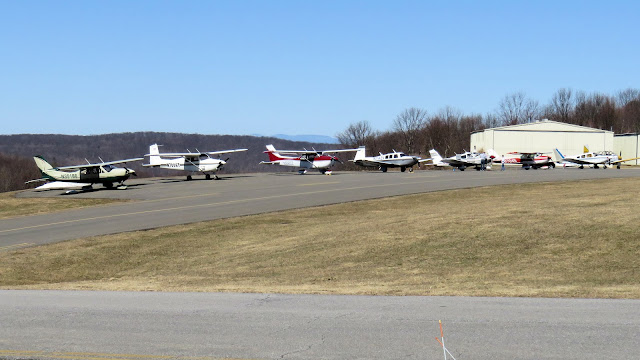 Mike B and his son made the hike to Paula's distant plane and taxied it to the fuel farm for her...just in case anyone thought that chivalry was dead. 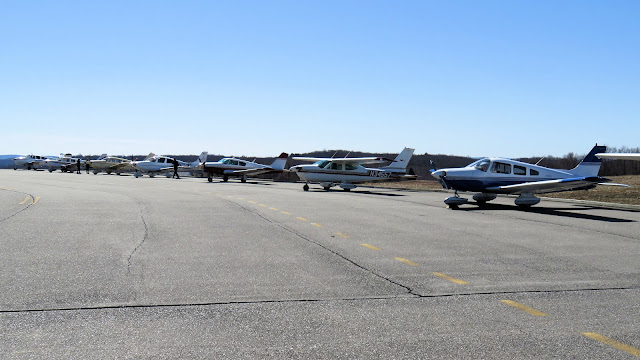 I caught one last shot of the ramp before clambering aboard Warrior 481 and going aloft.
Sun and Shadow
As part of my Official Autopilot Acclimation Program, I ran the autopilot for the entire round trip. I was amazed by its precision. We flew the exact reciprocal route back to Sodus and the breadcrumbs in ForeFlight for the outbound and return flights were perfectly overlaid. Neither Scott nor Kim seemed to mind that the computer flew us home. Then again, Kim never heard the story of the first test flight. 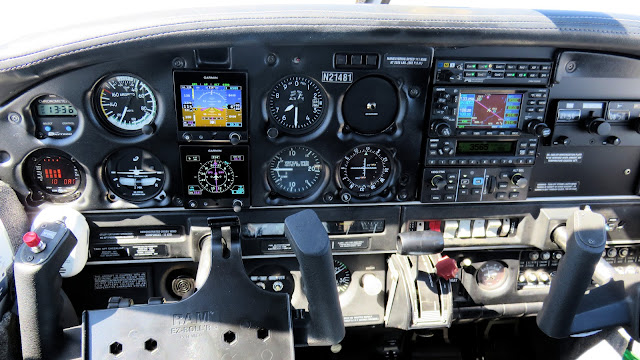 I repainted the instrument panel overlay the day before and apologized to my passengers for the faint aroma of "eau de spray paint" still lingering in the Warrior's cabin. 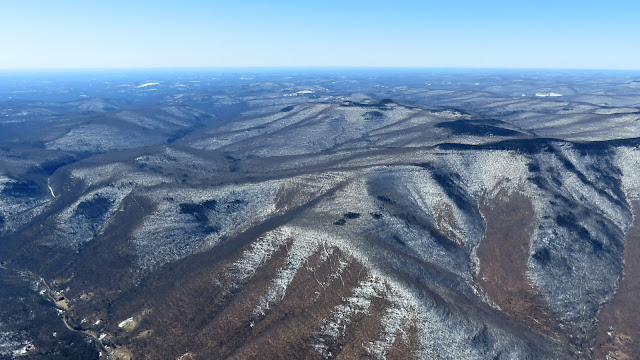 The Catskill Mountains presented an interesting sight as they passed beneath our wings. They were still snow covered except for the south-facing slopes presented to the sun. 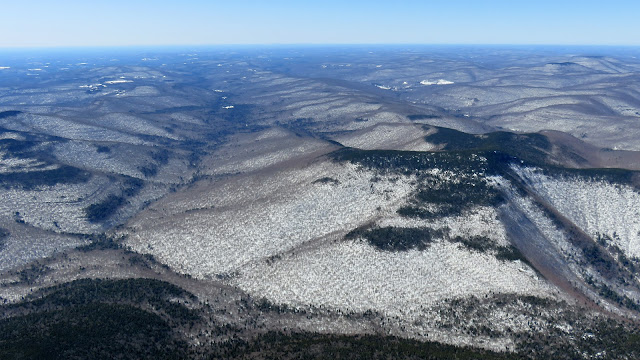 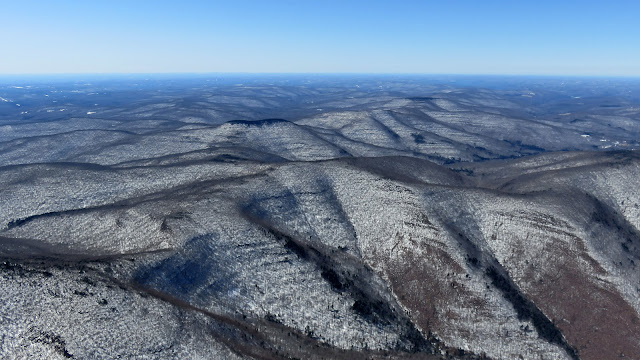 We may not be quite back to normal yet, but this fly-out with my friends felt like a step closer. It will get better.
Post Script: Normal?
We returned to Sodus in the middle of the pack. As we taxied toward my hangar, we spotted someone running along the taxiway up ahead.
"Is that Jamie?" I asked Scott.
The person stopped on the yellow line running down the center of our taxiway, turned his back on us, and bent over to present us with a fake moon.
"Yep, definitely Jamie," I answered my own question. It's always good to be welcomed on the return home.
Logged by Chris on Sunday, March 21, 2021