Plan A for Sunday morning was a flight from Sodus to Lock Haven, PA with the Williamson Flying Club. Several members were planning to fly south for pancakes, including Jamie and me in the Warrior. Unfortunately, a forecast for low clouds over central Pennsylvania ended that plan sixteen hours before the intended launch time.

Plan B was a short hop over to the Tailwinds Diner at nearby Fuzzy (Oswego County Airport, KFZY) for breakfast with the same crew.

Unfortunately, the Warrior had a minor airworthiness problem owing to an AD that turned my oil cooler hoses into pumpkins at the end of April; we were slow to catch it during the annual and the hoses need to be replaced before the airplane can fly again. In looking for available airplane seats for me and Jamie, I accumulated multiple offers of help, but Barry's was first.

Barry keeps a Piper Seneca and a 1946 Grumman Widgeon at Rochester and offered us a ride in the Widgeon.

We met him at Greater Rochester International Airport at 7:15 am. Though fog spilled onshore from Lake Ontario socking-in Sodus and Fuzzy, Rochester was far enough south of the lake to be clear of it. 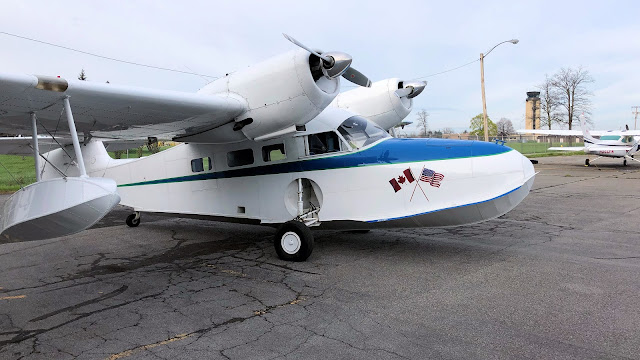 That was how Jamie, Barry, and I became the only club members to make it in to Fuzzy for breakfast that morning. And we did it in style; 1946 amphibious style. It was one of the best flying experiences I have ever had while the Warrior was grounded.

Two and a Half Tons of Fun

November Four Zero Two Echo is something of an icon in the Rochester aviation community. It was based here for decades before Barry acquired it, at one time belonging to Ray Hylan, founding father of aviation in Rochester (Hylan's mausoleum in Mount Hope Cemetery even bears an engraving of a Widgeon). It is usually granted premium parking at fly-in events and radio calls on Unicom frequently elicit anonymous "Hey, Barry!" responses.


Though it is the smallest of Grumman's World War II-era amphibious designs, the Widgeon was a behemoth to wrestle out of Barry's hangar that morning compared to the average Cherokee or Skyhawk. Still, with Jamie and I pushing and Barry steering with his custom-built tow bar, we had the Widgeon ready to go without much fuss.


Our plan was to fly to Fuzzy, check out the weather conditions, and land if able. I got the right seat for the outbound flight. 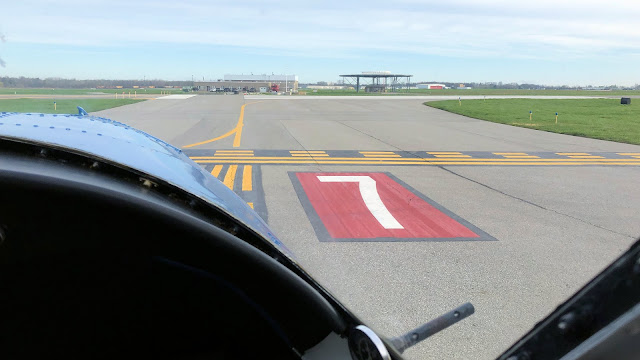 At the hold short line for runway 7, Tower was chatty with Barry. "I've never seen his face, but he knows me," Barry commented. Everyone knows you, I thought to myself. How could they not? 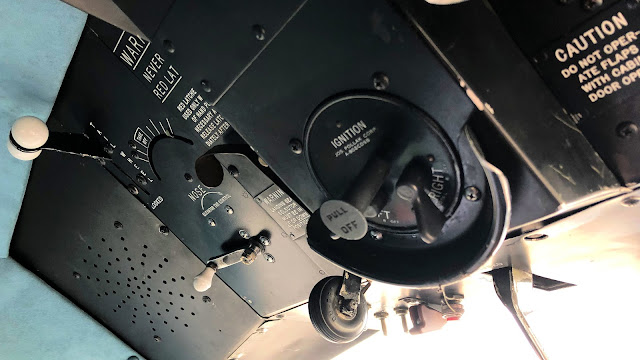 As Barry ran-up the Widgeon's engines, I was amused to note that the gear lever ended in a small tire. There was no mistaking the purpose of that control! The Widgeon rose majestically over the Rochester skyline, tracking solidly and smoothly through the air pointed eastbound toward Fuzzy. On climb-out, we passed just north of the University of Rochester.


As a sibling of the mighty Hellcat of World War II, the Widgeon felt every bit as solid as one would expect from an aircraft conceived and forged by the Grumman Iron Works. 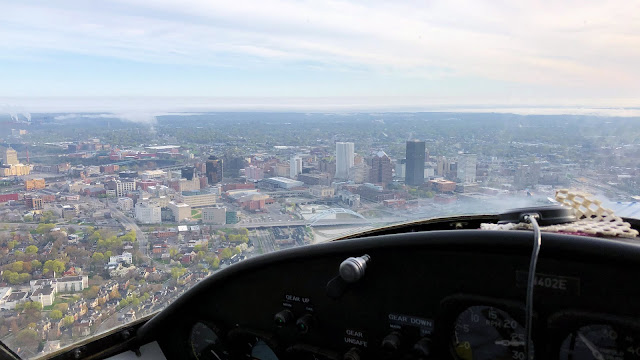 We enjoyed an up-close view of the Rochester skyline from 1900 feet. In the distance, a low stratus layer blanketed the waterfront. 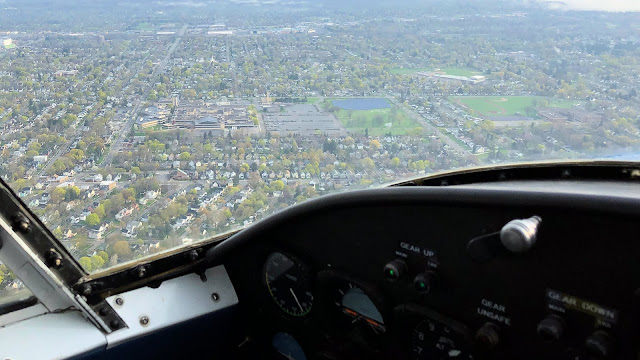 We passed just south of work. 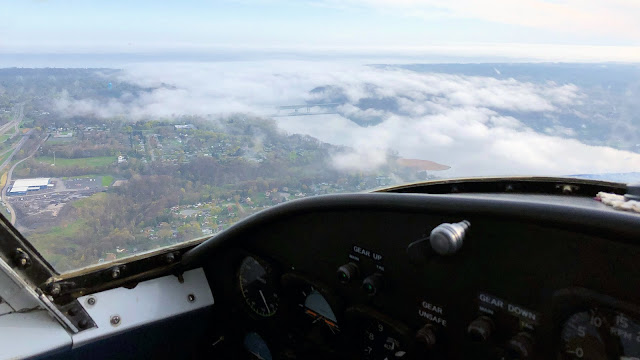 Irondequoit Bay often provides a path for lake fog to penetrate inland. This morning was a prime example. 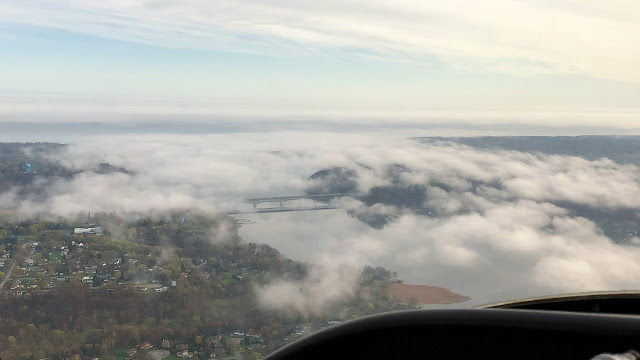 A mirror-like surface indicated dead calm conditions on the bay and revealed a phantom bridge span in reflection.


Along the way, Jamie happened to capture a photo of my neighborhood. 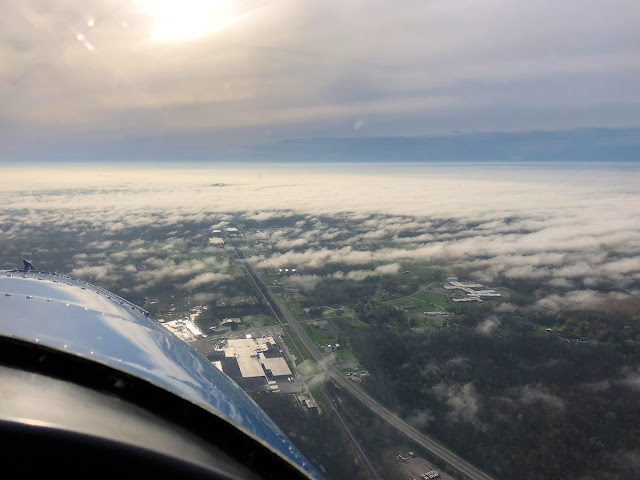 As we flew toward Sodus, the cloud layer thickened below. No one would be getting out of the Williamson Sodus Airport for breakfast that morning.


Barry turned the controls over to me and asked for a 360° turn. The Widgeon flew smoothly and solidly as we circled Webster. It was an absolute joy to fly. 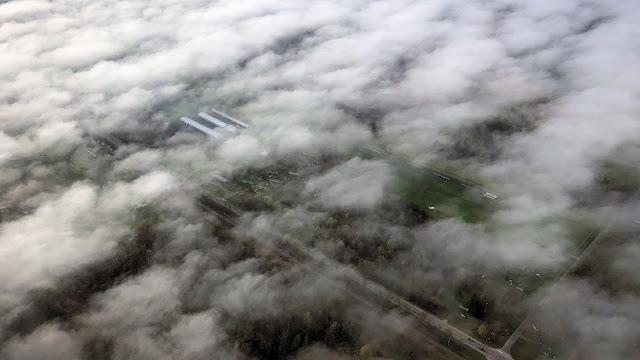 An overflight of the Williamson Sodus Airport confirmed our expectations that the rest of the club was trapped below. 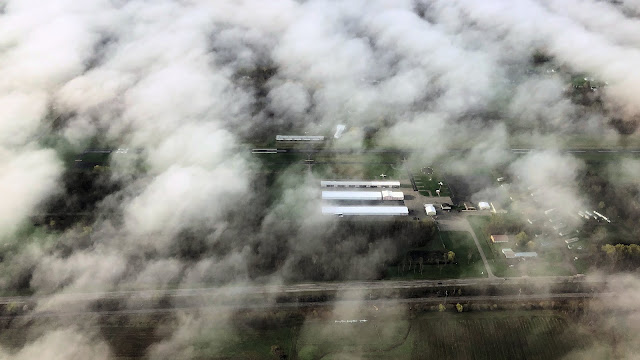 Through holes in the clouds, I could see activity around hangars as the others waited for a break that did not come until late morning. My phone buzzed with a text message from Mike. "Is that you in the Widgeon with Barry?" Those gaps in the clouds obviously worked both ways and, for those on the ground, there was no mistaking the unique silhouette of the Widgeon passing overhead. 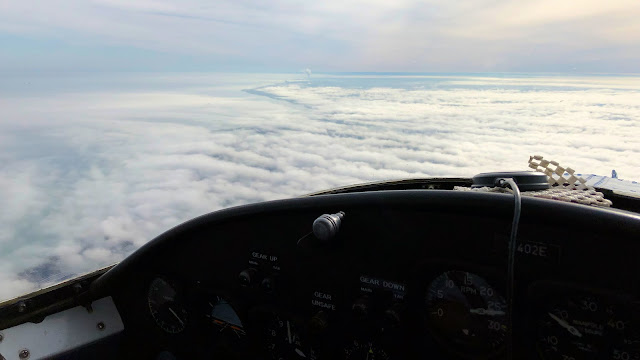 As we neared Fuzzy, conditions were definitely...fuzzy. Barry picked up an IFR clearance with Syracuse. However, field conditions improved steadily and, by the time we arrived, we were able to cancel IFR to fly a normal VFR pattern to land. 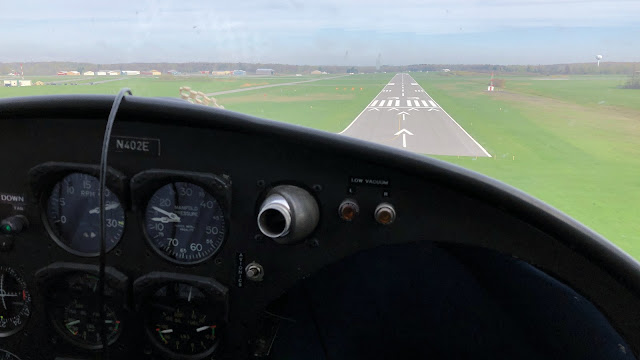 As a machine, the Widgeon is a chimera; it's a boat, it's an airplane, it's a tail dragger. Barry rolled the Widgeon onto runway 33 at Fuzzy, working the rudder bar to keep the ship straight. 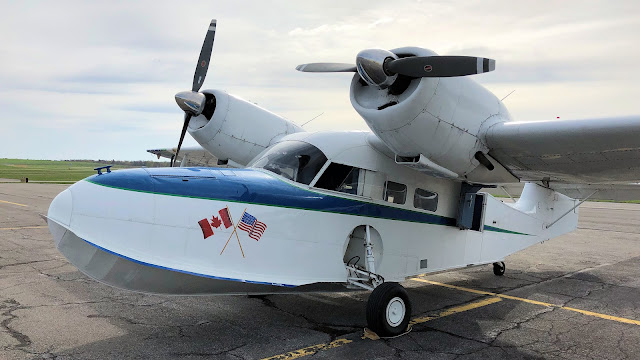 At breakfast, Barry shared his unique aviation origin story, telling us that his wife was the one who wanted to learn to fly in the first place. Because the ground school class was free to spouses, Barry went along for the ride. While he stuck with it, she did not.

Jamie shared his long-held dream of flying seaplanes. Unfortunately, until that morning, he had never flown in a seaplane at all, let alone experienced a water landing. Barry planned to rectify that. 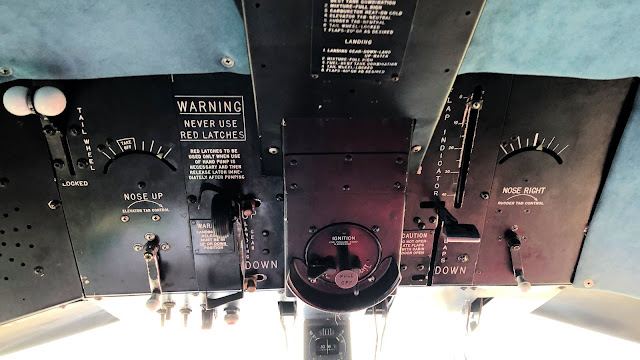 "Welcome to 1946!" Barry said as Jamie maneuvered himself into the right seat. A post-WWII aura permeates the Widgeon in spite of the presence of a modern transponder and a Garmin 530 GPS navcom. 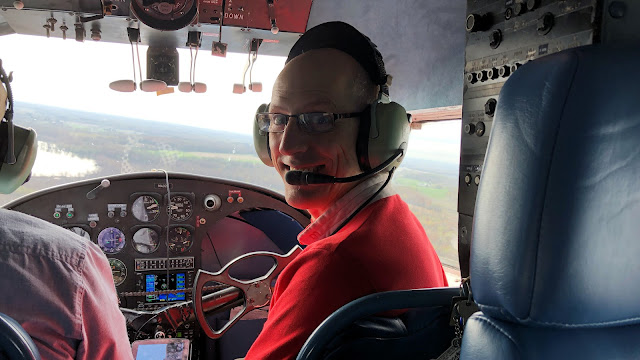 Jamie was clearly excited as Barry set up for final approach to Lake Neatahwanta outside of Fulton, NY. It was the realization of a childhood dream for him. The landing was smooth as Barry settled the Widgeon's hull into the water. 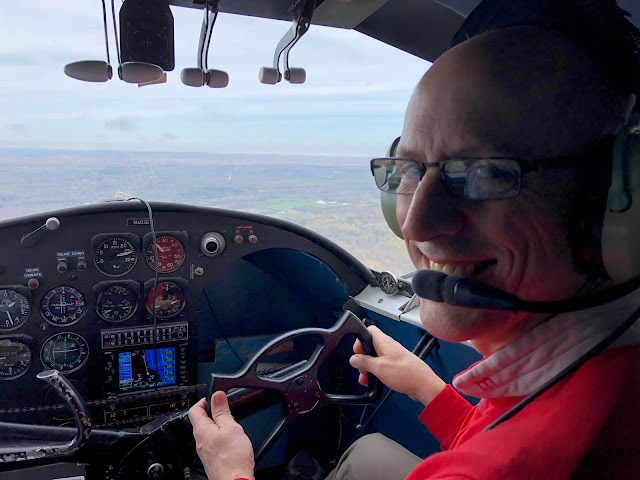 Jamie took the controls on the way home. 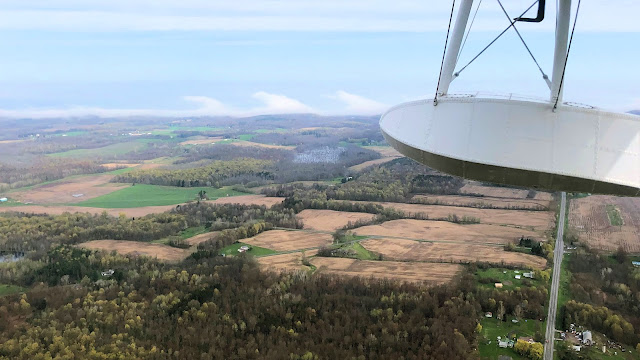 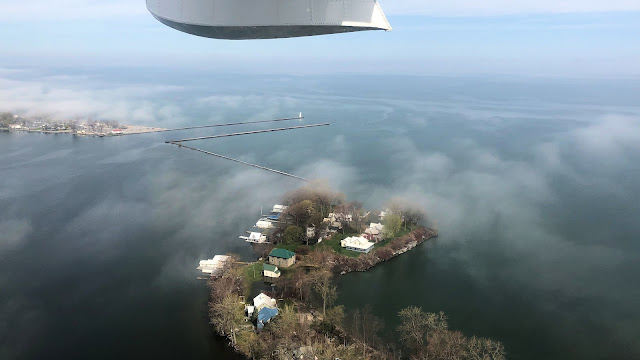 Seeing light boat traffic on Sodus Bay, we made another impromptu landing there before returning to Rochester. As Barry pulled the Widgeon off the water on departure, I saw the driver of a powerboat waving to us in farewell (at least, it appeared to be a wave of farewell - all of his fingers were extended instead of just one). 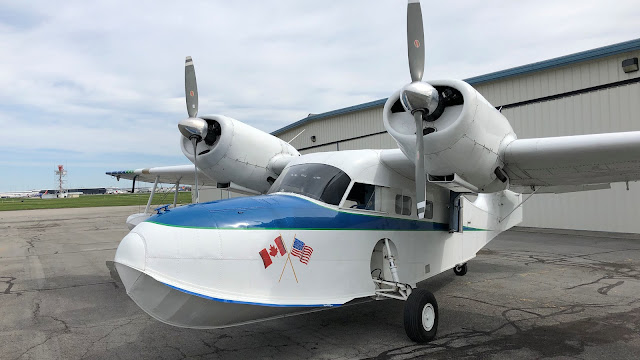 "I think that may have been an expensive ride for Jamie," Barry observed as we disembarked at Rochester. Jamie's drive to pursue a seaplane rating was certainly bolstered that morning. 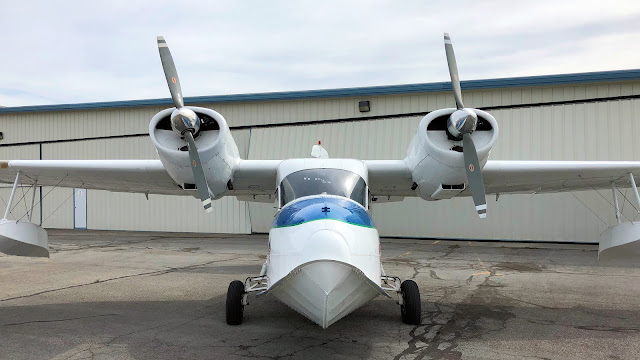 We helped Barry tuck the Widgeon back into a hangar and bid 1946 a fond farewell. Thanks to Barry, we had an amazing experience that morning, especially considering that the circumstances were crafted by a string of bad luck.
Logged by Chris on Sunday, May 05, 2019