"This is my [airplane]. There are many like it, but this one is mine."

Meet N21481, my 1979 PA-28-161 Piper Warrior. No, she doesn't have a name. I've been criticized for failing to name her over the years (he says looking pointedly at his wife), but nothing ever really stuck.
Warrior 481 rolled off of the Piper assembly line in Vero Beach, FL in 1978 and, according to the original invoice, was painted yellow and orange over a white base.  She now looks a little bit less like a child of the seventies thanks to the efforts of her prior owner who repainted her in 2003.


I bought Warrior 481 in Guthrie, OK on March 11, 2004 and flew her home to southwest Michigan as a relatively inexperienced private pilot (total time of ~165 hours) with only an hour in type.


The Warrior's instrument panel, as I purchased it, was pretty basic.  Beyond the obvious six pack in the photo, avionics included a King KT-76A transponder and two ancient King KX-170B nav/com radios. 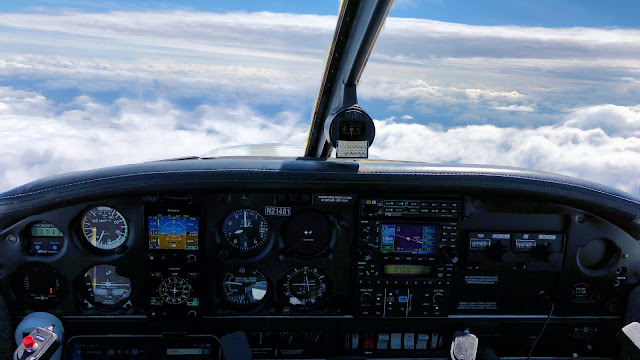 Over the years, I've added or replaced a lot of instrumentation, including:

Warrior 481's four cylinder Lycoming O-320 powerplant propels her about 115 knots (~132 MPH)  true airspeed at 75% power. Sixteen years after buying her with a freshly overhauled engine, the powerplant was overhauled again in 2020 by Penn Yan Aero owing to damage sustained from a defective Slick magneto. Though it retains the same serial number and data plate, the overhauled engine is effectively new given that the oil sump in the the only part of the previous engine that returned.

With a new engine, Warrior 481 was reborn from the unlikely womb of the WWII-era hangar on the field at Dansville Municipal (DSV) in July of 2020. Other features include:


Sure, she's a Spam Can.  But she's my Spam Can.  Together we've been to Oklahoma, Maine, northern Michigan, the Florida Keys, and many cool places in between.