Allure
For many pilots, certain destinations hold an unmistakable attraction. We are drawn to them for reasons that we may not consciously realize, but it usually has something to do with a unique setting. Places like the High Peaks ringed Lake Placid, Cedar Key's short runway terminating at the Gulf of Mexico on both ends, an airport serviced by horse-drawn taxis on Mackinac Island, and Alton Bay's frozen ephemeral landing strip are all examples of places that I have derived great pleasure just from visiting them.
Another example is Basin Harbor, the turf-only airport at the Basin Harbor resort on the Vermont shore of Lake Champlain. There is something about the well-maintained grass runway and the rustic Red Mill restaurant that appeal to me (see these previous trips in 2016 and 2021) and I always enjoy going.
This time around, in addition to several WFC members, I was able to persuade Kristy to join in for the first time.

GASSY or KRAZZ?
A direct route to Basin Harbor from Sodus would mean flying over the Adirondacks and through some active MOAs (Military Operations Areas). Not desiring to do either, I looked for a waypoint near Glens Falls that would allow me to miss the MOAs and minimize flight over the mountains. I waffled between GASSY and KRAZZ, ultimately choosing KRAZZ. Ed had similar ideas, but clearly was feeling more GASSY that day. 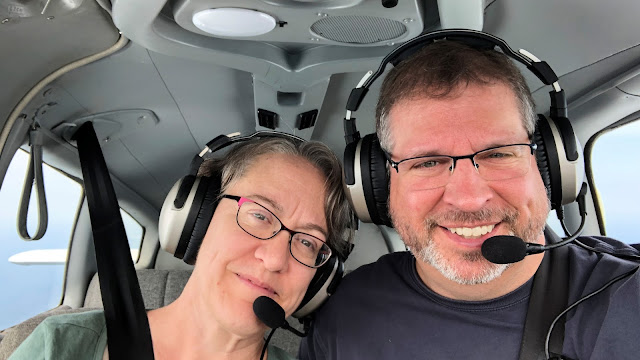 Kristy and I do not fly by ourselves often, so our trip to Basin Harbor was a nice change. 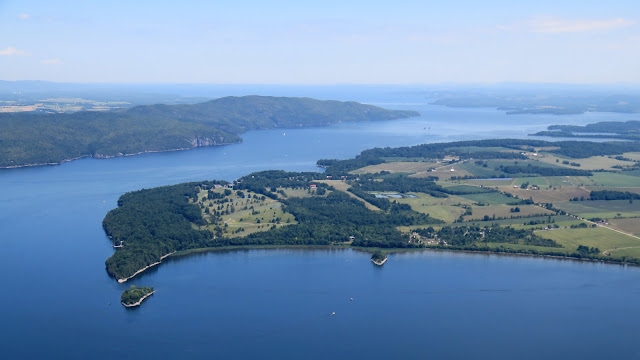 The runway shaped cut through the trees next to a golf course was unmistakably Basin Harbor and we canceled flight following with Burlington Approach. 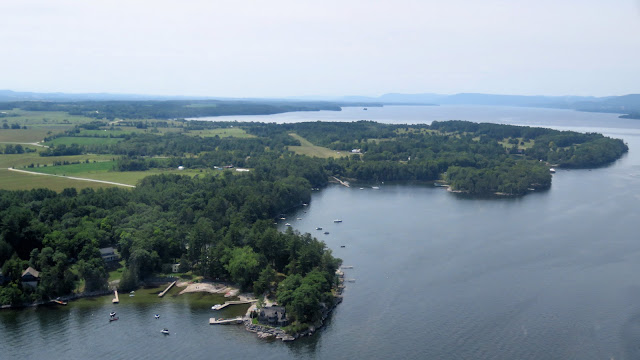 The turn from base to final occurs over Lake Champlain with Basin Harbor's actual harbor on the final approach course.
A Bevy of Turf Landings
I was pleased with our landing on the grass. (See, Ron, neither I nor the airplane have forgotten how!) There were no pictures or witnesses because we were first. However, this set me up to capture everyone else’s arrival. 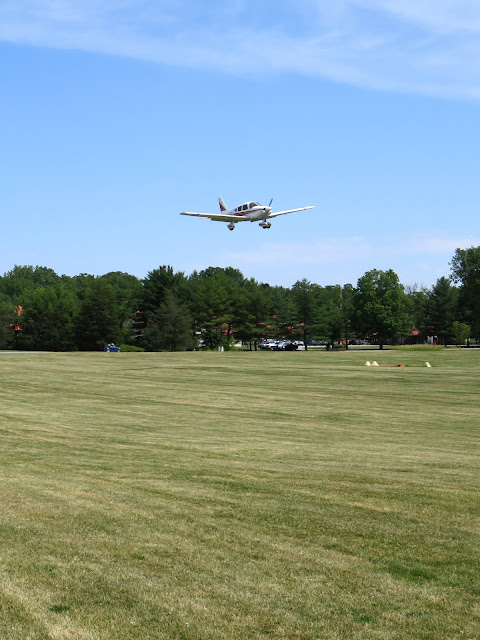 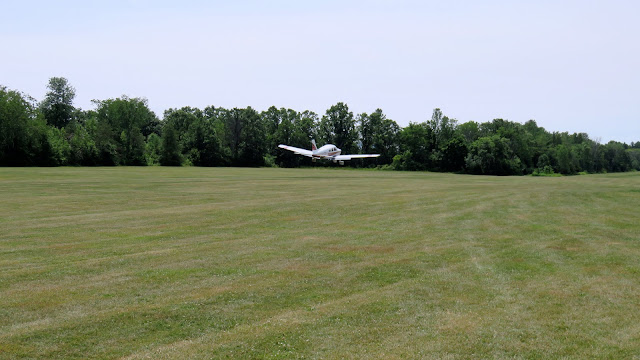 Next to land after us was Ed in Four Four Papa, making his second trip to Basin Harbor. 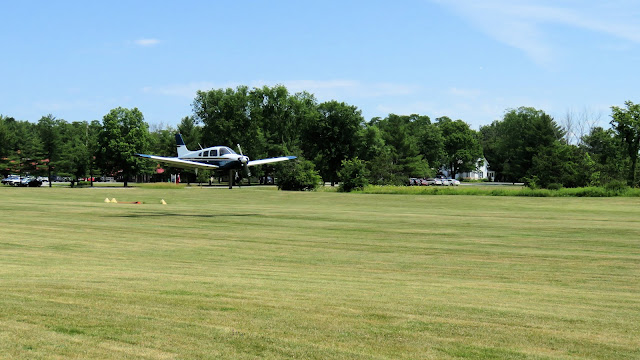 Dan was next in the club's Bold Warrior, Eight One Six. 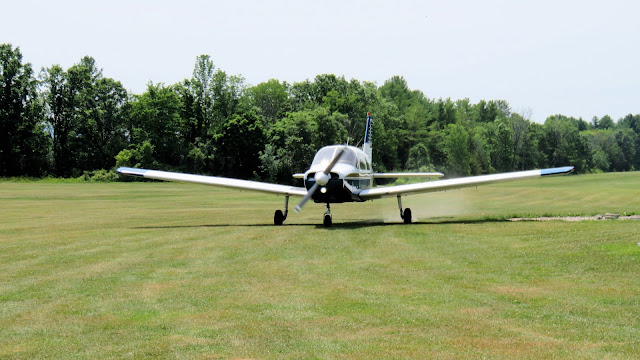 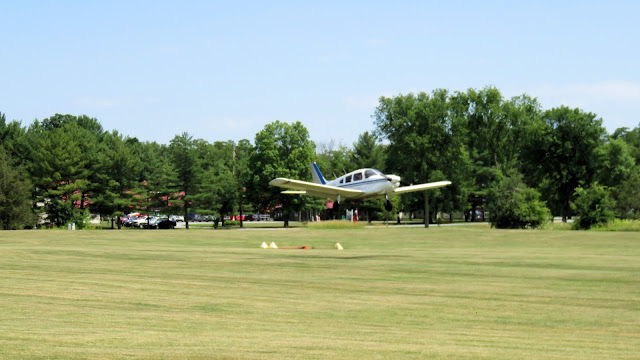 Finally, Gilead arrived with two friends in Eight Five X-Ray. Of the group that participated, Gilead is the only one who has about the same amount of experience on grass that I do and his is also mostly in a Warrior. 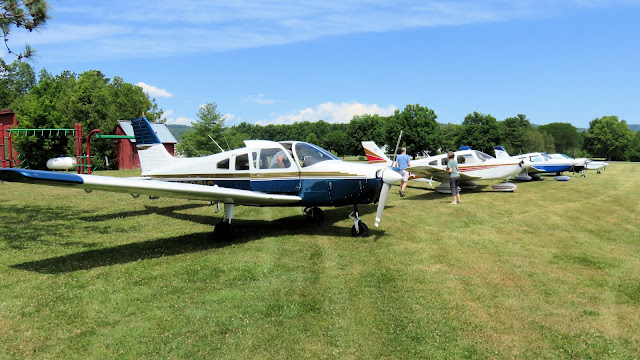 I paused to photograph a portion of the WFC fleet that was parked on the grass that day.

We also paused to take the obligatory group photo. From left to right, Gilead's two friends, Gilead, Ed, me, Kristy, and Dan.
Rustic 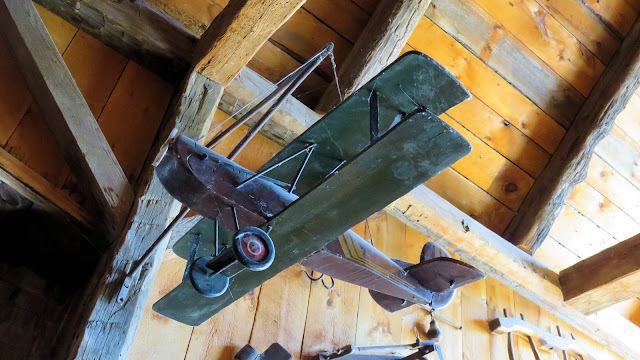 I have posted photos from the interior of the Red Mill Restaurant before and did not collect any new ones, but I liked this toy airplane hanging from the rafters of the restaurant. As on every previous visit, the food was excellent and everyone was very satisfied.
Pitawbagok 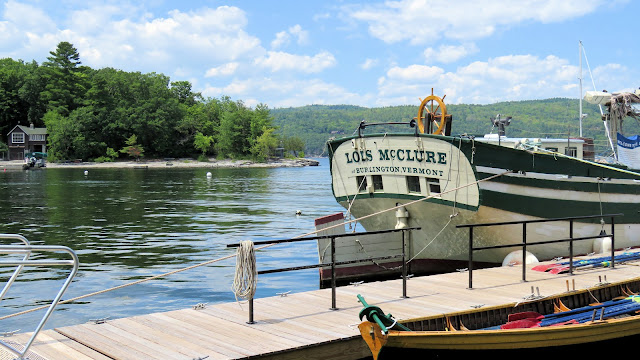 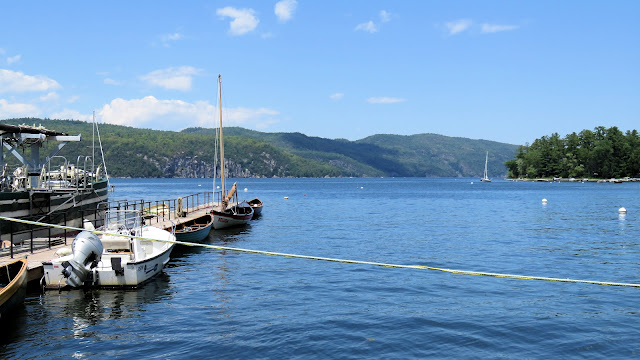 After lunch, the whole group strolled down to the harbor to look out over Lake Champlain. 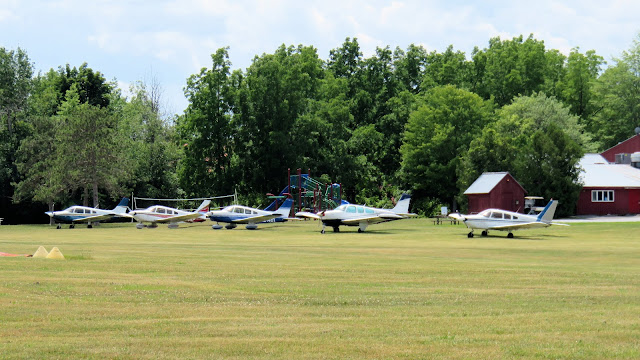 Returning to the airport, we could see four Cherokees and one Bonanza. Duck, duck, duck, goose! 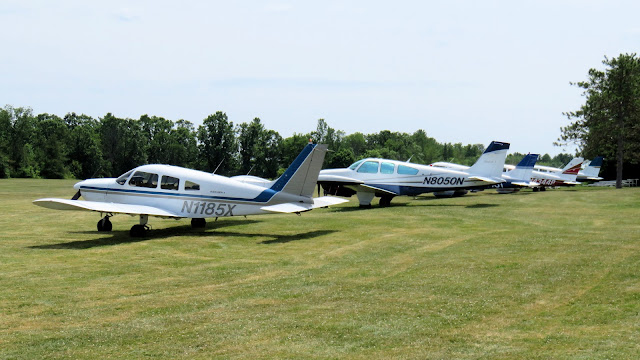 Adirondack Pick-Up
Fellow WFC pilot and professional aerial photographer John needed a ride back to Sodus from Saranac Lake, so I offered to stop on our way home. 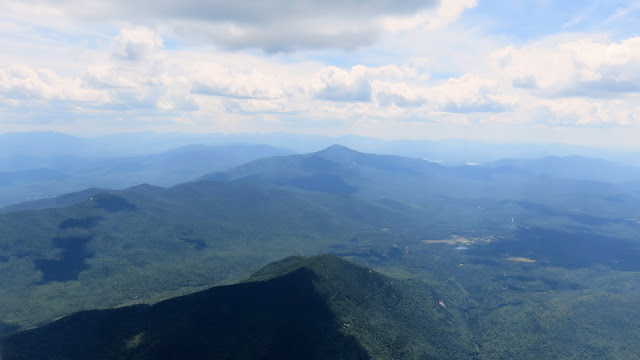 To retrieve John from Adirondack Regional Airport in Saranac Lake, we launched from Basin Harbor and flew an arcing northwest course around the Adirondack High Peaks. Wind at our altitude was over twenty knots and the time we spent downwind of the mountains was every bit as turbulent and unpleasant as one might expect. Rounding the High Peaks the air finally calmed.
It was a quick turn in Saranac Lake. Unfortunately, John did not bring a headset and my extras were back in the hangar. As a result, there was not much conversation on the 1.5 hour ride home except between me and Kristy.

Polite passenger that he is, John complimented my less than perfect landing at Sodus. With the engine stopped in front of our hangar, I removed my headset in time to hear John say, "You know, your airplane is actually pretty quiet."
Without much basis for comparison, I appreciate that perspective.
Logged by Chris on Saturday, July 16, 2022