For Love of Biplanes and Tacos

"Way-co": A city in Texas
"Wah-co": A biplane
"Wacko": Those who fly them
- Paraphrased from t-shirts sold at WACO Kitchen, Battle Creek, MI
Capitalizing on Nostalgia
WACO ("wah-co") originated in 1920 as the Weaver Aircraft Company of Troy, OH and produced a number of highly successful designs ranging from open cockpit biplanes to elegant cabin cruisers. Although the company was defunct by 1947, the designs live on in both surviving vintage aircraft and modern variants. In 1986, WACO Classic Aircraft (now WACO Aircraft) began building handcrafted YMF-5 biplanes based on original WACO type certificates from the 1930s at the Battle Creek Executive Airport (KBTL) in Battle Creek, MI. The open cockpit airplanes are wholly impractical, but they are beautiful works of aeronautical art passionately crafted to evoke aviation’s golden age. In some cases, these elegant anachronisms feature glass instrument panels and amphibious floats.
My first exposure to the modern WACO Aircraft company was in 2004 when Dave purchased his Stearman from them. The Stearman's previous owner had traded the beautifully restored 1941 military trainer in partial compensation for a brand new WACO YMF-5. On our visit to WACO, we received a tour of the relatively small facility where these gorgeous airplanes were produced and it seemed a little cramped. WACO has clearly flourished since and now occupies an entire campus of large hangars at the Battle Creek Executive Airport that includes FBO Centennial Aircraft Services and a self-serve fuel farm that significantly undercuts the full-service fuel price from nearby Duncan Aviation ($4.97/gal versus $5.74/gal).
In 2021, WACO Kitchen opened as an affordable, farm-to-table restaurant in the WACO facility. As profiled by AOPA in January of 2021, the second floor restaurant gives a commanding view of the ramp as well as windows into the hangars where WACO's handcrafted beauties are born.
$100 Tacos
After a busy morning of retracing my aeronautical roots, I needed sustenance for the flight home across Canada. It was no coincidence that I planned my morning activities to culminate in a lunchtime arrival at Battle Creek and the WACO Kitchen.
Climbing away from Dowagiac where I soloed twenty(ish) years earlier, I contacted Great Lakes Approach on the former Kalamazoo Approach frequency and requested flight following through the airspace to Battle Creek.

As I transited the Kalamazoo airport, I had one final look at the Air Zoo buildings that drew me back "home" in the first place.
A swarm of Western Michigan University Cirrus training aircraft created a small cloud of composite, parachute-equipped gnats that buzzed around Battle Creek's 10,000 foot long runway. I fit myself into the traffic flow and landed, requesting a progressive taxi to locate the WACO complex. 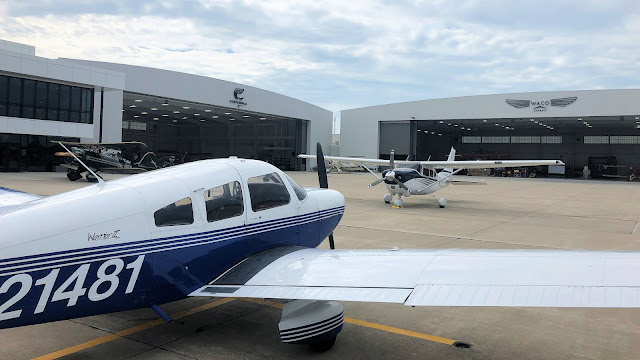 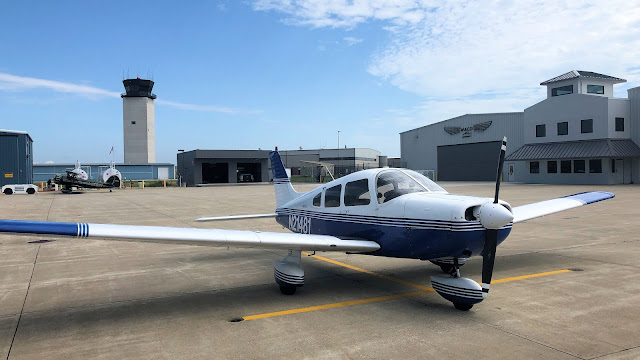 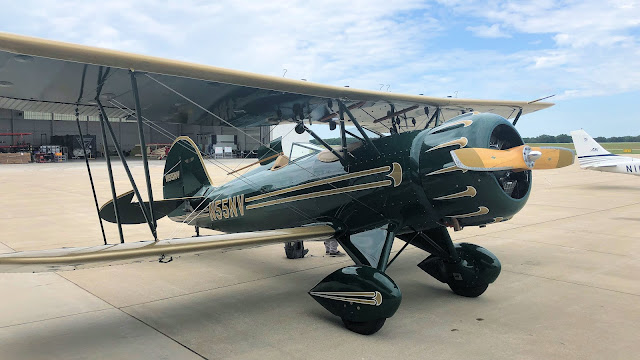 A 2007 WACO was parked on the ramp immediately in front of the restaurant, evidently back in town for some maintenance. 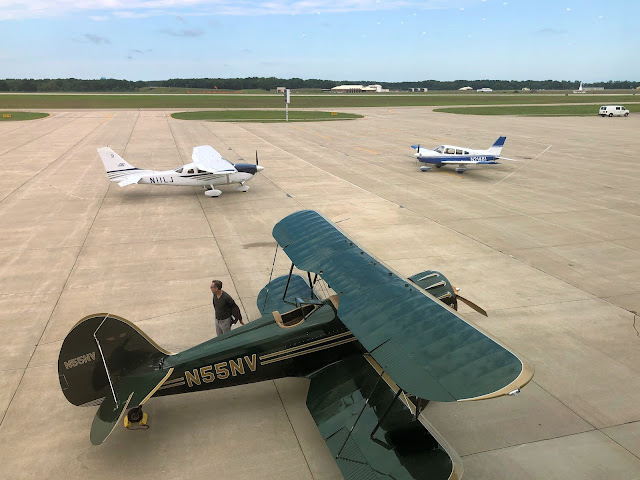 My view of the ramp from the all-season balcony at WACO Kitchen was second to none. My "WACO Tacos" were not only excellent, but reasonably priced. (Thank goodness that WACO rhymes with taco and not, say, tripe.) For a weekday, the restaurant was doing outstanding business. WACO Kitchen just might be my new favorite $100 hamburger destination. It’s a shame that the place did not exist back when I was still flying in Kalamazoo, but perhaps an even greater shame that it’s not closer to my current home. 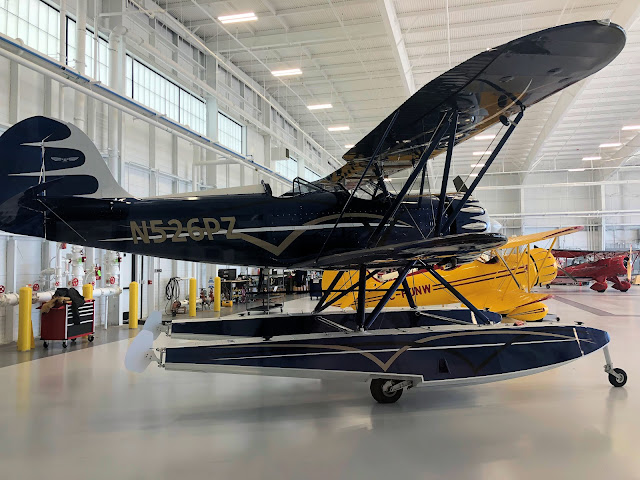 Does putting an impractical aircraft like an open cockpit biplane on amphibious floats make it somehow more practical or even less practical? I pondered this academic question while glued to the window between the restaurant and hangar. Some willpower was necessary to avoid drooling on the glass. 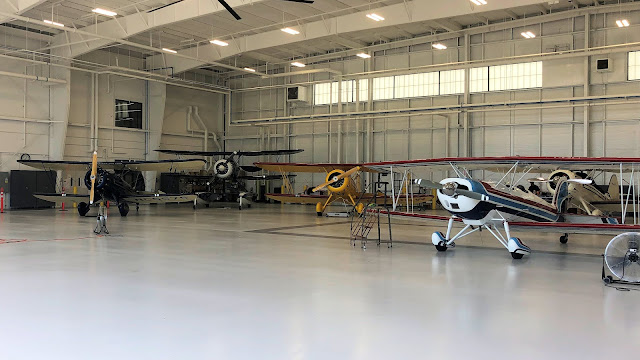 This wonderful collection of flying toys included standard and amphibious WACOs YMF-5s as well as a Great Lakes 2T-1A-2 biplane for which WACO Aircraft also owns the type certificate.
Cloud Surfing
Departures from Battle Creek's absurdly long runway often occur from mid-field intersections. This is presumably done to prevent aircraft from wearing out their tires with a lengthy taxi to the northernmost end of the runway. 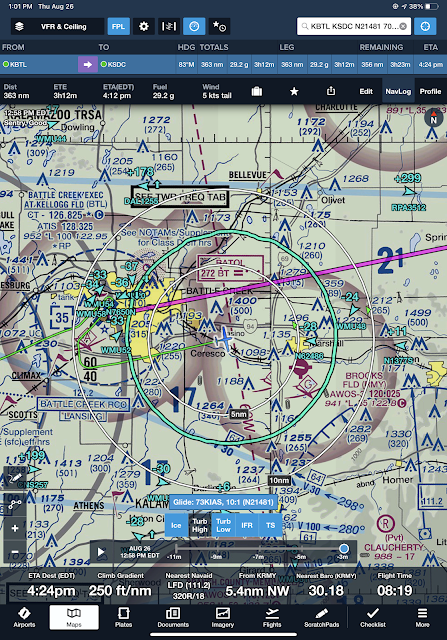 On an instrument clearance, I climbed away from Battle Creek, through the clouds, and away from the gaggle of WMU students orbiting the airport. 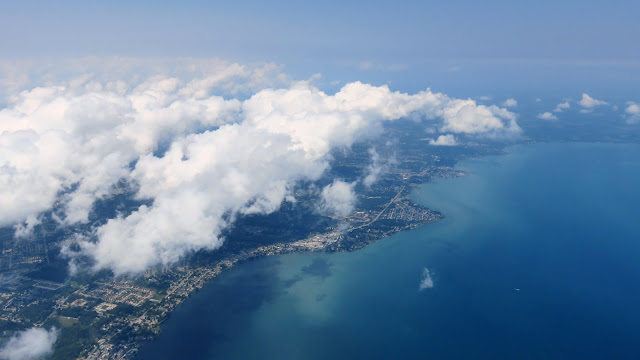 As I crossed Lake St Clair into Canada, it was clear that I had would have some deviations around building cumulus in my immediate future. I requested and was cleared for a new cruise altitude of 9,000 feet and proceeded to get very comfortable asking for deviations from Toronto Center. 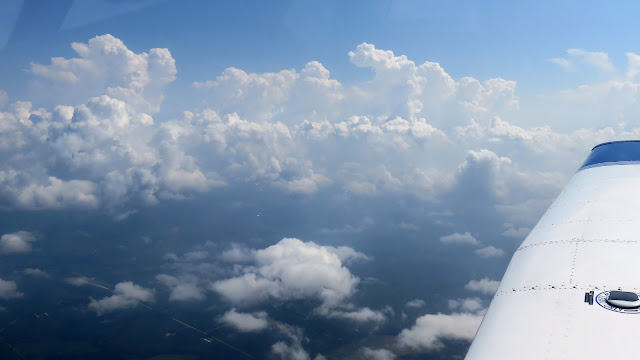 While deviating, I was frequently asked how far I would deviate. This was a challenge because it’s not always obvious what lies behind the next build up. I realized that my weather-determined track was taking me back and forth across the sector boundary between Toronto Center and Cleveland Center and that Toronto was trying to figure out whether to pass me over to Cleveland or not. I stayed with Toronto throughout.
HAL flew the airplane and, from my perch at 9,000 feet, I studied the clouds and made adjustments to my ship's heading by twisting the heading bug to avoid the worst of the build-ups. I experienced updrafts, downdrafts, bouts of turbulence, and occasional pelting by large rain drops that slapped against the windscreen.  Although there was no evidence of thunderstorms along the route, clouds were building vigorously and the route from the Michigan border to Rochester was tiresomely busy.
Welcome Home
Even after 20 years of flying, there are few things more satisfying than the sight of the home airport after a long journey. Whether that airport was Three Rivers after a six hour cross country to bring a new airplane home in 2004, South Haven Regional after a ten hour flight home from Florida in 2005, Le Roy sparkling in the darkness on the return from First Flight Airport after logging my first kilohour, or Williamson-Sodus after a challenging run through weather, the feeling is the same. Sometimes I think that the best part of going away is the deep appreciation for home experienced on the return.
Logged by Chris on Thursday, August 26, 2021