I am not a beach person.

But there we were, landed on that beautiful island off the South Carolina coast, inhabiting a villa mere steps from the Atlantic Ocean. While I am not a beach person, I do love the water. During the day, the sand was literally sole-searing, but I came to enjoy evening strolls along the ragged edge of the mighty ocean's tidal grasp.

While "urban planning" will never qualify as a sexy turn of phrase, that is what came to mind as we explored Hilton Head Island. The whole place is planned. Not in a nefarious sense, but certainly in terms of aesthetic. Structures coexist with the densely wooded landscape, neither garishly appointed nor attempting to outclimb the trees. Roads connect via well-executed roundabouts. It is a tourist destination that intentionally fails to be gaudy.

We spent a week in our rented villa with Mark, Dena, and Izzy. In that time, we played a lot of miniature golf, spoiled ourselves with some wonderful meals from Red Fish, Crazy Crab, The Sea Shack, and the Old Oyster Factory (anyone notice a pattern?); did two fantastic day trips in the Warrior (more on those in later posts); went parasailing for the first time; and -- yes -- even had a couple of beach days. For me, those were largely spent under the merciful shade of an umbrella while re-reading Dune as my feet idly shuffled through the sand. It was a coincidental, but apt setting to read such a novel.

Most importantly, we dodged last year's precedent of another emergency room visit. Sure, there may have been a necessary trip to urgent care, but isn't that more typical of a "normal" vacation anyway? 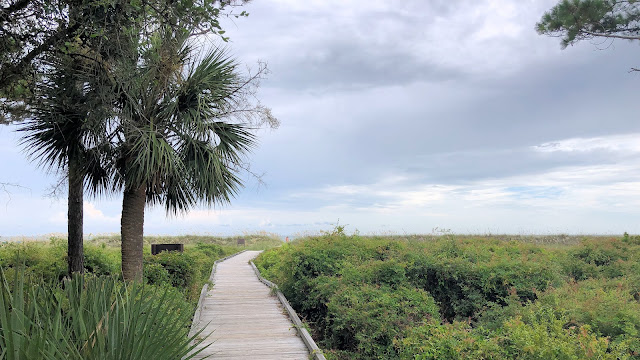 A boardwalk connected our villa to the beach. My first view of it was beneath the gray clouds through which we descended on arrival. With the first day as an exception, we generally enjoyed beautiful weather during our week on Hilton Head. 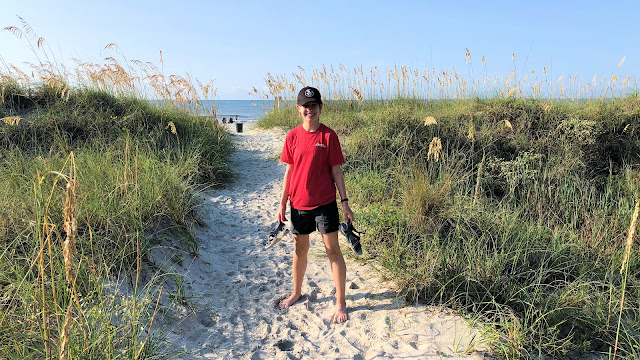 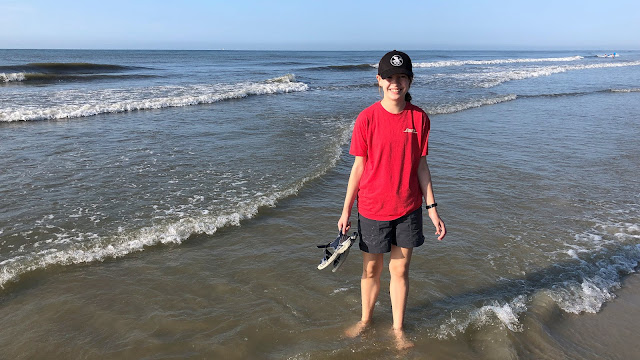 The Bear was very pleased with her beach barefoot experiences. 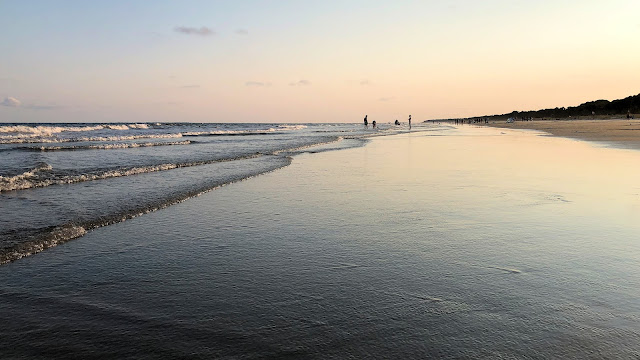 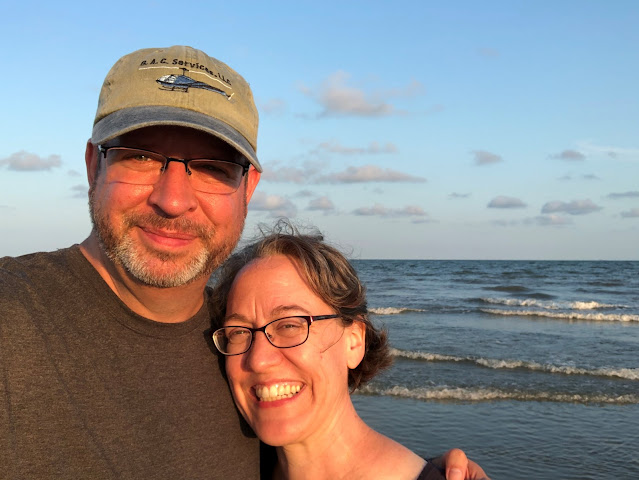 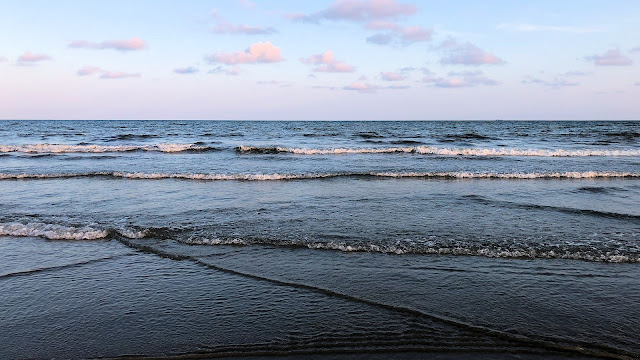 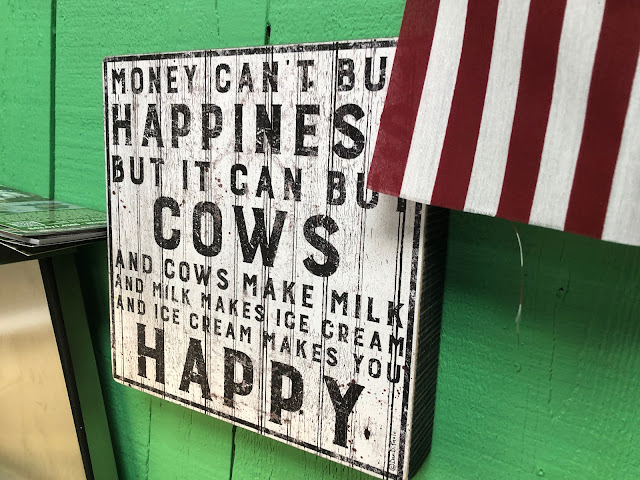 This sign, hung on the wall of The Ice Cream Cone, hewed very closely to the philosophy of both families. Appropriately, multiple visits occurred. The day that the freezers failed was truly a sad one. We lost a lot of flavors that day. 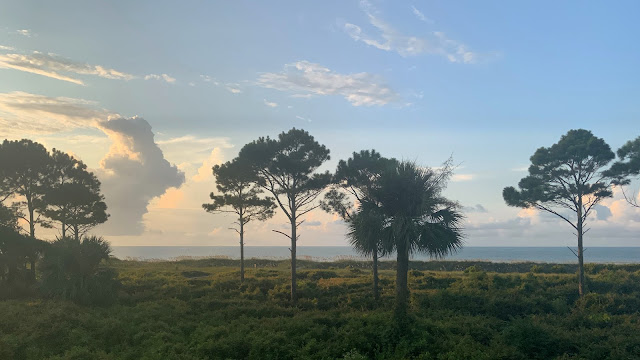 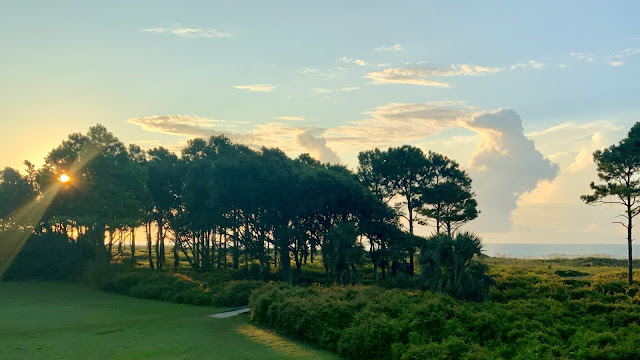 Mornings were hazy affairs, the atmosphere happy to condense instantly on glasses and camera lenses. 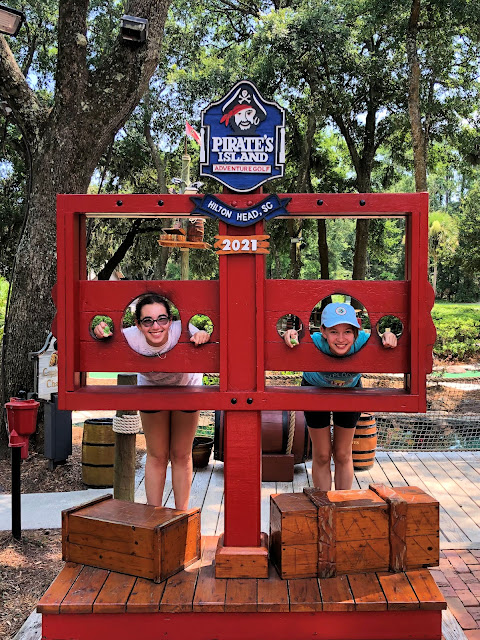 Izzy and The Bear tried out the world's most escapable pillory at Pirate's Island Adventure Golf. 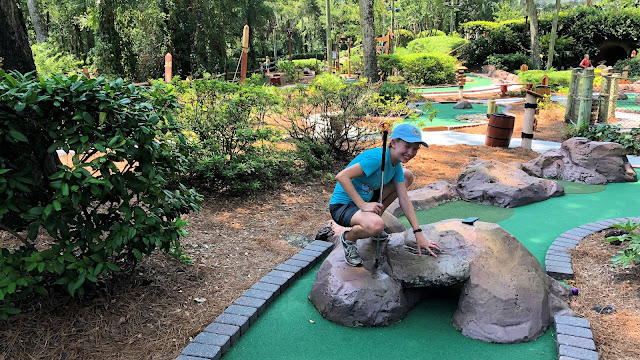 While miniature golf was a popular activity for us, some games had higher stakes than others. 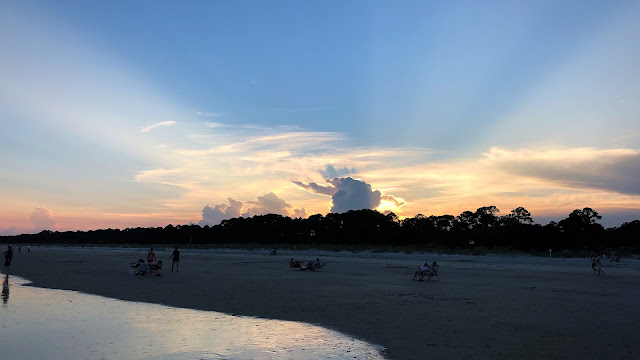 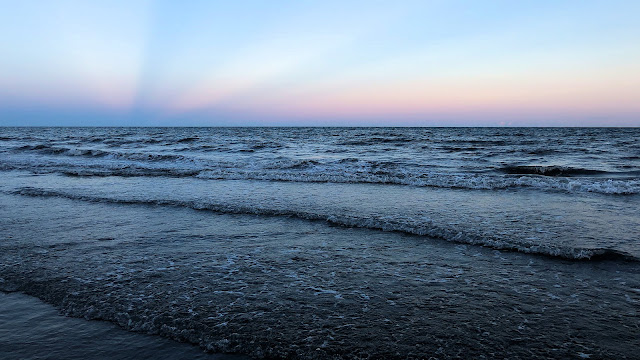 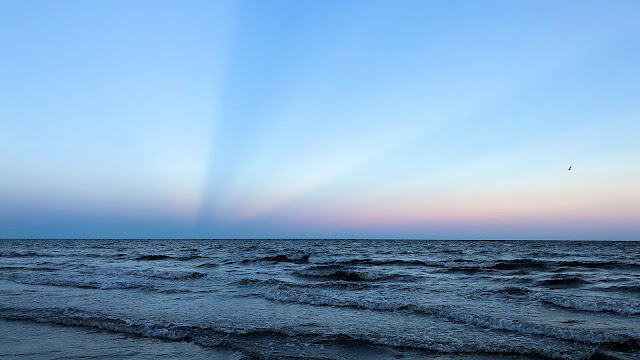 My only regret was failing to capture video of the graceful formation flights of pelicans. Sure, pelicans are not the fastest, but their precise, elegant formation work made them the avian equivalent to the AeroShell Aerobatic Team in their growling World War II T6s. 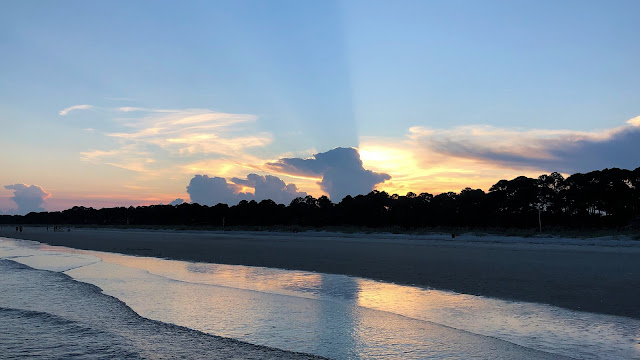 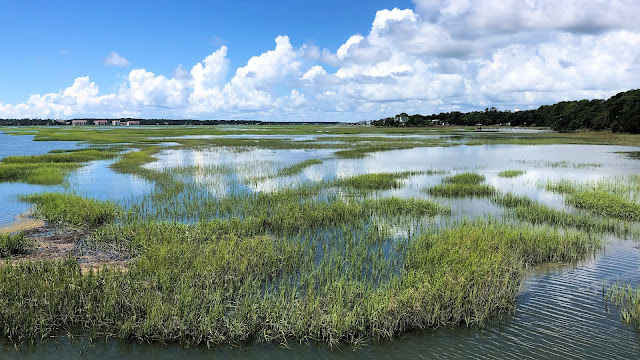 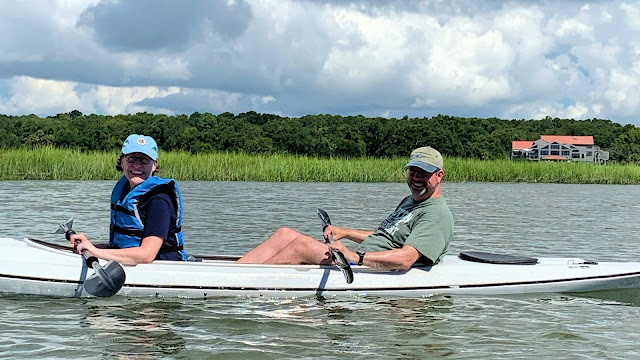 We enjoyed some kayaking on Broad Creek near the Old Oyster Factory, a place that lived up to its name by being established on a "beach" composed entirely of shucked oyster shells. Despite sounding like a place name in a Scooby Doo episode, the Old Oyster Factory serves up some great food.
The Sky Pirates
"Want to go parasailing?"
It was not a difficult question, but it was a little fraught. For me personally, there was an appeal to soaring through the sky unencumbered by an airplane. Unfortunately, that contrasted sharply with my fear of heights.
Aw heck, why not? Dena, Izzy, The Bear, and I all signed up. 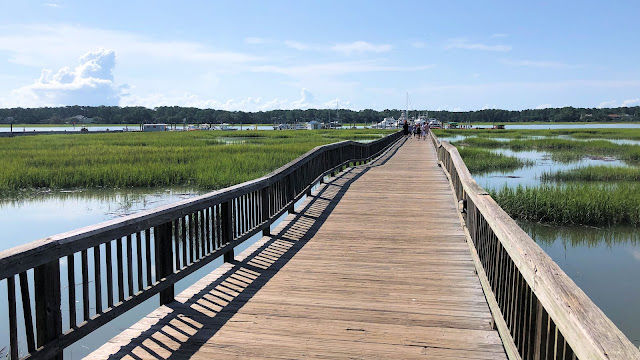 We met up with the Sky Pirates by walking this really extended plank.
Sky Pirate Parasail runs an efficient operation. Passengers go in pairs with each pair readied for flight while the previous pair is airborne. The parachute is inflated the entire time and is sent aloft or retracted by an 800 foot long rope attached to the boat through a motorized winch.

Izzy, the daredevil of our group, went first with Dena.


Riders are launched skyward from a sitting position. Watching those who went before us, it almost appeared as though they were violently yanked off the back of the boat.


Nope, not nervous about this at all.


When it was our turn, the ascent was rapid, but not nearly so violent as it appeared from watching the others. With so little sensation of movement, it seemed that the boat was somehow falling away from us.


Once aloft, the experience was quietly serene. Gone were the sounds of the boat's engine and the XM station playing "classic rock for the cassette generation" (hey, that's me!). The Bear and I enjoyed a quiet conversation, agreeing that we could have floated up there all day.

After several minutes at altitude, we were drawn back toward the boat. It was as though the boat was sky-fishing, caught a pilot and a Flying Bear, and was reeling us in. Before we could alight on the boat, the driver throttled back, killed the lift on the parachute, and dunked me and The Bear into the salt water. The Bear gave an ear-splitting shriek, but no one on the boat could hear her over Def Leppard. Throttling back up, we were plucked out of the water ("The claw is our master!") and gently landed feet first on the aft deck. Overall, it was a great experience. Next time, I'll wear my swim trunks.
Final Night
On our final night, we enjoyed dinner at the Harbour Town Crazy Crab, a delicious close to an eventful week on the island. For most of my life, I never cared for hush puppies. Crazy Crab made me a believer. 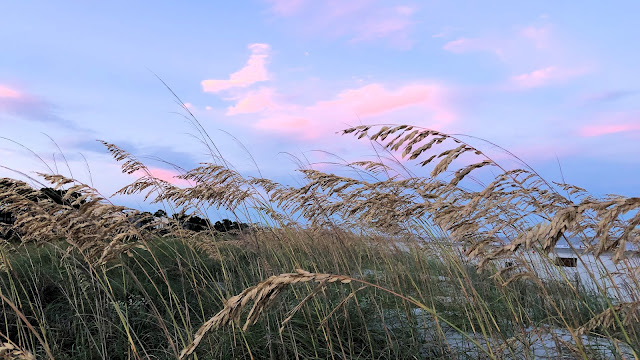 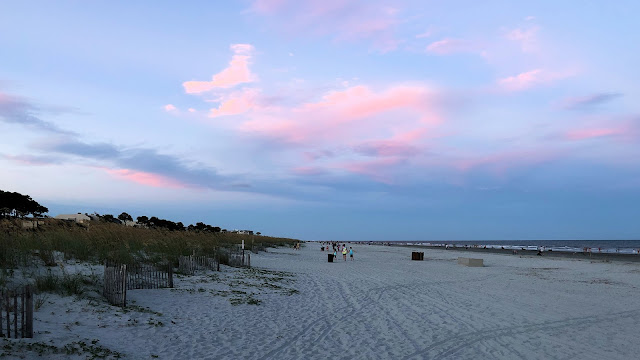 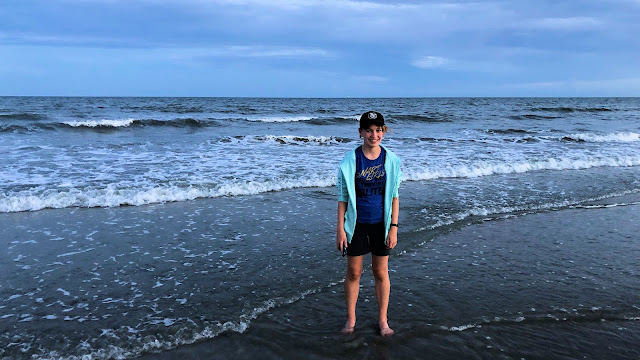 We took a final beach stroll at dusk under pink cotton candy cumulus. 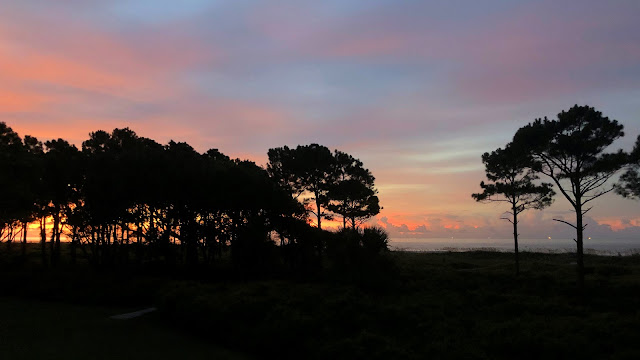 On the morning of Saturday, August 14, I rose at dawn and watched the sun rise from our villa's balcony. In the distance, lights from cargo ships marked their positions in the open ocean. 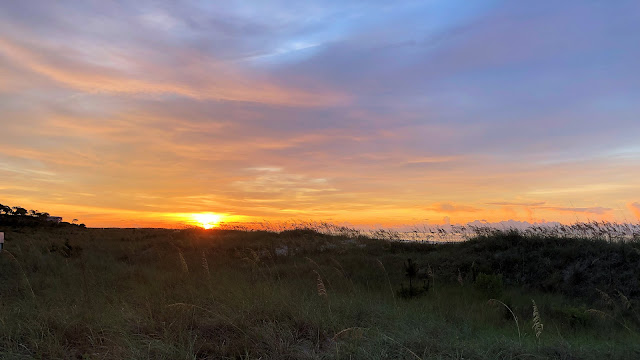 I said my final goodbye to the beach before we parted company with Izzy's family and drove back to Hilton Head Island Airport. I am still not really a beach person, but I may have gained some new appreciation. Our week in Hilton Head was truly excellent.