A vaguely circular yellow smudge in the gray overcast dome of sky marked the position of an elusive New Year's Day sun. Densely packed homes on the outskirts of Buffalo, NY rotated beneath a wingtip as I turned onto downwind for runway 6 at Buffalo Airfield. I was surprised to find the airport completely embedded in a residential area.
I had not visited Buffalo Airfield (9G0) previously because it was clear that there was nothing to do there, but on a day when my sole aim was to aviate and explore, it fit the bill (#215). Although the runway markings were faded, the surfaces were in excellent condition. Except for the runway ends, all taxiway connectors along the 2,666’ runway were blocked by piles of plowed snow, forcing me to roll the full length after touchdown to exit.
I parked, brought the engine to a halt, and disembarked to explore. I found Buffalo Airfield to be a study in contrasts with good paved surfaces and a nice new administration building incongruously paired with some poorly aging structures. At some point, a newer electric bifold door had been slapped across the front of a vintage Quonset hut hangar, a ham-fisted engineering job resulting in partial obscuration of the airport name on the hangar's face. 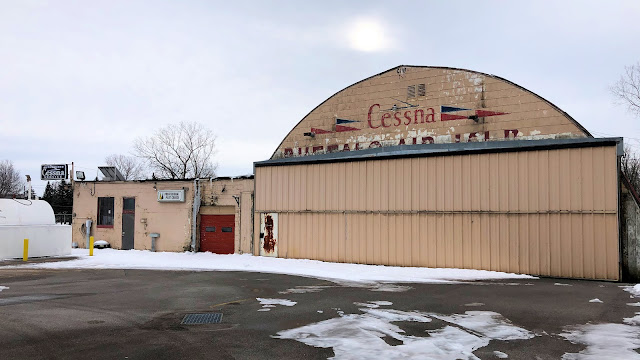 But what truly caused me to pause and ponder my place in the universe was finding a bifold hangar door to nowhere. 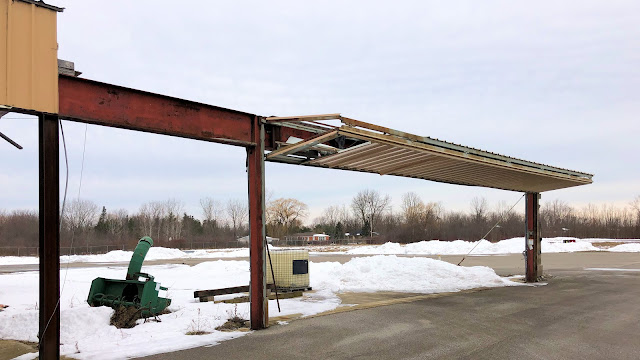 While it was clearly at the edge of a concrete pad marking the outline of a long-gone structure, I could not help but ponder what would happen if I stepped through that door. Would I be invited for tea with Mr. Tumnus? Or would I journey to 1930 New York City on a mission to repair history at the expense of Joan Collins' life? What if I did get through, but lacked the requisite knowledge of ancient languages to program the gate for a return to Earth? There would be no escaping Ra and his creepy glowing eyes in that case.
To play it safe, I chose not to attempt crossing the threshold.
Still, I wondered why the orphaned door remained in place after removal of the rest of the building. The far end of the doorframe is held in place by a chain; someone put in a decisive effort to keep the door to nowhere standing.
A seven minute run through increasingly turbulent air brought me to the 2,465' runway at Hamburg, perched at the edge of a river gorge with a local road passing so close that, on final, I mistook it for a parallel taxiway.
Why did I have such a strong urge to use the German pronunciation of Hamburg in my radio calls? To be sure, it was a day of many mysteries.
Landing was not the main challenge at Hamburg (#216), despite a combination of short runway and long displaced threshold. Although the runway was well-cleared, large chunks of ice frozen to the ramp surfaces created a significant prop strike hazard. After 2020, I can do without any new engine woes. I tried to kick some of the ice loose for the safety of myself and others, but only succeeded in injuring my foot.

I used Hamburg as an excuse to practice a short field departure; the comparatively steep deck angle required to maintain 52 knots with 25° of flap is outside my usual envelope and never feels particularly comfortable, especially in turbulence. That makes it a good thing to practice. After a fuel stop at Genesee County Airport, I returned to the Williamson-Sodus Airport where the winds were lighter and the air both warmer and calmer than around Buffalo.
I completed the morning's exploratory jaunt with 100.7 hours on the new engine since install. It is generally recognized that a new engine is statistically most prone to failure in the first 100 hours of operation than at any other point of its operational lifetime, making this an important milestone for any new or rebuilt powerplant. While not a guarantee that all will be well from that moment on, we are at least well-poised for success.
On this New Year's Day following the reviled year of 2020, perhaps that is also a good analogy to apply to setting expectations for 2021.
Logged by Chris on Friday, January 01, 2021