Confession
For me, the name "Cessna" conjures images of the ubiquitous 172 and the phrase "Spam can". To my friends who own and fly Skyhawks, I am not trying to throw stones. I fly a Cherokee derivative; it's a Spam can, too. There is absolutely nothing wrong with Spam cans. Many are wonderful flying machines and my personal Spam can has brought me many years of adventure and wonderment. But they are commonplace and not exactly museum pieces. (Yet.)
Of course, there is more to Cessna than the mass-produced Skyhawk. There are capable twins like the 310, a successful line of business jets (the Cessna Citation X is currently regarded as the fastest in the world), and a handful of well-loved legacy taildraggers like the 120, 140, 170, and 180.
To my mind, one of Cessna's most beautiful designs is the 195, a burly, radial-engined, conventional geared work of flying art deco elegance produced between 1947 and 1954. While the Beech Staggerwing has always been my favorite executive class personal aircraft from that bygone era, the 195 rates a close second (tied with the Stinson Reliant). So tightly cowled that bump-outs were required to accommodate the radial engine's valve covers, the 195 epitomizes a 1947 vision of what a rocket ship should look like.
It is definitely no Spam can.
Cold
Dense 20°F air had settled thickly over the Williamson Sodus Airport. I found snow packed against the hangar door and the adjacent apron glazed with black ice. Though her engine was warm beneath an old sleeping bag, the Warrior's tires were low and the cold robbed my fingers of dexterity while I tried to add air. I cleared the breadth of the hangar door with a shovel and discovered that snow-packed shoe soles were tantamount to slathering my concrete hangar floor with grease when it came to traction.
This was all Matt's fault, of course. Matt suggested an outing to the Fulton County Airport (NY0) between Rome and Albany. This filled my needs for the day because Fulton County was on my list to visit someday and I wanted to circulate some oil in the Warrior's new engine.
But I had no expectations for the jaunt to be particularly interesting. By all reports, the restaurant on the field closed many years ago (and who wants to sit inside a restaurant these days anyway?) and, being a Sunday, the shop on the field specializing in Cessna 195s was likely to be closed. In fact, given a comment in ForeFlight about the lack of NOTAMS for the unplowed runway, landing there might not even be an option.
We were to be pleasantly surprised.
Transformation 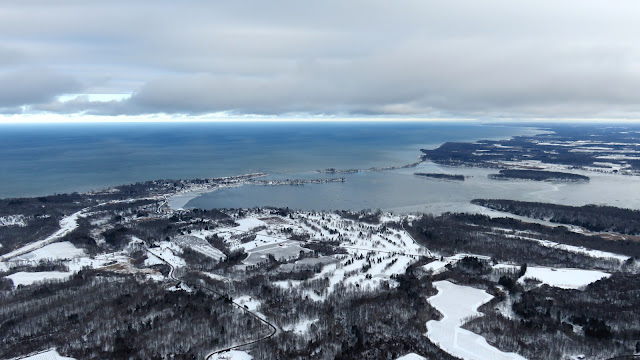 Sodus lay under a low overcast as Matt in Six Echo Sierra and I in Warrior 481 leveled at 2,500. A newsprint landscape surrounded the frozen gunmetal water of Sodus Bay. 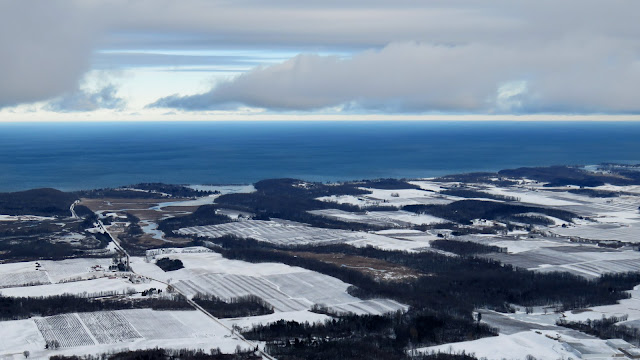 Breaks in the ceiling offered hints of a world unshrouded by ice-laden clouds. 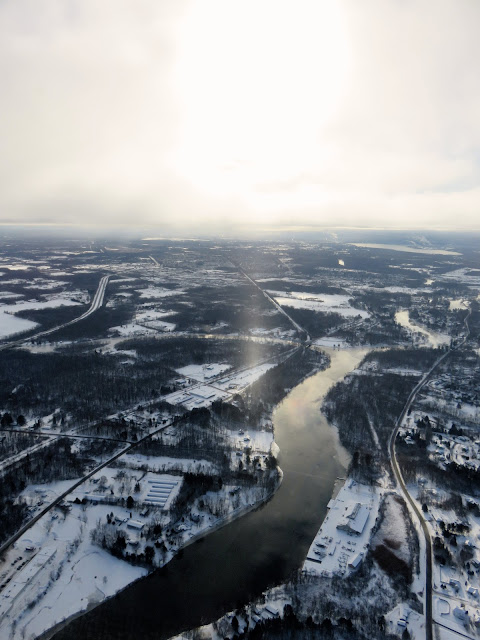 As we skimmed beneath the ceiling while crossing the Oswego River, the air below scintillated in the sun as a multitude of ice motes streamed past in the frigid air. Prior to reaching Syracuse, we emerged from the overcast into a colorized version of the world. There is something magical about flying an airplane from the gloom to the light. It may not be magic in the supernatural sense, but I feel it deeply in my heart.
Perfect Timing
Our trek led into the heart of advisories for turbulence and low level wind shear. Happily, the ride remained mostly smooth. From ten miles out, I spied the black stripe of a well-plowed runway at our destination. Automated weather at Fulton County reported wind out of the southwest at 8-10 knots gusting to 15. Inbound roughly 2500 feet above field elevation, I noticed that an increasing tailwind had inflated my ground speed to 149 knots, suggesting a steep wind velocity gradient. Low level wind shear, indeed. 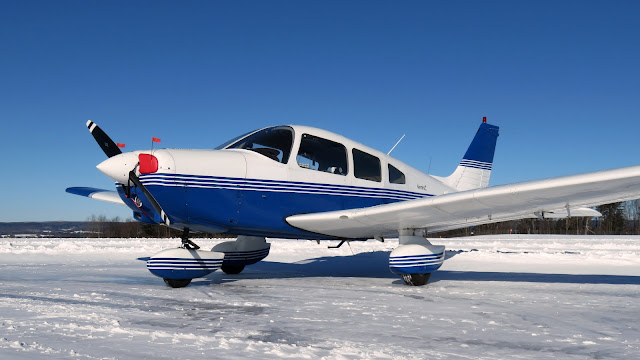 On short final, Warrior 481 levitated downward to the runway numbers (airport #217). Fulton County sits on a plateau and a savage wind tore across the open spaces of the airport, making the air seem much more inhospitable than Sodus. I explored the grounds while waiting for Matt to land and confirmed my original suspicion. The place was locked up tight and the keypad on the door did not seem to have an associated aeronautical riddle to facilitate pilot access.
And then, in continuing a fine tradition of dumb luck, Sam drove through an airport gate and parked in front of the FBO.  "Hey, how are you doing?" we said to each other simultaneously. Sam explained that the door code was the UNICOM frequency. I entered it and held the door for him. 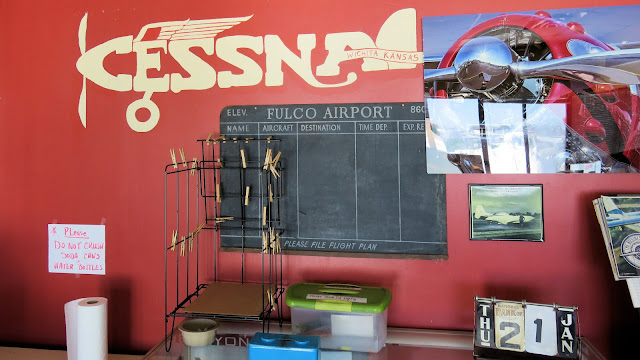 He was carrying a box of parts into the adjoining hangar. "I heard that you have some neat toys in there. Would I be able to look around?” I asked. Sam was amenable.
I returned to the ramp to wait for Matt and his three year old daughter. As I watched the small person walking in trail behind Matt, I found it hard to remember The Bear ever being that small.
When we opened the door to the hangar, I gasped.
The Doctor Is In 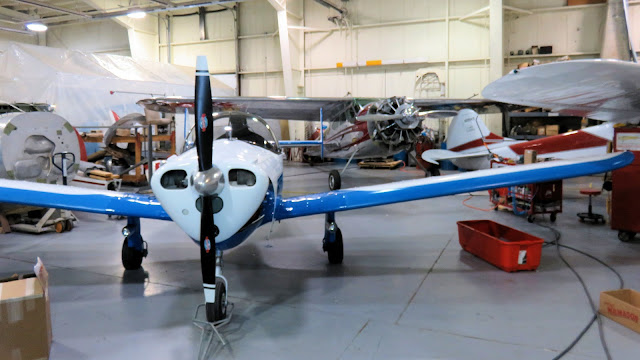 I don’t know what I was expecting. Maybe an airplane or two. Instead, the space was filled with at least eight Cessna 195s, more than I had ever seen gathered in one place. They were in various stages of work, from the immaculate aircraft merely waiting for a new cylinder to a stripped-down fuselage cradled in an original Cessna jig being rebuilt piece by piece. Sam was understandably proud of the original Cessna jig. At seventy years old, it was a working artifact, a tangible link to the past, and a guarantee that new restorations would conform to the original mid-twentieth century design. Incongruously, at the center of it all, sat a beautiful Ercoupe, the only non-195 in the entire hangar. 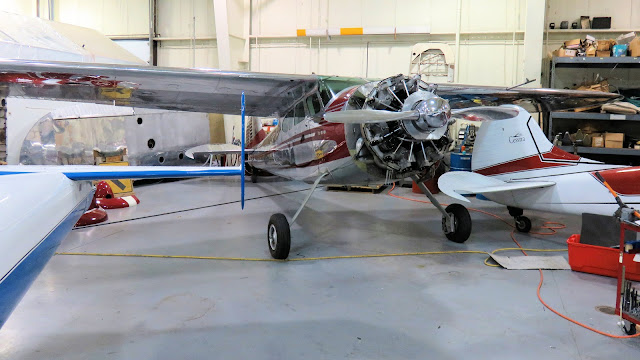 Sam was kind enough to give us a tour, explaining many of the ongoing projects. 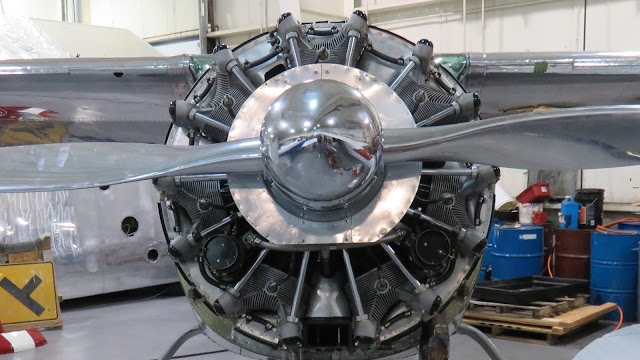 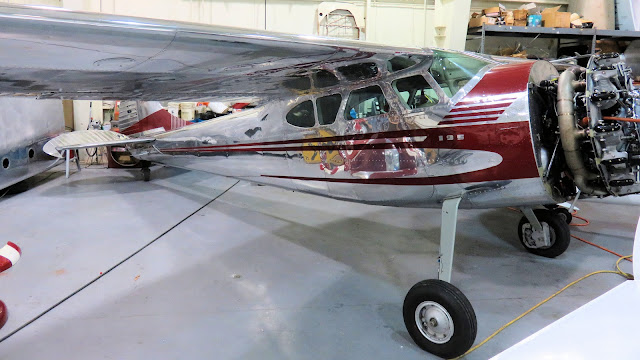 I have always thought that 195s dressed in unpainted, polished metal were the most eye catching. I cannot imagine the amount of work required to keep a seventy year old airplane in this kind of condition, but it must take gallons of elbow grease. 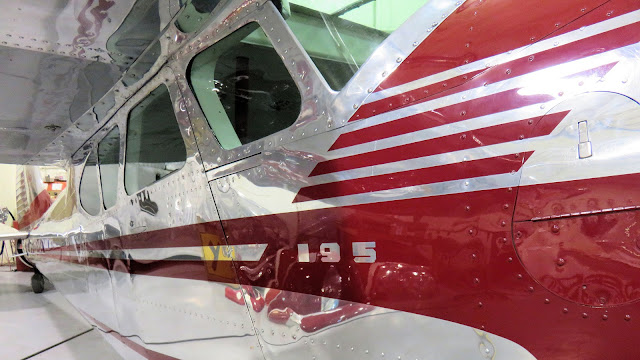 This 195 was awaiting a new cylinder. Sam explained that the 195 Factory does some engine work, though they send complete overhauls out.
"Those aren't going to Penn Yan. Where do you send them?" I asked. Sam explained that overhauls went to Radial Engines Limited.
"They're in Guthrie, Oklahoma," Sam added. I snorted and explained that I bought my airplane in Guthrie. Radial Engines Limited sits on its own private airport on the outskirts of Guthrie, rather than the large municipal airport where I first laid eyes on Warrior 481. 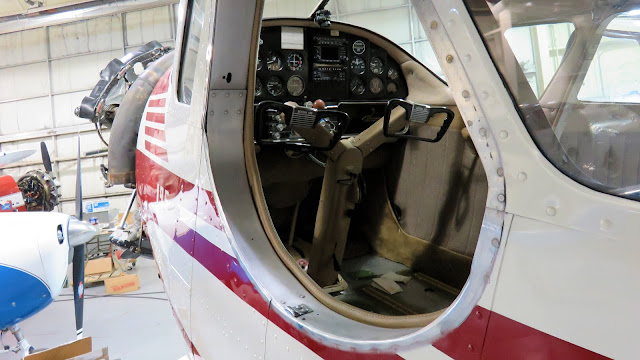 This 195 was equipped with the optional emergency exit, an unusual rounded portal fashioned with a level of craftsmanship that would probably be considered impractical by 21st century aircraft designers. 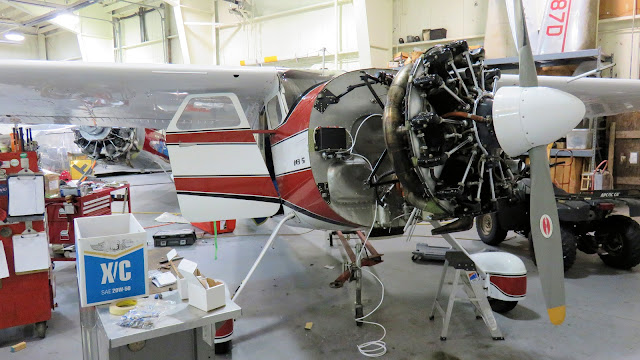 I was impressed by the Cessna 195 engine mount. It is hinged to allow the radial to be swung away for easy access to accessories on the back. In this case, the 195 Factory was installing a small, high amperage battery on the firewall, relocating it from the tail section to eliminate losses in amperage to long battery cables. 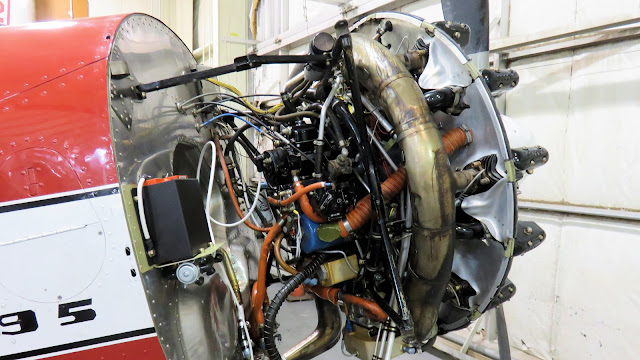 Sam explained that the space under the cowling is tight, pointing to bump-outs in the firewall for the pilot's and copilot's toes plus a cavity to accommodate the engine accessories. He also pointed to an STCed system that scavenged oil accumulated in the bottom cylinders of the radial Jacobs engine. 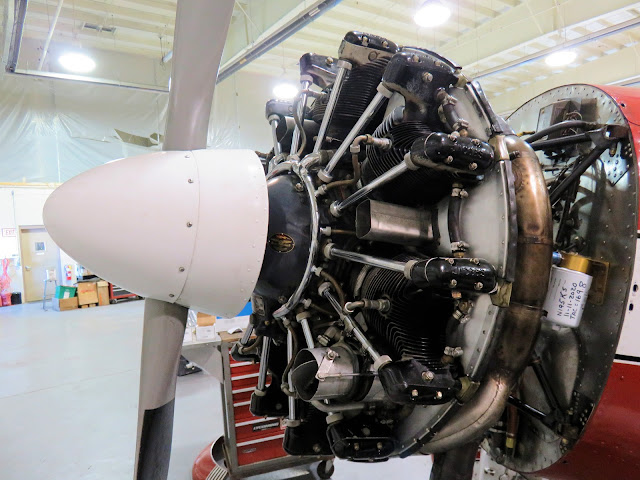 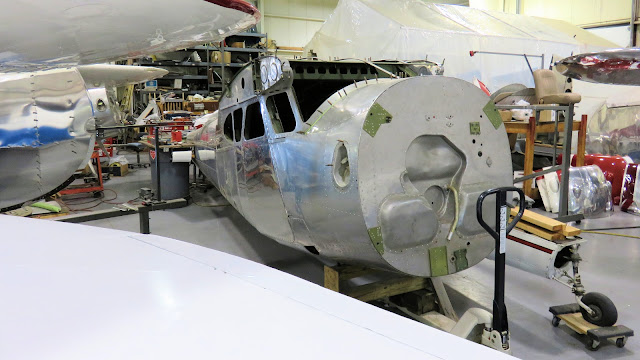 This clean fuselage is a work in progress. Note the bump-outs and cavities in the firewall described previously. 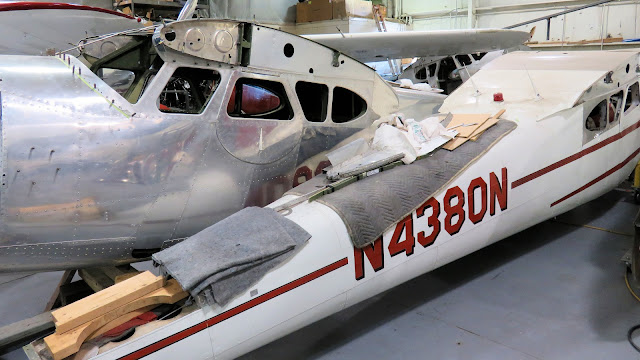 Toward the rear of the shop was a tent for paint stripping. One of Sam's colleagues was busily working on a set of wings from a 195 that had been ground-looped. The back of the shop also contained equipment for working sheet metal and a large lathe among other tools. 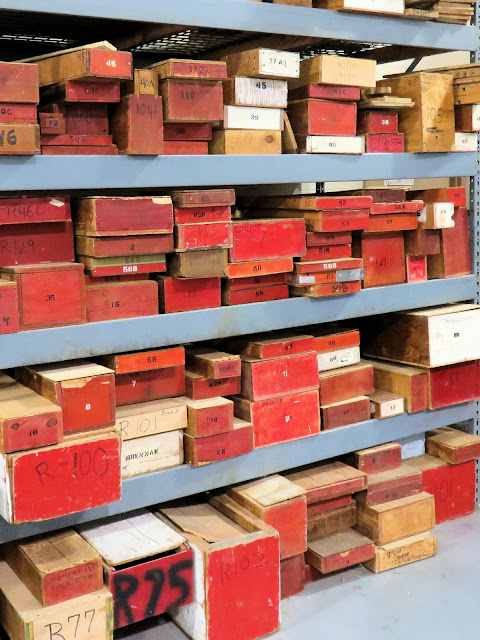 A large shelf near the back of the hangar contained original, “new” Cessna 195 parts in a plethora of wooden crates, a treasure trove of components for an airplane long out of production.
Overall, I was genuinely impressed by the operation and thanked Sam for his time. He seemed to enjoy chatting with enthusiastic visitors.
Waiting Room 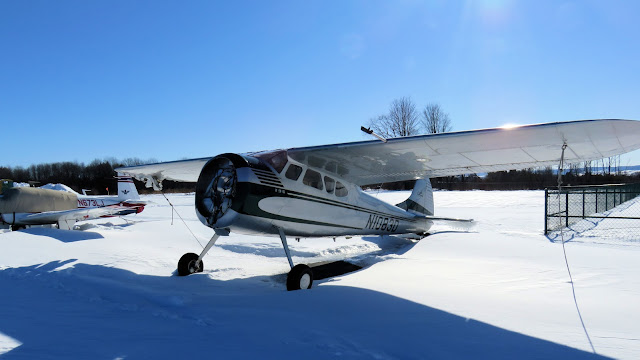 Back outside, I pitied this Cessna 195. The Cessna Doctor's waiting room was a bit chilly. 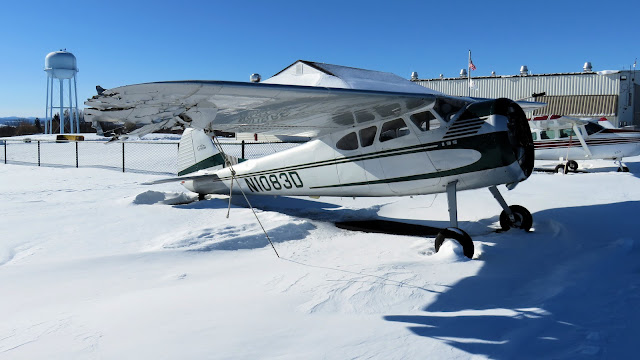 A look at the right wing suggested a ground loop incident in the recent past. 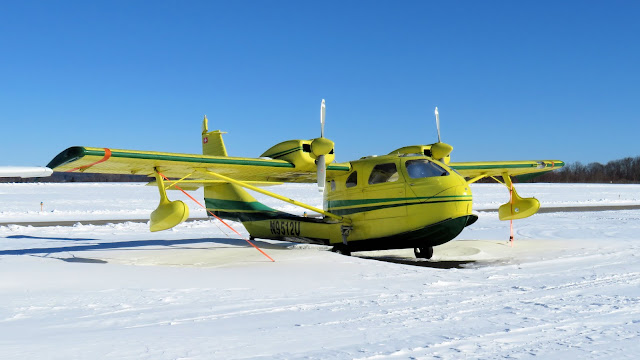 I wandered over to look at the SeaBee I noticed while landing only to realize that SeaBees were single engine pusher aircraft. This was a rare UC-1 TwinBee conversion. Powered by two 180 hp Lycomings, the TwinBee was an excellent short take-off and landing (STOL) aircraft compared to the original underpowered Republic amphibian. According to some sources, only 23 conversions were made and, of those, only 15 are registered in the United States. This is a rare airplane.
Flying like Bob Seger (Against the Wind)
We slogged home against a stiff headwind at 3,500 feet, initially averaging about 85 knots over the ground and gradually making better progress closer to home. This time, conditions aligned with the turbulence warnings and we experienced periodic moderate chop all the way home.

Although it was brighter in Sodus than it had been that morning, a general overcast prevailed. Matt landed in Six Echo Sierra a few moments behind me. 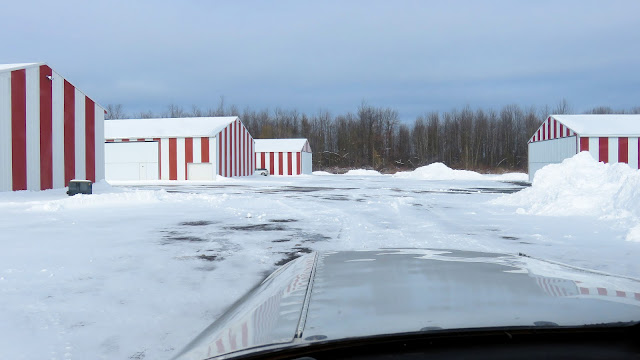 As I surveyed the piles of snow along my taxi route, I realized that the last couple of winters have been mild enough that I have not had to manage snow as a part of my preflight in a long time. The keenly felt chill of the air that morning probably reflected a lack of acclimation on my part. 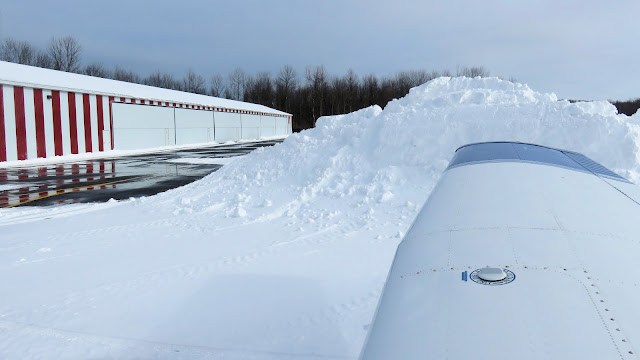 Despite the overcast and 22°F air temperature, enough sun broke through to completely melt all ice on the ramp in front of my hangar. It is the very phenomenon that makes paying a premium for a south facing hangar worthwhile in the north.
Even though I set out that morning merely planning to exercise the airplane, I had a much more interesting adventure than anticipated. Thanks to Sam from the 195 Factory for his hospitality and Matt for suggesting the trip in the first place. It was a pleasure to not only see these vintage works of art, but to visit a place that positively exuded pride in workmanship.
Logged by Chris on Sunday, January 24, 2021