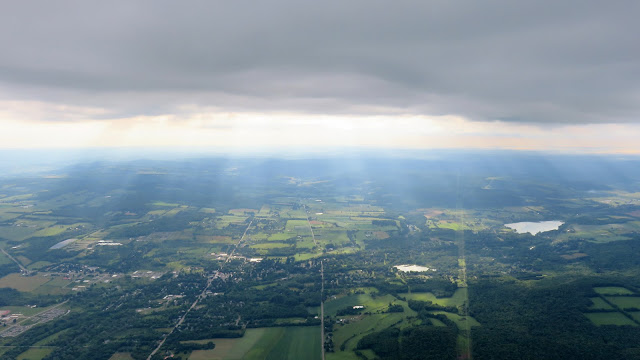 The broadcast came from a tiny dot off my left wingtip in Tom's voice. I was already mulling over my reaction to the lowering ceiling ahead and came to the same conclusion. I keyed the mic and added my request to his. It seemed odd to descend to a westbound IFR altitude while flying southeast under VFR, but the Hemispheric Rule does not go into effect until 3,000 feet above the ground and terrain passing beneath our wings was at least 2,000 feet above sea level. 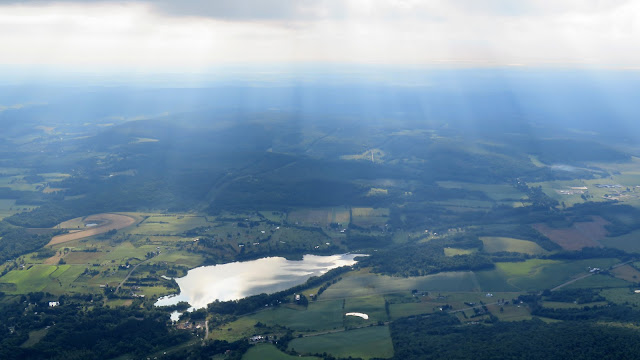 The answer to both of us was a neutral, "VFR altitude your discretion." How many times in a day does a busy Center controller utter that phrase? It can be dicey to find oneself in a situation with rising terrain and lowering ceiling, but the mountains of northeast Pennsylvania are less lofty than others and there was plenty of vertical space to avoid being pinched. 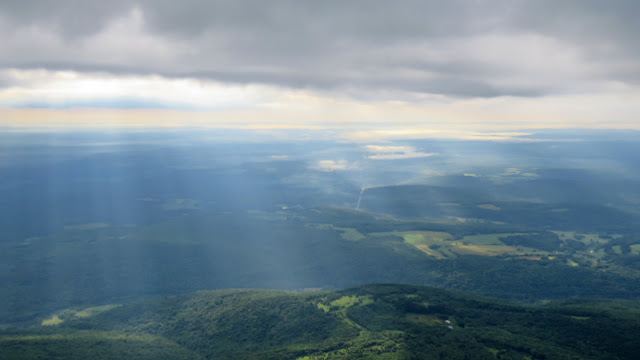 The idea for a breakfast run to Cherry Ridge, one of the only "nearby" airport diners actively managing through the ongoing COVID-19 pandemic, was Tom's. Our two aircraft departed from the Williamson-Sodus Airport at 7:30 that morning. At the time, we were among the few stirring at the airport. When Lee arrived, we debated inviting him along, but our favorite Colt pilot rarely strayed so far away from home as Cherry Ridge. 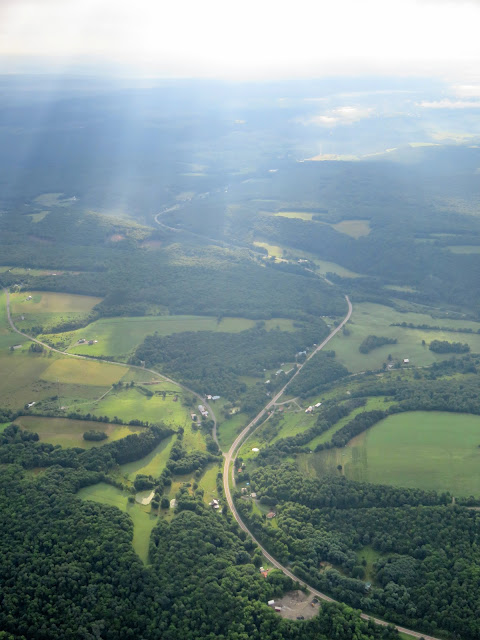 Periodically, I checked for Tom and Alicia off my port wing, reassured whenever I saw the small airplane two miles away. 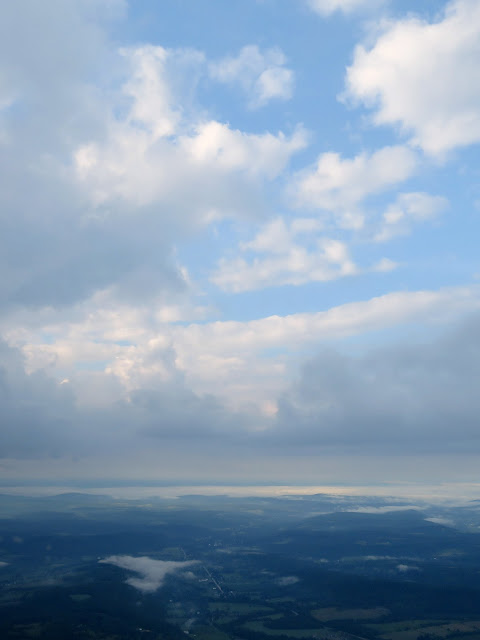 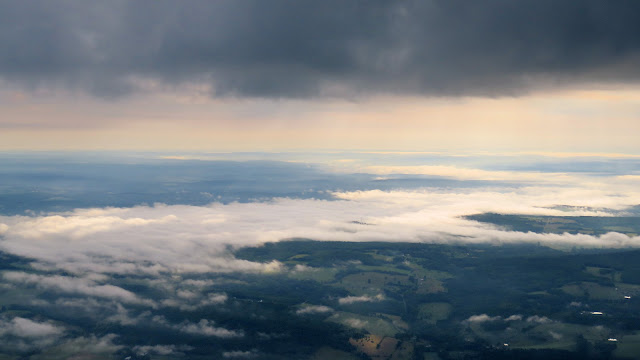 SPLAT! SPLAT! SPLAT!
Without any warning, massive raindrops suddenly pelted Warrior 481's windshield just north of Binghamton, NY. The rain was falling from a particularly dark lump of vapor sagging earthward from the otherwise uniform ceiling. While I appreciated the free aircraft wash, I did not want to enter the low-hanging cloud and smoothly turned farther east to maintain VFR. Tom and Alicia, already flying slightly east of my track, never experienced the rain. Uplinked weather showed a small cell forming several miles to the southwest. 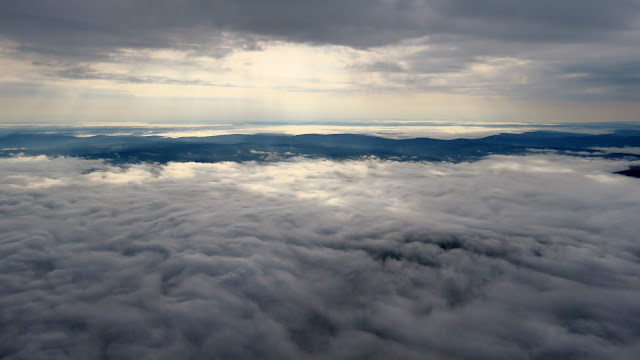 "Cherokee Four Eight One, are you still on course to your destination?"
"Just diverting around some low clouds," I responded. New York Center was keeping good tabs on the two Cherokees bound for Pennsylvania that morning and I always appreciate the concern. 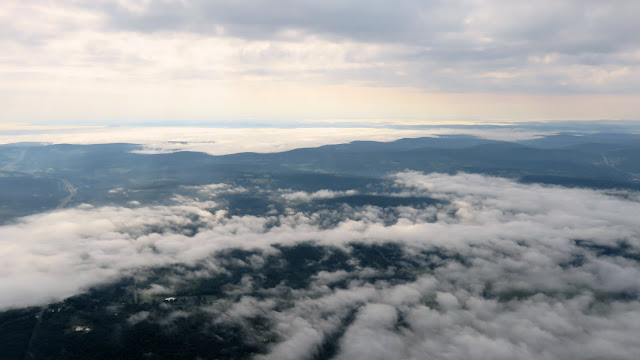 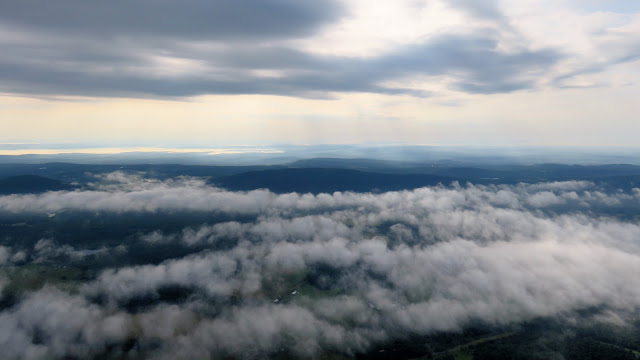 Even in the gloom, there is still beauty. 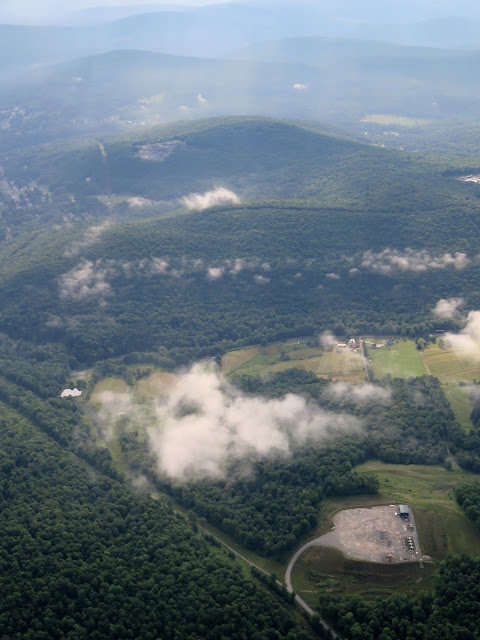 Consistent with weather reports near our destination (which does not have its own weather reporting), we emerged from beneath the ceiling north of Wilkes-Barre. Tom climbed higher for the last few minutes of the flight. I stayed where I was at 4,000 and enjoyed the scenery rolling past. 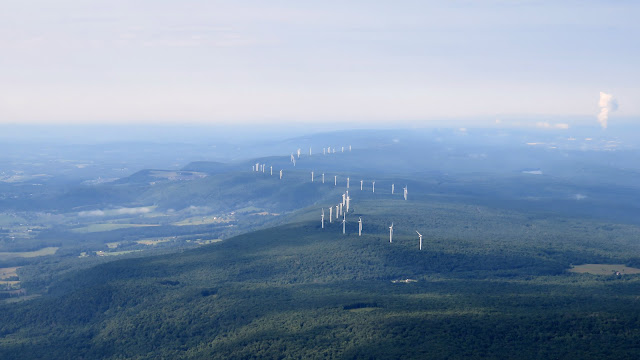 The line of windmills just east of Carbondale, Pennsylvania serves as a ten mile / five minute warning that Cherry Ridge is close. I surveyed the pockets of ground fog ahead and hoped that the airport was not hidden beneath one of them. Sullivan County Airport was about 20 miles to the northeast and reporting a high ceiling and I decided that I would divert there if Cherry Ridge was inaccessible.
I made my worst landing since I started flying again at Cherry Ridge that morning. I would need to make an absolute 10/10 at Sodus on the return flight to balance that Karma.
Breakfast was fabulous. We sat at an outside table, no waiting. I had the Spruce Goose omelet. It is the biggest omelet that they make and thus aptly named. Quite unlike the real Spruce Goose, this one got to fly up at 6500 feet on the way home (granted, in my belly).
We fired up both airplanes after breakfast and, as soon as I flipped the avionics master switch, I heard Lee's voice on the radio. "Cherry Ridge, Colt Seven Zero Zulu..."
When his transmission was done, I keyed the mic. "Lee!" (If I am going to broadcast non-essential stuff on UNICOM, I like to keep it brief.)
Audibly confused Lee responded with, "Who's this?"
"Chris."
From the other airplane, "And Tom!"
I suppose that taught us a lesson about assuming how far our friend was willing to fly in his slower aircraft. Granted, by the time he arrived, we had already eaten and were preparing to depart, but with some proper coordination, we could make it work in the future. 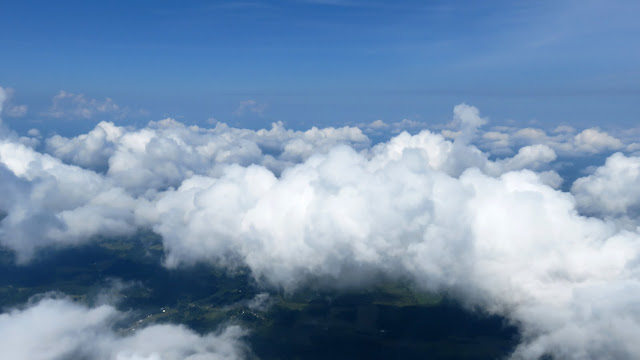 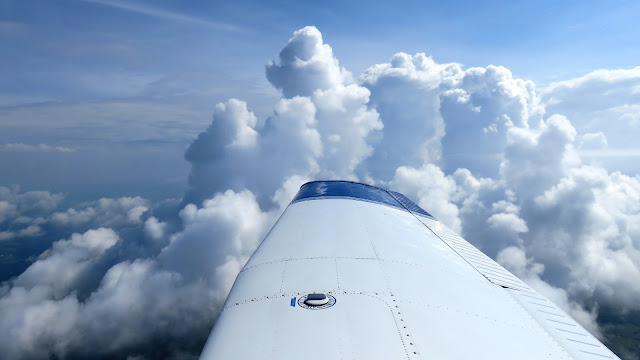 We detoured around a small cell near Binghamton on the return flight. While Tom stayed low, I decided to climb above the lower altitude scud pooling around bases of the build-ups. At 6500 feet, the air was marvelously drier and cooler. 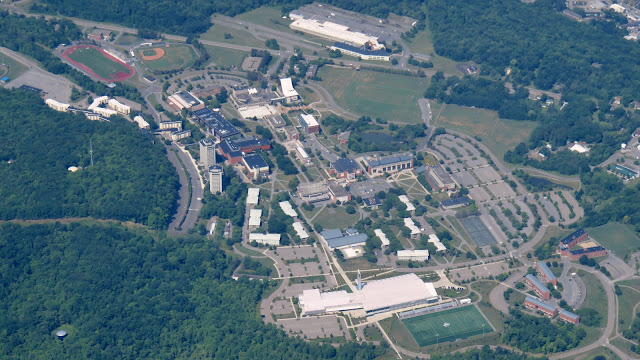 At the southern end of Cayuga Lake, I noticed the campus of Ithaca College where The Bear did a double reed camp last summer with one of her friends. The camp was cancelled in 2020 for obvious reasons, making last year's Ithaca experience seem even further in the past than it actually was. When quizzed about the subject of this picture, The Bear recognized it immediately. 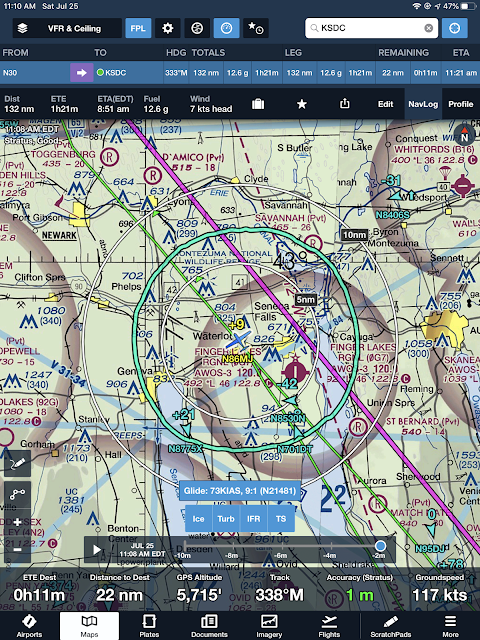 Once back in home territory, I was astounded by the amount of traffic being managed by Rochester Approach. On my traffic display, I spotted Six Mike Juliet at my altitude and cruising due west. It did not take much imagination to realize that we were on a collision course. Even before I had the aircraft in sight, I provided my own separation by descending. Five hundred feet into a descent, Rochester Approach finally called the traffic to me. Had that been my first warning, it would have been too late. This underscored the primary caveat to Flight Following, that it is provided as workload allows and Rochester was too busy to notice the pair of converging VFR aircraft on the edge of their airspace that morning. Separated vertically, I watched the Cirrus fly overhead as our targets merged on the iPad screen. Thank goodness for early warnings.
And the landing at Sodus? It was a 10/10, thus salvaging my fragile pilot ego after the bounce at Cherry Ridge. Of course, the landing at Cherry Ridge had multiple witness. At home, there were none. Typical.
It was just a simple breakfast flight, but still had some lessons to reinforce:
As for the title of this post, I offer my apologies to Led Zeppelin.
Logged by Chris on Saturday, July 25, 2020