After a couple of chance encounters with a group of pilots from Bloomsburg, PA, we were invited to the annual fly-in barbecue lunch at Benton Airport (PA40) in October. Denny, the pilot of a Bloomsburg-based GP4 who made the invitation, sent email reminders throughout the summer to ensure that I did not forget. With such a gracious invitation, how could I refuse?


Benton Airport is a 2,200 foot long private grass strip tucked amid the hills of northeast Pennsylvania and located about 24 nautical miles east of Williamsport. I was not comfortable promoting the trip broadly to the Williamson Flying Club because of the short grass runway. Many of our members lack the grass checkout required to operate club planes on turf. Instead, I circulated an email to pilots that I suspected would be willing to tackle Benton. Ed (Archer II) and Mick (Cessna 152) took me up on it. Additionally, Tom flew right seat with me and Eric joined Ed.


Man on the Scene

Weather maps on the morning of the fly-in showed a concerning number of weather stations reporting low IFR conditions at many valley airports in southern New York and eastern Pennsylvania, including Williamsport. While there was too much magenta showing for comfort, it is also true that IFR conditions across the Pennsylvania terrain can be extremely localized. Before we departed, I called Bob, manager and resident of Benton Airport, for advisories. Perhaps not surprisingly, his line was consistently busy. I tried a few times without success.

Just when I had given up, Bob returned my call. I introduced myself and asked about field conditions and visibility. "Field is dry and firm, visibility is clear and a million. Come on down! We're using runway 21 this morning. Use 122.8 for the frequency and we'll see you soon!" It always helps to have a man on the scene and, when the airport manager actually lives right at the airport, it does not get any more on the scene than that.


I had some trepidation about requesting flight following from Rochester to PA40 because I was not certain that the identifier for the private airport would be in the ATC database. I had a contingency plan ready -- Benton is 12 miles north of Bloomsburg Airport -- but I need not have worried. Rochester acknowledged the request and we turned on course. 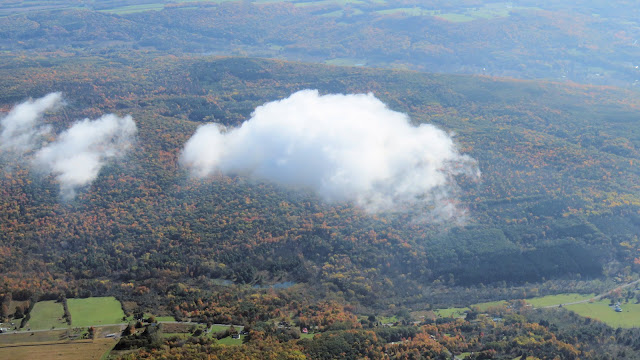 Despite multiple reports for low IFR that morning, conditions improved rapidly as we flew south over a speckled, autumnal vista. 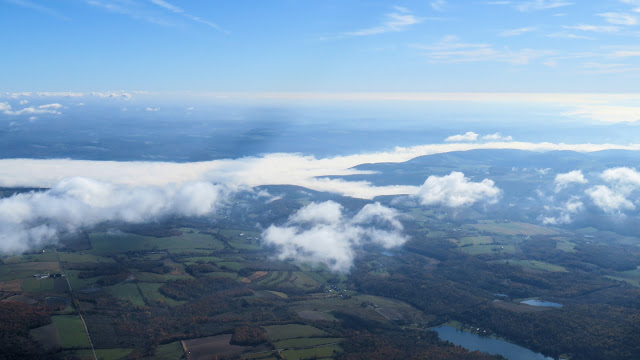 Every so often, a stratospheric contrail is substantial enough to cast a shadow across the landscape. This was one of those times.

"Is there something going on at your destination?" inquired New York Center. "I show several targets converging there." Not much ever gets past the guy at the radar screen.


When we arrived over Benton, there were several aircraft slotting themselves into the pattern and about forty airplanes already on the ground. By flying overhead, we got the lay of the land and allowed the pattern to clear slightly before entering. Southeast of the field, we descended and joined on the 45° leg to the downwind behind a NORDO (no radio) Piper Cub.

As we turned base, a Grumman Tiger called that it was also on a left base. Tom and I looked every which way, but there was no sign of it. I broadcast that we were turning base but did not have the Grumman in sight.

"Uh...Tiger just turned downwind," came a somewhat sheepish response. That was much less alarming because it meant that the Grumman was not a factor for us.

To my surprise, the Cub we were following aborted his landing and rejoined the pattern. I would have expected the short runway to be cause for some go-arounds that morning, but Cubs do not require much runway and I wondered what really sent him around. Benton's runway is actually a couple of hundred feet longer than the runway at Aeroflex where I earned my tailwheel endorsement in a Cub.

Worried about wear on his prop, Mick expressed some concern about the length of the grass at Benton. But the grass was close-cropped and the runway surface itself quite firm and smooth. Benton has a very well-maintained turf runway. 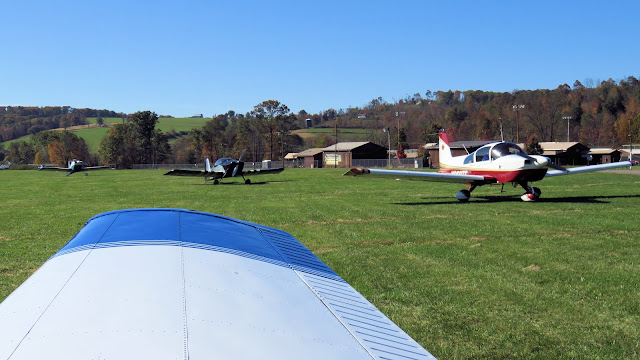 Denny was on the radio directing traffic to parking. "Cherokee, turn right at the blue barrels for parking," he said while we rolled out following a disappointingly flat landing.

Close on our heels came the position-impaired Grumman and a pair of RVs. 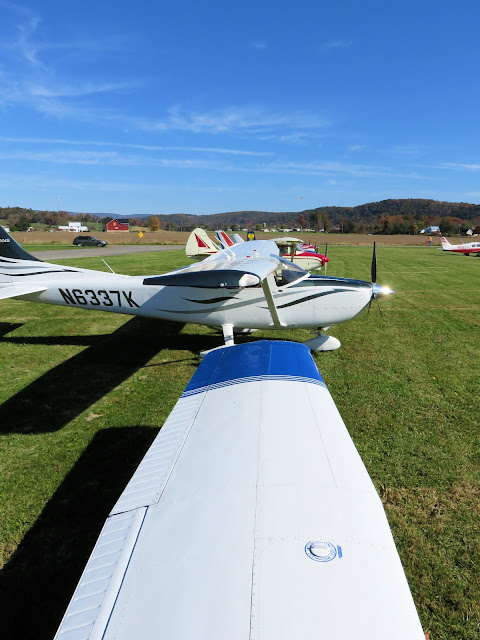 Between the time we overflew the airport and landing, a second line of parked aircraft was created. It was a striking demonstration of how busy Benton Airport truly was that morning because only six minutes elapsed between flying over and bringing Warrior 481 to ground. A lot of airplanes landed during those six minutes. Marshallers directed me to park close enough to a Skylane that our wings had a slight vertical overlap. Benton was planning on a lot of traffic.

Upon touching down at Benton Airport, I crossed a new personal threshold. Benton was my 200th airport since I began flying in 2001.

With Ed, Eric, and Mick still en route, Tom and I loitered in the parking area to watch the steady stream of aircraft arriving for the barbecue lunch. 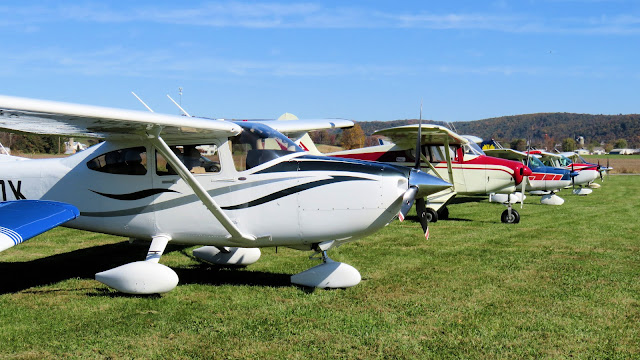 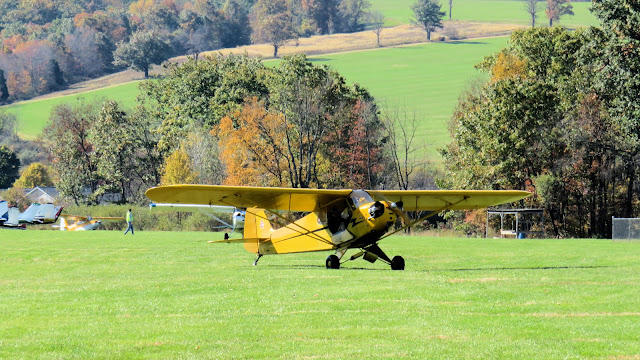 I was pleased to see the Cub that went-around finally make it in. To be denied the grass is a terrible thing for a Cub.

This airplane looked familiar. I think I've encountered it before. Maybe that one time in Oklahoma?


Our new friend, the Grumman from the pattern, was parked right next to us. I meant to give the pilot a good-natured "you had me going for a moment there" remark, but he avoided eye contact with me entirely and hurried off after disembarking. The crucible of a busy traffic pattern did not make an ideal set-up for friendly ribbing, I suppose. 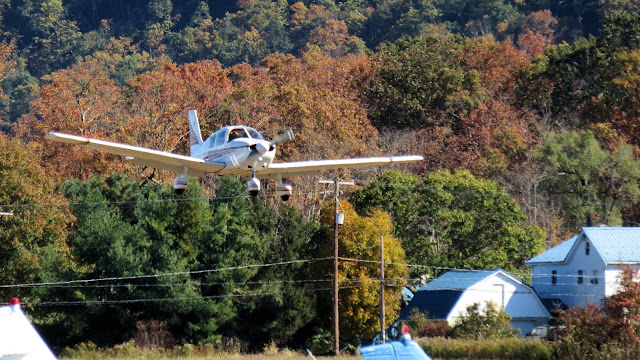 A familiar Archer lined up on final. Ed acquitted himself quite well on his first grass landing. The flight to Benton was a milestone for him, too. 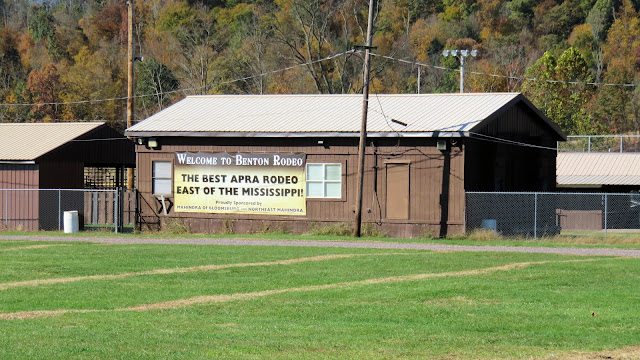 A rodeo facility next door explained the existence of the parking area we were using. It definitely appeared to be laid out for cars, not airplanes. 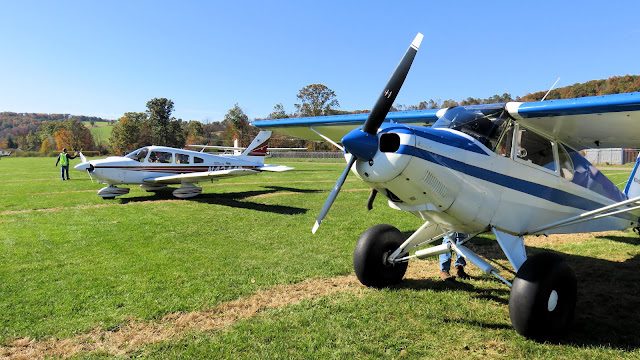 Ed was directed to park Four Four Papa next to a distant relative, a Piper Super Cruiser. 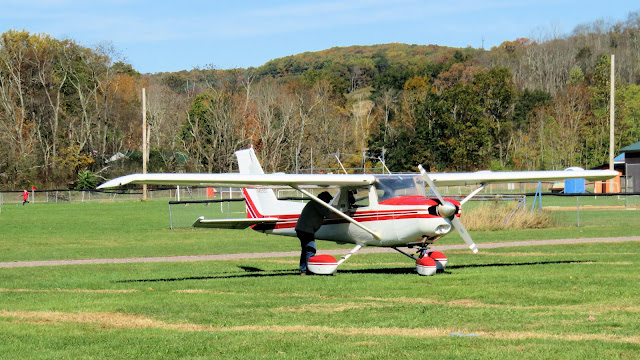 Though Mick was not far behind Ed, the second row of parked airplanes was full by the time he arrived and he was directed to park his 152 in a third row. In all, the tiny grass runway received 105 aircraft for lunch that day. 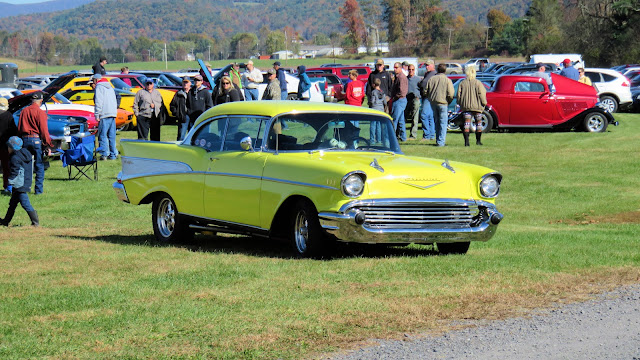 We were so taken with the number and variety of visiting aircraft parked around the field that we scarcely noticed the cars in attendance. I have to hand it to 1950s automotive engineers. I consider this to be Detroit's "romantic period" and the designs are still beautiful decades later. There are times that I regret growing up in an era of poorly-built, uninteresting cars. No one will ever show up for cruise night in a 1985 Sunbird like the one I drove as a college student because they were boring and disposable and most did not survive into the 21st century.


"Welcome to PA40, Benton, PA. Thanks for dropping in!" read the sign over the main hangar where food was being served. At Benton, a meal could be had for the cost of a donation. Hay rides and apple cider pressing were ongoing the entire time.

In early 2019, Benton Airport was savaged by a tornado that destroyed a couple of buildings. One pilot told us that he used to base a Piper Arrow at Benton and fortuitously sold it just a few days before the tornado flattened his hangar. Although the fly-in barbecue is an annual event, part of the 2019 objective was fundraising to effect airport repairs. 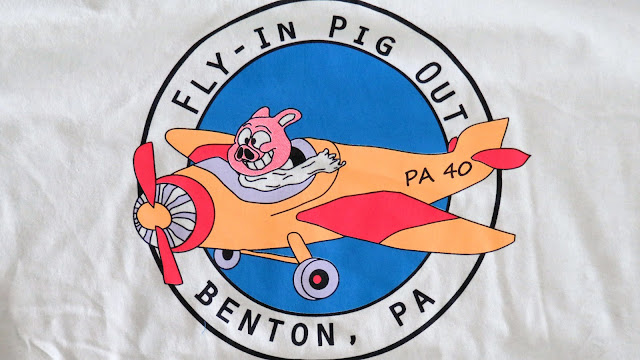 Pilots received a free T-shirt on check-in. There is nothing quite like a cross-eyed porcine pilot. Thankfully, we did not encounter anyone matching this description in the airport traffic pattern that day.

Denny promised me that Benton would serve up a superior spread compared to the average fly-in breakfast. He was absolutely correct. There was pork barbecue, baked beans, corn casserole, coleslaw, a plethora of homemade deserts (I had a slice of triple berry pie), and homemade ice cream that my internal ice cream radar failed to detect (a personal fail for the day).

Our group enjoyed the whole Benton experience (except for missing out on the homemade ice cream). With my newfound experience at Benton, I will attempt to organize a broader club effort next year. The short grass runway will definitely be a deal-breaker for many, but those willing and able to participate will be well-rewarded with a great experience. 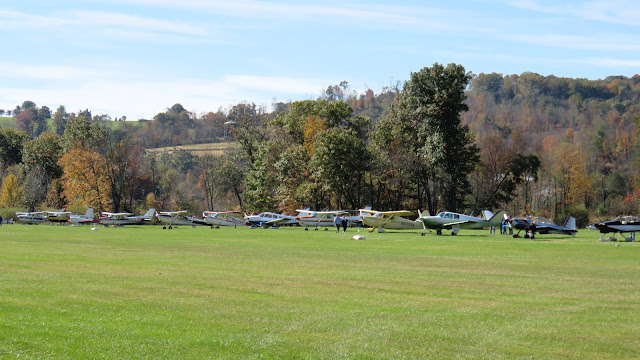 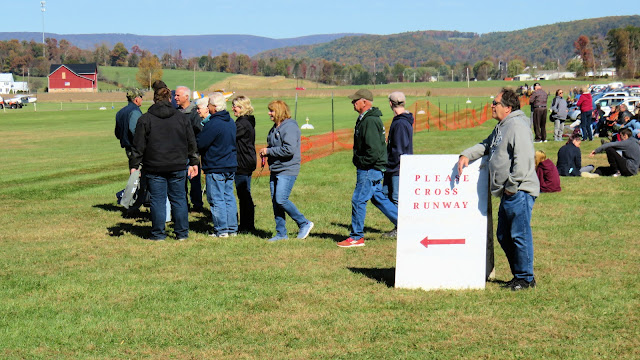 Aircraft parking was separated from the food by the runway itself, requiring a designated pedestrian crossing area. After witnessing a couple of close calls with pedestrians walking in front of aircraft operating on the runway, I wondered if a pedestrian caused the Cub's go-around that morning. When one of the Benton pilots shouted at a man strolling casually across the runway in front of a departing airplane, the fellow retorted, "They have brakes, don't they?" The word cavalier came to mind along with others that are less polite.

After lunch, the parade of departures was even more concentrated than the arrivals had been. We were amazed by how quickly aircraft parking emptied out while we loitered to watch the show. 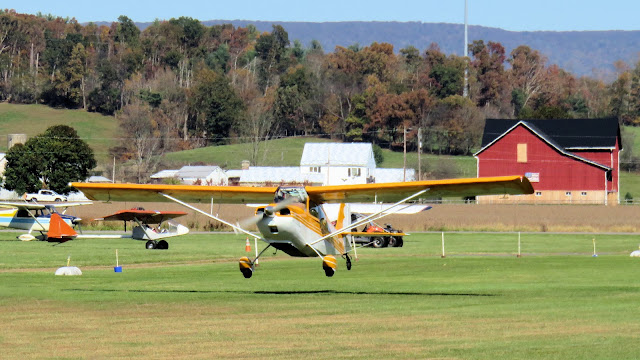 Citabria symmetry; I caught the same airplane in the air both arriving and departing. 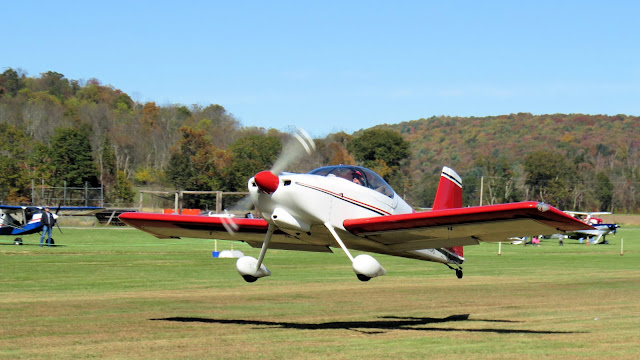 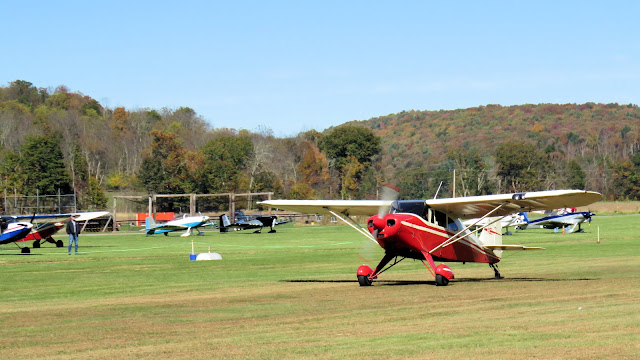 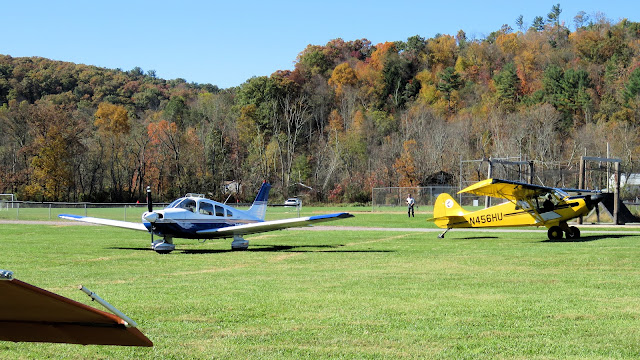 We hiked to the end of the runway to greet Denny who still manning the radio. "You made it!" he exclaimed. We complimented Denny on his arranging such excellent weather for the event. 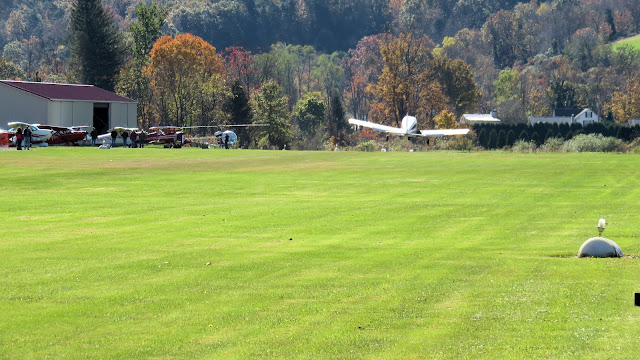 We watched a Cherokee 140 make a decidedly marginal takeoff, but I am not convinced that I coaxed much better performance out of Warrior 481. My days of routinely flying from grass ended in 2005 (thanks a ton, UberCo) and I was clearly rusty. 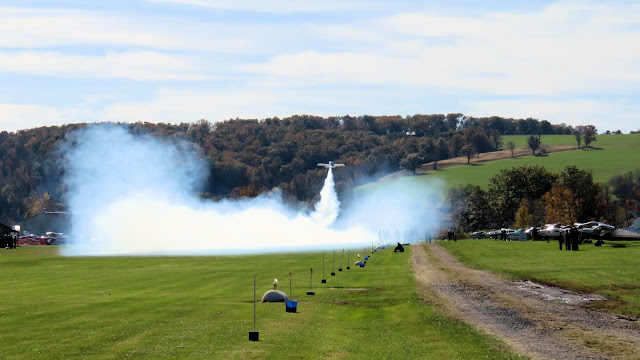 A few of the itinerant experimental aircraft were equipped with smoke systems to make for showier departures... 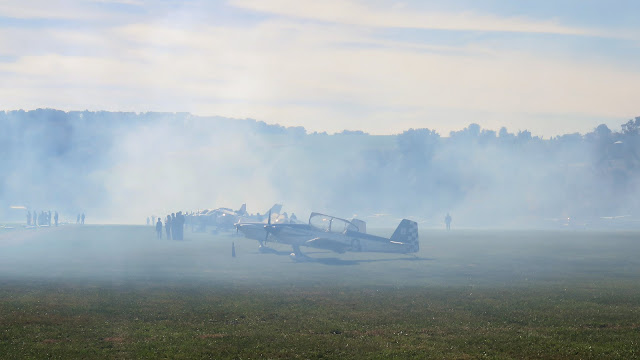 ...and to render the airport temporarily IFR in their wake. 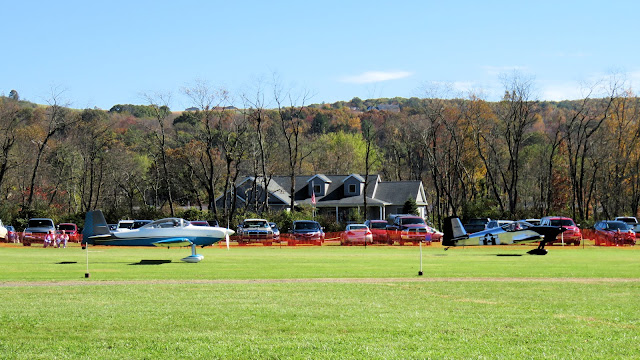 The RVs that arrived just behind me departed in formation. 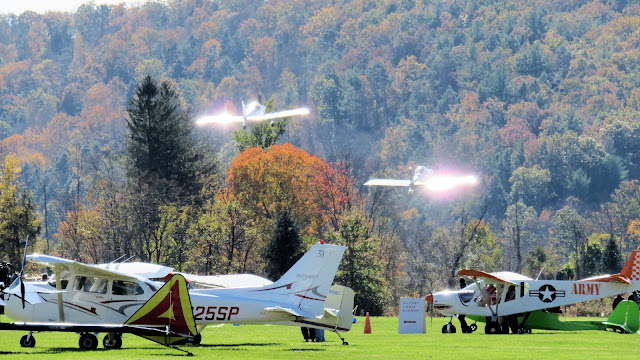 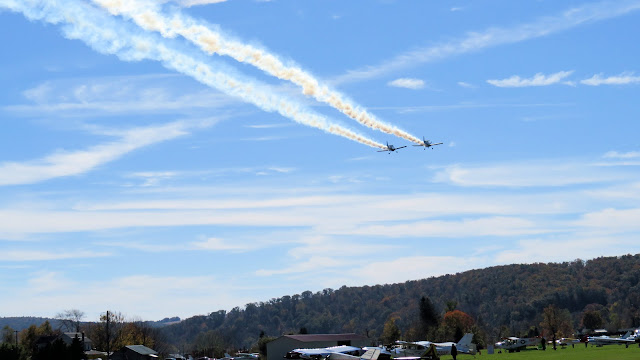 Coming back around, the pair zoomed over the field with smoke on.

My departure was somewhat marginal; 2,200 feet of grass makes for a more challenging take-off than what I am accustomed to. A hillside rises steeply off the end of runway 21, but a left turn  allowed us to follow lower terrain while the Warrior pulled us skyward. 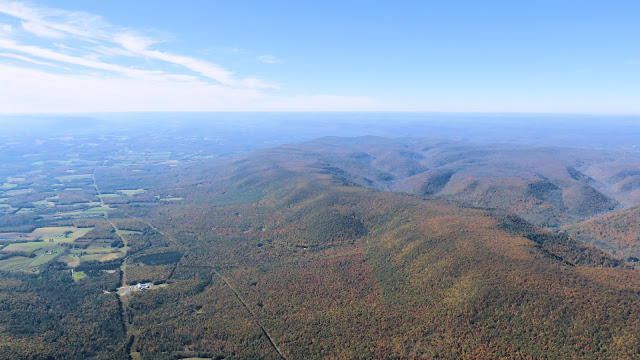 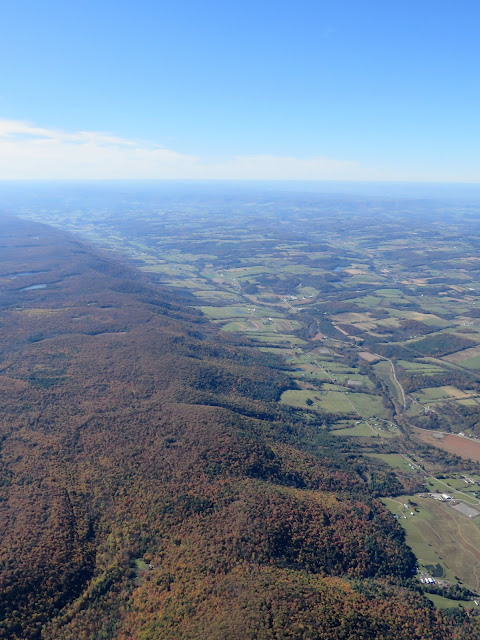 We arrived back home over Sodus with peak fall color on display along the southern Lake Ontario shore. 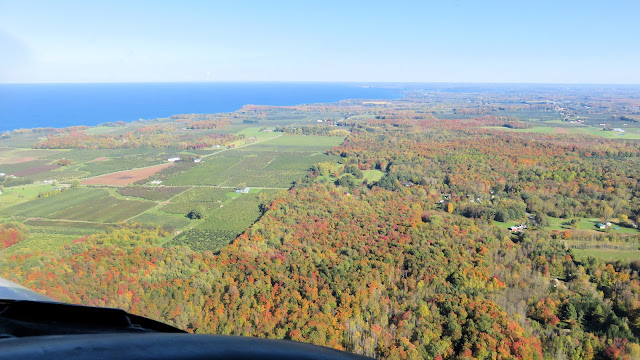 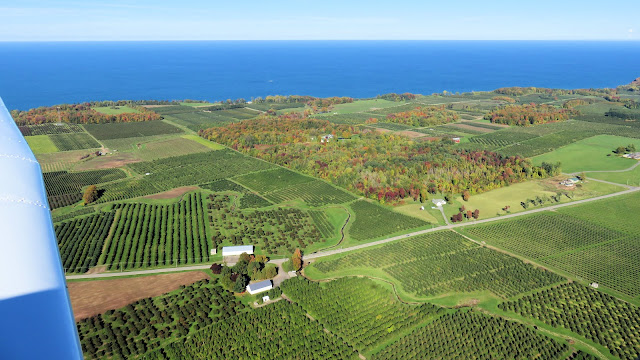 Pigging out came with a lot of fringe benefits: flying with friends, seeing a variety of interesting airplanes, getting my grass runway fix for 2019, landing at my 200th airport, strengthening connections with other northeast pilots, and...