My Patronus Is an Airplane: Manhattan Express

At the risk of oversharing, my wife is an addict.

Specifically, she's addicted to high quality, live theater and the addiction is obviously contagious because, at some point since I met her 30 years ago, I developed it too.

As a result, New York City has been a regular destination for us and, over the years, we have refined our method of travel there. My first trip to NYC was on a bus from Michigan full of recent high school graduates. (Hey Dante, which circle is that?) It was a great trip, but the travel was definitely tedious, particularly because of the enthusiastic young man who sat directly behind our nervous and inexperienced Hoosier bus driver and pointed out every mistake that the man made. I suspect that the poor driver was just one more "Hey, you just ran a red light" outburst away from a nervous breakdown.

When we moved to Rochester, we started going more frequently and adhered to a couple of rules. Number one, I have no desire to drive in Manhattan. Number two, I have no desire to pay for parking in Manhattan. For years, we drove from Rochester to Poughkeepsie (5 hours), then rode the commuter rail to Grand Central Station (up to 2 hours) before walking to whichever suitable Times Square area hotel had the best rate at the time. 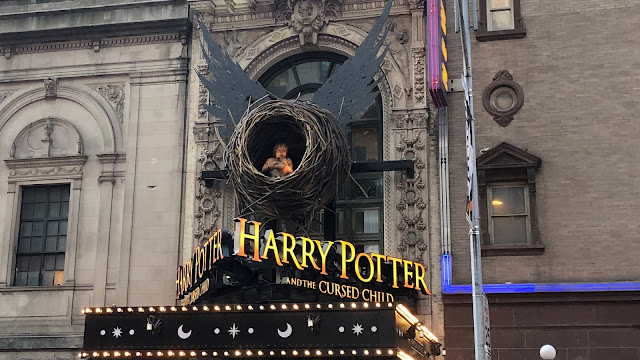 It was better than the bus full of teenagers, but still made for a long travel day. When Upstate NY legalized ride sharing services (e.g., Uber and Lyft), flying the Warrior became a possibility because ride sharing solved the ground transportation problem between the airport and the train station. Last year, we simply substituted flying to Poughkeepsie for driving there, thus swapping a five hour drive for a two hour flight. Not bad.

This year, with tickets for Harry Potter and the Cursed Child in hand, we did even better. We launched from the Williamson Sodus Airport at 8:00 am. By 11:10 am, we had already dropped our bags at the hotel and were being seated in a Hell's Kitchen area restaurant for lunch. It was our quickest and easiest trip to NYC yet.


The key to this successful trip was flying into Essex County Airport (otherwise known as Caldwell, #196) across the river in New Jersey. Giving credit where credit is due, this was Colin's recommendation and it was a great one. 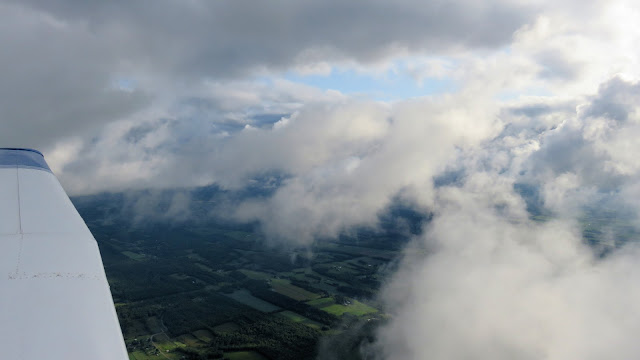 We departed Sodus on an IFR flight plan cleared direct to Caldwell. The radio crackled with familiar voices and call signs as a large contingent from the Williamson Flying Club launched at the same time for a fly-out to Piseco in the southern Adirondacks. There were evidently a few members confused when we departed with the larger group, but did not appear at the pancake breakfast hosted by the Speculator Lions Club. (Incidentally, one of my pictures of Warrior 481 on the ramp at Piseco was "borrowed" to promote the event without my consent, so that's something. I wonder if it would have earned me a free breakfast if I had gone?)

We spent a few minutes climbing through the clouds before reaching clear sky, keeping tabs on our friends through their interactions with Syracuse Approach. With a mild tailwind, we averaged 125 knots at 7,000 feet.


We enjoyed calm air the entire way. After the heat we experienced during the flight from Cleveland to London, KY just a month earlier, I was surprised that running the heater was necessary to keep the back seat habitable for The Bear.


Considering that we were bound for New York Approach's airspace, IFR re-routes were inevitable. It was the controller at Binghamton who first broke the news to us.

"Ready to copy," I responded while extracting a pen from my kneeboard.

In lieu of our direct route, we were cleared to the Hancok VOR, then V167, WEARD intersection, V489, COATE intersection, direct. I was pleased that my read back was spot on. As always, I needed the IFR chart to translate Victor airways into waypoint vertices that the Garmin 430 understands. I programmed the new route into the navigator while hand flying and tracking to Hancock using the VOR. I have not had much need to set up full route clearances in the 430 while airborne this year, so it was excellent practice, but it kept me busy. When people talk about high workload in single pilot IFR operations, this is exactly the sort of thing that they mean.


Binghamton transferred us to a quiet sector of Boston Center, creating an illusion of low traffic in the area even as New York City materialized out of the haze. Once we were switched to New York Approach, however, the radio simply never shut up. 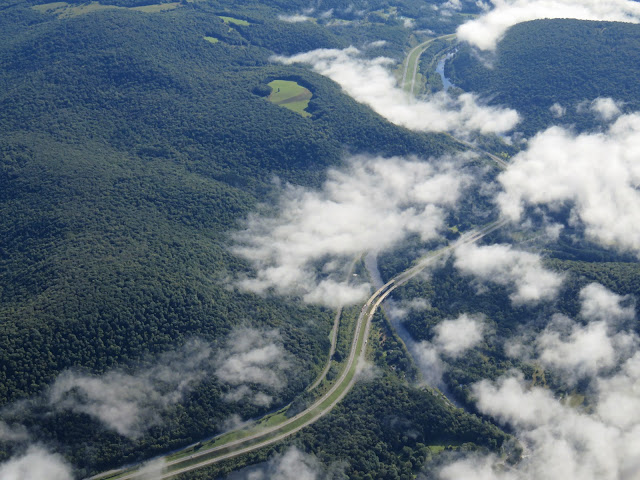 New York Approach tinkered with our zig-zagging route, providing shortcuts that had to be managed within the Warrior's navigation system. Finally, we were vectored entirely off the cleared route, then cleared direct to Caldwell. I may have dialed in that entire route, but we only flew about half of it.

Caldwell Tower was busy. We joined the fray as the fifth aircraft in the pattern while even more airplanes made their inbound calls from a few miles out. One of the inbounds was a very timid-sounding solo student and I wondered if she knew what she was getting herself into. Below, four aircraft waited to depart. Our controller was a trainee and she asked us to follow a Cessna that was actually a Cherokee, but aside from that bit of confusion, we merged into the pattern and landed without a problem. Actual flight time: 1 hour, 43 minutes.

From Broadway Bound to Air Bound 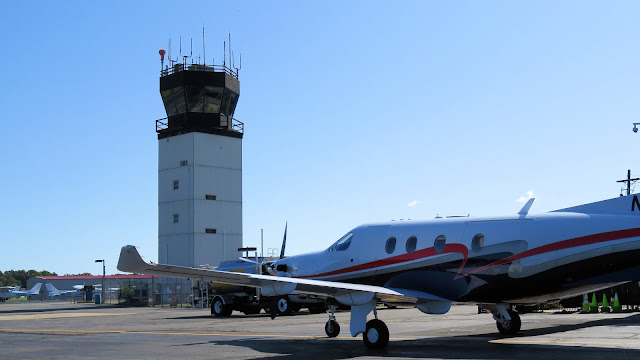 We parked at Air Bound, the sole FBO at Caldwell. It should not come as a surprise to anyone that airplane parking so close to The City is not free. Air Bound charges $20/day, plus a one time $25 ramp fee (waived with purchase of 20+ gallons of fuel), and the county charges a $10 landing fee (billed through the mail -- quite promptly, I might add). We bought the requisite amount of fuel to waive the ramp fee such that, minus fuel, the flight into Caldwell cost us $50 total. 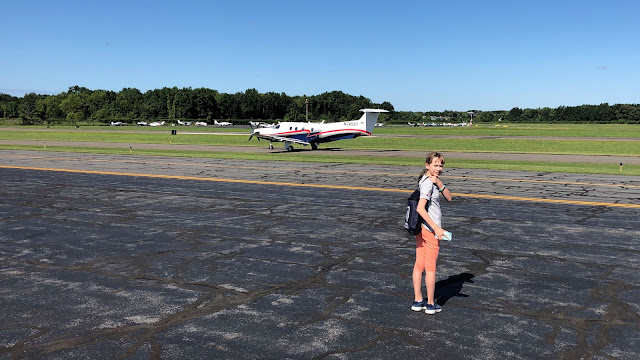 After buttoning up the Warrior, I looked around for The Bear and spied her taking photos of the departing Pilatus. Something about apples and trees came to mind. 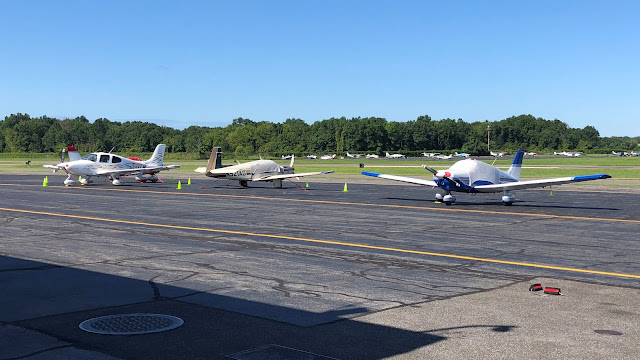 With the Warrior bundled up in her away-game jersey, we requested an Uber into Manhattan. The FBO staff indicated that they have never seen anyone wait more than ten minutes for a ride. Our experience failed to refute that track record and, by 10:15 that morning, we were on our way to The City.

Along the way, we passed MetLife Stadium and the Meadowlands Sports Complex. I suspect that game days would create significant traffic delays for the trip into Manhattan; good to know for next time.

Before entering the Lincoln Tunnel, I pointed out to The Bear that we were in Weehawken. She responded with a blank look. "It's where Hamilton was shot," I reminded her.

She grinned and nodded. "Everything is legal in New Jersey," she quoted back at me.

It is fortunate that our hotel was located on 40th Street between 8th and 9th Avenue and close to the Lincoln Tunnel because we emerged from under the Hudson River into gridlocked traffic. While traffic is always dense in Manhattan, this was worse than usual. Stopped in traffic a block from our hotel, we volunteered to walk the rest of the way.

The Uber ride was 45 minutes and cost $50. On a side note, we were quoted $50 dollars by the app, but charged $80. The Uber receipt showed that we traveled from Caldwell to Manhattan, then back through the Lincoln Tunnel for a drop off in Weehawken for a longer than planned ride. I disputed the charge and Uber refunded the extra $30 within hours. 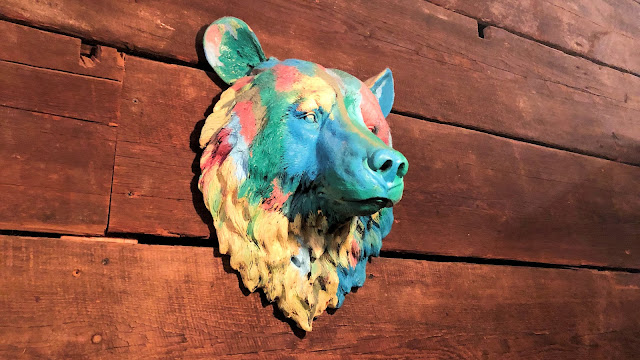 After dropping our bags at the hotel, we found lunch on West 46th St at the Hell's Kitchen Bareburger, a delicious burger place with an emphasis on food from sustainable sources. OK, I'll admit that we were first attracted to the place because of the whole "bear" thing, but with that said, it worked out well.


Best of all, we were seated at 11:10 am, just over three hours from the time we launched from Sodus. We still had most of the day ahead of us instead of arriving travel-weary much later in the afternoon.


I could not talk The Bear into trying a bison burger. Nevertheless, everyone's food was excellent, even if the lighting in our booth was not when it came to taking photos. The Bear and I particularly recommend the waffle fries.

How did all of this work out economically? When we flew to Poughkeepsie and took the train into Manhattan, the round trip train tickets for three of us cost $115, plus $30 ($15/night) airplane parking for a couple of nights in Poughkeepsie, plus $33 Uber round trip between the train station and the airport for a total of $178. Flying into Caldwell saved a few hours and cost about $200 ($50 for the airport, $50 for the Uber to Manhattan, $100 for the Uber out of Manhattan during a peak time on Monday morning).

In the grand scheme of things, the cost was a wash (in aviation price-structures, $12 is practically round-off error) and the convenience of flying into Caldwell was significant. I always enjoy visiting New York City (emphasis on visiting). As pleased as I was to be there, I was particularly pleased with HOW we got there. Score another success for our time machine.
Logged by Chris on Saturday, August 24, 2019