On winter's edge with traces of snow accenting higher terrain, we circumnavigated Seneca Lake on a sightseeing cruise. At 38 miles long, Seneca is the second longest of New York's Finger Lakes. It is the largest in volume and, with a maximum depth of 618 feet, it is considered the deepest lake in New York State. With 75 miles of shoreline, Seneca Lake lies ribbon-like across the landscape.

Once past Geneva on the north end of the lake, we proceeded south along the western shore as wine country passed below the Warrior's wings. 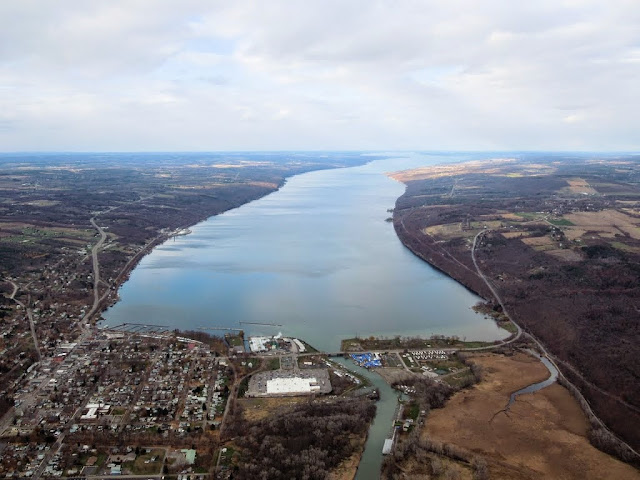 Watkins Glen lies at the south end of Seneca Lake, known for its magnificent eponymous geological formation (and a race track or some such thing). From above, the actual glen is so narrow that it appears as little more than a crack in rising terrain. 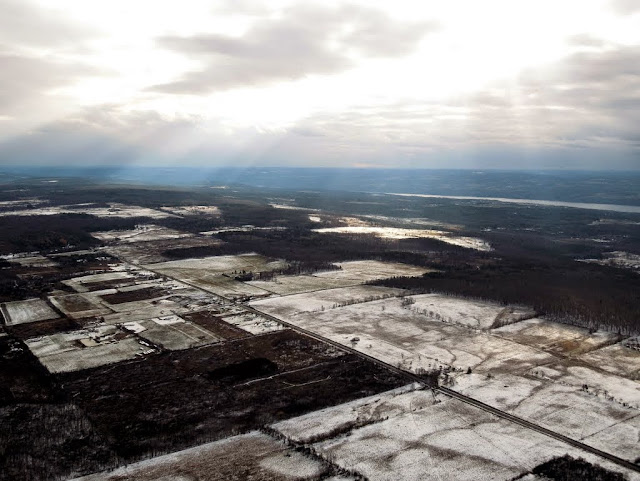 To the south, higher terrain appeared to converge with a broken ceiling through which sunbeams illuminated remnants of the season's first snowfall. 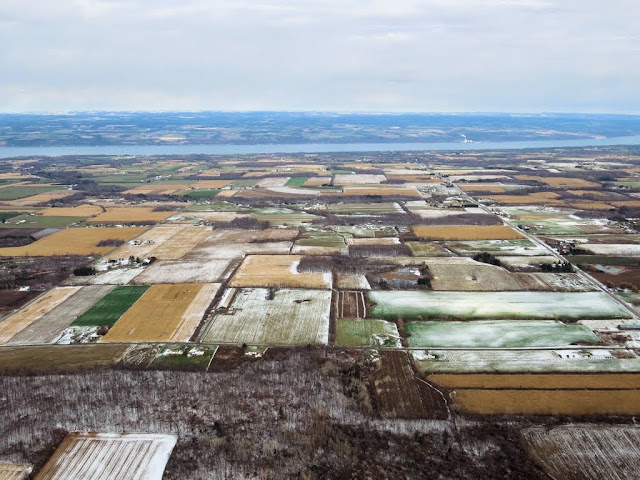 To the east, with Cayuga Lake in the distance, snow remained in a state of tenuous equilibrium on higher elevation fields. 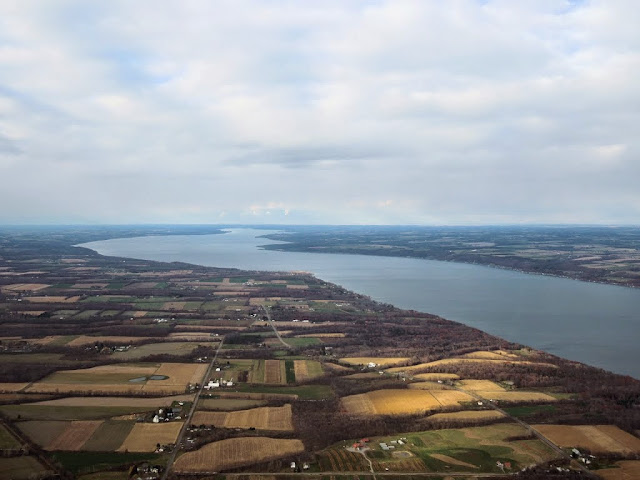 Cayuga Lake, inscribed across the landscape in a twisting course not-quite-parallel to that of Seneca, is the longest of the Finger Lakes.

Proceeding north along the eastern shore of Seneca Lake, we encountered a large airport. 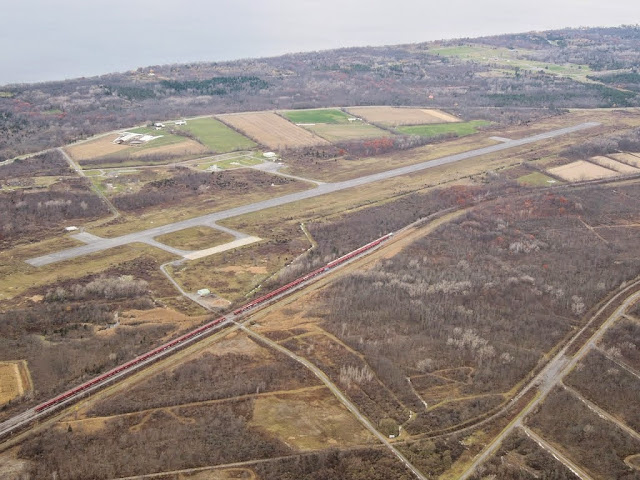 It was the former Sampson Air Force Base / Seneca Army Airfield, a closed military facility whose massive runway survives in apparently pristine condition despite years of neglect. 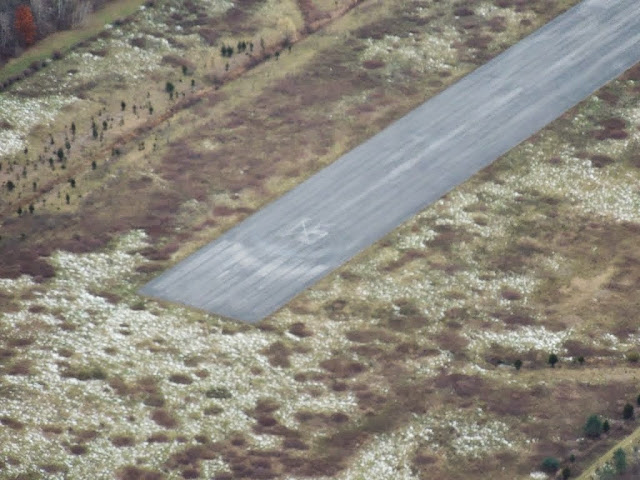 At the northwest end, faded paint hints at the piano key and runway 16 markings that once existed there. Now, even the "X" painted across "16" to formally close the runway has faded to virtual nonexistence. Of the many closed gateways to the sky that litter upstate New York, this is one of the most magnificent. As emergency landing fields go, this one would serve more capably than most. 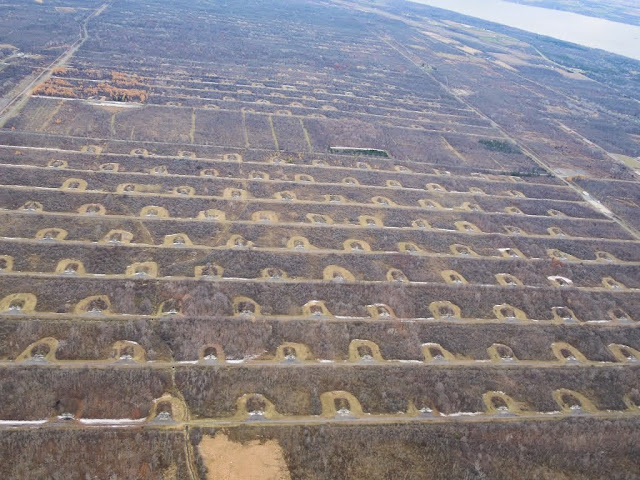 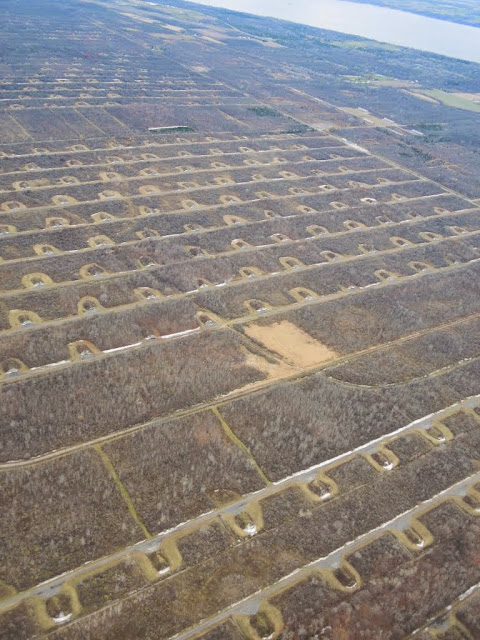 An unusual pattern is etched across the adjacent land, remains of the former Seneca Army Depot constructed in 1941. It was a munitions storage and disposal facility made up of an array of concrete "igloos". Some of these igloos once stored radioactive materials from the Manhattan Project, which strikes me as a curious use for prime farm land tucked between the two largest Finger Lakes.

I concluded the flight with a few practice take-offs and landings in a moderate crosswind at Williamson-Sodus. Satisfied, I stowed the Warrior away in her hangar until our next flight together.
Logged by Chris on Saturday, November 15, 2014