I recently started transcribing my logbook into an electronic format after a computer crash last year wiped out my previous electronic version. While this activity was the very essence of tedium, it was also enlightening. I realized that I used to spend a lot of time drilling on the basics: airwork, performance take-offs, simulated engine failures, etc.

Although I still drill on the basics, I do so less frequently than I used to.

So today, I made time to fly and the weather (for once) was cooperative.  I ran through much of the private pilot repertoire, starting with the pattern.  I made eight trips around the pattern, performing a mixture of take-offs and landings that included: normal, short field, and soft field.  Some of the landings were done with full forward slips, with simulated engine failures, or without flaps.  I have not performed a no-flap landing in some time, but was pleased with tonight's result. 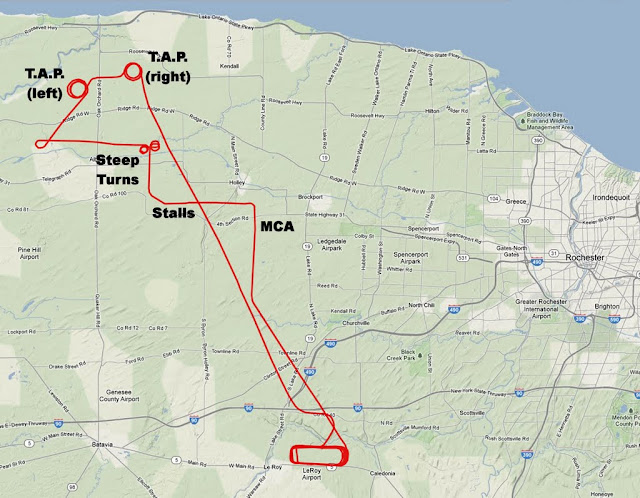 Thus warmed up, I departed the pattern (yes, I realize that the pattern exit is non-standard, but it kept me from busting Rochester's airspace).  I flew north at minimum controllable airspeed (MCA), turned west and did a set of power-on and power-off stalls, ending with a power-off stall in a right turn.  After recovery, I executed a set of steep turns (two complete 360° turns in each direction), then descended for turns-around-a-point.  I made three turns around my ground reference point to the left and two to the right.  I cannot even remember the last time I did a turn-around-a-point to the right, but I am reasonably certain that it was in a Cessna 150 about ten years ago (I know, shame on me).  Regardless, both look reasonably round to me in the GPS ground track above. 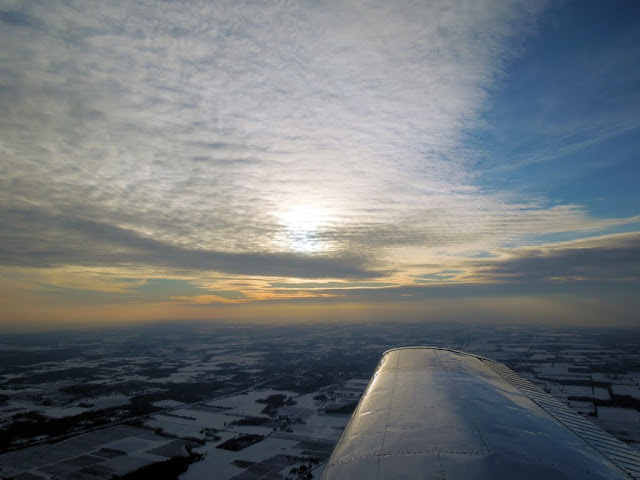 As an added bonus, I got to see some blue sky for a change.

Though I was a bit rusty at times, every maneuver was within tolerance.  At the end of it all, I shut down the airplane with a sense that I had given myself a good workout.

I suspect that most pilots have a maneuver or two in their repertoire that they do not practice often.

What are you waiting for?
Logged by Chris on Tuesday, February 05, 2013