On approach, a mighty North American city slowly materialized from the haze. The roots of its steel and concrete structures were set deep in the Earth along the western edge of a Great Lake. Our destination was a small island off the waterfront, home to a bustling airport.

At first blush, it might seem as though this tale occurred prior to March 2003, before Chicago's Mayor Daley ordered the wanton and illegal destruction of Merrill C. Meigs Airport. Or perhaps the inbound aircraft flew in an alternate universe where the headstrong Chicago mayor failed in his efforts to ruin a jewel of a downtown airport.


The simpler answer is that we were in Ontario, Canada and about to land at Billy Bishop City Centre Airport (CYTZ) in Toronto. In this case, maybe the alternate universe hypothesis is not so far off, after all. I often think of Toronto as an alternate universe version of Chicago: cleaner, friendlier, and still blessed with an amazing waterfront airport.

Like many pilots who grew up on Flight Simulator by subLOGIC / Microsoft, I had dreams of flying to Meigs Field, the default starting point in the software. Those dreams were rendered moot within six months of earning my pilot certificate when the airport was destroyed. As a result, I have wanted to fly into Billy Bishop Airport since the moment I first learned of its existence. As an added incentive, Toronto is a special place for me and Kristy. We started dating after a 1990 class trip to Toronto. Our last visit there was in 1995, so we are overdue for a return.

We have been flying through Canadian airspace between Buffalo and Detroit routinely for eleven years and might have landed in Canada sooner were it not for a single hurdle: a bureaucratic customs process that made me nervous. Nonetheless, I decided that 2017 would be the year we landed in Canada and I set about understanding the process one bit at a time.

If those seeking to hitchhike the galaxy are advised to bring their towels, private flyers seeking to land in another country would best bring their wallets.

In preparation for this flight, we needed:

We chose May 27-28 for our trip about a month in advance and booked a room at the Delta Toronto Hotel, a high rise glass-encased tower near the waterfront. The room could be cancelled as late as the night before if weather was not going to permit a flight. Forecasts fluctuated in the days leading up to the trip and, as late as the evening prior, I was certain that an instrument approach would be necessary to get us into Billy Bishop Airport.


A direct route from Sodus to Toronto would have saved time, but I wanted to reduce our over-water exposure and opted to stay over the south shore of Lake Ontario for most of the flight, then cut across the narrow western end of the lake. This route seemed a fair compromise and, though there were a few minutes that would be spent beyond gliding distance of shore, the amount of time was minimal.

On the morning of the flight, Sodus was low IFR in fog. We planned a 9:15 departure with a 10:30 arrival in Canada both to avoid rushing around that morning (and making mistakes while working the bureaucracy) and to allow the fog to burn off.

In addition to the usual pre-flight activities, several additional steps were necessary before undertaking the flight: 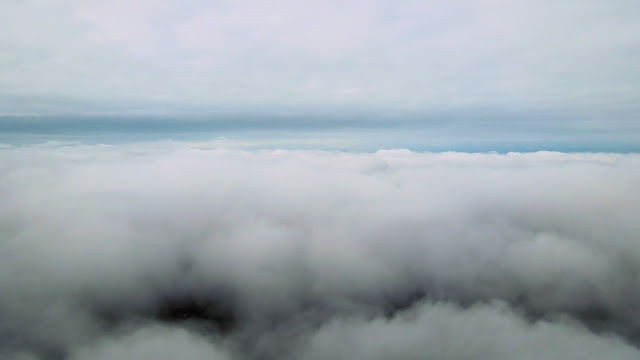 We launched into a 1100' overcast after receiving our IFR clearance ("cleared as filed") over the phone. It was the first time I had received a ground clearance by phone since training for my instrument rating. My instrument scan was a little sloppy on the climb-out, but quickly tightened up as I settled in to flying in the murk. 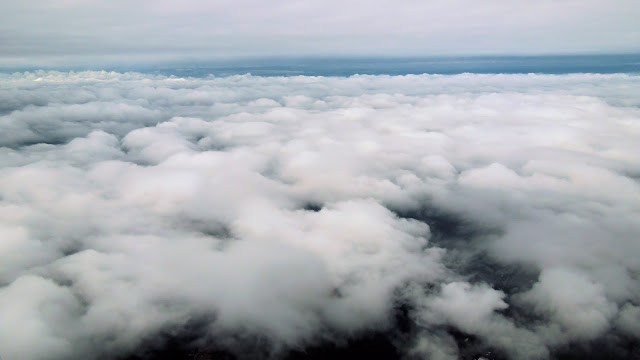 After climbing through the initial cloud layer over Sodus, we flew between layers for a few minutes before entering the clouds for much of the flight along the Lake Ontario shore. Roughly 70% of our one hour flight was in solid IMC. I had been looking forward to the sight of the Toronto skyline on approach and began to wonder how much of the waterfront we would actually see on arrival. Still, it felt great to get actual IMC time again with impunity. Low clouds and concerns about icing had already led me to cancel three flights during the relatively cold spring of 2017.

As usual, I monitored Guard on 121.5 MHz. During this time, we were treated to several loud outbursts addressed to someone named Jimmy and a couple of audio samples of Chewbacca growling, the latter of which is evidently a thing now. The Bear was amused and the adults were unimpressed. 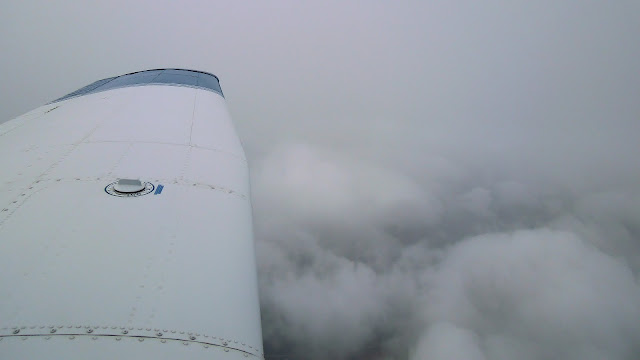 I was already familiar with a lot of Canadian ATC phraseology differences: "radar identified" instead of "radar contact", "decimal" instead of "point" when providing frequencies, and radar facilities described as 'Terminal" rather than "Approach". For example, "Cherokee Four Eight One, radar identified, contact Toronto Terminal on one three three decimal four." After years of talking to Canadian controllers, I felt right at home when Buffalo transferred me to Toronto Center.

Toronto Center offered to turn us direct to City Centre (as ATC refers to Billy Bishop Airport) just east of the Niagara River and HWYYN intersection (wasn't that a horse in the Chronicles of Narnia?). This was a slight alteration from my filed route, but I decided that the additional time over water would be insignificant.

While planning, I considered the scenario of a missed approach at Billy Bishop if the weather was below minimums for the available instrument approaches. After all, customs was expecting us at Billy Bishop at 10:30 am and flying into an alternate Canadian airport would not do. We carried 5.5 hours of fuel on board, so I filed Rochester and Sodus as alternates. If we could not get into Billy Bishop that morning, we would simply return home. Without a landing on Canadian soil, we would not need to clear customs to re-enter the United States.


Take Off for the Great White North

Before going feet wet over Lake Ontario, I checked Billy Bishop's ATIS: 9 mile visibility, ceiling at 5500 feet, visual approach runway 26 in use. My concerns about the weather being too low for landing vanished. 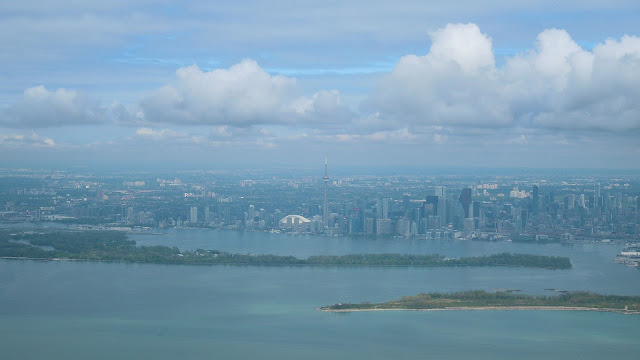 As we crossed the lake, Toronto emerged from the gloom, a broken layer hovering above as advertised by the ATIS. 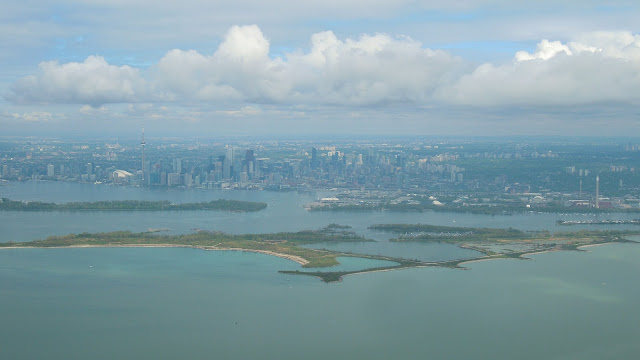 Billy Bishop Airport was busy that morning. We were number four to land and vectored for a visual approach with a six mile final. According to the airport website, Billy Bishop is the 9th busiest airport in Canada. 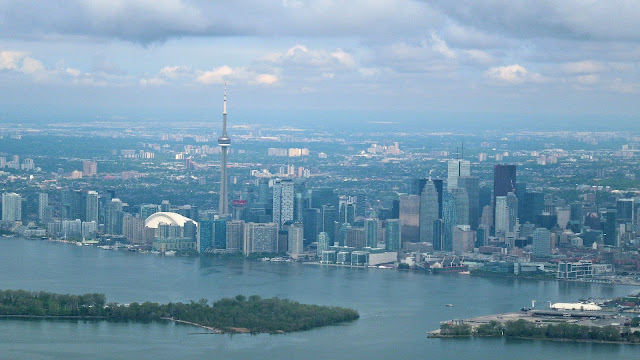 As we passed this tall smoke stack in the departure corridor for runway 8, it was obvious why departures from that runway required a higher than standard climb rate. We would find ourselves climbing directly toward it the very next day.

The city finally emerged from the haze, popping into clear focus as we paralleled the shoreline on a long final approach for runway 26.


I can say without hyperbole that I greased Warrior 481 onto our first foreign runway.

We slowed to a stop, exited on taxiway Foxtrot, and held short for conflicting traffic (a Porter twin turboprop and a Cessna) before taxiing straight ahead to the Porter ramp where we shut down and called Canadian customs via the CANPASS telephone number. 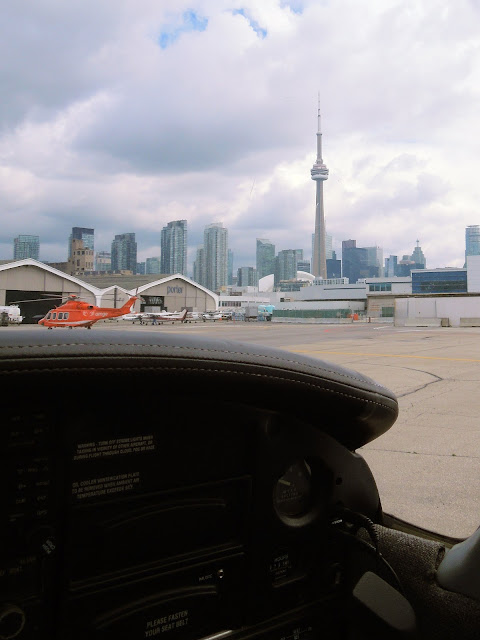 Crews and passengers of arriving aircraft are required to remain within their airplanes until cleared by customs. We had a brief moment of panic when our cell phones could not find signal, but they eventually woke up and locked on. I had a brief discussion with Canadian customs during which time I was issued a confirmation number and cleared onto Canadian soil. No one personally came to the airplane and, from my research, this appears to be very common for Canadian customs.


We had succeeded! No ATC deviations or international incidents!


Back To Where It All Began 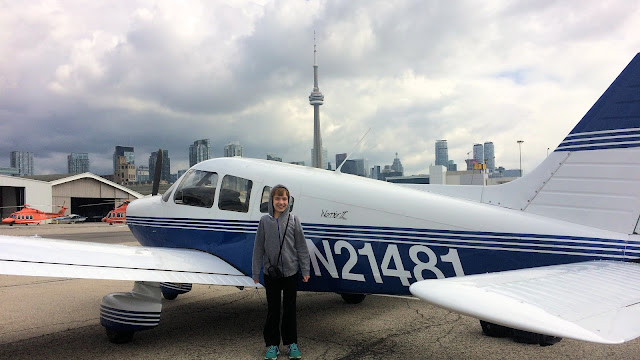 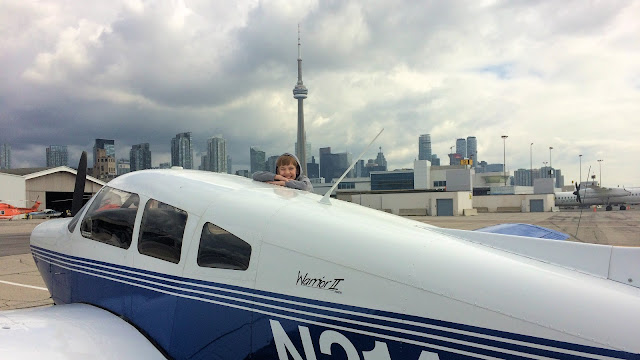 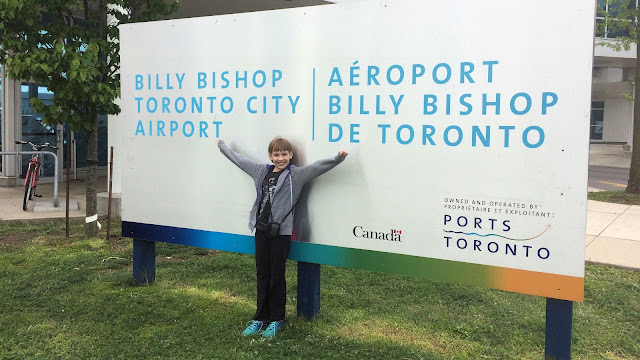 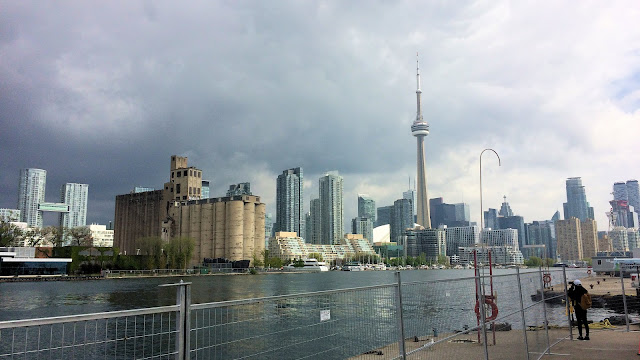 The mainland is reachable from the island airport either by ferry or a tunnel that runs under Lake Ontario. We took the tunnel and, suddenly, Kristy and I found ourselves back in Toronto, the city we'd first visited as college Freshmen years before. Much to The Bear's consternation, the old private jokes began zipping back and forth. Our college friends would have found it hilarious. The Bear did not. 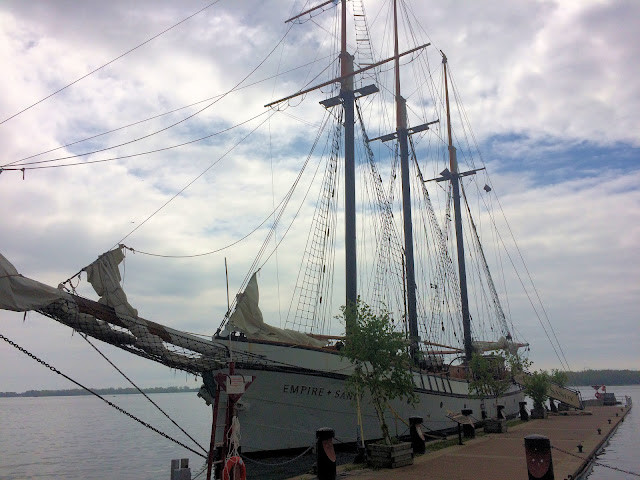 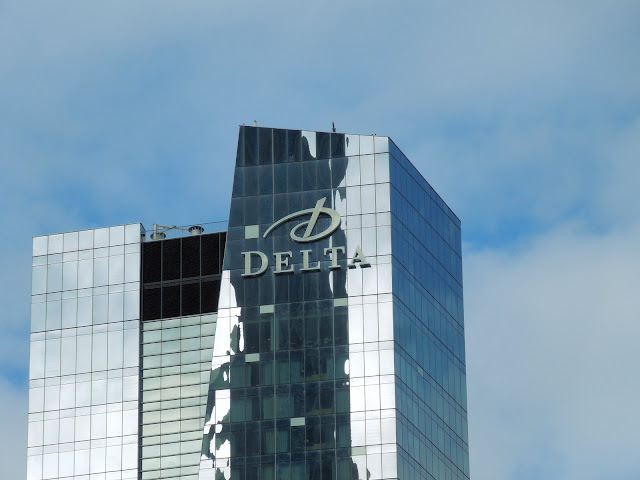 We reached the Delta Toronto Hotel after a brisk walk along the waterfront. Our room was spacious, modern, and well-appointed. As The Bear was quick to note, it was the exact opposite of the last hotel room we had in New York City. She is a worldly Bear, after all.

Are Alex or Geddy Home?

Toronto is a vibrant city with a lot to see and do. Unfortunately, The Bear's numero uno pick for family activity was the Toronto Zoo, which we discovered to be closed indefinitely owing to a strike. There were many tears over this, but we carried on nonetheless. 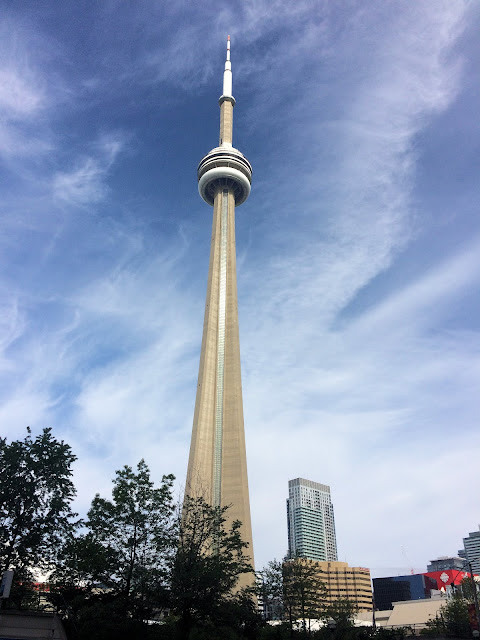 The CN Tower, Toronto's most unmistakable landmark, was next to our hotel. At 1815 feet high, it was world's tallest free-standing structure when completed in 1976 and retained that distinction until 2010. In 1995, the American Society of Civil Engineers declared it one of the Seven Wonders of the Modern World along with the Empire State Building and the Panama Canal. 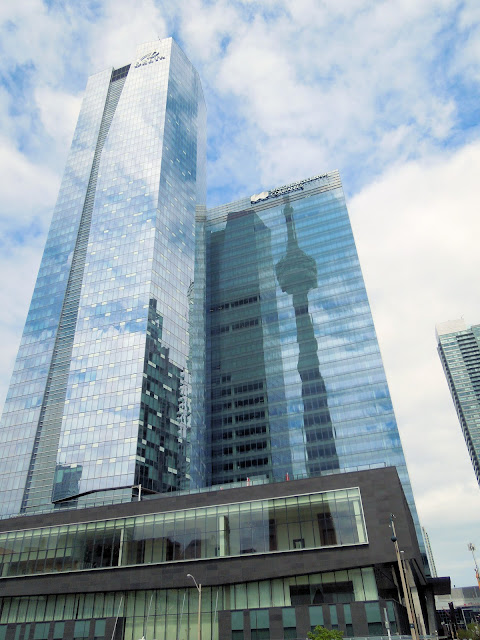 In fact, the tower is so massive and distinctive, it is practically visible everywhere one looks. 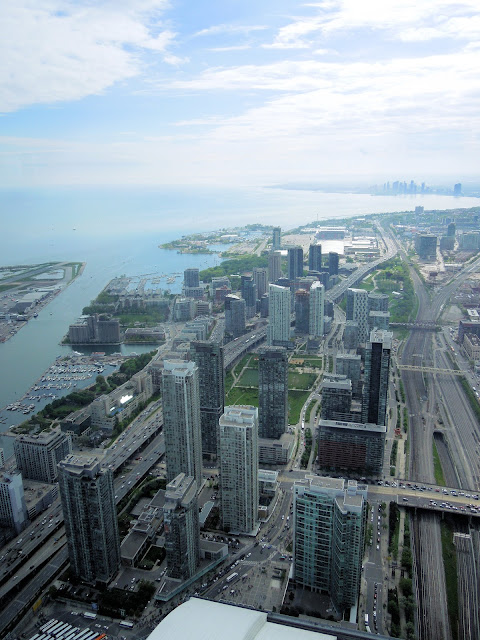 The observation deck provides a grand view of the city. 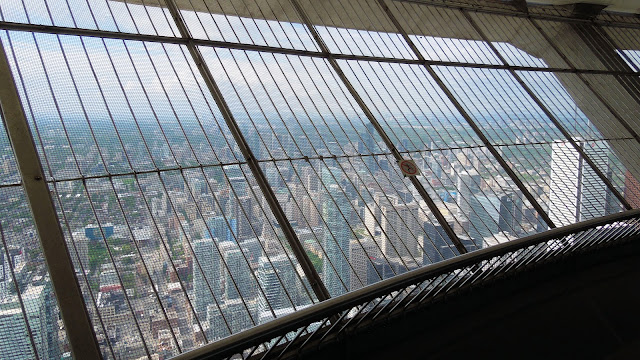 While maybe providing effective mitigation against the extremely clumsy or suicidal, this screen did little to enhance the view. The last time I stood on the outdoor observation platform was on a cold, February night in 1990 while the wind howled and the footing was treacherous on the icy deck. 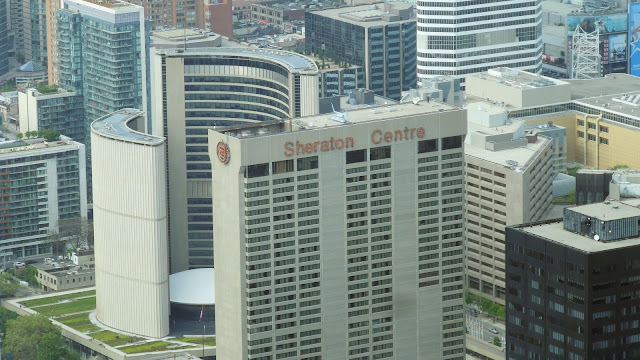 The Sheraton Centre, where Kristy and I stayed with our classmates on that fateful college trip, was the site of the infamous "wicked butter" incident. The hotel was close to Yonge Street where my friends and I explored multiple record stores, including the iconic flagship store of Sam the Record Man. The store was visible from blocks away because of a massive facade featuring two vinyl discs rendered in flashing neon. 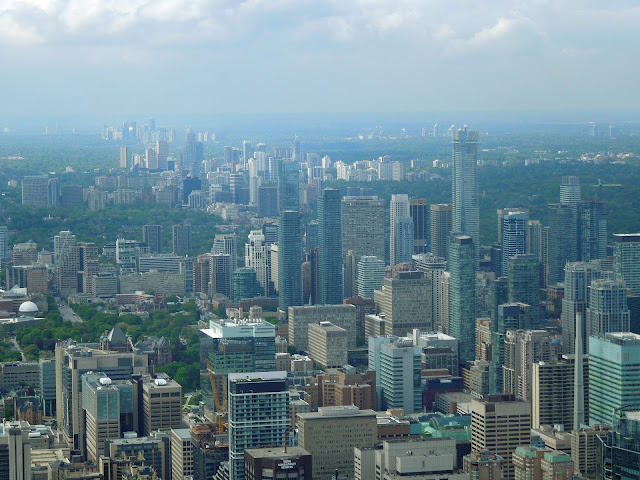 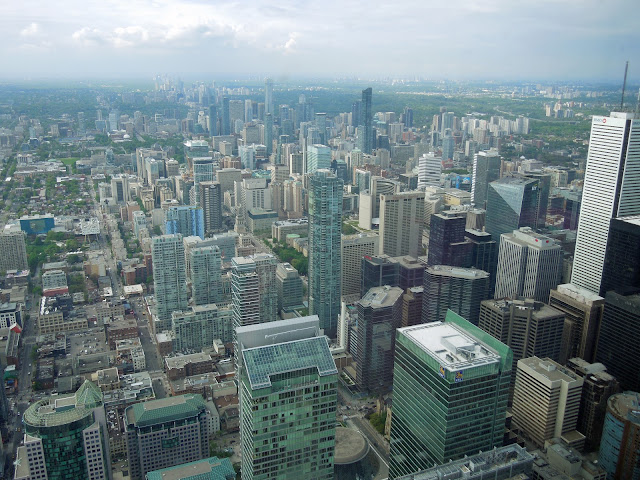 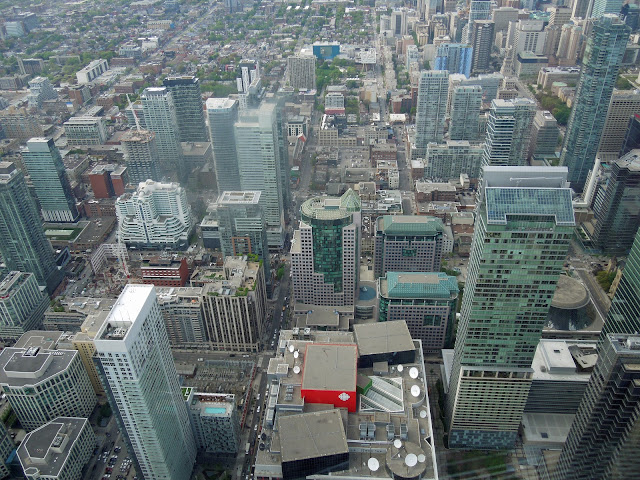 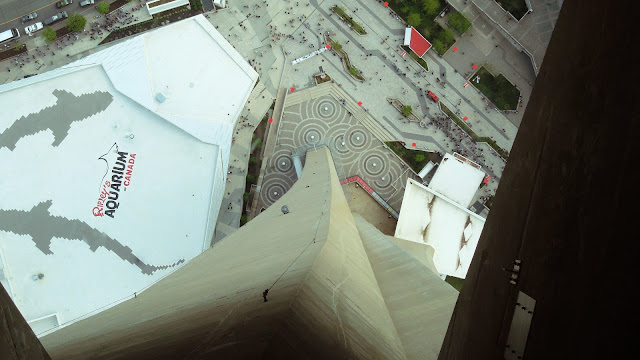 "Vertigo: a sensation of whirling and loss of balance, associated particularly with looking down from a great height..." (citation: Google).

The glass floor was installed in 1994.

Egad. The thought of standing on this glass floor immediately liquefied my insides. 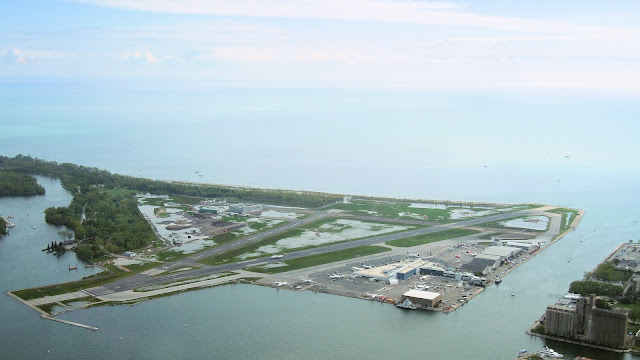 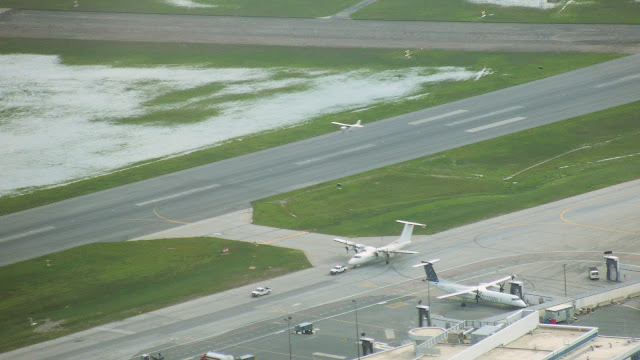 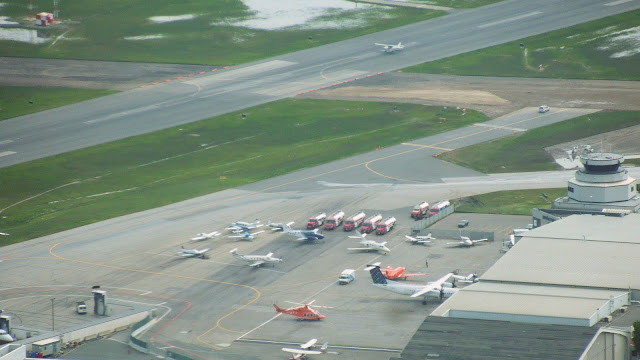 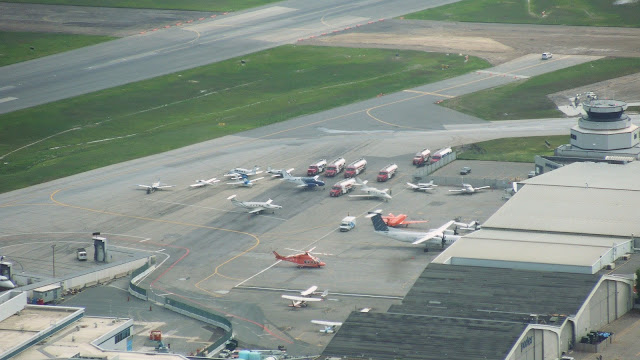 To my surprise, my photos from the CN Tower caught Porter in the act of repositioning Warrior 481. I inspected the nose wheel fairing carefully the next day. There were no scuffs, so Porter gets high marks from me for their handling of my airplane.


"Where are the dinosaurs?" Kristy set up The Bear to mock me and my friends for mistaking Toronto's Parliament Building for the Royal Ontario Museum and bursting into the quiet facility demanding to know where the dinosaurs were.

We probably reinforced some people's stereotypes of Americans being loud and crass that day.


Eaton Centre was the biggest mall I'd ever seen in 1990. It probably still is. It was just so...vertical.

Dinner was at The Loose Moose, a popular local pub around the corner from our hotel and one that we discovered years ago as college students. We ended the evening with a swim in the Delta Toronto's fourth floor pool. Windows on two and a half sides showed the cityscape around us, dominated by the massive pylon supporting the CN Tower. The Bear was in little swimmer heaven.
Logged by Chris on Saturday, May 27, 2017