But, What about Snowmageddon?!
This weekend, the cities of Buffalo and Watertown, NY were predicted to experience potentially record-breaking lake effect snowfalls. Because I am blessed with a number of thoughtful friends and family, I received several inquires about how we were faring here in Rochester, NY.
While Buffalo residents have been occupied with shoveling feet of snow, the view from my office window is of green grass that does not yet decided to go dormant. I am grateful for everyone's genuine concern.
Beyond that, these questions underscored for me how the lake effect snow phenomenon is poorly understood by many. It is not a simple matter of proximity to a huge (one might even say "great") lake, though that is certainly an key ingredient. However, geometry is also critical.
One of the wonderous properties of water, especially large bodies of it, is its ability to buffer temperature. It resists cooling when autumn and winter loom and resists warming as the pollen flies in spring. Land, on the other hand, rapidly undergoes temperature swings with the rise and fall of the sun and in response to the whimsy of weather. As a result, lake water is generally warmer than land this time of year. This is another important component of lake effect snow.
In the winter, especially early winter, an airmass moving across the water tends to warm and pick-up moisture. On reaching much colder land, that moisture-laden air cools and snow ensues. This is the crux of how the lake effect snow machine works. Considering that prevailing winds blow from the west, the siting of Buffalo and Watertown on the eastern shores of Lakes Erie and Ontario, respectively, makes them excellent candidates for frequent lake effect snow.
Rochester, on the other hand, is positioned south of Lake Ontario such that lake effect only impacts the city when there is a northerly component to the wind direction. Similarly, Chicago and Detroit tend not to experience lake effect because an easterly wind is required for those cities to be downwind of their respective lakes. This is not to say that Rochester does not experience lake effect snow. It does, but only when the wind reaches the city after crossing Lake Ontario.
Because the most recent winter barrages both west and east of Rochester were driven by southwest winds, we were spared the fate of our sister Upstate cities. This time.
All of this meant that, despite snow disaster areas to the west and northeast, I had a window of opportunity to fly somewhere. After recent weeks of not flying, I was eager for some freedom.
New Optics

With calmer weather to the east, I chose Harriman and West Airport (KAQW) in North Adams, MA as a destination knowing that lunch at the Trail House Kitchen would hit the spot. Time was limited; I wanted to be in a western Rochester suburb by 3:30 for an honor band concert that The Bear was playing along with other top band students from the surrounding eight counties. 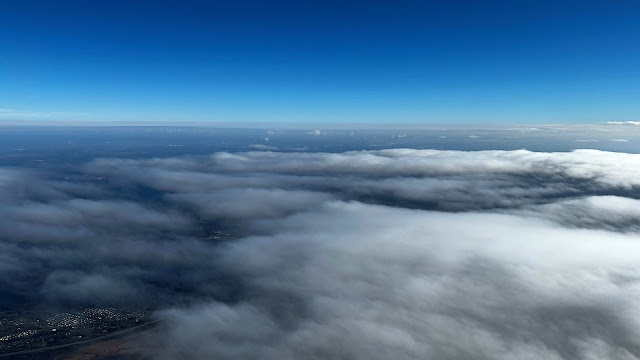 Over the years, I have favored digital still cameras over cell phones for aerial photography. This is mostly because of the image stabilization, resolution, and optical zoom capabilities of the still camera.
However, I recently upgraded to an iPhone 14. I am not one of those people who needs the latest and greatest device. As a case in point, I went from a flip phone to an iPhone 5S. This time, I moved up from an iPhone 8 because Verizon was offering significant trade-in value for my well-used older model phone whose battery was starting to show its age. The guy at the store was stunned that it had no scratches or cracks. 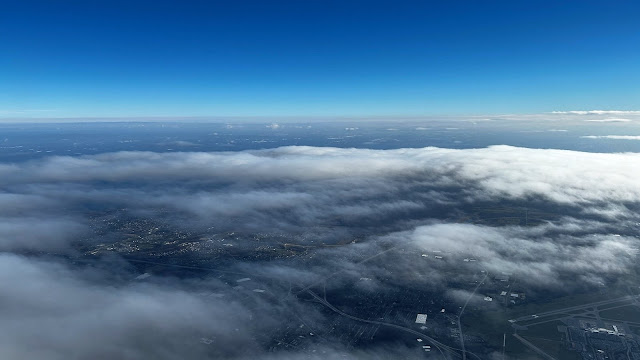 My point is that the iPhone 14 camera is a significant improvement over the 8's. While my still camera still wins for high-zoom photos, all the pictures in this post were taken with the 14. (Except for a few ground shots recycled from earlier this spring.)

When the meowing began on Guard, someone summarized what most people on frequency were probably already thinking. "Idiots," he declared.

Almost Tolkienesque
Harriman and West Airport sits in a valley among the Berkshire Mountains of northwest Massachusetts. As I dropped into the valley over a ridgeline west of the airport, the place seemed almost cloistered among the peaks. A secret refuge surrounded by natural stone walls, almost reminiscent of Rivendell without the fantastic architecture and ethereal music.
Landing here is not for the faint of heart on a windy day. But I left the gusty winds behind in central New York and received only mild buffeting at I entered a right downwind for runway 29 over the rapidly rising slope of a mountain to the north.
Taylor Brothers Bacon Burger...An Aviation Connection?

Trail House Kitchen is a brief walk north and west of the airport. I was the first customer of the day and Nate took my order promptly. I wondered about the Taylor brothers, namesakes of my bacon cheeseburger. It seemed unlikely that they were the same Taylor brothers who started building airplanes in Rochester, NY before moving to Pennsylvania only to eventually sell out to William Piper.
Nate returned with my food while I was still in the thick of flight planning the return trip in Foreflight. I enjoyed the delicious burger and fries, polishing off everything to an extent that stopped short of licking the plate clean.
"I see that you didn't care for it," commented Nate when he returned.
"Absolutely terrible," I confirmed, handing my plate to him.
Nate departed and, as the kitchen door swung shut, I heard him say to the cook, "I think he liked it..."
Vintage Cred
Because I had a schedule to keep, I did not loiter long at the airport after returning from lunch. 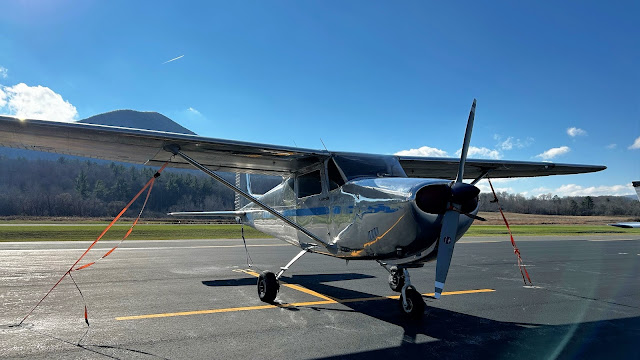 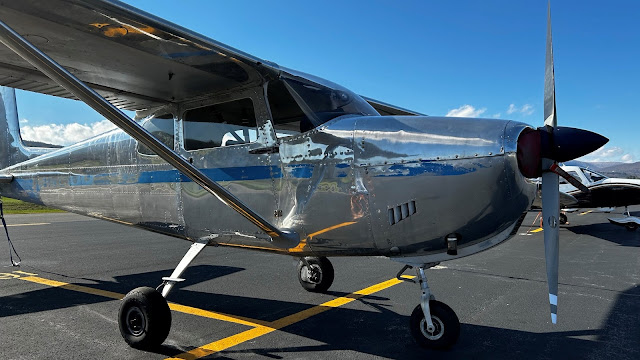 I liked the looks of this polished metal Cessna with excellent vintage cred parked next to me. 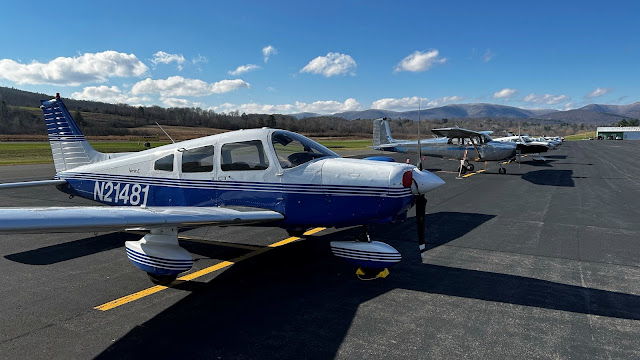 Warrior 481 bounced and shook in the increased wind during departure. I turned northwest from the airport and followed lower terrain out of the valley, eventually climbing high enough to cross the lightly snow-covered Berkshire ridgeline to the west.
Solace and Reflection 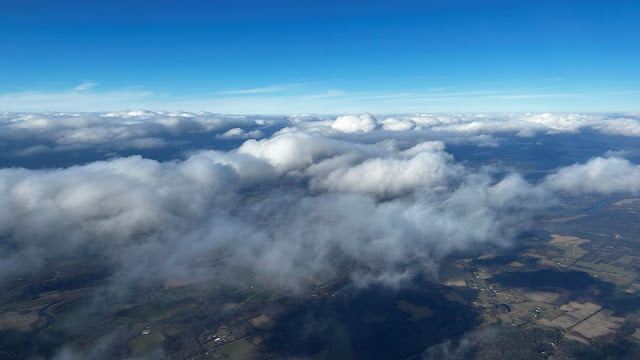 I cruised home over the clouds at 8,500 feet, pushing against a quartering 40 knot headwind. I set HAL to fly the Warrior home, pulled the mixture way back to lean of peak, and enjoyed a smooth ride across New York State. With a glorious cloud layer flowing beneath the Warrior's wings, the inspiring scenery was ripe for quiet contemplation interrupted only by the occasional directive from Air Traffic Control or an outburst from a "Guard troll". 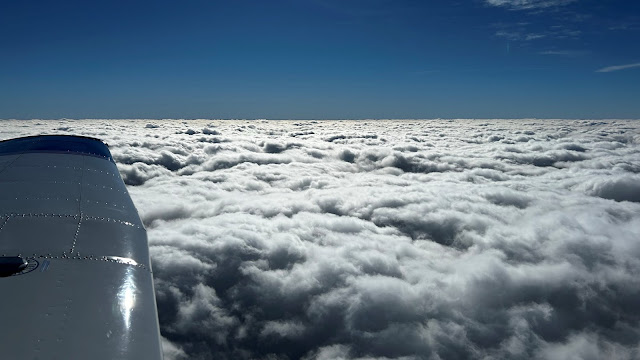 It was exactly the sort of flight that I needed in the moment.
West of Syracuse, I took advantage of a large hole in the cloud layer to start down toward Sodus. Wind at Sodus varied from six to twelve knots with gusts to nineteen or twenty out of the southwest. On landing, Warrior 481 hovered over the runway in a familiar dance, alternately settling and rising as gusts caused her to climb without control input from me. Patience is key. Arrest any upsets, maintain a landing flare, and let her come down. It was a suitably smooth landing on the mains and a good conclusion to a rare late season excursion out of state.
Portions of New York state being under a snow emergency could not take away from the beauty of the day. For those concerned about the weather we faced this weekend, I think we can safely consider it a non-event.
Who knows what future storms will bring? The geometry might not be so advantageous next time.
Logged by Chris on Saturday, November 19, 2022