A Fall Afternoon with The Bear


I have a Little Bear who likes to fly with me, but time and circumstance have prevented that from happening lately.

For Saturday, we agreed that any aeronautical adventure we pursued needed to involve pancakes.  My little girl loves her pancakes and I happened to know that the diner in Dansville, a twenty minute flight from Le Roy, served breakfast all day long.  Unfortunately, we were both famished before we ever reached the airport and decided to consume local pancakes, rather than defer gratification until Dansville.

While waiting for our food at the Gunsmoke Country Grill, we planned our flight.  Turns were definitely in order.  When I asked about turning to the right versus turning left, The Bear enthusiastically endorsed both directions.  We talked about how to pitch the airplane up and down and The Bear became very excited about trying her hand at that.  She also wanted to fly over the city and land at the "big airport" where all the jets landed (Rochester).  Working with air traffic control there would be good practice for me, too. 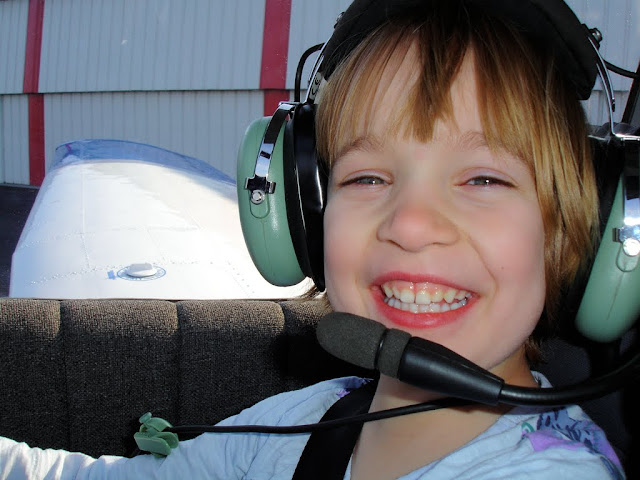 We embarked with great excitement (above).  After a run up, we held short of Runway 10 at Le Roy waiting for another aircraft to finish their practice on the VOR-alpha instrument approach.  The Bear asked more questions about previously unexplored instrumentation on the panel before her.  I asked The Bear to watch for an airplane crossing low over the airport at an angle from the southeast.  It would be coming from her side and she was better positioned to see it.  She spotted the Cherokee right away and we waited for it to turn onto the missed approach course before taking the runway.

"No sign of the mystery airplane," observed The Bear as we climbed into the sky.

"Sure, we don't know who they were!" she answered, referring to the Cherokee practicing on the VOR-alpha approach earlier. 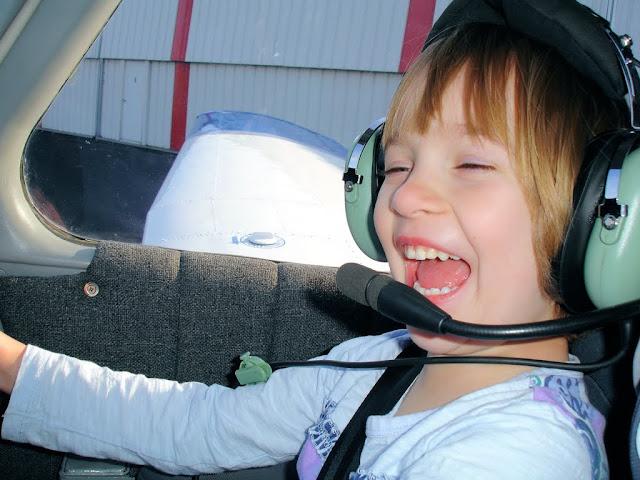 As we were still climbing, The Bear commented, "with all those pancakes I just ate, I'm not sure that I have room in my belly for pancakes from Dansville."

"We're not going to Dansville for pancakes, sweetie.  We decided to eat before we flew instead."  Clearly, we had a failure to communicate.  Understanding on The Bear's part was quickly followed by a complete meltdown.  Evidently, she REALLY wanted to go to Dansville.

Wings pointed toward the Earth always seem to cheer up The Bear.  I did a few steep turns in the hazy air northwest of Rochester.  Halfway through the first one, The Bear had already pulled herself out of her emotional nosedive.  When she had herself back under control, I suggested we fly into Rochester.

At this point, I became busy with an approach controller who was rather busy himself.  We were told to expect Runway 25 and asked to fly on a due east heading to pass north of downtown Rochester. 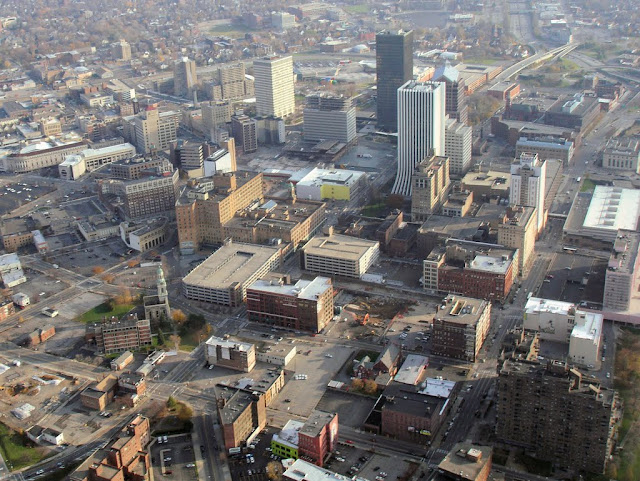 We were invited to enter a left base for Runway 25 as we crossed the Genesee River.  After verifying with the controller that he actually meant a right base, we turned southeast and crossed right over the middle of downtown at 2000'.  It was the closest I had ever flown to the city of Rochester.  Had we been just a little further west, we would have had a tremendous view of High Falls, but they passed unseen beneath the Warrior's belly. 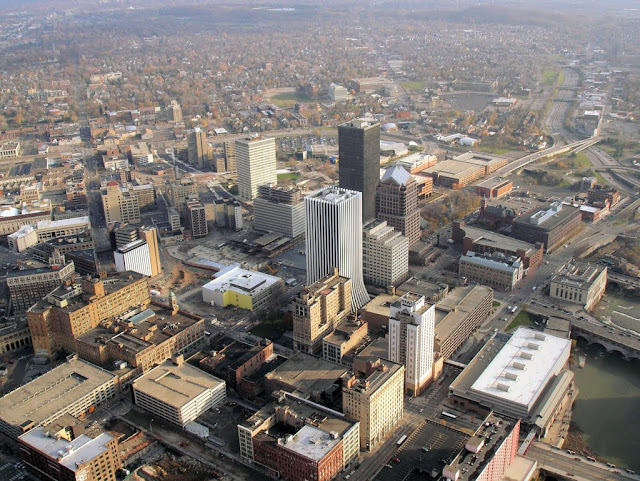 The buildings seemed close enough to touch.  These photos were taken without optical zoom or cropping. 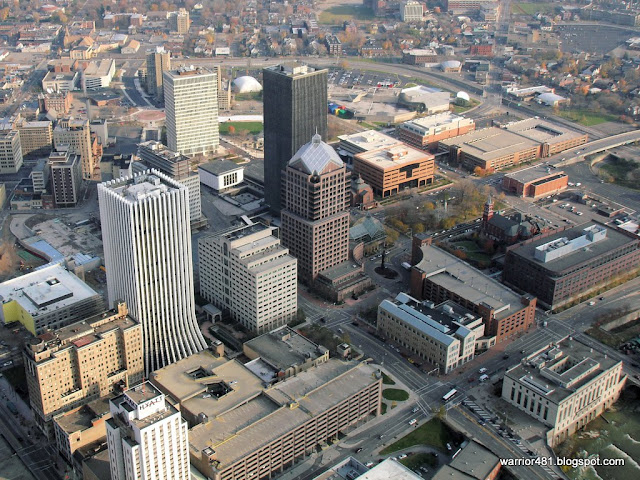 Over the heart of downtown, I had visual contact with the Cessna that we were supposed to follow to Runway 25.  As we turned final for Runway 25, we were closer behind the Cessna than I had originally intended.  I slowed the Warrior down as much as I dared just before Rochester Tower called.

"Cherokee 481, that Cessna will be full stop.  Runway 28 is available."  I turned to look.  The runway threshold was directly off my right wingtip and we were rather high.  I accepted the challenge and we were cleared to land.

We came in with power off, full flaps, and a bit of a slip.  The commercial terminal was ahead and to our right.  "Look, little Bear, we're landing at the big airport where the jets land."

The Bear did not respond.  She was sound asleep.

I knew we shouldn't have eaten before flying!

On short final for Runway 28, The Bear slumped over on top of me.  I flew the airplane with my left hand and maneuvered my unconscious daughter back into her seat with my right.  The landing was a greaser.

On the roll, we were told to make right traffic for Runway 28.  Abeam the threshold, Tower cleared us to land, then retracted the clearance and asked us to extend our downwind for traffic landing on Runway 22. 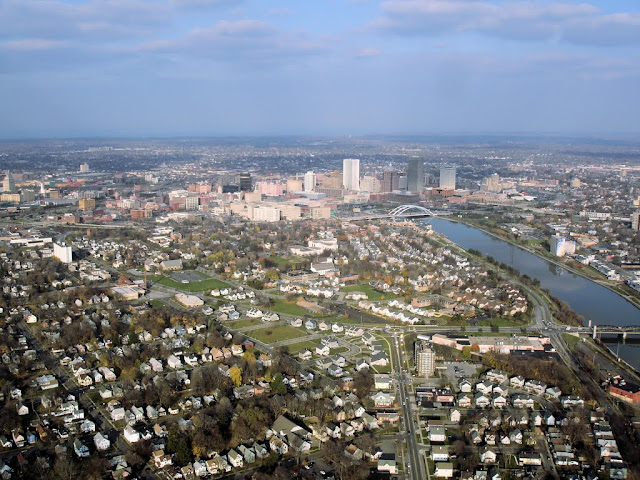 Just before we reached the river, Tower cleared us to turn right base at our discretion and to expect a landing clearance on final approach.  We did and it was another greaser.

Climbing away from Runway 28 again, Tower remained silent.  Just shy of pattern altitude, I decided to remind them of our presence.

"Cherokee 481 requesting one more touch and go and then we'll be direct Le Roy."

"Roger, November 481.  You can turn right or left, whatever you prefer.  In fact, no one is using 25 if you want to switch runways." 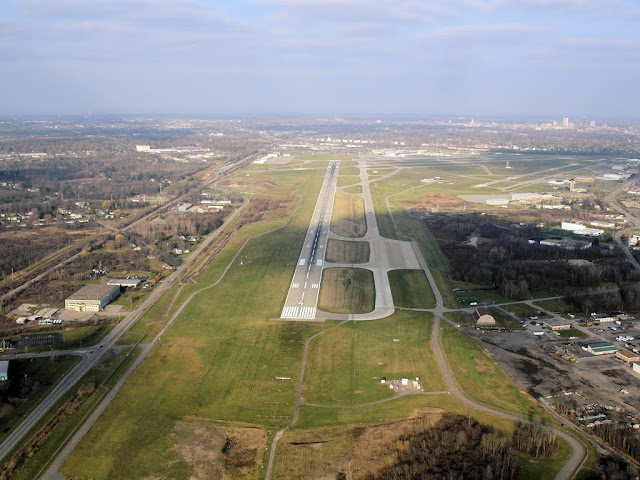 Tower approved.  We made a wide left turn to enter a downwind leg for Runway 25 just south of the Runway 4 threshold. 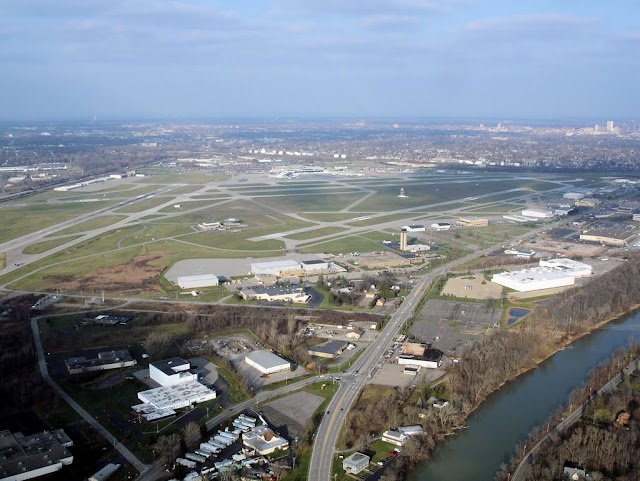 We negotiated the pattern, greased the wheels onto Runway 25, and launched again.  We were given a new squawk code, instructed to fly runway heading, and switched over to Departure.  Working with the tower was great practice for me after a few weeks of not flying, especially with the tower changing things up on me for each trip around the pattern. 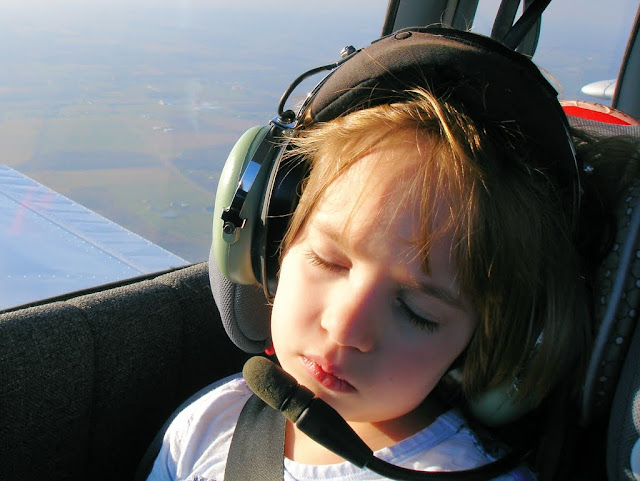 As we flew back toward Le Roy, The Bear was still sound asleep.  I felt terrible that she had slept through the landings at Rochester.  She had been so excited for us to land where the "big" (it is Rochester, so, hence the quotes) jets land.  How could I make it up to her?

"Little Bear, are you awake?" I asked.

No response.  I put my hand on her leg and shook her lightly.  "I was thinking that we could go to Dansville and get some ice cream."  She made no verbal response, but nodded slightly.  The neurons in charge of ice cream never sleep.

And, so, we found ourselves in Dansville eating ice cream.  Refreshed from her nap and abuzz with the effects of the ice cream, The Bear was quite a handful for the rest of the evening.

I asked her if she wanted to use the restroom there or wait until we got "home" (Le Roy).

"Ask me like 'shoot him now, shoot him now'," she exclaimed in reference to the classic Bugs Bunny / Daffy Duck short Rabbit Seasoning.  I did; it was wacky. 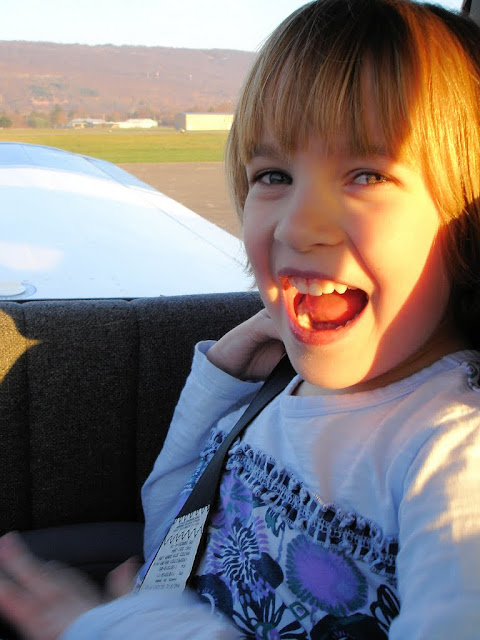 "What are you doing?" I asked her as we buckled our seatbelts in preparation to fly home.

"Playing the guitar, silly!"  She thrummed her shoulder harness for emphasis (above).

On the way home, The Bear studied the instruments closely.  "You're off course," she informed me when the GPS-driven CDI deviated a half dot left of center.  As a kid, I used read the speedometer and point out to my parents when they were speeding.  What was I thinking when I taught her to read the CDI?

Is it possible to be a "backseat navigator" from the front seat? 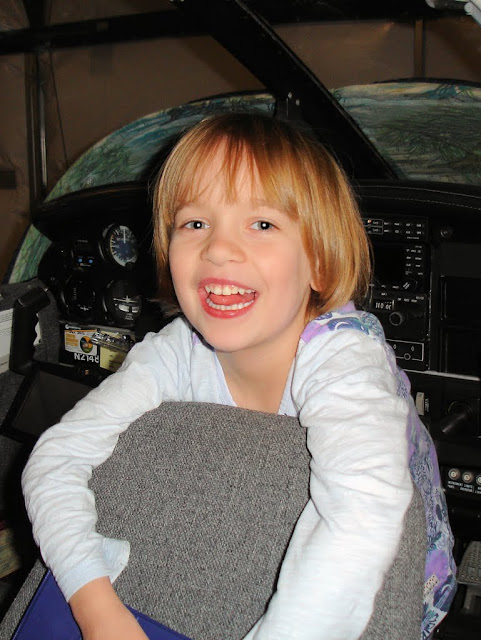 Back at Le Roy, with the airplane safely snoozing in her hangar, The Bear listened to me arrange dinner plans with Kristy.

"We're going to Bazil the restaurant?" she asked when I hung up the phone.

"Yes, as opposed to basil, the stuff we grow in the front window of the house."

"The restaurant's probably healthier than that basil," she opined.  The Bear loves fresh basil on her homemade pizzas and omelets.  Ergo, the yummy stuff was clearly unhealthy.

"Basil is way better for you than the ice cream you just ate," I informed her.

"Do you want to go flying again soon?" I asked, somewhat hesitantly.

Email ThisBlogThis!Share to TwitterShare to FacebookShare to Pinterest
Labels: Article, The Bear